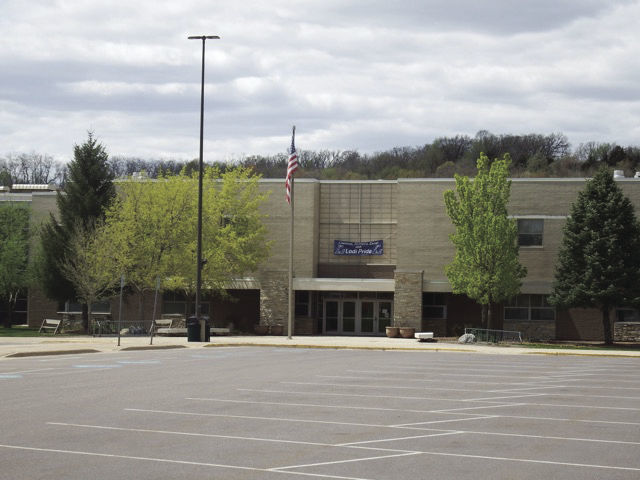 Lodi High School closed on March 16 due to the COVID-19 pandemic. Seniors won’t be allowed to enter the building until at least July 1, after which they will already be LHS graduates. 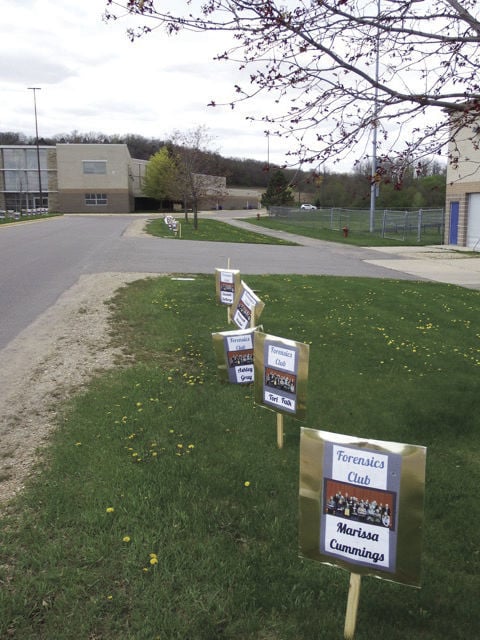 Handmade signs were made to honor the seniors and all their co-curriculars at Lodi High School. The signs lined the entryway for school. 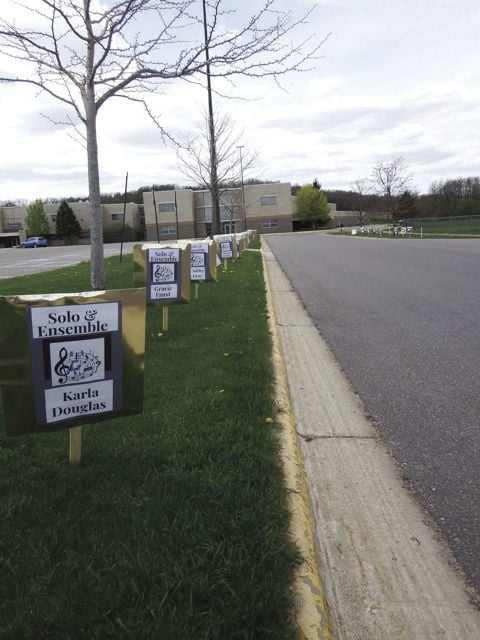 Above and below: Handmade signs were made to honor the seniors and all their co-curriculars at Lodi High School. The signs lined the entryway for school. 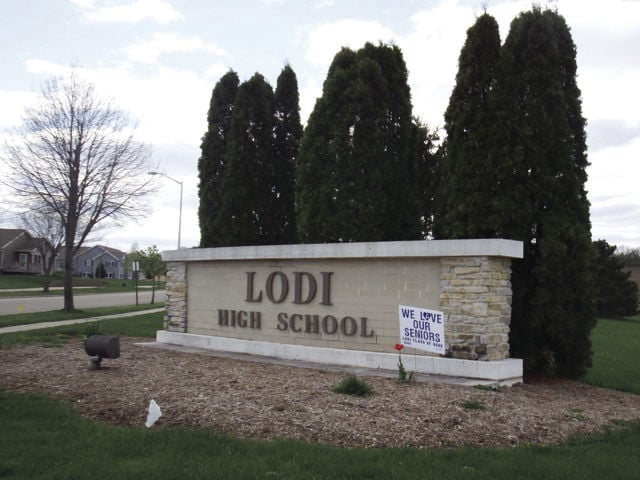 A sign that reads, “We Love Our Seniors”, honoring the Class of 2020 is placed at the Lodi High School entrance. The school has been closed since March 16. 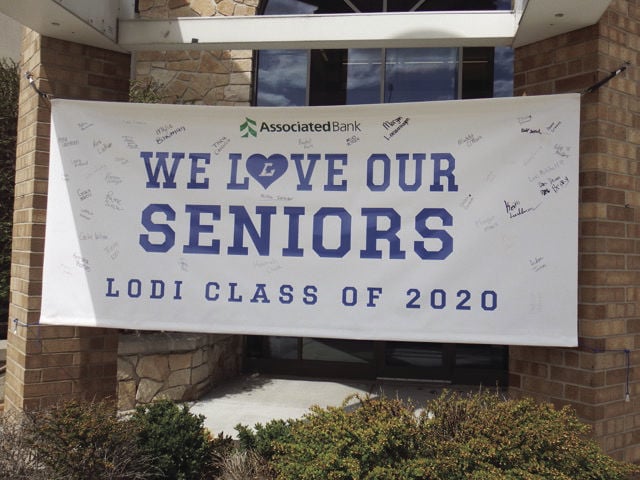 A banner outside of Associated Bank in downtown Lodi shows appreciation for the Class of 2020 at Lodi High School. Seniors were encouraged to sign the banner.

Lodi High School closed on March 16 due to the COVID-19 pandemic. Seniors won’t be allowed to enter the building until at least July 1, after which they will already be LHS graduates.

Handmade signs were made to honor the seniors and all their co-curriculars at Lodi High School. The signs lined the entryway for school.

Above and below: Handmade signs were made to honor the seniors and all their co-curriculars at Lodi High School. The signs lined the entryway for school.

A sign that reads, “We Love Our Seniors”, honoring the Class of 2020 is placed at the Lodi High School entrance. The school has been closed since March 16.

A banner outside of Associated Bank in downtown Lodi shows appreciation for the Class of 2020 at Lodi High School. Seniors were encouraged to sign the banner.

The Class of 2020 is certainly having a year to remember.

The school year began like any other, with the only exception being the students were in their final year within their respective districts. For six months, things continued as normal — participating in sports and co-curriculars, along with all of the other typical high school senior things.

Then everything changed within the final months of their high school careers.

On March 16, schools across the state — and country — closed due to the COVID-19 pandemic, but districts remained positive about reopening before the end of the academic year.

“Initially, it was mostly disappointment and sadness, but we were still real hopeful,” Lodi High School senior Elizabeth TenBarge said.

Classmate Zach Potter said he was busy with school work and didn’t have a chance to internalize what was initially happening, and all the changes that were coming forth.

“At the time, it just seemed like another challenge or problem that needed to be overcome,” he said.

Then just a short time later, it was announced that all school buildings would be closed indefinitely. TenBarge said it was “disheartening” for her when the Mock Trial state championship was cancelled, then the forensics competition followed. She’ll miss out on interacting with the rest of her bandmates as well as the meetings of science club and book club.

“(Mock Trial state) was the first thing cancelled and the one thing I was looking forward to all year,” Cummings said.

The pandemic cancelled everything.

There were no sports, but also no school activities or events of any kind. Potter, who missed out on his senior season of track, is also a member of the math team and the National Honor Society. He said the thought of missing out on everything “hit him at once” while taking pictures in his cap and gown for an upcoming graduation video.

Cummings was upset with the cancellations at first, but knew she couldn’t do anything to change the outcome. She has accepted the fact of her senior year ending the way it is and is keeping a positive attitude.

But seniors, and other grades alike, could no longer see their classmates on a daily basis and share laughs with each other. The face-to-face interactions were no more.

“I miss the conversations with my classmates. Whether it be about school or sports or how on Earth we’re going to afford real life in the coming years,” Potter said, who also played football and wrestled for the Blue Devils.

Lodi senior Anna Salzman, who is a member of the color guard and dance team, added, “I miss seeing my friends at school the most. All of my closest friends are going separate ways after high school, and not having those last few months together isn’t ideal.”

For Lodi High School, the initial cancellation came before spring break, which at first gave the students a longer vacation. But during break came the announcement that all buildings needed to be closed until at least June 30.

“At first, I thought it was no big deal. I figured we would have a week off, and then things would begin to go back to normal,” Salzman said. “When we found out that we wouldn’t be going back, it was hard to cope with. It was very disappointing because the Class of 2020 has worked so hard for the last 12 years, and we don’t get the end that we deserve.”

While area students felt like they — or any other student — didn’t deserve this ending to the 2019-20 school year, they saw the bigger picture and realized why the decision had to be made — and made quickly.

“I’m definitely feeling much better about the situation now that some time has passed,” Salzman said. “The school is doing an amazing job of supporting the senior class through this hard time. I now understand why we have to stay home, and that makes it a little easier to cope with now.”

It forced the soon-to-be graduates to take a glance into the future a little sooner than they were anticipating. With everything put on hold, the only thing to do was to look ahead.

“It sucks because the big parts (of senior year) were cut short,” TenBarge said. “But what else can we do, but look forward to the future.”

Salzman was looking forward to her final music concert to close out her senior year, along with senior awards night and walking through the schools during graduation practice. But mostly, she’ll miss doing it all with her friends.

And when looking back, beyond the missed opportunities and experiences, students have come to see a greater appreciation for what they had.

“You don’t realize how much you miss (school) until you can’t go anymore,” TenBarge said. “I’ve enjoyed all my teachers more than I’ve realized now that I can’t sit in their classes anymore.”

Potter added, “Besides graduation of course, I was really looking forward to all of the excitement building up in the school, not just for the end of the year, but for the end of our 13-year journey with Lodi. I am also definitely missing events such as our Senior Class night and the class trip.”

Cummings, who plans to major in Forensic Psychology in college, has missed her AP Psychology class the most, along with her favorite teacher, Mr. Hauser.

“I think it’s important to remember that none of this takes away from all that we’ve accomplished over the years,” he said. “Just because it didn’t end the way we wanted it to, doesn’t mean all is lost.”

The Lodi senior class has created an Instagram page to add photos, especially of where each student will be attending college in the fall. The school district is also honoring seniors in “senior spotlight” posts on its Facebook page.

Poynette High School students were unable to be reached for this story.

Virtual learning to close out a high school career

Conducting the final few months of high school via a computer screen wasn’t ideal for anybody in the Class of 2020 at LHS.

“Virtual learning has its pros and cons. The most difficult part is not having an immediate response when something is confusing,” Salzman said. “In school, you can raise your hand and get help right away, but with virtual learning, you have to email and then wait for a response.”

But it was something that the students had to cope with quickly.

“Mostly out of necessity, everybody was on board quick,” TenBarge said of the switch to virtual learning. “The teachers have made sure we have everything we need and respond super-fast.”

The motivation factor for seniors also changed. TenBarge said her senioritis — which is traditionally a decline in motivation during the final year of high school because you know graduation is around the corner — “went away real quick” when things changed.

“Some students were saying that it has been hard to get motivated because they’re not in the building anymore,” TenBarge said. “But I think everyone has adapted and moved on. We’ve resigned to the fact that this is what it is, and we have to make the best of it.”