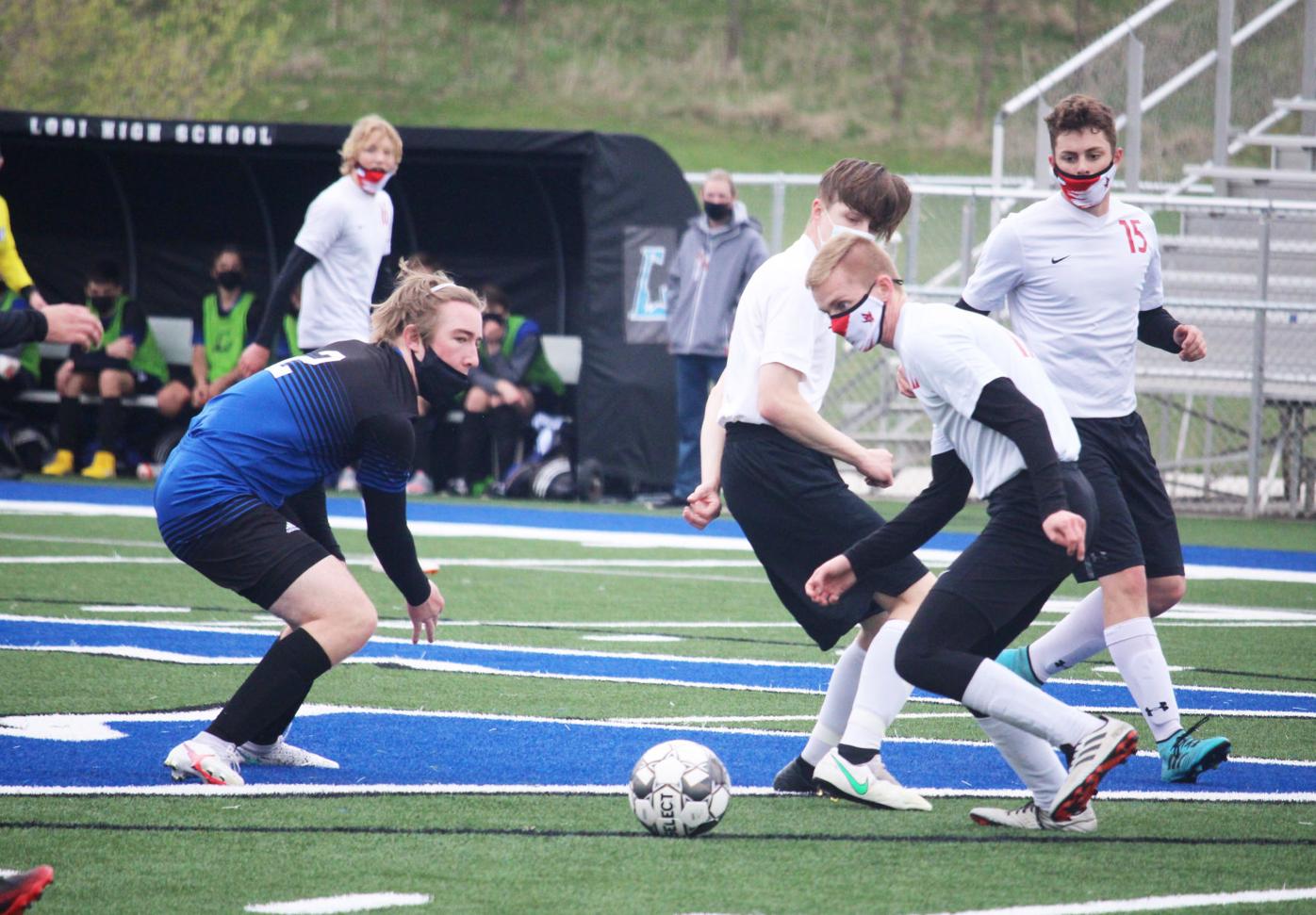 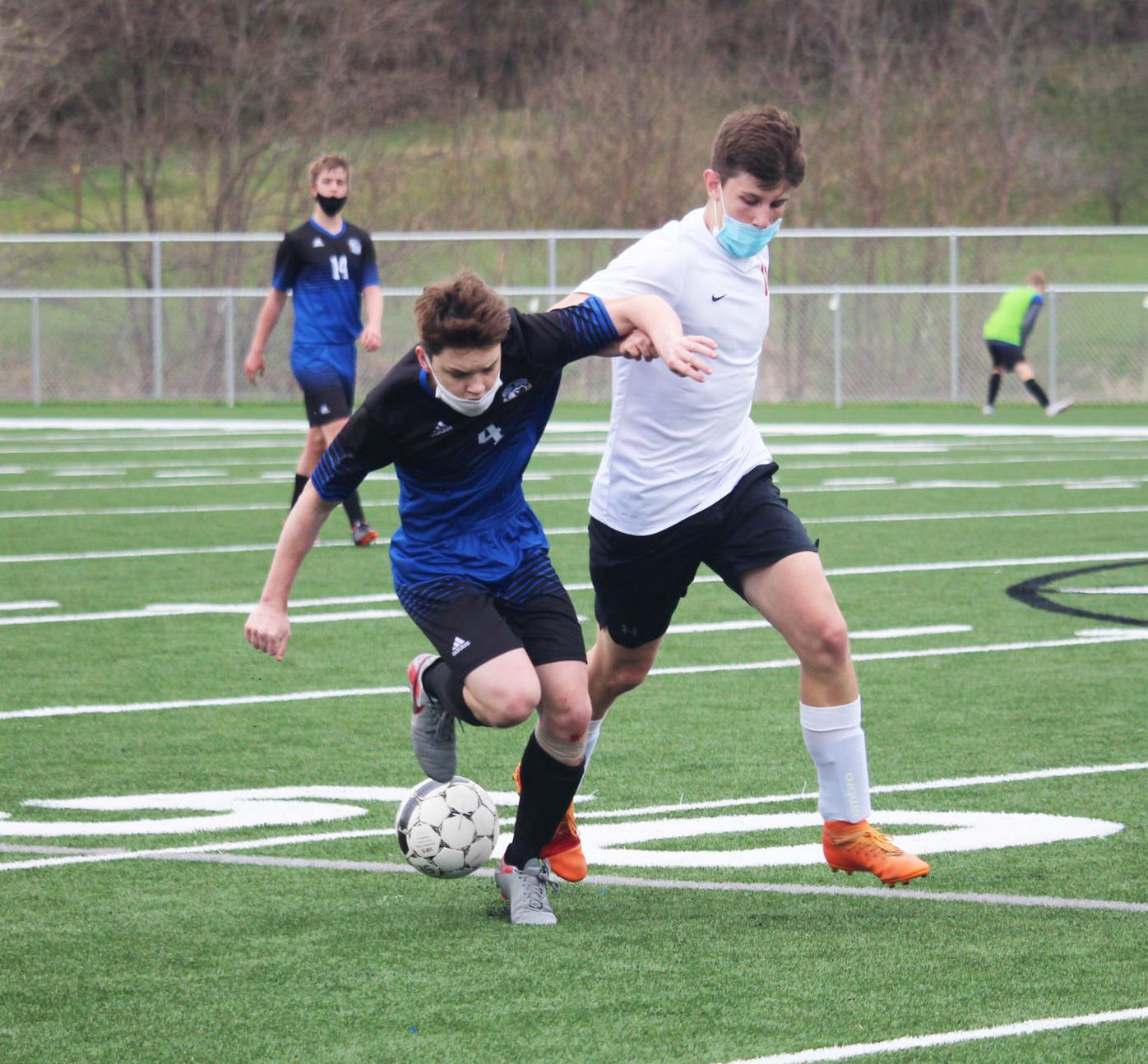 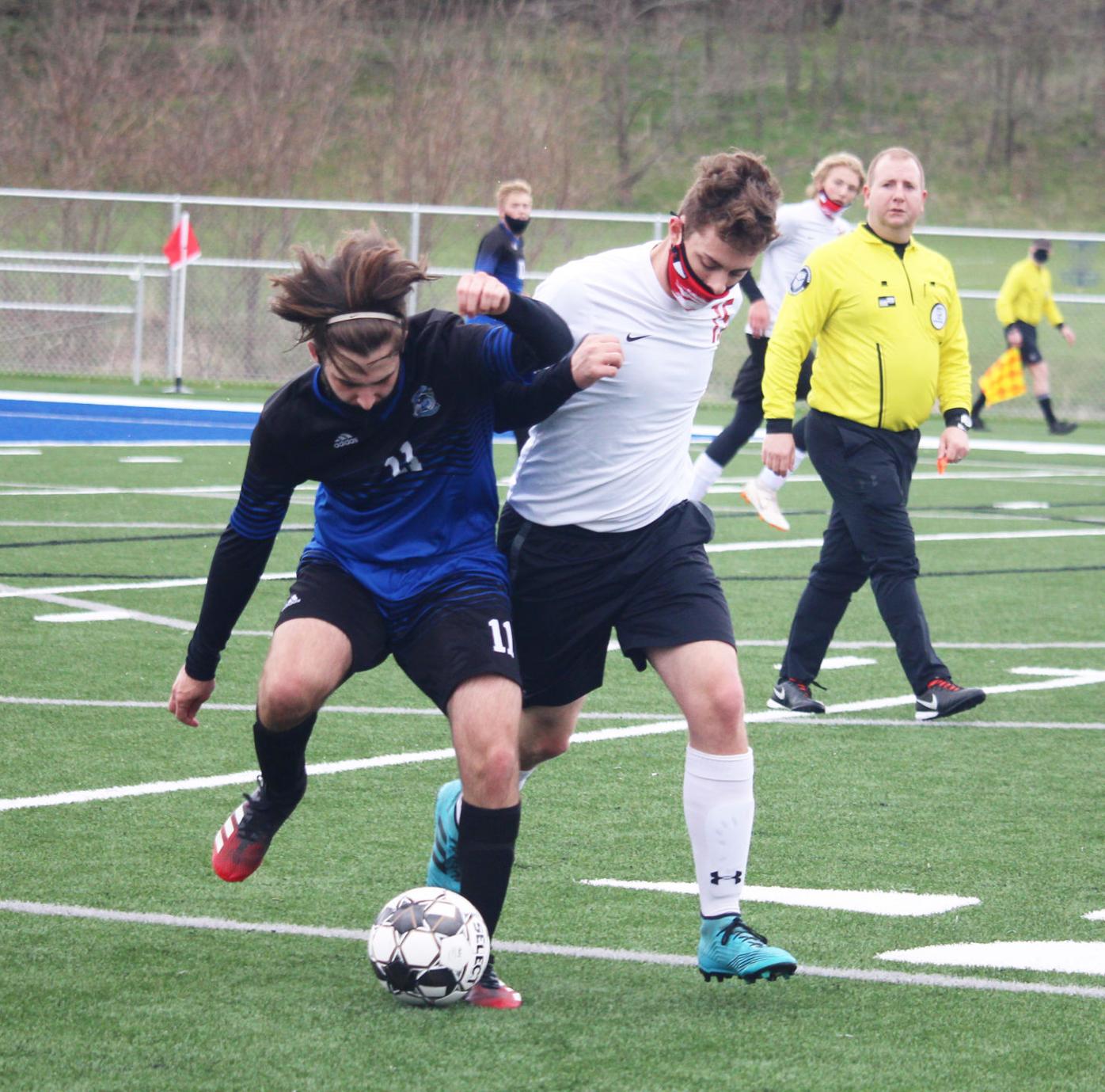 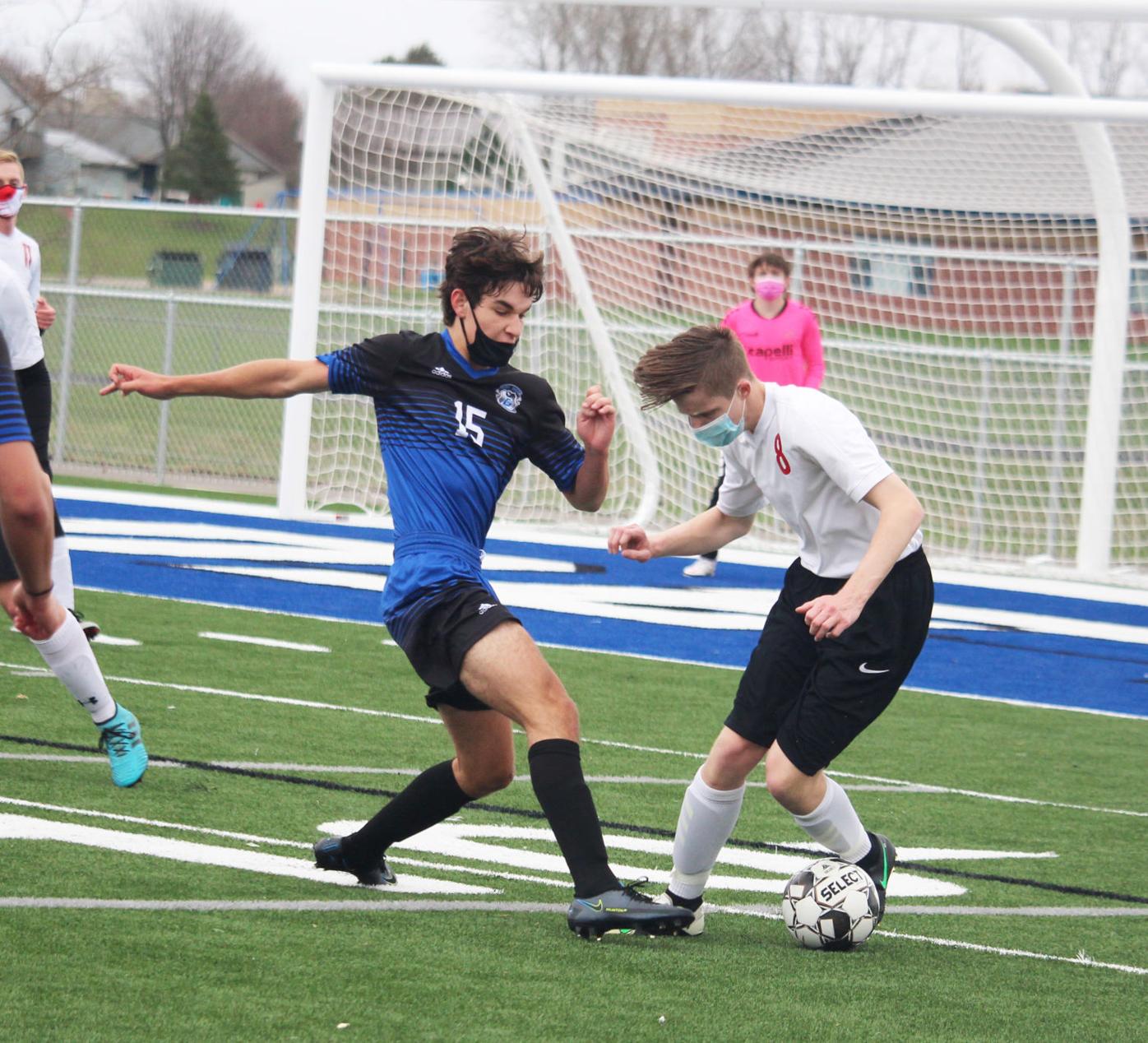 The Blue Devils’ Bailey Clark (left) and Columbus/Poynette’s Ian Reetz try to gain control of the ball in front of the Cardinals’ goal.

The Blue Devils’ Bailey Clark (left) and Columbus/Poynette’s Ian Reetz try to gain control of the ball in front of the Cardinals’ goal.

The Lodi boys soccer got its first opportunity to play on the new turf field at Blue Devil Stadium last week. The Blue Devils hosted a pair of Capitol Conference rivals.

Lodi had a tough start to the alternate fall season on April 8, as the Blue Devils were shut out by visiting Wisconsin Heights 3-0.

“Wisconsin Heights came out strong and scored all three goals in the first half,” Lodi coach Zachary Nelson said. “We worked off the rust and were able to keep the score at 3-0 through the second half.”

Last Saturday, the Blue Devils hosted the newly formed co-op of Columbus/Poynette. Lodi picked up its first win of the season after knocking off the Cardinals 5-1.

“We were able to settle down after our opening loss and play a better game,” Nelson said. “We will try to build off this game.”

The loss to the Blue Devils came just a few days after Columbus/Poynette garnered its first wins of the season. The Cardinals took care of visiting Lomira 6-0 on April 6 and edged visiting Cambridge 2-1 on April 8.

Columbus/Poynette is off to a 2-2 start this spring, while Lodi is 1-1.

The Blue Devils set the tone for the game with two goals in the first half.

Lodi got on the scoreboard just 1 minute, 18 seconds in on a goal by AJ Karls. Travis Parpart had the assist.

Erik Alsaker had an unassisted goal for the Blue Devils six minutes later.

Lodi increased the lead to 3-0 a few minutes into the second half with a goal by Bailey Clark. Brady Ziegler had the assist.

Columbus/Poynette scored its only goal a few minutes later, as Cole Wright put the ball in the net off an assist by Ian Reetz.

Lodi iced the game with late goals by Ziegler and Karls. Parpart assisted on the goal by Ziegler.

Blue Devil goalie Carson Richter came away with seven saves, while Quinn Meinholz had 11 for the Cardinals.

Wisconsin Heights put three goals on the board in the opening half and it was enough for the win.

The Vanguards opened their scoring with a goal by Gavin Childs at the 19:12 mark.

Then 11 minutes later, Childs assisted Cadeben Schomber on a goal to increase the lead to 3-0.

Richter finished the game with 10 saves.

The Cardinals broke open a close game with four goals in the second half.

Tony Genco led the way for Columbus/Poynette with a pair of goals, while Tyler Schluter, Ethan Hendrickson, Tyler Milewski and Otto Andler had one each.

Reetz and Milewski both had two assists for the Cardinals.

Meinholz and James St. Pierre both saw time in goal for Columbus/Poynette. They combined for two saves.

Columbus/Poynette scored both of its goals in the first half against Cambridge.

Nathan Koehler got things going for the Cardinals with a goal 5 minutes into the contest. Milewski had the assist.

Milewski scored off an assist by Genco late in the first half to put the Cardinals up 2-0.

Meinholz had 10 saves in the win.