Schulgen fought in the same city, Chateau-Thierry, as Merton Maynard in World War I. Although he was injured earlier in the battle and was taken to a French hospital, he died the same day as Maynard. 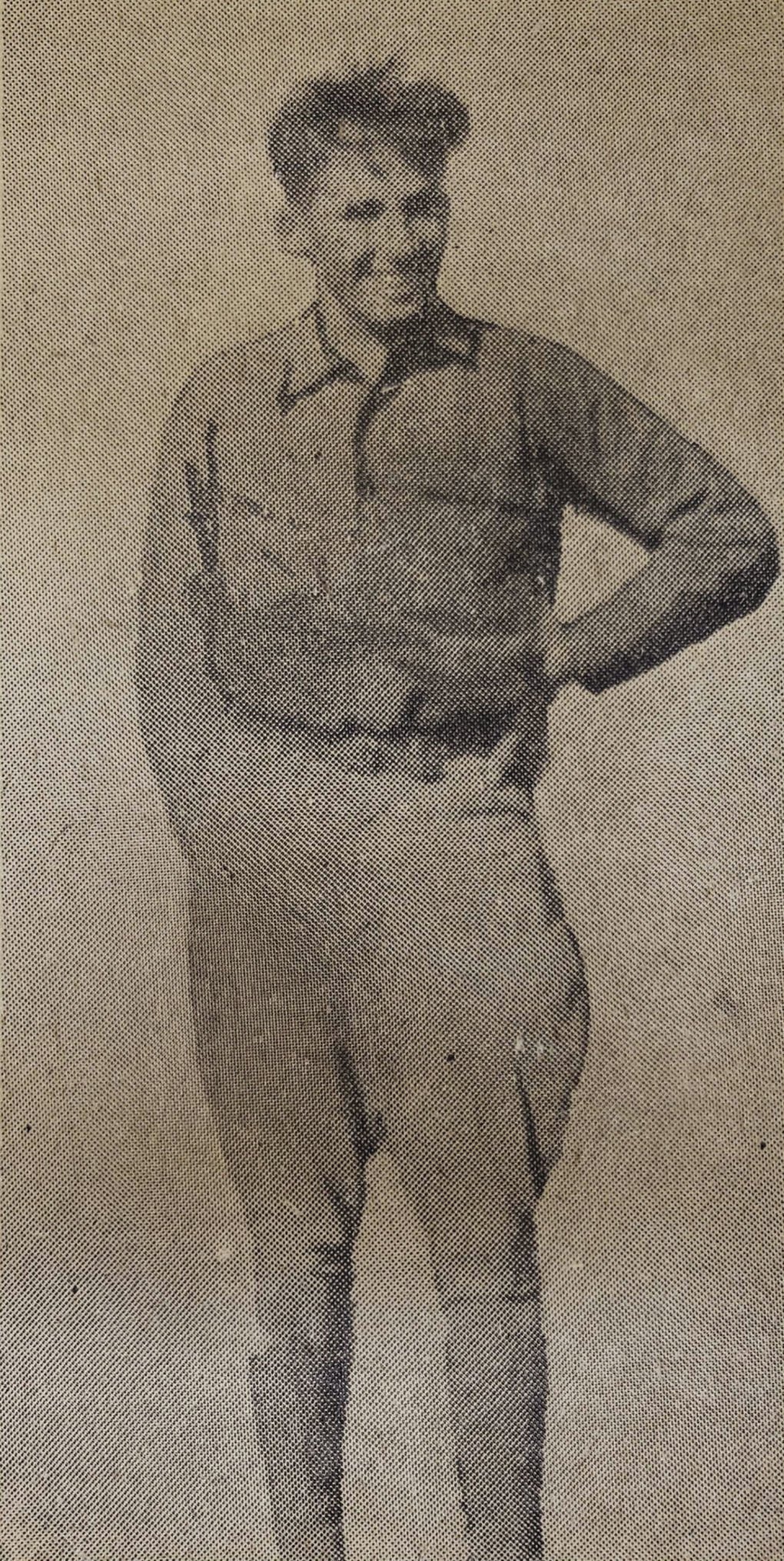 Being the first person from Lodi killed in combat in World War I, The American Legion Post 216 decided to name themselves after Merton Maynard in his honor when they were founded in 1919. 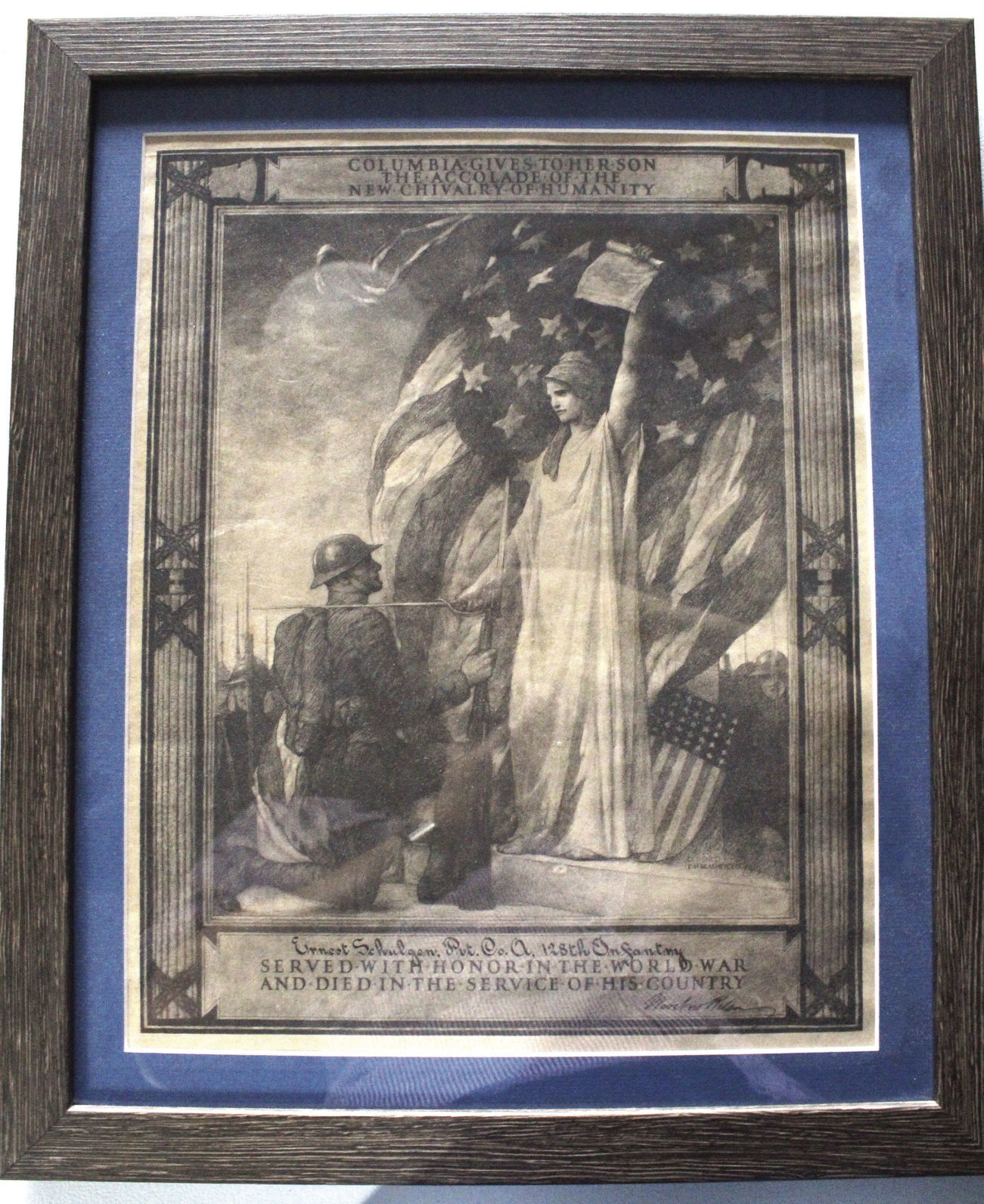 The certificate Schulgen’s family received after his death to commemorate his service during the war.

Schulgen fought in the same city, Chateau-Thierry, as Merton Maynard in World War I. Although he was injured earlier in the battle and was taken to a French hospital, he died the same day as Maynard.

Being the first person from Lodi killed in combat in World War I, The American Legion Post 216 decided to name themselves after Merton Maynard in his honor when they were founded in 1919.

The certificate Schulgen’s family received after his death to commemorate his service during the war.

The Lodi Maynard-Schulgen American Legion Post 216 turns 100 years old this year. Like many other Legion posts around the country celebrating their centennial anniversary, Lodi chose to name their post after local soldiers who paid the ultimate price when drafting their charter.

For Post 216, this would be Merton Maynard and Ernest Schulgen—two World War I infantry soldiers who died overseas. They were two of 10 casualties from Lodi that occurred during World War I, all whose names can be read on the memorial marker in Veteran’s Memorial Park in Lodi.

Paul Fisk, Lodi Post 216 adjunct, said although they are the namesake of Post 216, they weren’t much different than the rest of Lodi’s soldiers.

“They’re typical,” Fisk said. “Typical of Lodi. We had a lot of people enlist from Lodi. We had several wounded.”

Maynard and Schulgen are the only two from Lodi who died in combat. Their lives shared many similarities, as well as their subsequent deaths.

In the spring of 1917, he enlisted in the National Guard and joined Company A in Reedsburg on July 15, 1917. From there, he would go to Camp Douglas, Wisconsin and then to Camp MacArthur in Waco, Texas.

He was eventually sent east to Camp Merritt in New Jersey where he finished his training. In February of 1918, he got shipped off to France.

Maynard fought in Chateau-Thierry, France and was killed in action on Aug. 1, 1918 at 20 years old. Being the first — and only — Lodi resident to be killed in action during the war, the American Legion Post 216 decided to name their post after him in his honor.

He was originally buried in France but was brought back to Lodi in 1922. The Lodi Enterprise reported in 1922 that the Merton C. Maynard Post arrived at the train depot where Maynard’s body was delivered and escorted him to the Maynard home.

Maynard’s funeral procession was “lined on either side by school children from the grade tots up to those of the high school,” the Enterprise reported. He was buried at Mount Pleasant Cemetery in Lodi on May 1, 1922 with full military honors.

Schulgen was born Feb. 25, 1896. Much like Maynard, he was also an only son. He graduated from Lodi schools in 1916 and was reported as being a good athlete and well respected.

With Schulgen and Maynard both being from Lodi, they followed similar paths to the warfront. In April of 1917, Schulgen enlisted in the National Guard and left for Reedsburg to join Company on July 15. Afterwards, he mobilized to Camp Douglas before eventually arriving at Camp MacArthur in Texas.

After coming to Camp Merritt in New Jersey of 1918, Schulgen sailed for France on February 19 as a part of the 128th Infantry National Guard in the 32nd Division, which still exists today.

Schulgen found himself in the same city as Maynard, in Chateau-Thierry, France. In July of 1918 he was wounded by machine gun bullets through the hip during an attack on a machine gun nest.

He was taken to a French hospital but later died of his wounds on Aug. 1–the same day Maynard died.

Another Lodi resident, Lester Clark, wrote home about Schulgen’s death on Dec. 13. He said “the fighting men of Wisconsin and Michigan, soldiers in the 32nd Division, turned the tide of the whole war against the Germans near Chateau-Thierry.”

He said Elmer Byrns, a Lodi resident, was with him when he was wounded and saw him taken to the hospital but received no message from him as it was not considered at the time that his wounds were so serious.

“His comrades were all deeply grieved to hear of his death,” Clark wrote. “Ernest was always a true soldier and a good comrade. He was respected and loved by all his fellow soldiers.”

News hit home on Aug. 23 of Schulgen’s death. The Enterprise wrote that Schulgen’s death “not only wrung the [ears] of the bereaved family with anguish, but cast a gloom over the entire community. It brought the awful fact of the war to our own threshold.”

One week later, on Aug. 30, news of Maynard’s death was reported, a back-to-back blow to the Lodi community.

Schulgen was buried at St. Patrick Catholic Church. Schulgen’s parents would later receive a certificate for his service during the war. The Lodi American Legion Post would also go on to add his name to the post in the 1920s.