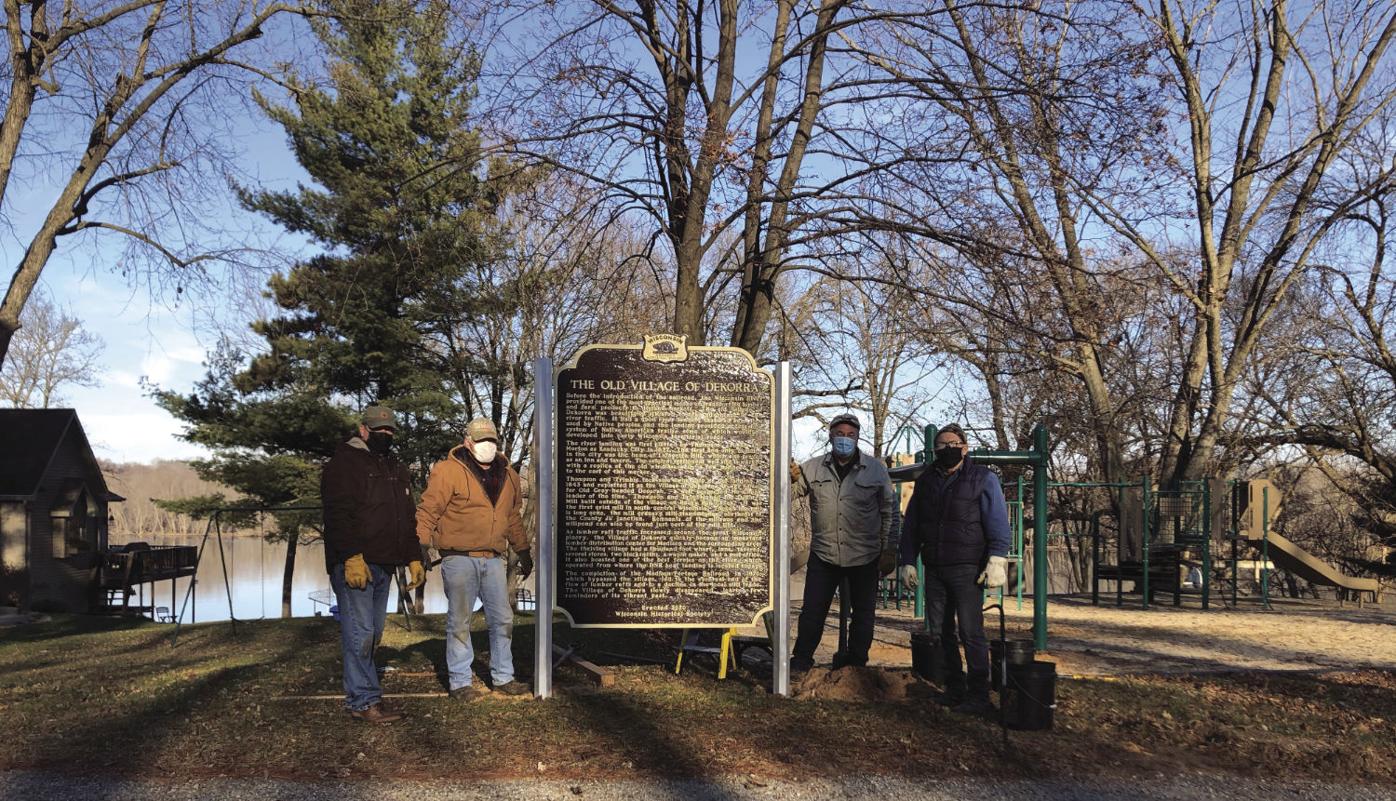 Volunteers pose near the just-installed historical marker in Dekorra Park in December. The project was through the Dekorra Parks Commission, as it wanted t highlight the history of the old Village of Dekorra. The marker is the state’s 591st, with the first installed in Peshtigo in 1951. 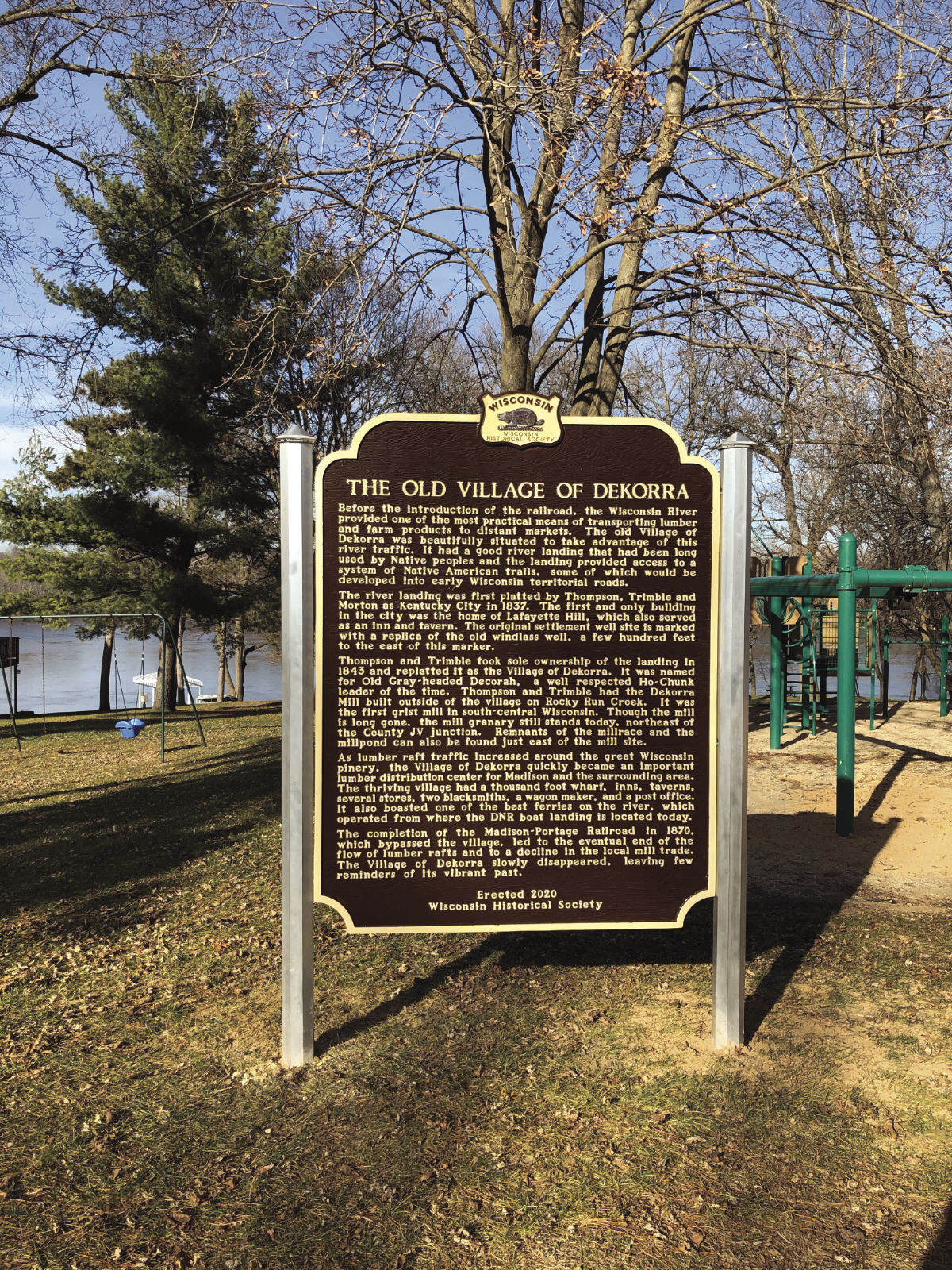 The official Wisconsin State Historical Marker in Dekorra Park is seen. The marker 591st in the state.

Volunteers pose near the just-installed historical marker in Dekorra Park in December. The project was through the Dekorra Parks Commission, as it wanted t highlight the history of the old Village of Dekorra. The marker is the state’s 591st, with the first installed in Peshtigo in 1951.

The official Wisconsin State Historical Marker in Dekorra Park is seen. The marker 591st in the state.

Official Wisconsin State Historical Markers are seen all across the state, whether they’re located off busy highways, near main streets of various town, villages or cities, or tucked away outside smaller municipalities.

They offer a brief history lesson for anyone who takes the time to stop and read them. The markers detail what used to be, or what still is, on or near that particular site.

Up until December, there were 590 official markers scattered across Wisconsin. In late December, the Town Of Dekorra was able to install No. 591, located in Dekorra Park on County Highway V.

The process to have the massive marker installed was not quick, and purposefully so.

Lybek took the lead on the project. That meant he would gather all the information about the old village’s history. All that work was necessary in order to be recognized by the state’s Historical Society, as Lybek had to include where all the information came from.

“It was like doing a college paper,” Lybek said. “You had to send in all the bibliography.”

The area around Dekorra, which was perfectly situated along the Wisconsin River, became integral as soon as it was platted in 1837 as Kentucky City. Lybek found through his research that the area was a good landing spot along the river and started out with Native American traffic. It was a land of extensive trails that led to the Madison area — a way for Native Americans to travel back and forth.

“You realize how important it was, it was a substantial road system to Madison,” Lybek said.

The land was re-platted in 1843 as the Village of Dekorra — named after respected Ho-Chunk leader Old Gray-headed Decorah. The area became even more important when logging along the river began, as rafts full of lumber would come to the site as an easy way to get to Madison.

“Many buildings in Madison used lumber that made its way through Dekorra,” Lybek said.

The village had just one building in 1837, then had the area’s first grist mill shortly later, adding to its importance. The grist mill would grind grain into flour. Lybek said that people from all over the state would come just for the grist mill. A wharf, stores, more inns and taverns, two blacksmith shops, a wagon maker, and a post office later inhabited the village.

From 1843-1869, the Village of Dekorra thrived. Then in 1870, the Madison-Portage railroad was completed, leading to the declining importance of the village.

Even after Lybek submitted his extensive research to the state’s Historical Society, they had to double-check the accuracy of his information in order for approval. Lybek estimates that it took about 18 months from the start of his research to when approval was given.

Then everything was sent off to Ohio so the marker could be made. Lybek said it took another three months after approval to finally have the sign delivered — which was done shortly before the first major snowfall during the 2020-21 winter months.

“We were hoping it would get there earlier, but we were lucky to get it when we did,” Lybek said.

Installation of the marker was completed in mid-to-late-December.

There are 20 official historical markers across Columbia County, including two in Poynette — the “John Muir View” (No. 29 was installed in 1955, which was the county’s first) on Highway 51, just south of the village limit, and the “Wallis Rowan and His Cabin” in Old Settlers Park. The Dekorra marker is the first for the small community.

“It’s a sense of pride for the community,” Lybek said of receiving the marker.

In full, the marker reads:

Before the introduction of the railroad, the Wisconsin River provided one of the most practical means of transporting lumber and farm products to distant markets. The old Village of Dekorra was beautifully situated to take advantage of this river traffic. It had a good river landing that had been long used by Native peoples and the landing provided access to a system of Native American trails, some of which would be developed into early Wisconsin territorial roads.

The river landing was first platted by Thompson, Trimble and Morton as Kentucky City in 1837. The first and only buildings in the city was the home of Lafayette Hill, which also served as an inn and tavern. The original settlement well site is marked with a replica of the old windlass well, a few hundred feet to the east of this marker.

Thompson and Trimble took sole ownership of the landing in 1843 and replatted it as the Village of Dekorra. It was named for Old Gray-headed Decorah, a well respected Ho-Chunk leader at the time. Thompson and Trimble had the Dekorra Mill built outside of the village on Rocky Run Creek. It was the first grist mill in south central Wisconsin. Though the mill is long gone, the mill granary still stands today, northeast of the County JV junction. Remnant of the millrace and the millpond can also be found just east of the mill site.

As lumber raft traffic increased around the great Wisconsin pinery, the Village of Dekorra quickly became an important lumber distribution center for Madison and the surrounding area. The thriving village had a thousand-foot wharf, inns, taverns, several stores, two blacksmiths, a wagon maker, and a post office. It also boasted one of the best ferries on the river, which operated from where the DNR boat landing is located today.

The completion of the Madison-Portage Railroad in 1870, which bypassed the village, led to the eventual end of the flow of lumber rafts and to a decline in the local mill trade. The Village of Dekorra slowly disappeared, leaving few reminders of its vibrant past.

According to the Wisconsin Historical Society, the markers tell the stories about events, individuals, buildings, or sites of national significance that contribute to the state’s rich historical heritage. They are excellent educational tools, informing people about significant aspects of Wisconsin’s past.

The first marker was installed in Peshtigo in 1951, entitled “Peshtigo Fire Cemetery,” which shares the brief story of the Oct. 8, 1871 Peshtigo fire — the same day as the start of the Great Chicago Fire. In Peshtigo, the once booming town of 1,700 was completely wiped out in one day. For comparison, the Chicago fire claimed 300 people over three days.

The official markers of the Wisconsin Historical Society are cast aluminum, have raised cream-colored letters on a tobacco brown background, and feature the badger — the state symbol of Wisconsin — embossed at the top of the marker.

A complete list, with locations and pictures of the all the state’s official markers, can be found on the Wisconsin Historical Society’s website at www.wisconsinhistory.org.