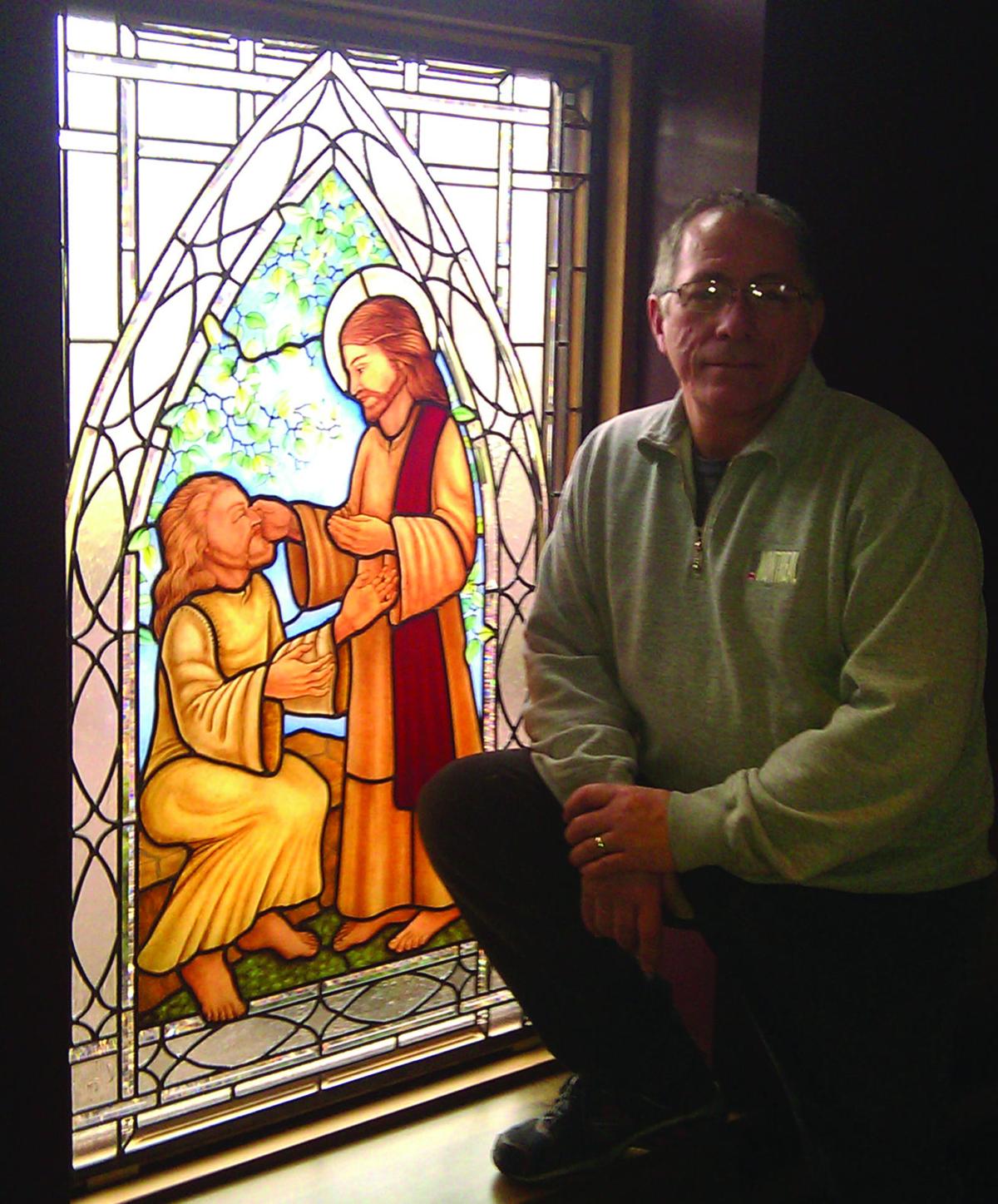 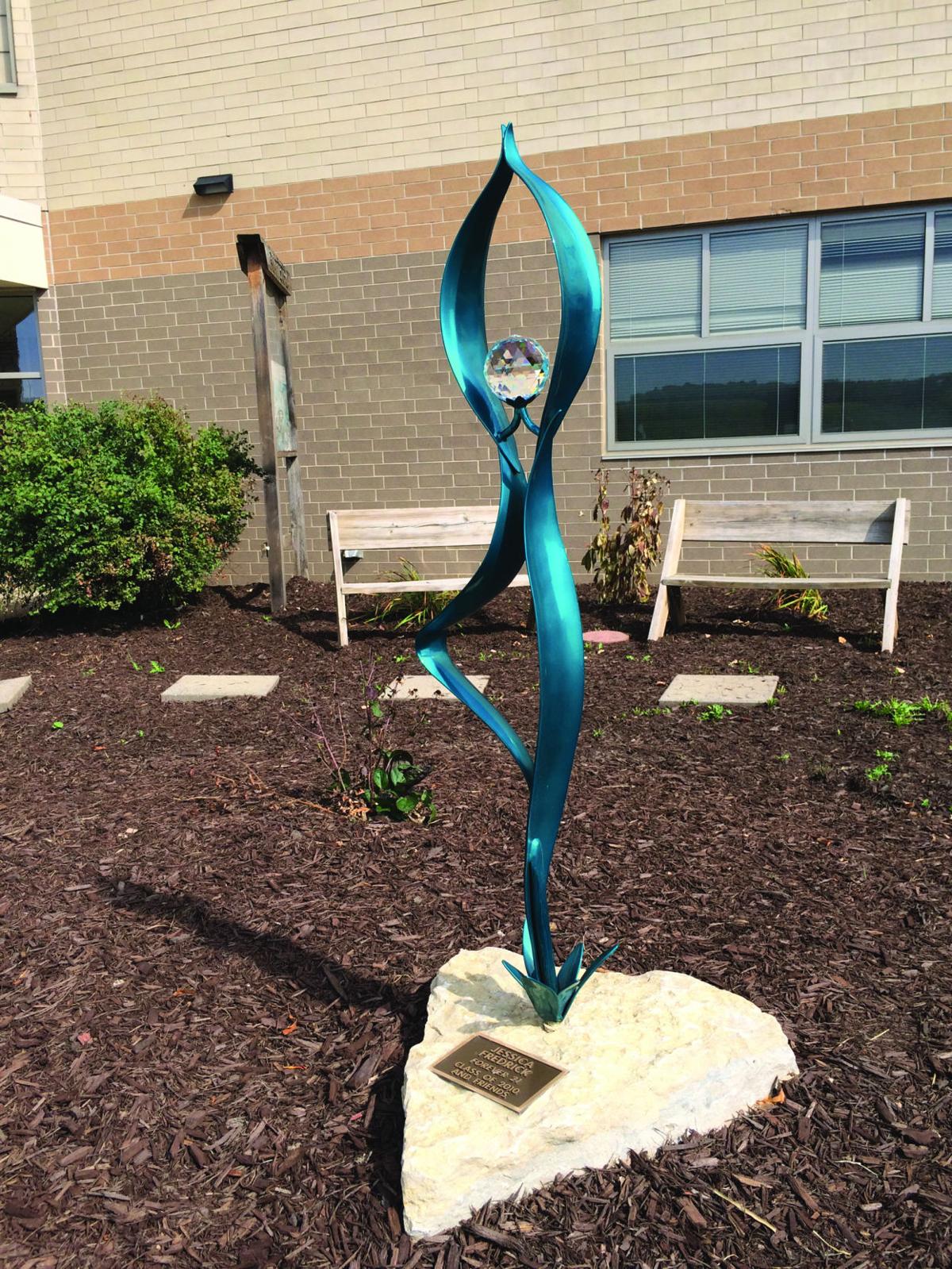 This sculpture, on display at Lodi High School, honors a young Lodi woman who passed away last spring.

This sculpture, on display at Lodi High School, honors a young Lodi woman who passed away last spring.

Rick Findora, the owner of Morning Glory Glass Studio in Lodi, has been creating works of art with glass, wood, wrought iron and bronze for many years.

His work can be found in residential and commercial buildings, as well as in schools. But perhaps most meaningful for him is being able to blend his passion for creativity along with his deep sense of religion.

His first large commission was in the chapel of the Lodi Good Samaritan Center, where he completed the woodwork, stonework for the cross and stained glass for the windows.

Since that time, he has created custom artwork in and out of Wisconsin.

Nearby he continues working on the stained glass windows for the new St. John the Baptist Catholic Church in Waunakee, and he also completed metal and glass work projects for St. Albert’s in Sun Prairie. Further away, and several years ago, he created a 16-foot steel Monumental Cross for a church in St. Louis. He has also created liturgical furnishings such as Tabernacles and hanging and floor standing bronze candles, as well as glass holy vessels.

Although he has a strong Christian faith, and feels at his best when he can combine his craft with his spiritual beliefs, he loves all his artwork no matter the venue.

“When the phone rings, that’s where you go,” he says.

Another place one canfind his stained glass artwork is in the entrance windows of some local schools. Elementary students in Lodi and Middleton have drawn pictures on paper that Findora later arranged into one composition, keeping true to the size and color of the young

At the high school level, the students have made the stained glass themselves.

“You just marvel at their creativity,” Findora says.

No matter the piece, each has meaning. Sometimes his artwork has been used to touch the lives of others during difficult times.

Recently, he created a beautiful ballerina sculpture made out of hand forged steel and coated in teal to honor the memory of a young Lodi woman who passed away last spring. This inspiring piece now resides on the grounds of Lodi High School, where she had graduated a few years ago. Findora was also asked to create a smaller piece for her gravestone.

Looking back on his life, he can easily see how the path he followed has led him to his career and business in Lodi.

“You can do something today that can be so meaningful later,” he says.

As a child growing up in East Point, Mich., Findora first learned woodworking by watching his father build things on his own work bench. During high school, he was especially fond of his shop class.

After graduating from high school, he studied aeromechanics at a junior art college near Detroit where he learned how to form metals. His fascination of airplanes and flying led him to later enlist with the U.S. Air Force from 1974-78.

Although his home base was in Little Rock, Ark., he was able to travel throughout Europe.

Traveling is something his job still allows him to do today, considering his pieces can be found in almost every state and he handles all the installation himself.

“There may be a state or two that I don’t have work in,” he says with a smile.

Toward the end of his service, while stationed in Little Rock, he took some classes at an art center focusing on woodworking and stained glass. An early project required the students to make their own glass.

“That’s what got me hooked,” he says.

After military service he found an apprenticeship working on antique cars in Iowa restoring old Bentleys and Royces. He was able to learn a lot about metal forming.

“I just had this itching to do glass blowing,” he says.

So he eventually moved to the area to study at the University of Wisconsin-Madison, where the American glass art movement started. After beginning some coursework there, he later studied a few semesters at a school near Detroit learning glass blowing before ultimately transferring back and graduating from U.W.-Madison with a BFA in 1986.

Shortly thereafter, he opened Morning Glory Glass Studio in Lodi, and has enjoyed it ever since. He loves designing the pieces and the creativity that comes with his craft, but what he really appreciates is working with his hands.

“If my fingers aren’t going, I’m going nuts,” he said.

He and his wife, Carrie, a Lodi native, have two children: Andrew, who watched his father in the studio growing up and is now studying mechanical engineering at U.W.-Madison, and Heather, who is a nurse.

Findora is grateful for his talent, feeling that it was bestowed upon him by a higher power. Using it to further his faith or help others makes it all the more special.

To learn more about his studio, visit morninggloryglassstudio.com.