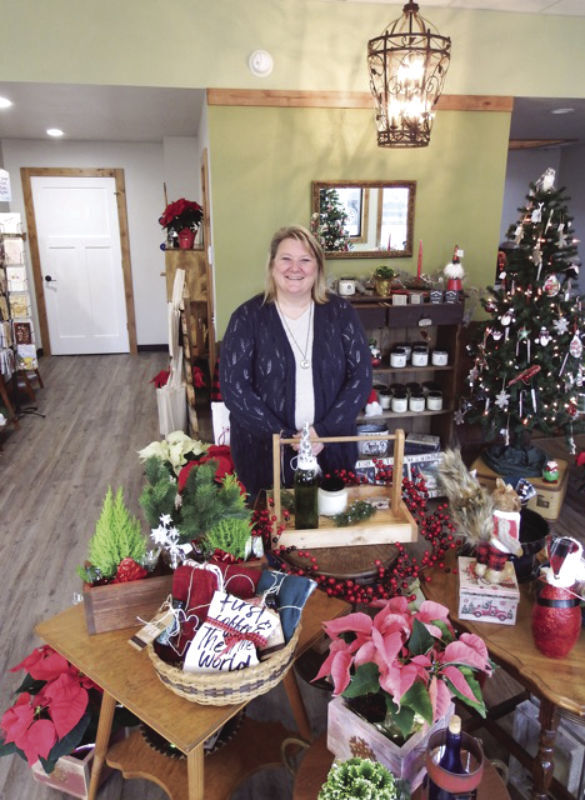 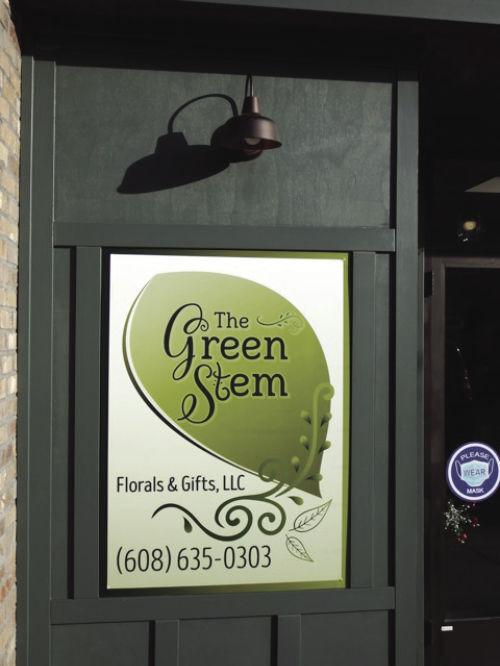 The Green Stem logo is seen outside the entrance to the store. The floral and gift shop recently opened in downtown Poynette at 126 N. Main Street. 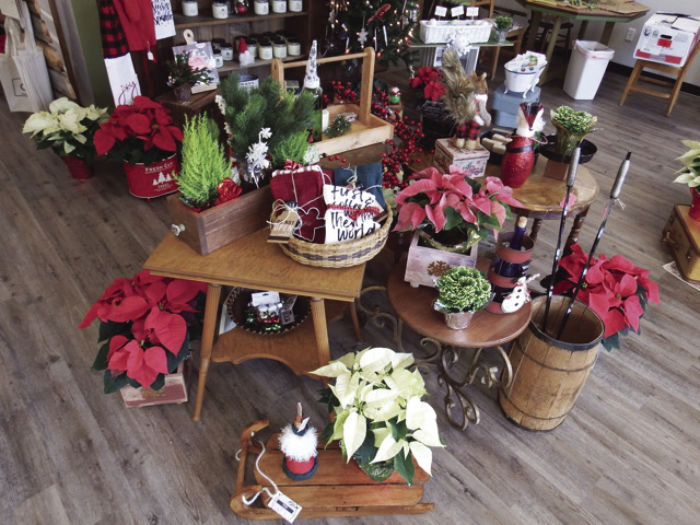 Some of the plants and unique gifts are displayed at The Green Stem Floral and Gifts, located in downtown Poynette at 126 N. Main Street. Owner Shawntel Sandstrom is selling various art pieces and gifts made by local artisans at her shop. 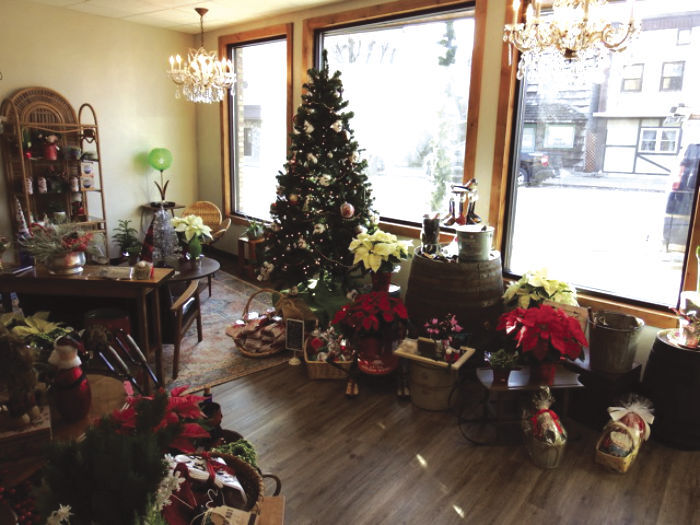 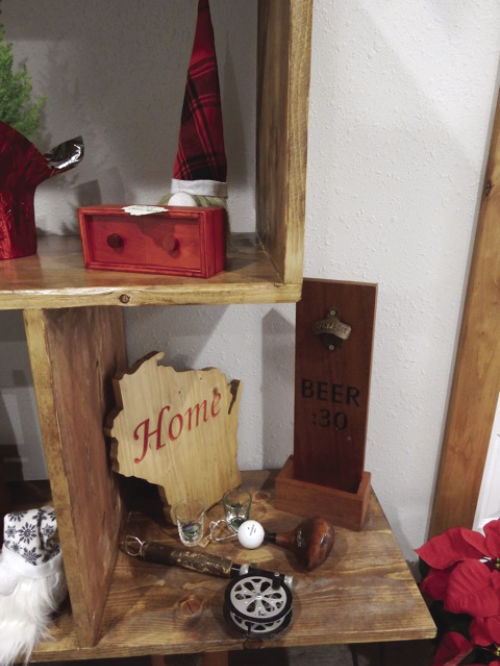 Some of the unique gifts are displayed at The Green Stem Floral and Gifts, located in downtown Poynette at 126 N. Main Street. Owner Shawntel Sandstrom is selling various art pieces and gifts made by local artisans at her shop.

The Green Stem logo is seen outside the entrance to the store. The floral and gift shop recently opened in downtown Poynette at 126 N. Main Street.

Some of the plants and unique gifts are displayed at The Green Stem Floral and Gifts, located in downtown Poynette at 126 N. Main Street. Owner Shawntel Sandstrom is selling various art pieces and gifts made by local artisans at her shop.

Some of the unique gifts are displayed at The Green Stem Floral and Gifts, located in downtown Poynette at 126 N. Main Street. Owner Shawntel Sandstrom is selling various art pieces and gifts made by local artisans at her shop.

Shawntel Sandstrom always wanted to own a floral shop. It had been a dream of hers since she was a teenager.

However, that dream did not become a reality until recently. When the calendar turned to December, she opened the doors of The Green Stem Floral and Gifts in downtown Poynette. The shop is located at 126 N. Main Street, two doors north of the Poynette Area Community Library.

“It has been a dream of mine since I was in high school to own my own floral shop,” Sandstrom said, adding that she even had a name picked out at the time. Over the years, that name has gone through changes.

Sandstrom had a chance to fulfill her dream more than 30 years ago. But, she had to make a decision of taking a job at a floral shop or one at an SSM Health eye clinic in downtown Madison. She took the job at the eye clinic and had “no regrets” about doing so. It put her dream on hold for a while.

After SSM Health, and the clinic was to undergo some restructuring, Sandstrom decided to leave and took her severance pay. She had no “master plan” after leaving the clinic, but kept the faith that she would land on her feet.

Then sad news came to current floral shops in the village. Julie Hessling had to close The Watering Can after her husband passed away earlier this year. Hessling operated her shop for six years. Then in October, Chris Steinhorst — owner of Mackenzie Corner — lost her battle with an illness, leaving that shop vacant as well. Those two losses also left the village of Poynette without its own floral shop.

“The idea to open a floral and gift shop hadn’t come back around to me until I had heard the news that we would be losing our second floral shop due to a sad loss,” Sandstrom said, referencing the passing of Steinhorst. “Chris was a ray of sunshine to all that she encountered.”

Sandstrom lamented on what Steinhorst and Hessling — and their businesses – meant to the community. The two shops were there for community members during all the events of their lives — the births of babies, birthdays, weddings, anniversaries and the death of loved ones.

So that’s when Sandstrom began her plan to fulfill her lifelong dream, as well as keep a floral shop running for the Poynette community.

“Our surrounding community needed someone to step in and take on that role,” Sandstrom said. “I dabbled in flowers and I thought, ‘I need to do this.’ This was the job for me.”

Even as the COVID-19 pandemic continued, Sandstrom remained confident in fulfilling her dream. When asked if she had reservations about opening during the pandemic, she replied, “Yes, and no.” She said that there was fear that non-essential businesses could be shut down again.

“However, we have the need to express ourselves through gifts and flowers no matter what this pandemic brings,” Sandstrom said. She noted that the surrounding community has several churches, three wedding venues, schools, funeral homes and lots of individuals — all of which “create a demand” for a floral shop.

Before the plan went in motion, Sandstrom wanted to make sure her family was OK with the idea of her new shop.

“There were many discussions with my family. It was important that my husband and our two kids be on board with the idea,” Sandstrom said.

While owning her own shop is a first for her, Sandstrom has been involved with small businesses before. She, along with Dawn Porter, own an event planning and rental business called Making Memories. Sandstrom (nee Kruser), who grew up in Dickeyville, also comes from a family of small business owners.

Sandstrom’s family has also helped in the process of opening The Green Stem. Her son helped design the sign outside, her daughter helped design a corner “zen” spot inside the shop and her husband, Dave, helped build many of the shelves. There are pieces of furniture and a few other decorations within the shop that have a story, too, which she enjoys telling anybody who may come into the store.

From the time she decided on a location to actually opening her doors, it was just a matter of months for everything to fall into place.

“One of the biggest steps was the location,” Sandstrom said. “Where I now hang my shingles was a space that went through some major transformation in less than a month thanks to the hard-working building manager, Becky Schutz, and her father, David Branish, along with their crew of craftsmen. My family helped a little too.”

The flooring of the shop was installed on the Saturday after Thanksgiving, and three days later — Dec. 1 — Sandstrom was open for business.

Sandstrom will also use various pieces from local artists to stock her shelves, allowing her “to keep a nice inventory and fun seasonal items” for the customers. Some of those items include candles and other unique gifts. Sandstrom said she’ll always be adding to and changing her inventory throughout the year and different seasons.

“I would expect The Green Stem will have some busy and slower times over the first year and need time to establish,” Sandstrom said. “I’m willing to go along for the adventure and will enjoy seeing what the future brings.”