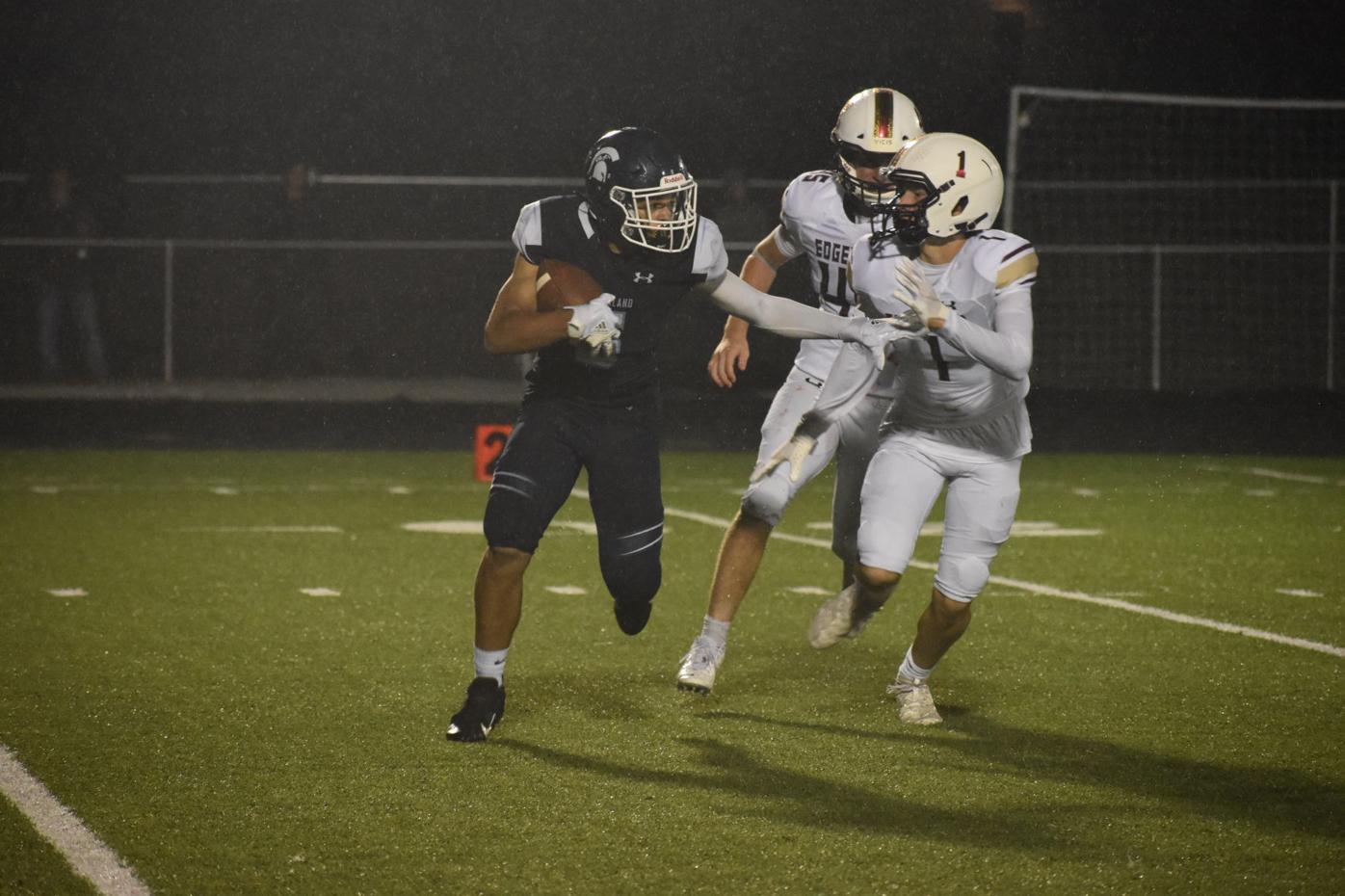 Junior wide receiver Brandon Dyer-Ysaguirre returns a punt against Edgewood. McFarland returned to the playoffs in 2021. 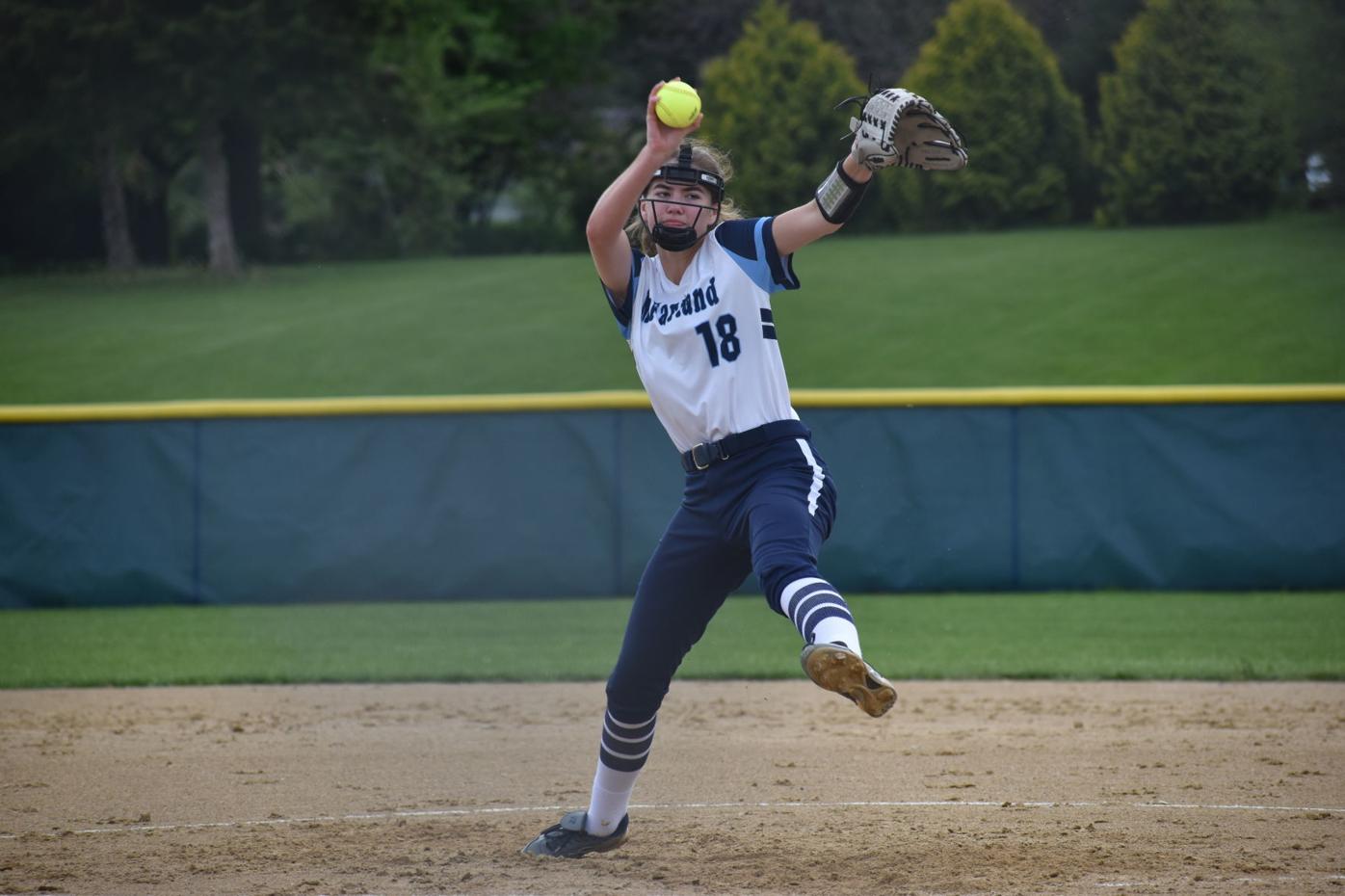 Brynn Bieri was selected to the Rock Valley All-Conference second team for the 2021 softballs season. 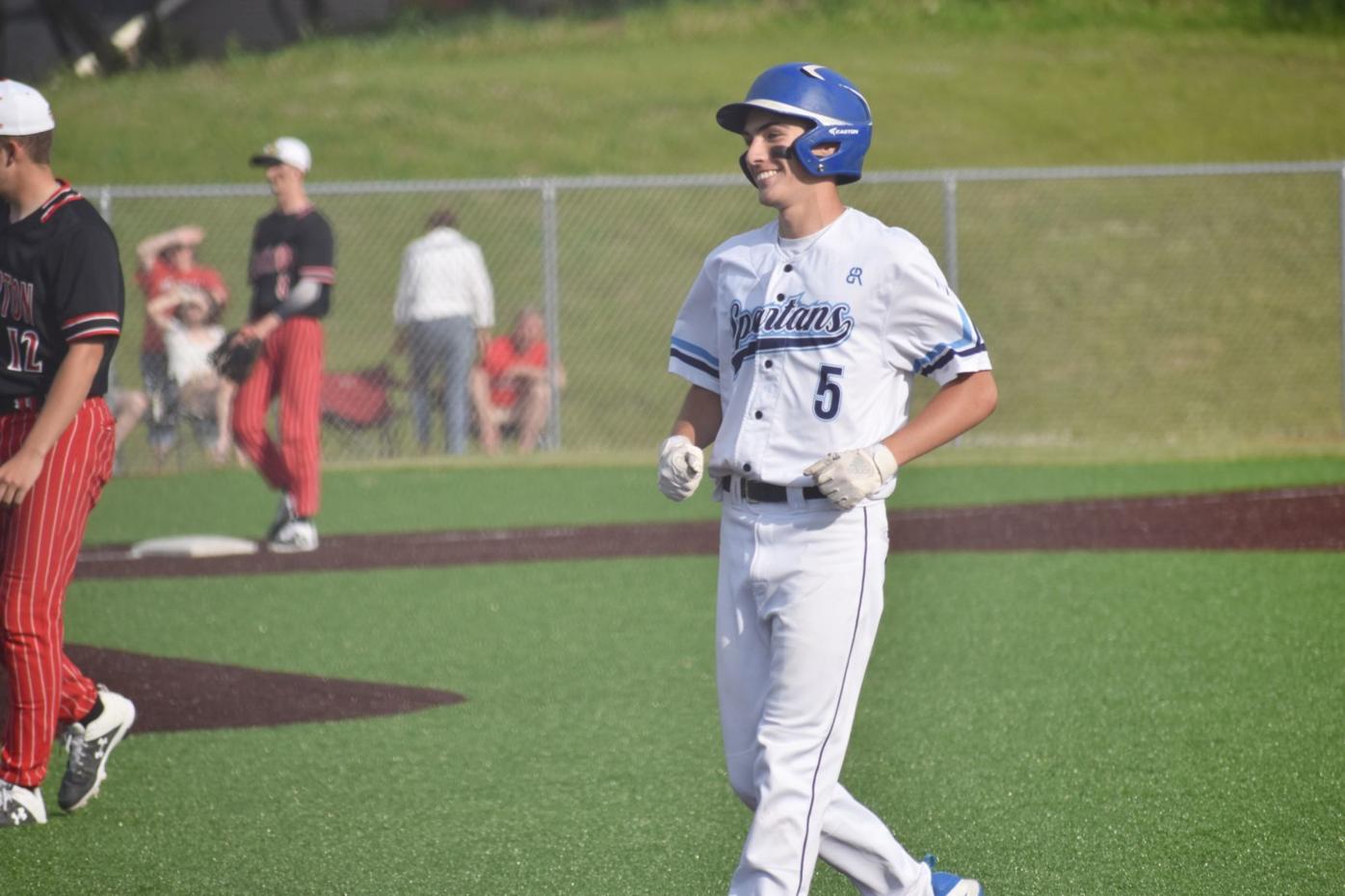 Gavin Wood is all smiles as the McFarland baseball team got to resume play in the 2021 season. 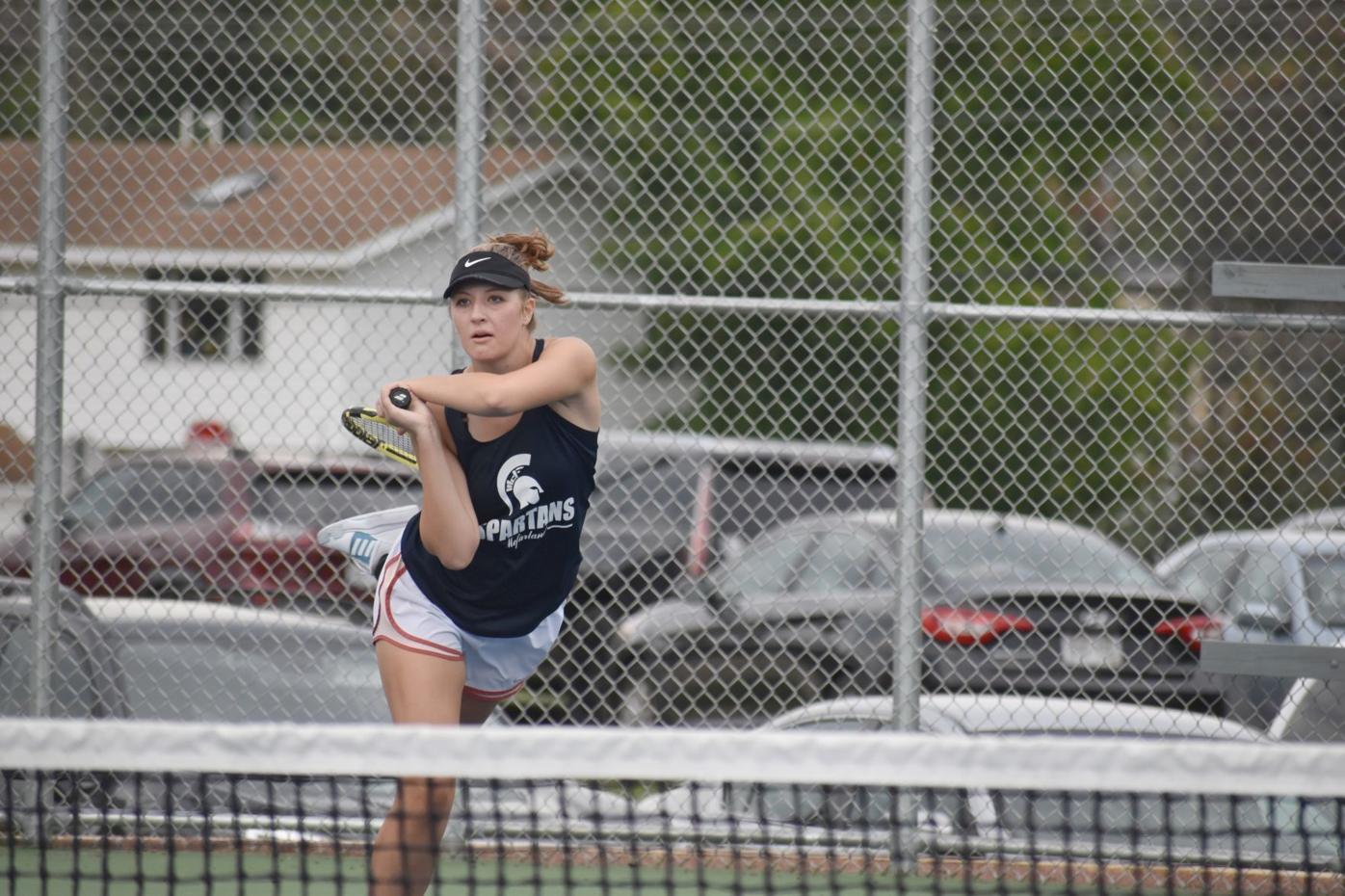 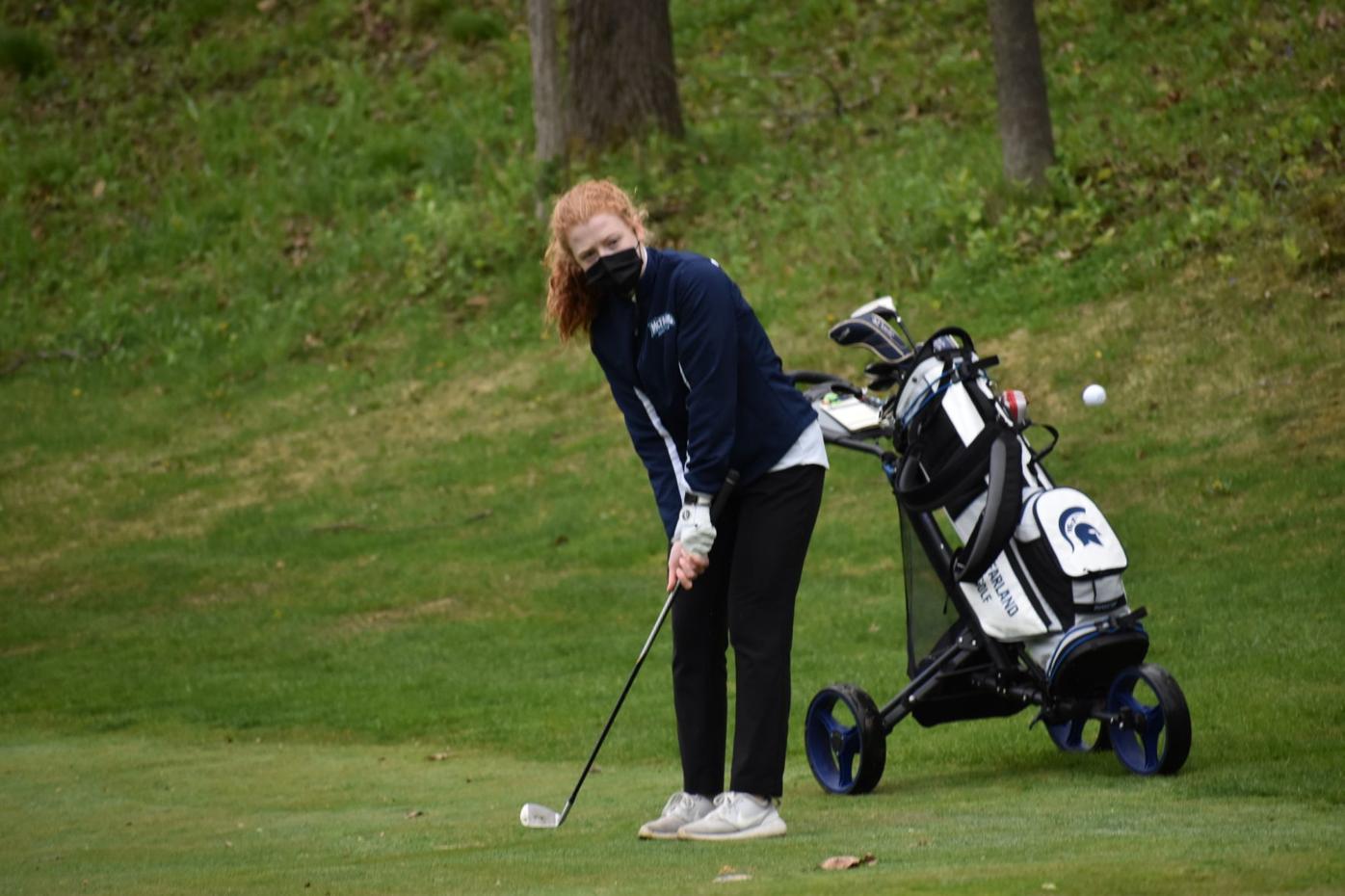 Megan Gates qualified for sectionals twice in 2021, the first time in the alternate-fall season in May and the second time happening in September. 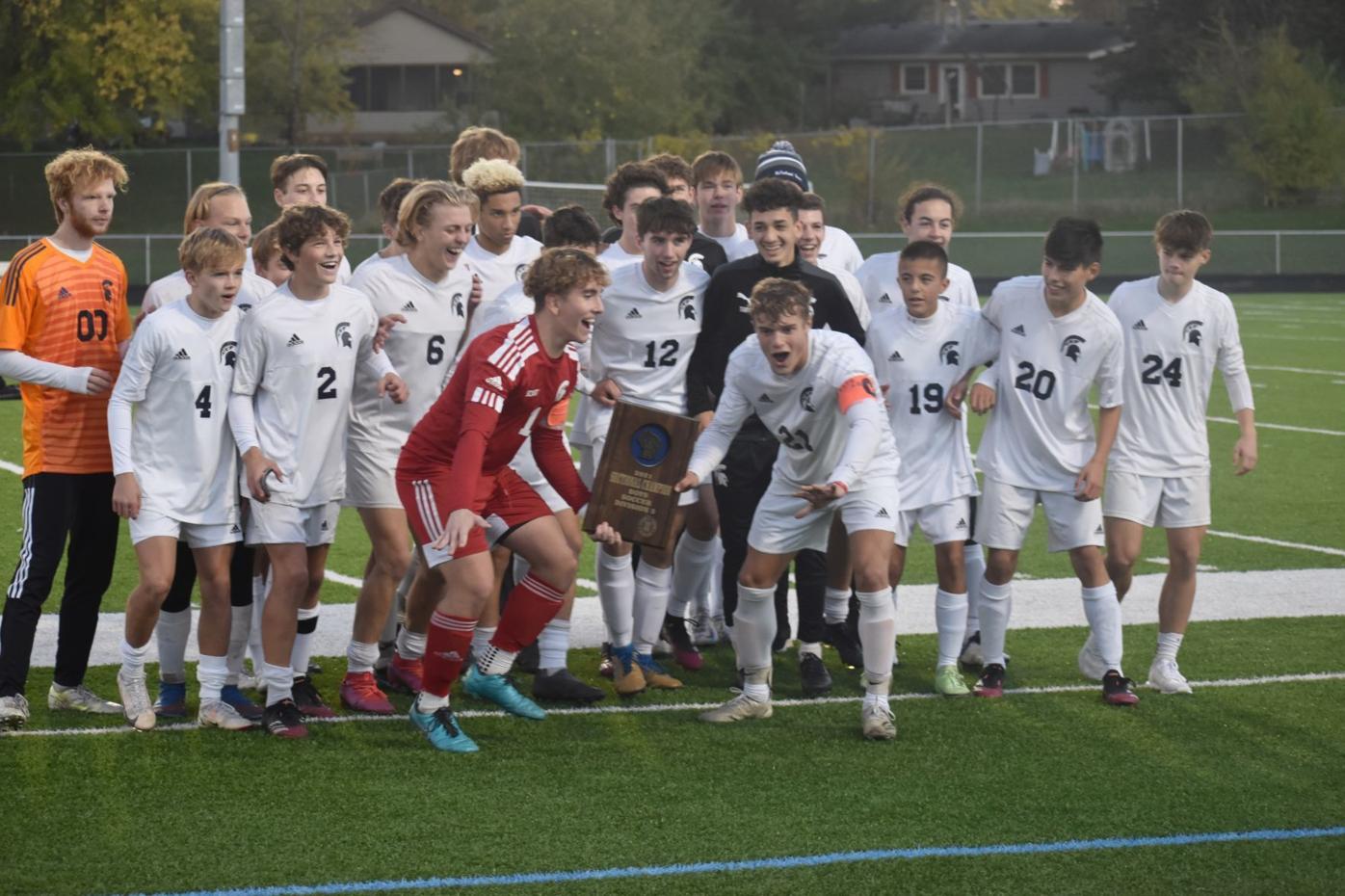 The McFarland boys soccer team won the Division 2 State Championship during the alternate-fall season and secured another trip to state in the fall. 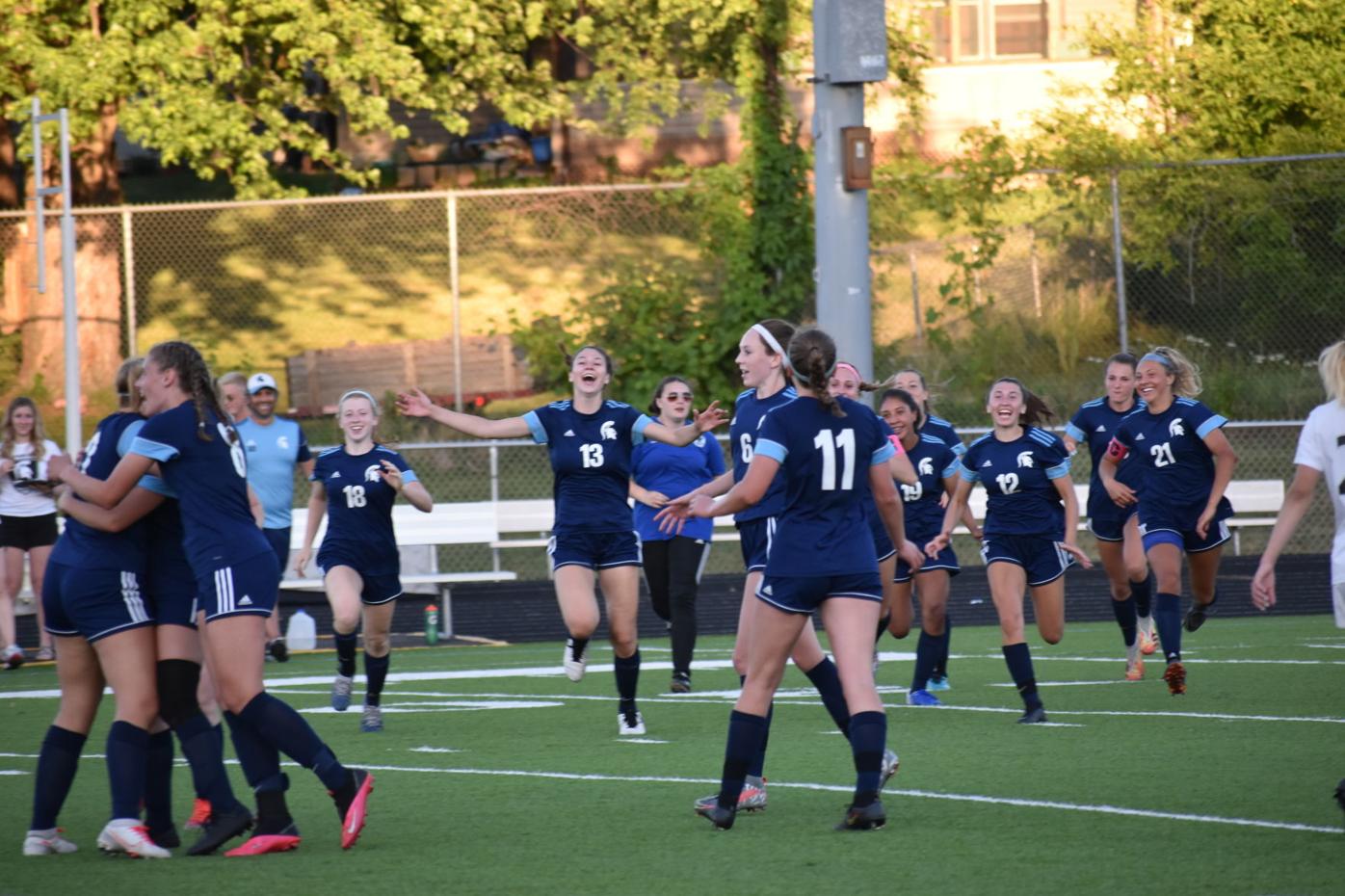 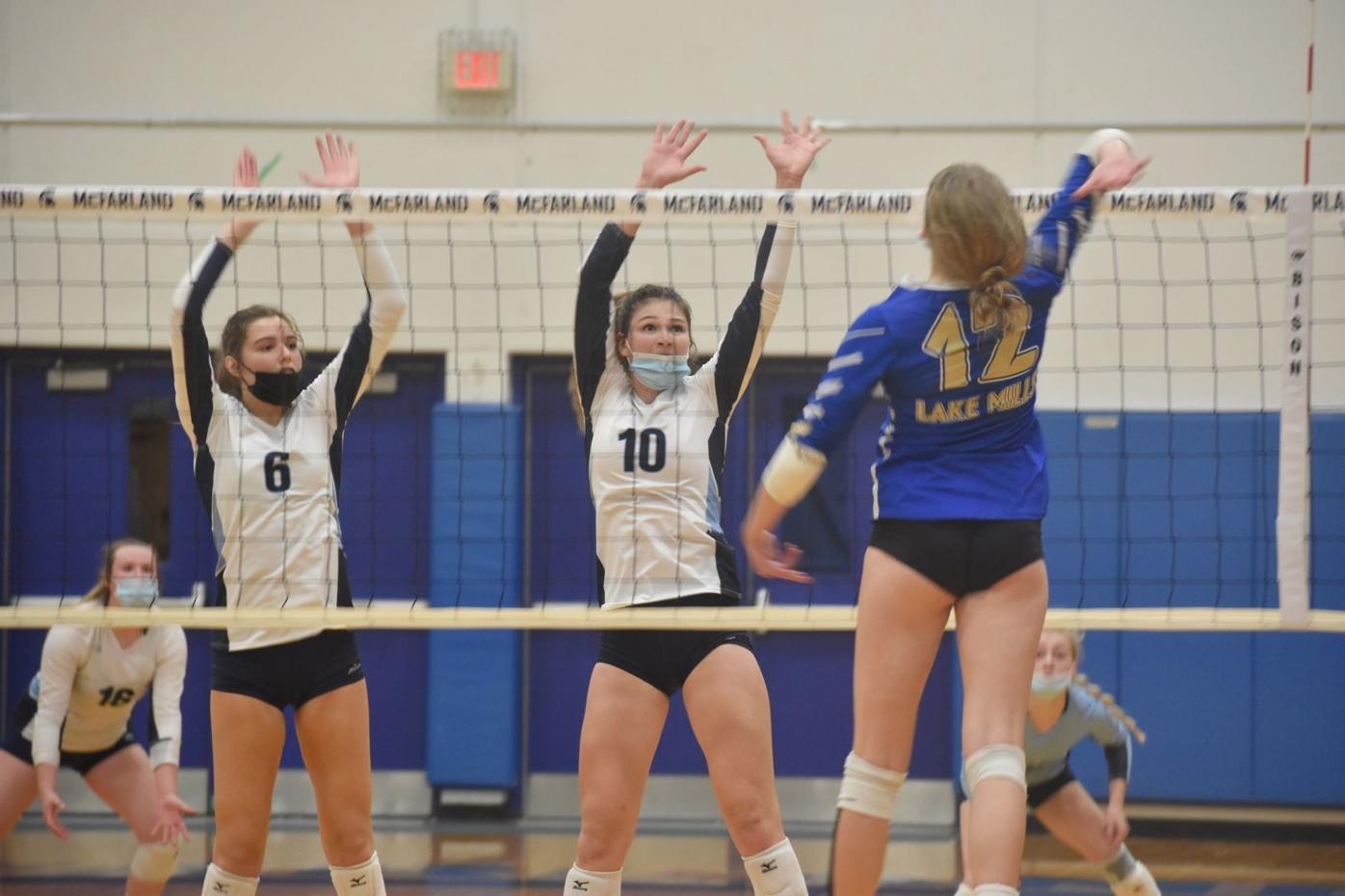 The year 2020 left a lot to be desired, but the community of McFarland took advantage of the new year with state championship runs, jaw-dropping performances and attention-grabbing headlines. Here’s a look back at the biggest headlines from each month for McFarland athletics in 2021.

Sports officially returned with McFarland High School taking part in a shortened winter season after the 2020 spring season was cancelled and the 2020 fall season was postponed due to the COVID-19 pandemic. The Spartans’ boys swim team showed they didn’t miss a beat, winning all 11 events in their first dual meet at Milton. The team also swam at Janesville, Sauk Prairie, and competed at sectionals in Fort Atkinson.

The McFarland/Monona Grove co-op wrestling team battled their way through the season with seniors Zach Gunderson at 152 pounds, Guenther Switzer at 220 pounds and Kristian Schlicht at 285 pounds all advancing to the sectional round Saturday in Mukwonago after finishing in the top two of the Jan. 30 regionals at Beaver Dam.

The boys basketball team won three-straight games, including two postseason wins in the regional round, with Pete Pavelec scoring over 20 points in all three wins. Three Spartans made the Rock Valley All-Conference team. Werwinski was named to the first team, while Pavelec and senior Blake Kes were honorable mention.

The girls basketball team won four-straight games, winning regionals and advanced to the sectional final before losing to Reedsburg. Mallegni, along with senior Katie Hildebrandt, was named to the Rock Valley All-Conference first team and were honorable mentions to the Wisconsin Basketball Coaches Association All-State team. Seniors Morgan Butler and Lindsey Lonigro were named honorable mentions to the RVC All-Conference team.

Like many other schools, the Spartans competed in the alternate-fall season, a condensed fall season moved to the early spring.

The girls swim team swam to a dual victory against Monona Grove with Emily Schoenbrodt winning two individual races and a relay event. The swim team cruised through the month of March, capping off the month by winning the Division 1 sectional at Jefferson.

After competing in the Wisconsin Interscholastic Athletic Association’s (WIAA) Division 2 state title game in 2019, the McFarland volleyball team showed no rust as they reached a record of 7-0 in the month of March.

The girls tennis team proved to be a tough match as the Spartans swept singles competition in their first two matches of the season.

While it was different than a fall Friday night, the Spartans football team kicked off the shortened spring season with a 22-6 loss to Monroe on Friday, Mar. 26.

Also coming off a state appearance in 2019, the boys soccer team started the month of April undefeated, only allowing five goals in their first nine games.

Competing at state swim on Tuesday, April 6, the 200-yard medley relay tandem of Adrianna Nickels, Laura Billmann, Sophia Alf and Schoenbrodt finished eighth with a time of one minute and 50.16 seconds. The 200-yard medley team of Freeman, junior Laura Billmann, Schoenbrodt and Nickels placed second in 1:49.69. Other state qualifiers included Schoenbrodt, who finished second in the 50 freestyle (:24.75), and Nickels, who placed fourth in the 100 backstroke (1:00.29). The Spartans scored 45 points to place 16th as a team.

The volleyball team advanced to state after sweeping Monona Grove to win regionals and defeating both Mount Horeb and Edgerton in sectionals. The Spartans were beaten at state by eventual state champion Appleton North.

Laura Maudlin, Abigail Komro and the doubles team of Sadie Bartzen and Lexi Kohn qualified for sectionals after winning their flights. Maudlin advanced to state after receiving a special qualifier after the conclusion of sectionals.

The football team earned their lone victory of the season against Whitewater, sending the senior class off with a 34-6 victory on senior night on Friday, April 23.

The girls golf team saved their best performance for the end of the season, finishing second at the Rock Valley Conference Championship on Tuesday, April 27.

After an undefeated regular season, the boys soccer team advanced to state after beating Stoughton, Sugar River and DeForest in the playoffs. Jake Sampson, Matt Schutt and Zach Nichols were named to the Wisconsin Soccer Coaches All-State team for their part in the undefeated season.

Megan Gates and Emily Schoeller advanced to the WIAA Girls Golf Spring Sectional at Middleton after the Spartans finished sixth at regionals. Gates finished tied for 27th and Schoeller finished in 45th at sectionals.

Spring sports competitions returned in May after being cancelled in 2020, with a schedule that ran later into the summer.

The girls soccer team went on an undefeated tear throughout the season, including a 2-1 victory over Oregon with Elise Gillen providing the go-ahead goal.

May 20th to May 24th was a good week for the boys tennis team as they picked up wins over Edgerton and Jefferson. The boys and girls track and field teams each took first place in the McFarland Quad on May 25.

Sophomore pitcher Brynn Bieri earned second team Rock Valley All-Conference for the softball team, while Hannah Hall and Bailee Judd were selected as honorable mention after the Spartans finished with a record of 7-14.

The McFarland girls soccer program won their first state championship in a double header. The Spartans defeated New Berlin Eisenhower 2-0 in the first matchup and claimed the championship game 4-1 against Plymouth. Sydney Feldner scored three goals, while Greta Blau, Sierra Binger and Jaelyn White all added a goal in the double header.

Along with the state championship, McFarland girls soccer would bring home plenty of awards with White being named Rock Valley Conference Player of the Year, a first team All-State selection and chosen to the 2021 United Soccer Coaches Spring Girls High School All-North Region. Goalkeeper Katie Hildebrandt, Feldner and Blau were named honorable mention on the state team and earned first team honors for the RVC.

Earning conference honors were Avery Pennekamp, Grace Breuchel and Elise Gillen on the first team, Elise Freeman on the second team and Emily Blattner and Haley Updike were honorable mentions.

With the regular season winding down, the Spartans’ baseball team took down Edgerton 10-5 on senior day. The Spartans would have four players represented on the RVC All-Conference team with Connor Punzel and Matthew Amrhein on the second team, while Gavin Wood and Jake Wedvick made honorable mention as the Spartans went 9-13 on the year.

The McFarland golf team improved each time out on the green, taking fifth at regionals with Ryan Ertel and Kai Klass qualifying for sectionals. Klaas finished 42nd and Ertel took 48th at sectionals.

At track and field sectionals, Ryan Olson, Matthew Miller and Bryce Taylor all earned personal records in their events. Freshman Andrew Kelley and senior Samantha Pili secured trips to state for track with third-place finishes in the boys 100-meter dash and in the girls pole vault.

The summer months also brought the return of home talent baseball. The McFarland Muskies finished tied for fifth in the Southeastern standings with a record of 4-6. After starting the year 1-5, the Muskies won three of their last four games, including a win over Albion on fan appreciation day.

The warm summer Friday nights that gave way to cool to autumn nights meant that high school football was officially back to normal. The Spartans opened the season with a 40-0 loss to Lodi on Friday, Aug. 20.

The girls golf and tennis teams started the season off battling injuries and shuffling lineups, but both teams picked up play once they were back to strength.

After starting the year 0-2, the month of September fared better for the McFarland football team. The Spartans went undefeated in the month with a forfeit win over Edgewood, a 27-10 victory over East Troy, a 20-14 win over Whitewater and a 20-19 overtime win against Evansville.

The volleyball team, who went undefeated throughout the month on the way to a record of 40-3, the most wins in program history.

Going undefeated through September was a trend that the girls swim team picked up on as strong performances by Mara Freeman, Emily Schoenbrodt, Adriana Nickels and Laura Billmann helped McFarland defeat Sauk Prairie, Lodi and Portage.

Overcoming injuries through the season, the boys soccer team got healthy at the right time, winning the RVC tournament and clinching another trip to state with a 3-0 victory over Evansville.

The volleyball team also clinched a ticket to state with a 3-0 sweep over Sauk Prairie. The Spartan season looked to be in trouble against Lake Mills on Thursday, Oct. 28, but McFarland battled back in the fifth set to advance.

A 28-7 victory over Edgerton on senior night helped the football clinch a playoff berth on Friday, Oct. 15. McFarland would go on to give the number one seeded Greendale Panthers everything they could handle before losing 17-7.

The fabulous seasons of the volleyball and soccer programs came to end at their state tournaments.

Volleyball advanced past Pewaukee 3-1 in the semifinal, but lost 3-1 to Luxemburg-Casco in the championship game. Earning first team Rock Valley All-Conference included Avery Pennekamp and Maddy Fortune, who made the All-State first team, and Gwen Crull and Hannah Rounds, who made the All-State second team. Holly Casucci and Ainsley Pennekamp were RVC honorable mentions.

For soccer, the Spartans were shutout 2-0 by Notre Dame in the state semifinal. Zach Nichols, Matt Schutt and Bubba Blair were selected to the All-State team, while making the RVC All-Conference first team. Mason Brown, Kyle Connor, Rowan Wagner made the first team as well, while Keegan Bell and Karan Tara were honorable mentions.

The boys swim team picked up where the girls left off, starting the year by winning the Badger-West Conference relays.

Aside from still masking up in an indoor setting, the winter sports season largely returned back to normal.

Teagan Mallagni dropped a career-high 44 points in a 77-64 win over Evansville.