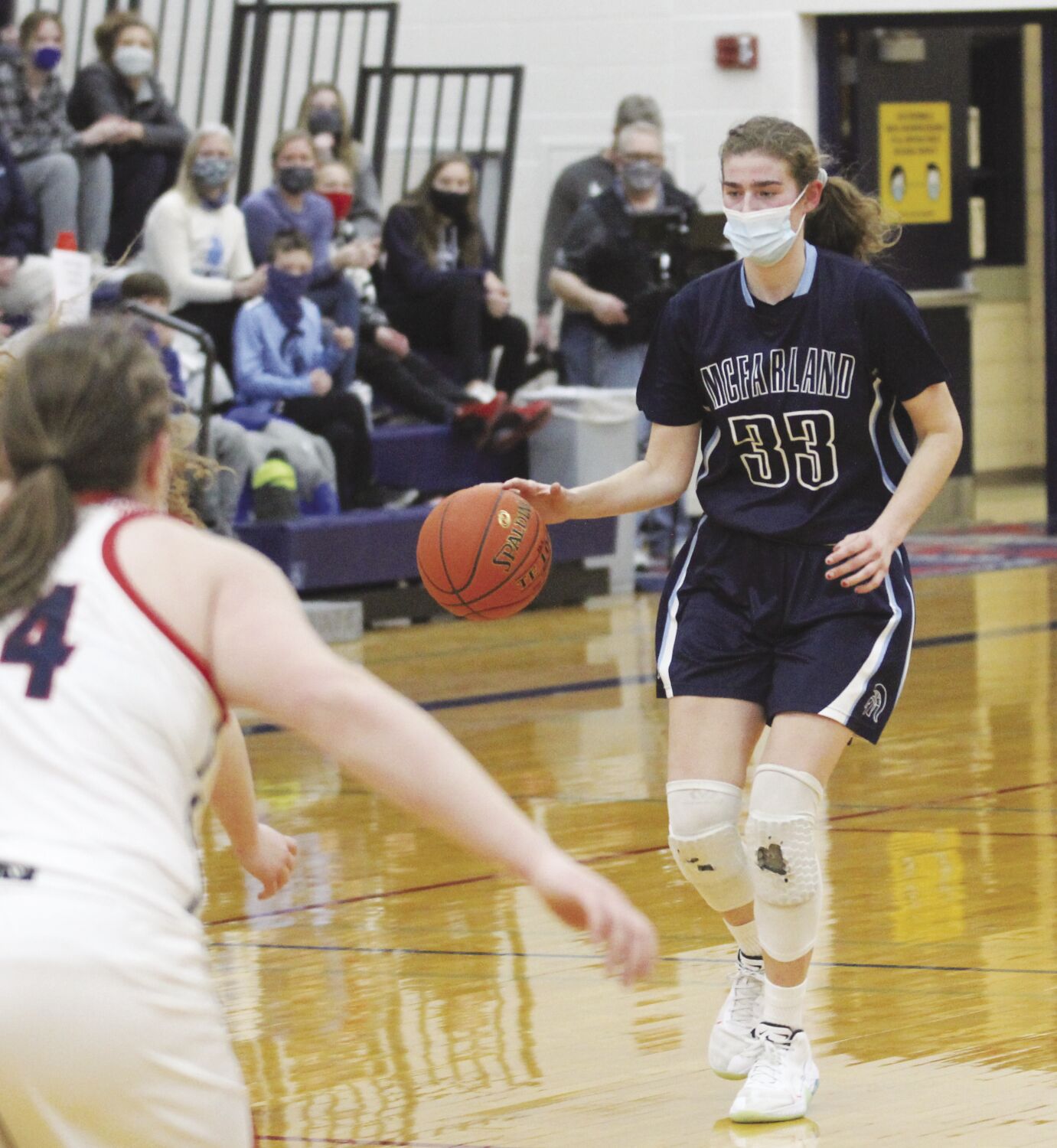 Senior Katie Hildebrandt scored her 1,000th career point for the McFarland High School girls basketball team in its WIAA Division 2 Sectional final game at Reedsburg on Saturday Feb. 20. However, the Spartans' hopes for a trip to State were dashed by the Beavers, who won easily 78-46. Hildebrandt had 15 points. 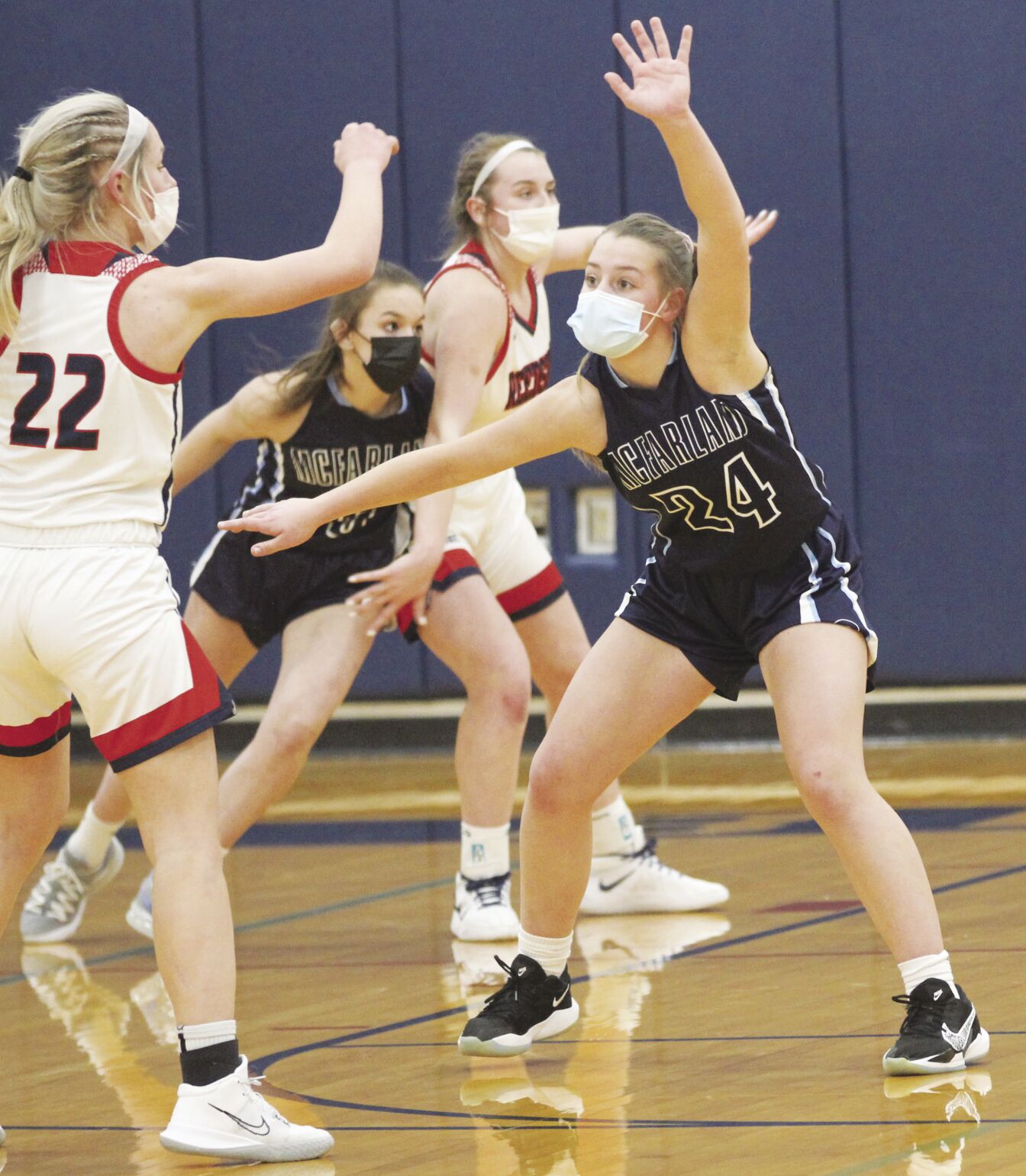 Freshman Ava Dean plays defense against a Reedsburg player in the McFarland High School girls' basketball team's WIAA Division 2 Sectional final game Saturday Feb. 20. Dean scored McFarland's first points with a 3-point shot, but the Spartans were overwhelmed by the Beavers, 78-46. McFarland ended its season with a record of 9-5.

Senior Katie Hildebrandt scored her 1,000th career point for the McFarland High School girls basketball team in its WIAA Division 2 Sectional final game at Reedsburg on Saturday Feb. 20. However, the Spartans' hopes for a trip to State were dashed by the Beavers, who won easily 78-46. Hildebrandt had 15 points.

Freshman Ava Dean plays defense against a Reedsburg player in the McFarland High School girls' basketball team's WIAA Division 2 Sectional final game Saturday Feb. 20. Dean scored McFarland's first points with a 3-point shot, but the Spartans were overwhelmed by the Beavers, 78-46. McFarland ended its season with a record of 9-5.

The tears were not cascading down the faces of most players on the McFarland High School girls’ basketball team after it lost the WIAA Division 2 Sectional final game Saturday Feb. 20 at Reedsburg, 78-46.

It was a night that simply didn’t belong to the Spartans.

McFarland seemed to have every shot fall through the hoop in Regional victories against Sauk Prairie and Madison Edgewood, and Thursday’s Sectional semi-final win over Jefferson.

But against the Beavers, many Spartan shots bounced off the back-iron and lip of the rim, and not as frequently through the hoop. McFarland scored just 15 total field goals, including three from the 3-point line.

Meanwhile, the Beavers made threes on 11 of their 21 field goals and made 26 of 34 free throws as the Spartans committed 25 total fouls.

Every good team is entitled to have games where they struggle, but for McFarland, it came in a playoff game with a trip to the State tournament in La Crosse on the line.

“It was not our night,” said McFarland Head Coach Sara Mallegni. “I don’t even know what to say.”

The game was close for the first eight minutes with freshman Teagan Mallegni’s layup giving McFarland a 12-9 lead. But the Spartans would score only more five points until halftime while the Beavers put up 28 points to lead 37-17 at halftime. Many of Reedsburg’s points came on turnovers as McFarland had difficulty generating an offense with the Beavers pestering them on defense.

Senior Lindsey Lonigro said her teammates felt they still had a chance to beat Reedsburg despite the large deficit.

“We knew we were going to have to come out in the second half and be a lot more aggressive and try to make every possession count,” she said. “We worked very hard to get where we are.”

The Beavers hit a three on their first possession of the second half, but Teagan Mallegni scored the next four points to cut the Reedsburg lead to 19 with 16:30 still to play. But then came another one of those nightmarish droughts with McFarland on the short end of an 18-5 run that put Reedsburg on top 58-26 with 8:40 remaining. McFarland kept diving for loose balls and muscling its way to the hoop even though the outcome was inevitable.

Two Katie Hildebrandt free throws lowered the lead to 60-37 with 5:30 remaining, but Reedsburg had the game safe in hand and made most of its remaining points from the free-throw line.

“They are definitely a solid team. They were hitting a lot of shots and we were just getting outrebounded,” Coach Mallegni said. “It’s hard to come back from that.”

“I thought we played good defense, but they were making everything,” Hildebrandt said.

Reedsburg’s Mahra Weiman led all scorers with 30 points including five shots from the arc. Sydney Cherney hit 12 of 14 free throws on route to a 19-point evening. Melissa Dietz also reached double figures with 10.

Teagan Mallegni led McFarland with 16 points and senior Hildebrandt scored 15 in her final varsity game. Senior Morgan Butler started for the Spartans but didn’t score while senior Lindsey Lonigro scored four. McFarland had a decent 13 of 20 from the foul line.

Even when McFarland was losing by 20, Coach Mallegni said she tried to build up the team’s sagging spirits.

But the Spartans went down in defeat and ended their season with a 9-5 record.

Hildebrandt, Lonigro and Butler will depart the Spartans because of graduation. Coach Mallegni said the trio will be difficult to replace.

“This is really a great group of seniors. We knew as they were growing each year that this would be a tough team,” she said. “They made a huge improvement from last year to last year when it came to intensity and leadership, learning the game and working hard. We are very proud of them.”

For Hildebrandt, who will go on to play NCAA Division I women’s basketball at North Dakota State University, playing for her coaches and with her teammates at McFarland was a rewarding experience. She said the future is very bright for the girls’ basketball program.

“Everybody coming back are really good teammates,” she said. “Even with COVID, coach Mallegni came across as positive and had a good attitude for the rest of the team to follow.”

As for freshman Teagan Mallegni, Hildebrandt foresees a bright future.

“She is amazing. Over the next three years, she will get better and better,” Hildebrandt said.

Lonigro also experienced many positives as a member of the Spartans.

“I’d like to thank my coaches and teammates for making this an unforgettable experience,” she said. “It was not the way we wanted to end it, but it was an amazing run for our team and our girls.”

A number of underclass players will return in 2021-22 with the experience of being on the varsity roster, including Teagan Mallegni, juniors Maddy Fortune, Megan Gates and Chloe Goecks, sophomore Adrienne Kirch and freshmen Brynn Kirch, Ava Dean, Elise Freeman and Hailey Testolin.

Aside from departing high school for the high profile world of women’s college basketball, Hildebrandt will also graduate with 1,000 points in her career. She reached that landmark after making a field goal and a free throw with eight minutes to play in the game.

“That was very important to me. I’ve been aiming for that for four years,” she said. “I think my teammates were the reason it happened. They got me the ball and all I had to do was execute.”