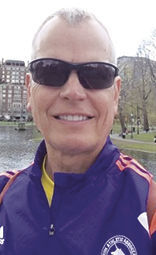 Tom Sawyer played college basketball at Mankato State University of Minnesota after graduating from McFarland in 1974. He now works at Franklin Fueling Systems.

File photo Tom Sawyer is carried off the court after the 1974 McFarland High School boys’ basketball team captured its second straight state title. Sawyer still lives in McFarland with his wife Barb. The two have been married for 41 years.

Tom Sawyer played college basketball at Mankato State University of Minnesota after graduating from McFarland in 1974. He now works at Franklin Fueling Systems.

File photo Tom Sawyer is carried off the court after the 1974 McFarland High School boys’ basketball team captured its second straight state title. Sawyer still lives in McFarland with his wife Barb. The two have been married for 41 years.

The roar of the crowd was deafening at the University of Wisconsin Fieldhouse as the McFarland High School boys’ basketball team took the court to play the semifinal game of the 1973 Wisconsin Interscholastic Athletic Association Class B State Championship. Junior Tom Sawyer, just 16 years old but considered the quarterback of the Spartans by Head Coach Sam Mills, was amazed by the number of people present.

Said Sawyer, “I remember looking in the stands and wondering ‘is there anyone left in McFarland?’ Crowd support was awesome. As a team, we were nervous but felt prepared. Coach Mills told us we deserved to be here and earned our way. The team was pumped emotionally, and we felt very confident.”

The Spartans jumped out to a 30-13 halftime lead against Crivitz, and outscored their opponents 26-8 in the fourth quarter to take a 68-31 victory. Sawyer scored 14 points and his teammate, center Bill Pearson, tallied 20. The victory set up a state title game between McFarland and Luck. The Spartans took a big lead at halftime, 31-18, but Luck put on a rally in the fourth quarter.

“With a big lead in the first half, we had a letdown coming into the second half and had to battle back. It was a case of underestimating our opponent,” Sawyer said. “There was a reason Luck was in the championship game. They had a tough team and deserve credit for taking it to us in the second half.”

Despite being outscored 18-7 in the fourth quarter, McFarland took the championship with a 51-49 win. Sawyer ended with 19 points and Pearson put in 20.

McFarland residents were excited about their team’s success and held a parade to honor the players and coaches. Team members and cheerleaders rode on a fire truck through town.

“It was an unbelievable feeling winning it all. The community came out in droves for the parade,” Sawyer said.

Five decades later, Sawyer still lives in McFarland with his wife, Barb. They have two sons, a daughter and eight grandchildren. Sawyer works at Franklin Fueling Systems as a buyer/planner. He still loves living in McFarland and has no regrets about raising his family there. He has led a happy and rewarding life.

Sawyer was born in Omaha, Nebraska and moved every time his father was transferred by the pipeline company where he worked. The Sawyers finally settled down in McFarland when Tom entered the third grade.

“McFarland was much smaller at that time and everyone knew everyone,” Sawyer said. “As a kid growing up, we’d go out in the morning and play with our friends all day. We just had to make sure to be home for lunch and dinner.”

Sawyer’s first love was baseball, and being a left-handed thrower, he dreamed of being the next Sandy Koufax, the Dodgers’ Hall-of-Fame southpaw pitcher. Sawyer’s father became a well-known baseball coach in the McFarland youth program.

Sawyer started playing basketball in the sixth grade and made it his primary focus after an arm injury ended his baseball hopes.

Sawyer grew to love basketball, and followed the careers of NBA stars Walt Frazier of the New York Knicks and Pete Maravich, who played for several teams including the Atlanta Hawks and New Orleans Jazz. Sawyer credited his father and coaches for helping him develop as an athlete.

Sawyer played on the junior varsity team as a freshman, but got a promotion to varsity before the end of the season. Freshmen playing varsity basketball was unheard of in the early 1970s.

“It was a challenge moving up to the varsity level and finding a comfort zone with some of the older players. It was nerve wracking at times. I didn’t want to be too outspoken with the older players,” Sawyer said. “A couple of players were key in helping me out in the transition: Dan Egner and Craig Howery. Both were great in encouraging me. Making the varsity team fueled me to raise the level of my game.”

Mills was a former drill sargeant in the Marines and applied his methods from the armed forces when coaching the Spartans,

“A no-nonsense coach who demanded your respect and stressed the fundamentals of the game” is how Sawyer described him. “He would definitely let you know if he felt you weren’t performing up to your standards or putting in the effort. Practices were demanding and competitive which carried over to the games.”

During Sawyer’s time at McFarland, the team was filled with talented players that would help the Spartans become state champions. The roster included Pearson, who would go on to play college basketball at the University of Wisconsin, Lew Harrison, Tim Dunston, Jim McFall and Sawyer. Pearson and Sawyer did much of the scoring, but Sawyer said every victory was a team effort.

“We had a talented roster. Some of the players that didn’t start on our team would have started for other schools,” Sawyer said. “Practices were competitive, making everyone better and prepared for game day. Coach Mills hung his hat on defense, he implemented and used a number of different defenses during games to confuse opponents. If you didn’t play defense, you’d find yourself sitting on the bench beside coach Mills.”

One of Sawyer’s teammates was Ray Kirch, who went on to play football at UW-Eau Claire and then became a successful coach and athletic director at several high schools in Minnesota and Wisconsin, including McFarland. He said Sawyer was one of the Spartans’ more savvy players and had the responsibility of orchestrating plays signaled from the bench by Mills.

“He seemed to know where everyone was supposed to be. He was a great ball handler and dribbled behind his back way before his time,” Kirch recalled. “When he did this, the opposing crowds would go ‘ooooooh....’ They assumed he was a hotdog, but he discovered he could change directions on a defender much faster and safer if he went behind the back. It was fun to watch from the bench.”

After winning the 1973 state title, McFarland came back the following year confident it could repeat as champions.

“We were returning almost our complete roster, so we felt we were in the driver’s seat and controlled our own destiny,” Sawyer said.

Indeed, McFarland returned to State in 1974. The semifinal contest went down to the wire before the Spartans pulled out a 48-45 win over Marathon. Pearson led with 19 points, Harrison had 8 and Sawyer wound up with 7.

The Spartans got off to a good start in the championship against Mineral Point and led 33-21 at halftime and 51-33 after three quarters.

Sawyer found his shooting touch by hitting 12-of-21 attempts from the field and leading McFarland with 26 points in a 65-43 victory. Pearson had 19 points and McFall also reached double figures with 10.

“It was extra special considering we had a senior-dominated roster, it was our last game together and it capped off an undefeated season,” Sawyer said. “Since it was my last game as a Spartan, it felt special to be able to contribute the way I did in the championship game, but it’s really a credit to my teammates to put me in the position to succeed.”

The Spartans ended the season with 37 consecutive wins.

After graduating from McFarland, Sawyer played college basketball at Mankato State University in Minnesota, but returned to UW-Madison to earn his degree.

Eventually, he found work at Franklin Fueling System, a short drive from McFarland High School where his basketball dreams were fulfilled nearly five decades ago.

Sawyer has been married to his wife, the former Barb Egner, for 41 years.

She is the brother of Sawyer’s former teammate Dan, and rooted for her future husband on the sidelines as a cheerleader.

“I always tell her I would have scored more if she wouldn’t have been such a distraction on the sideline,” Sawyer said.

The two would raise their family in McFarland and stay connected to where they both grew up.