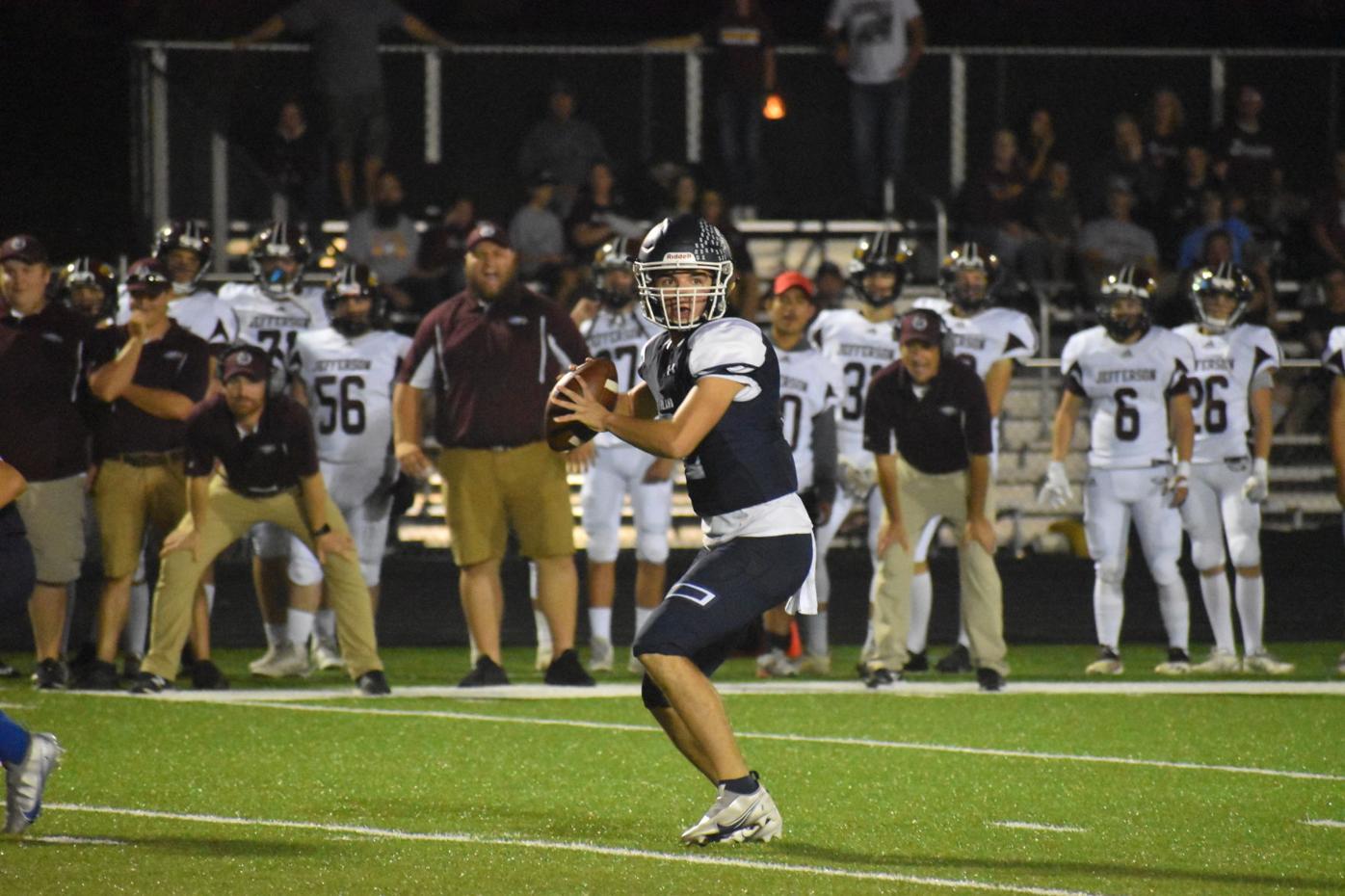 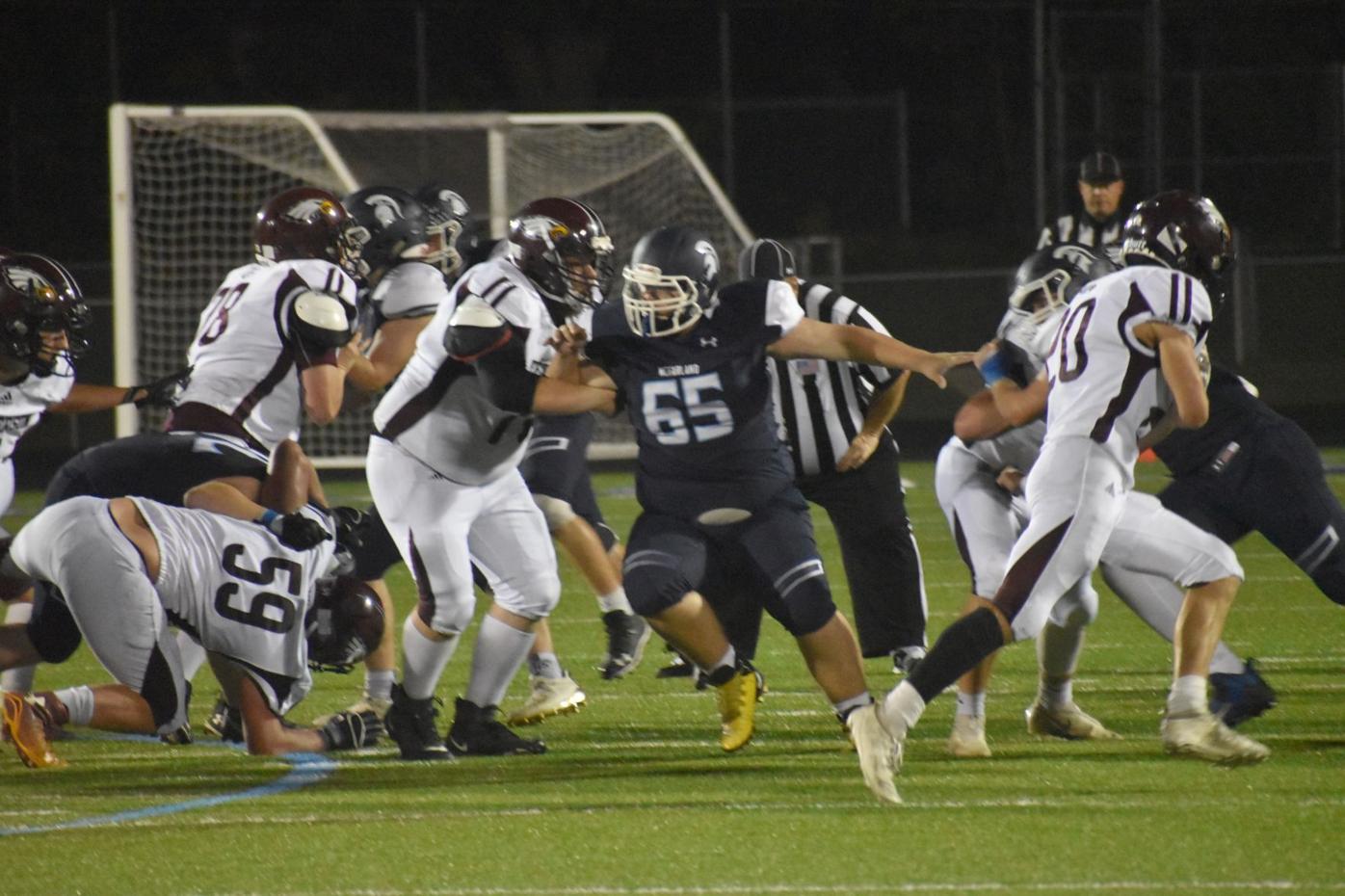 Senior defensive lineman Miller Roeder looks to get off a block against Jefferson on Friday, Oct. 1. 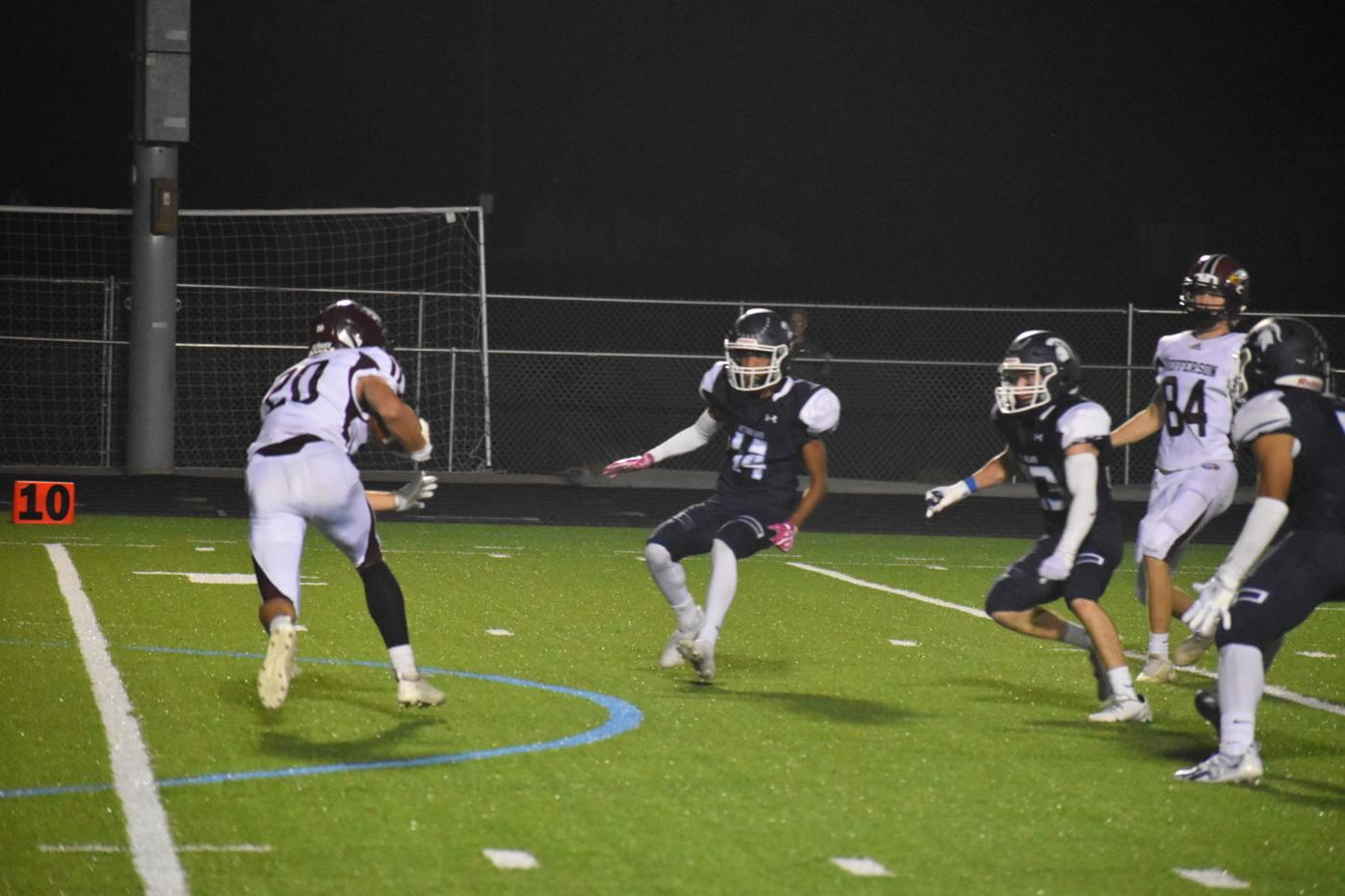 Junior defensive back Tradyn Randolph looks to make a tackle on a kickoff return against Jefferson on Friday, Oct. 1. 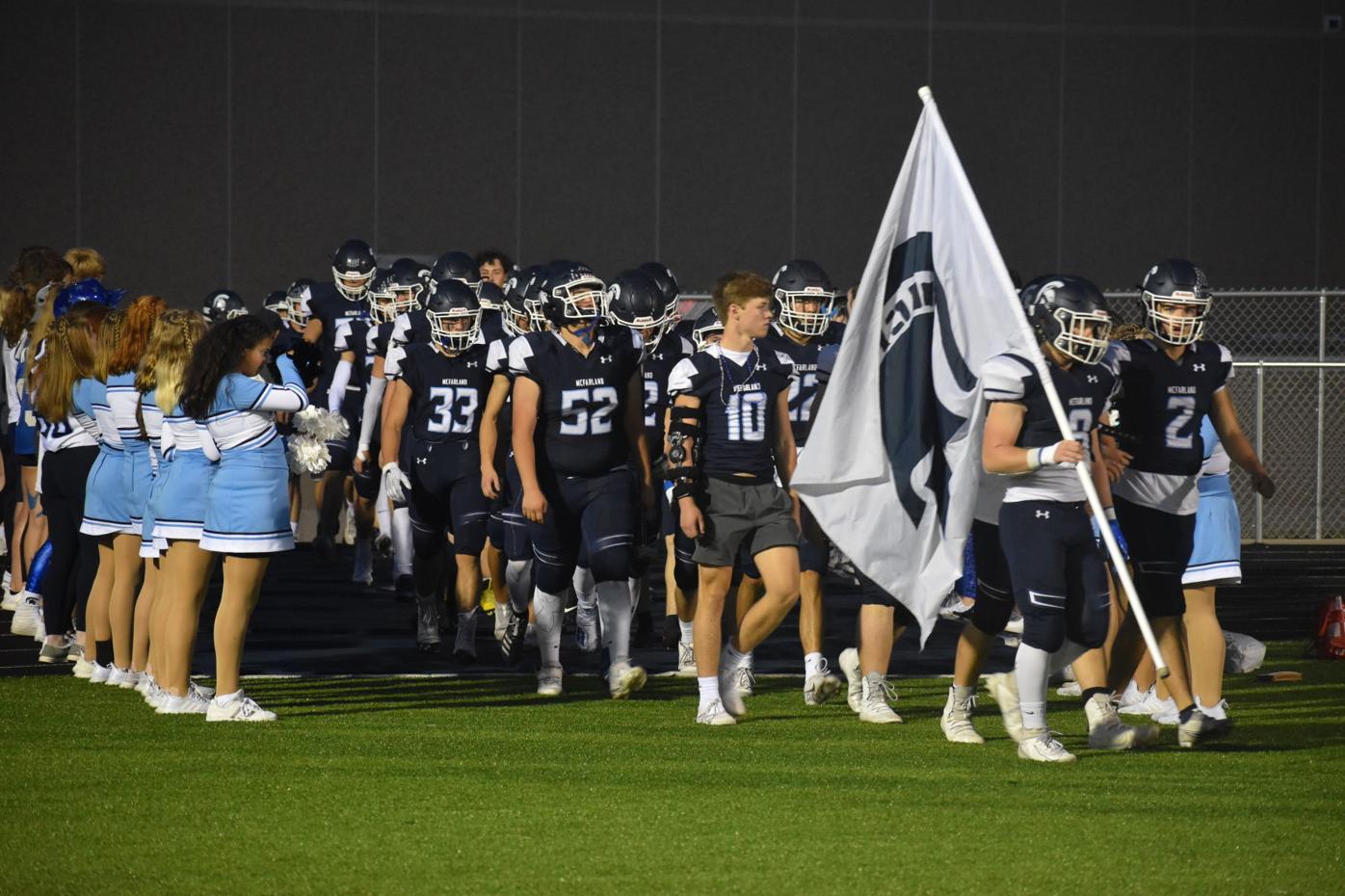 The McFarland Spartans take the field for their homecoming game against Jefferson. 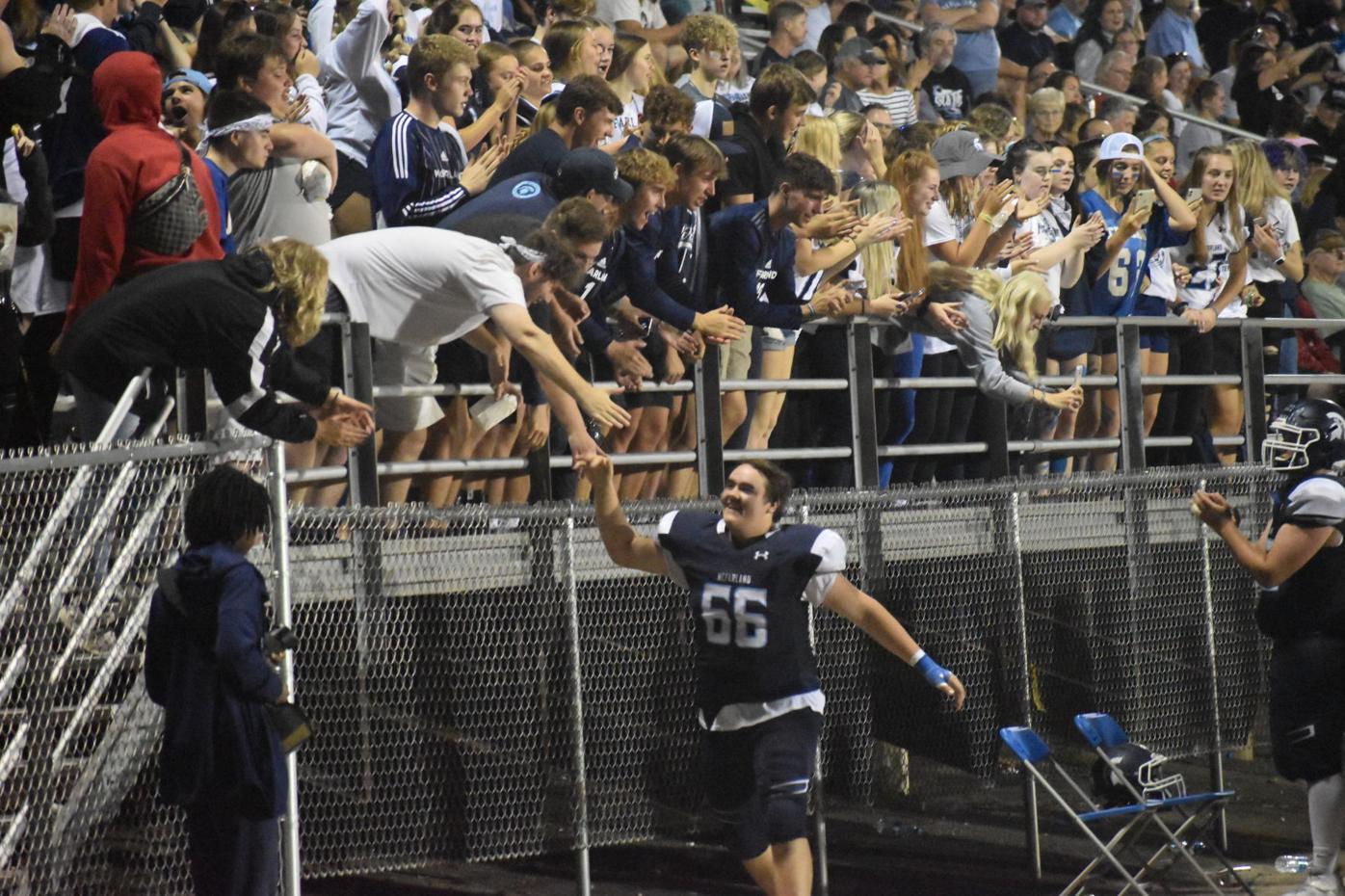 The McFarland Spartans fought tooth-and-nail, but could not come out with a win on Homecoming, losing to Jefferson 27-21 on Friday, Oct. 1.

Jefferson scored with a run-heavy drive with 3:07 left in the first quarter after Brady Gotto scored from two yards. Lukas Frank added the extra point, putting the Eagles up 7-0.

Senior defensive lineman Miller Roeder looks to get off a block against Jefferson on Friday, Oct. 1.

McFarland responded with a long touchdown drive of its own as senior running back Chase Quelle scored from a yard out. Junior kicker Mason Folk added the extra point to tie the game.

Jesse Holler of Jefferson broke off a long run with 8:12 left in the second quarter, running 45 yards to give Jefferson the lead back at 14-7 after Frank added the extra point. Undeterred, the Spartans responded with another touchdown drive, aided by a trick play where wide receiver Dadon Gillen threw a deep pass to an open Quelle, who was brought down in Jefferson territory. Junior running back Travis Zadra punched in a touchdown run with 6:07 left in the second, with Folk adding the extra point to tie the game at 14-14.

Gotto made another touchdown run for Jefferson, this one from 53 yards. An extra point by Frank put the Eagles up 21-14 with 3:55 left before halftime. The Eagles got the ball back before the end of the half and drove down the field, but the Spartans defense rallied to keep Jefferson out of the end zone and the deficit at 21-14.

In the second half, the McFarland defense made some adjustments to slow down the Jefferson rushing attack, getting a key fourth down stop with 6:37 left in the third quarter.

“Defense came out and made some adjustments, bottom line is we just had to stay with our keys. Be a little bit more disciplined football. I was pleased with the defense in the second half, but pleased with the kids overall,” said Ackley. “They played a great football game.”

Junior defensive back Tradyn Randolph looks to make a tackle on a kickoff return against Jefferson on Friday, Oct. 1.

With the momentum on their side, the Spartans took a shot through the air. Junior quarterback Cooper Kennedy threw a deep pass down the sideline to Gillen, who scored on the 57-yard pass and tied the game at 21 after Folk added the extra point.

“He put the ball where he had to put it. I thought he did a nice job, he got out of the pocket when he had to, I thought we ran the ball very well. I give a lot of props to the offensive line, they did a nice job of controlling the inside gaps really well,” said Ackley.

With 6:20 in the fourth quarter, Jefferson scored on a seven-yard run by Gotto. However, the extra point was missed, giving McFarland a chance to win the game on their next drive.

McFarland got the ball past the Jefferson ten-yard line, however a couple of run attempts brought up fourth down at the Jefferson four-yard line. After McFarland called a timeout, Kennedy threw a fade to the corner of the end zone where Kulp jumped up and almost hauled in the touchdown pass, but the ball fell incomplete.

“It comes down to having a shot to win the game and we put the ball where it had to be and we did the best we could, Deven made a great effort at it, it’s a tough catch,” said Ackley.

Kennedy went 10 of 22 for 134 yards and a touchdown. Quelle was the leading rusher for the Spartans with 93 yards on 24 carries with a touchdown.

Jefferson got a first down to help run out the clock, giving them the 27-21 victory. McFarland (3-4) will look to clinch a playoff spot next week at Monroe (5-0) at 7 p.m. on Friday, Oct. 8. The Spartans are 3-2 in conference and in fourth place in the Rock Valley Conference standings.

The McFarland Spartans take the field for their homecoming game against Jefferson.