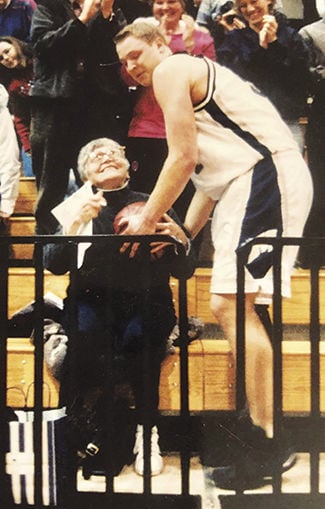 After eclipsing the 1,500-point mark with the McFarland High School boys’ basketball team in 2002, Matt Hockett presented the game ball to his grandmother Marian Peterson, who faithfully attended most of her grandson’s sporting events. 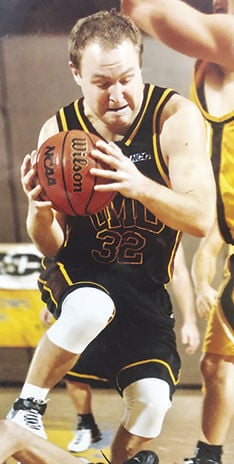 After graduating from McFarland High School in 2002, Matt Hockett signed on to play for the University of Minnesota-Duluth men’s basketball team. He would later serve as the team’s assistant coach and earned his Master’s degree from the school in 2018.

After eclipsing the 1,500-point mark with the McFarland High School boys’ basketball team in 2002, Matt Hockett presented the game ball to his grandmother Marian Peterson, who faithfully attended most of her grandson’s sporting events.

After graduating from McFarland High School in 2002, Matt Hockett signed on to play for the University of Minnesota-Duluth men’s basketball team. He would later serve as the team’s assistant coach and earned his Master’s degree from the school in 2018.

It was Feb. 7, 2002 when senior Matt Hockett attained one of the most significant records in McFarland High School boys’ basketball history. He scored his 1,500th career point as the Spartans defeated Stoughton 72-54. Afterwards, Hockett presented the game ball to his grandmother who was in attendance.

Unlike some of today’s sports figures who are never shy to tell people about their accomplishments, Hockett approached high school and college sports with some humbleness and gave credit to others for his success.

Aside from his feats on the basketball court, Hockett also thrilled McFarland fans with his abilities on the football team and played among the best athletes in the WIAA boys’ state tennis tournament. Nearly two decades after his high school athletic career ended, Hockett is now the assistant men’s basketball coach at UW-Stevens Point. His road to become a coach of the Pointers was quite a journey, and there were a lot of positive influences that helped him achieve his goals.

Hockett began on the McFarland football team as a freshman in 1998.

Two years later, Hockett was part of a McFarland football squad that finished 9-0 in the regular season and qualified for the WIAA Division 3 playoffs. He said head coach Scott Rice and several teammates helped him become a success on the playing field.

“Coach Rice taught me more than just on field Xs & Os, but more importantly the significance of the weight room. Because of him, I was able to hit the ground running my freshman year in college, and never looked back,” Hockett said. “Teammates J.P. Kinder, Jon Severson, Brock Roder and Eric Morehouse took me under their wing and showed me what true leadership was all about. My experience as a Spartan wouldn’t have been the same without them.”

The Spartans won in the first two rounds of the playoffs, but lost 35-14 to Waunakee.

The 2001 Spartans returned to the playoffs after a 7-2 regular season mark. After a 24-21 win over River Valley in the first round, Waunakee spoiled things for McFarland again with a 43-17 triumph. Hockett was unanimously named All-Badger South Conference first team at tight end, linebacker and punter.

In basketball, Hockett was coached by Chuck Kubicek, who also provided him with some valuable life lessons.

“The biggest thing I learned from coach didn’t take place between the boundaries. He took an interest in me far beyond the basketball court, and that connection carried long past graduation,” Hockett said. “When I got married, coach was there. When I won my first conference championship as a high school coach, coach was there. He really taught me how to care for players long after they leave my gym.”

Then there was Hockett’s successful tennis career at McFarland, first under head coach Robert Renslo for three years and then Tod Lacey as a senior.

Hockett took sixth place at the boys’ state tournament in 2000, and qualified the next year after finishing with an 18-1 record. He won two matches and took home third place.  In 2002, his senior season, Hockett entered the tournament with a 21-0 record and again left the courts with a third-place showing. Advice provided by Renslo and Lacey would help Hockett when he became a coach.

“I couldn’t have asked for better mentors in the sport, and wouldn’t be a head coach in the WIAC (Wisconsin Intercollegiate Athletic Conference) without their influence,” Hockett said.

After graduating from high school in 2002, Hockett entered the University of Minnesota-Duluth where he played on the men’s basketball team under head coach Gary Holquist, who also had a major influence in Hockett’s sports career.

“He opened the door for me to play at UMD, pushed me to reach my maximum potential both on and away from the floor, and opened doors for me in the coaching world I never thought possible,” Hockett said.

While the Bulldogs were not one of the more successful teams, Hockett became a student of the game with hopes he could make coaching his future career.

In 2007, Hockett earned his degree in physical and health education. A year later, he was hired as a teacher in the Stoughton school district and named the boys’ head basketball coach in 2009.

The 2013 Vikings reached the Division 2 boys’s state tournament for the first time since 1939. Stoughton lost to Wisconsin Lutheran in its first-round game at Kohl Center, but Hockett still remembers the support he received from the city.

“I wouldn’t be where I am today without the players and people from the Stoughton community,” he said.  “The town truly rallied behind our basketball program, and the six years I spent there as head coach I will always cherish.”

In 2015, Hockett packed his bags again and returned to Duluth to be the men’s assistant basketball coach at UMD. Three years later, shortly after finishing his Master’s degree in Duluth, Hockett accepted the job as men’s assistant basketball coach at UW-Stevens Point. His wife Ann and two children made the trip to northern Wisconsin and they have now been there for two years.

Last July, Hockett was named the university’s head women’s tennis coach, fulfilling his dream to be a head coach one day.

With his life going in the right direction, Hockett credits his days as an athlete in McFarland with helping him not only be a good coach and community member, but a great husband and father.

“When our Stoughton team made the state basketball tournament, high school principal Jim Hickey and athletic director Paul Ackley wished me and our team well on the Jumbotron that sits in front of the school, some 11 years after my graduation,” he said. “I learned the importance of family from the school district of McFarland, and have carried that with me in my career pursuits.”