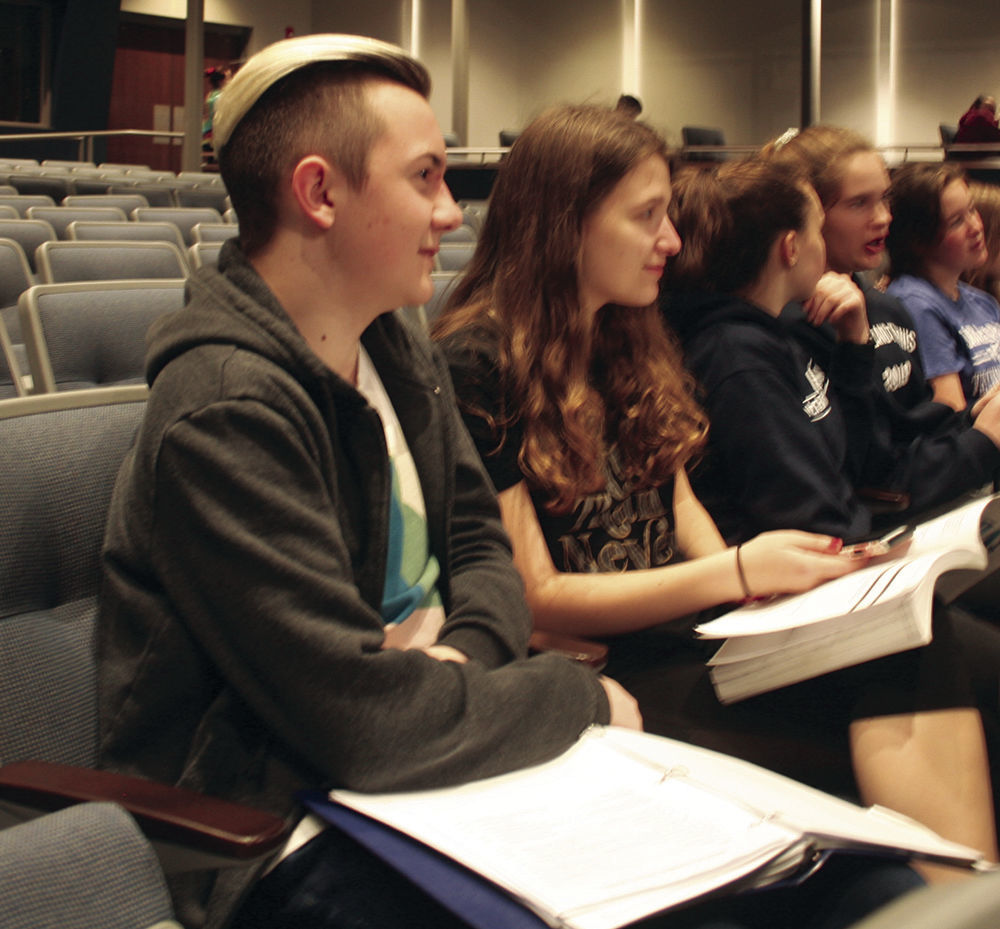 Ty Swaney, left, and Lily Gregg rehearse vocal parts from “Mamma Mia!” from the seats. The Swaney siblings and Gregg siblings formed friendships with one another through the MHS music program. 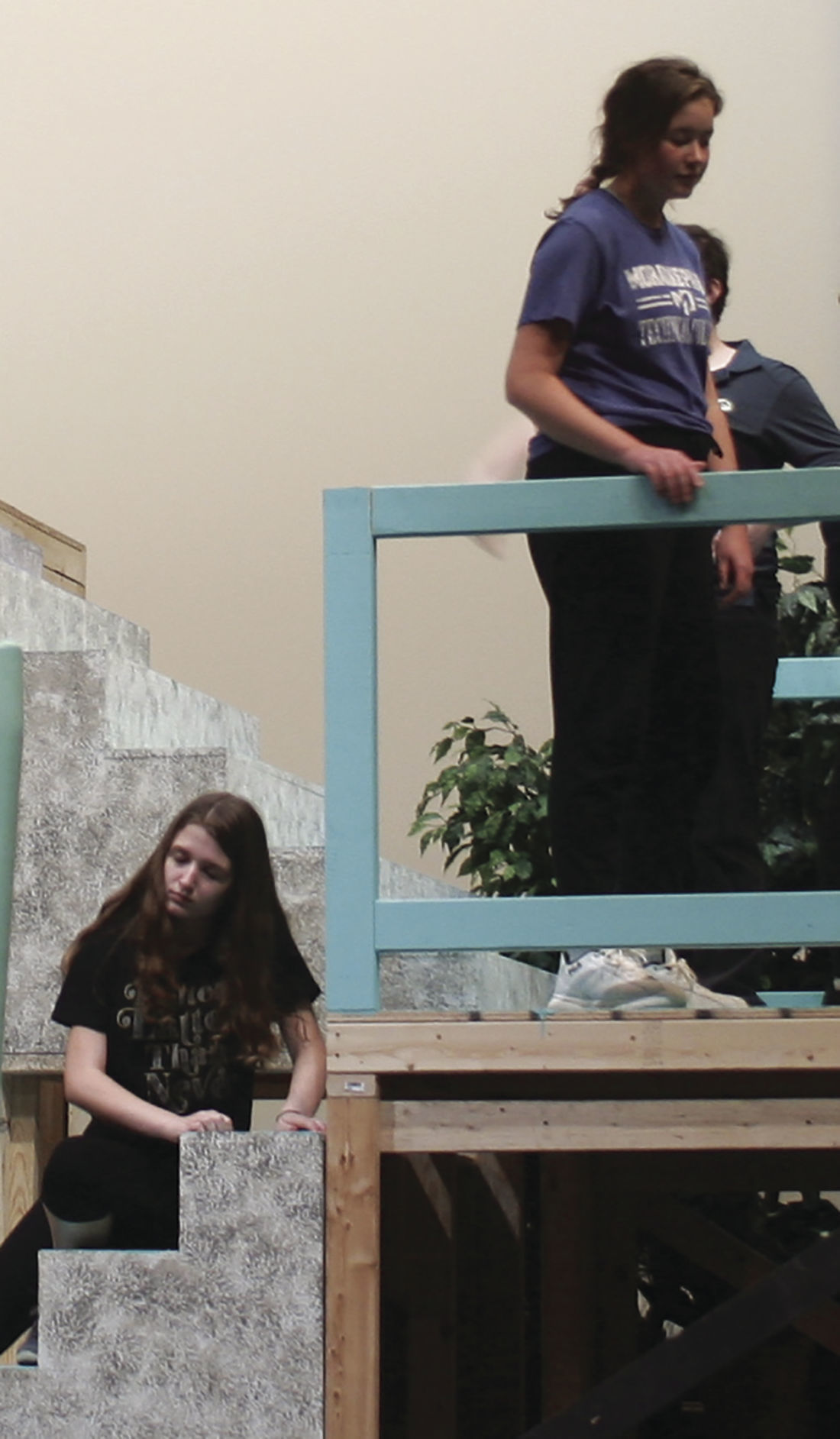 Lily Gregg, left, and Emily Schoeller rehearse their roles as they mark the beginning of a musical number.

Ty Swaney, left, and Lily Gregg rehearse vocal parts from “Mamma Mia!” from the seats. The Swaney siblings and Gregg siblings formed friendships with one another through the MHS music program.

Lily Gregg, left, and Emily Schoeller rehearse their roles as they mark the beginning of a musical number.

For a musical about finding family, it seems fitting to have actual families in the cast.

“We picked it because the music is so amazing,” director Patrick Fernan said about the musical.

The music is from ABBA, with songs well-known and well-loved by many.

The musical follows the journey of Sophie as she tries to find her family before her wedding.

Of the 40 students in the show, there are three sets of siblings.

“This is my eighth year directing at McFarland, and it’s the first time we’ve had to many siblings in the show for sure,” Fernan said.

He said that the number of siblings creates even more camaraderie and a family environment among the cast.

“I think having siblings who already know each other and can work well with each other enhances that,” he said.

“I feel like it’s a good environment, because we’re helpful to each other versus like trying to tear each other down,” junior Emma Swaney said.

Emma Swaney began choir in fifth grade and became involved with musicals in middle school. She encouraged her brother to join. She and her brother, Ty Swaney, are both part of the ensemble.

“I just joined and then I had a lot of fun and I was like, ‘I want to do this again,’” Ty Swaney said.

They felt that being in the show together has strengthened their sibling bond.

“I think we’re really good friends, so it helps us further bond through the experience of just being able to being the show,” he said.

The pair became friends with one another’s friends, including the Gregg siblings.

“We’re so used to having separate lives and we come here, and we formed a lot of the same friend groups, especially since I’m so used to him being my older brother,” freshman and ensemble member Lily Gregg said.

“When you have two people who have had a rivalry for a long time, and then tell them, ‘All right you’re hanging out with the same group of people for a long time,’ there’s going to be some almost competition for attention inevitably,” Eli Gregg said.

The junior is playing groomsman Eddie.

However, the two agreed the musical cast is like a family. Their father, Paul Gregg, is the music director for the production.

“It’s so strange, because most of the time it doesn’t feel like that. It feels a lot like one big friend group and sometimes I forget that my brother’s here,” Lily said.

She added that having an older sibling in the cast helped her transition from middle to high school productions.

“And it’s sort of nice to have someone who knows me and knows what I have difficulties with,” he said.

He admits that he has two left feet and sometimes has difficulties remembering the schedule. His sister helps him with dancing parts and knowing which days they have rehearsals.

Emily Schoeller has been in choir since fifth grade and started musicals in eighth grade. The freshman’s mother wanted her sister to join so they could spend more time together.

“I just like honestly being able to see her, because I usually have things after school or during school, so just being able to bond with her more is great,” she said.

Her sister has Rett Syndrome, a neurological disorder that prevents the person from performing physical functions, such as speech, walking or properly moving hands.

Mackenzie Scholler is part of several musical numbers and accompanied on stage by her caretaker.

“I get to see her in her school element, because I usually didn’t get to,” she said.

She is also excited to be a student for two years in high school with her sister and fellow ensemble member.

“There’s a lot of just talking about the musical, listening to all the songs, watching the movie on repeat,” Emily Schoeller said.

“The new theater offers us so much flexibility to help our students improve their technical skills and to make the viewing experience better for our audience,” said director Brooke Hauser.

“This has been a real joy to have this, with the kids and our production team back again to work together to put on the first musical in our brand new performing arts center,” Fernan said. “We can’t wait to put this show up in front of the MCF public. We’re excited about what we’re going to bring to the table.”

Melissa Mendl is the choreographer, Bernie Friedman is the costume mistress, and Michael Gray is the set designer.