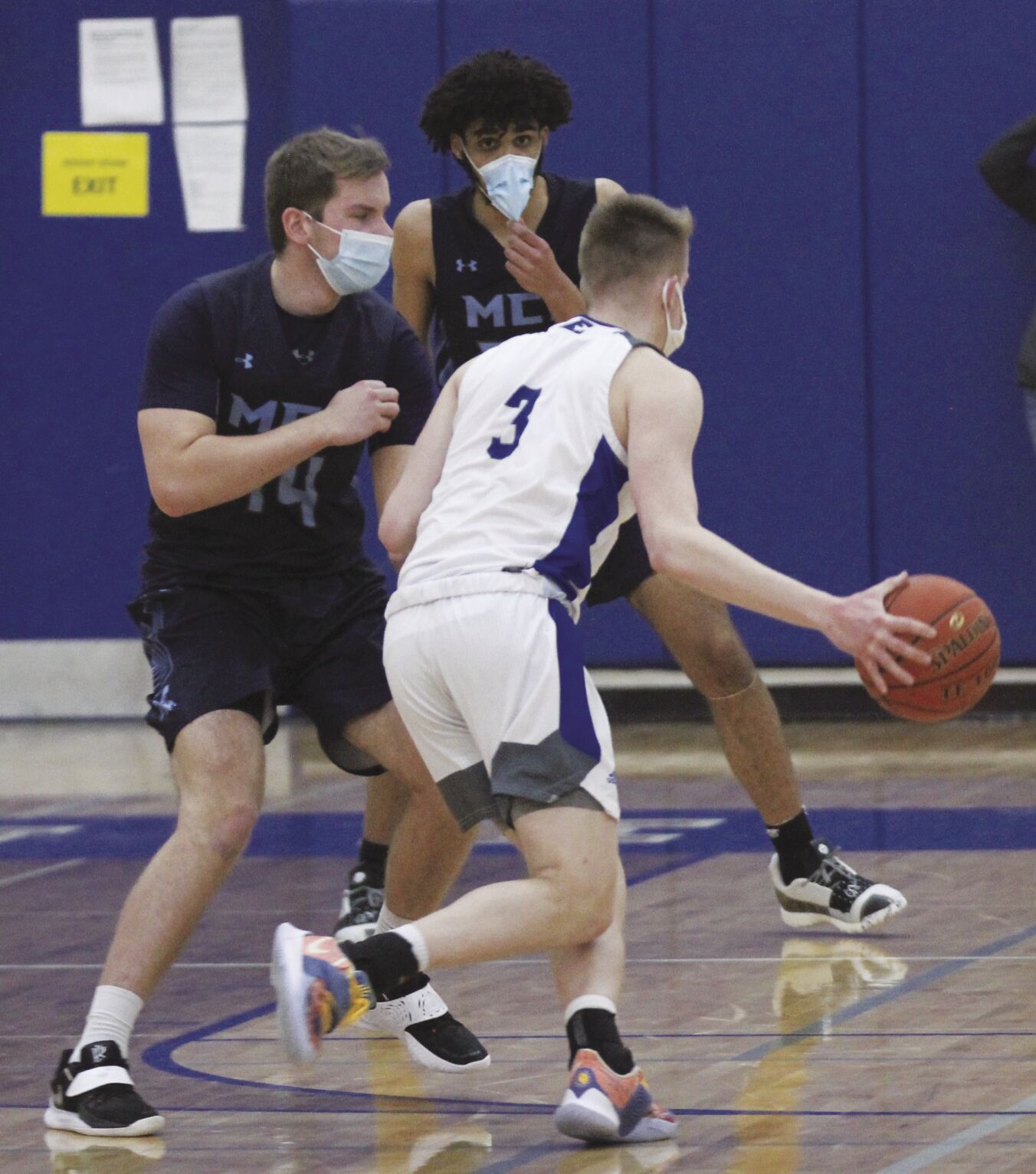 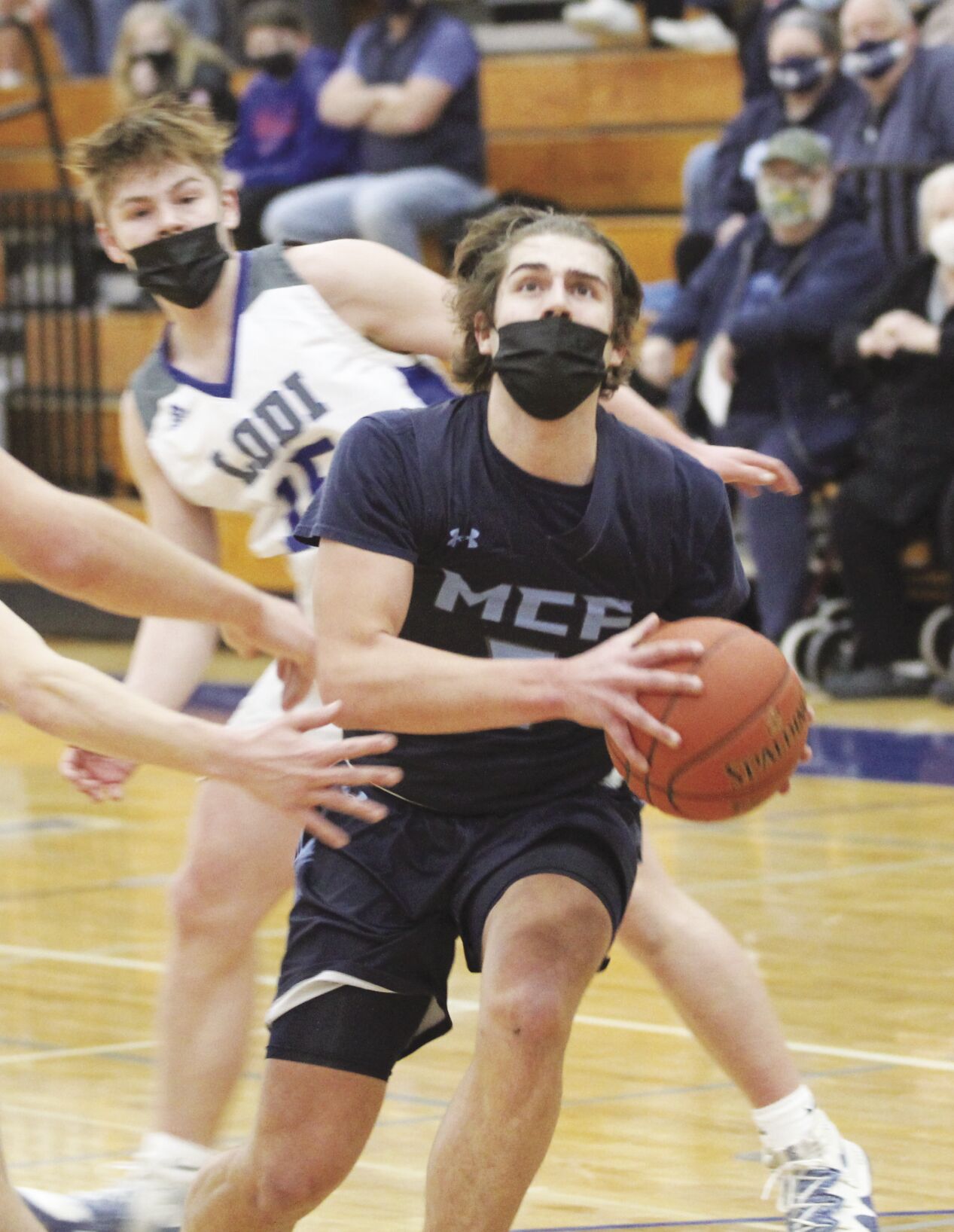 Jackson Werwinski makes through a sea of arms and bodies on his way to the hoop in Friday's WIAA Division 2 regional game between the McFarland High School boys' basketball team and Lodi. Werwinski had 12 points as the Spartans upset the Blue Devils, 66-57. McFarland plays in the regional final Saturday Feb. 20 against Madison Edgewood at Sauk Prairie High School.

Jackson Werwinski makes through a sea of arms and bodies on his way to the hoop in Friday's WIAA Division 2 regional game between the McFarland High School boys' basketball team and Lodi. Werwinski had 12 points as the Spartans upset the Blue Devils, 66-57. McFarland plays in the regional final Saturday Feb. 20 against Madison Edgewood at Sauk Prairie High School.

Like it has throughout the COVID-19 shortened season, defense played the key role for the McFarland High School boys’ basketball team Friday Feb. 19 at Lodi in a Wisconsin Interscholastic Athletic Association (WIAA) Division 2 second-round regional. The Spartans’ defense frustrated the Blue Devils, and the result was a 66-57 McFarland victory, which puts the team in the regional final game Saturday night against Madison Edgewood at Sauk Prairie High School.

The No. 4 seeded Crusaders upset No. 1 Sauk Prairie 52-49 Friday night.  McFarland is a No. 3 seed, but has to play the Saturday game outside Dane County due to crowd gathering restrictions enforced to reduce spread of the COVID-19 virus. The triumph boosted McFarland’s record to 8-4.

“Our defense is carrying us right now. Our intensity, our willingness to attack other offenses and try to get them uncomfortable,” said McFarland Head Coach Jeff Meinholdt. “I think we did that. It led to Lodi taking some poor shots and led to us scoring on the other end.  We took our best punch tonight, that’s for sure.”

“We knew our defense was going to be the key,” said senior guard Pete Pavelec, who led the Spartans with 22 points. “We had a good defense all year long, and we just had to keep that up while the offense was getting better every week.”

Pavelec got the Spartans’ offense off to a good start by hitting three 3-pointers of the first half to open an 18-5 McFarland lead at the 10:10 mark. Blake Kes’ three put the Spartans on top 25-12 and other key buckets by Aidan Chislom and Garrett Larson led to a 31-19 halftime lead.

Lodi scored the first seven points of the second half to close within 31-26 and lowered the lead to 48-45 with 4:30 to play. But a bench technical foul by the Blue Devils seemed to tip the game McFarland’s way as Pavelec hit two free throws and Chislom added two more to put McFarland ahead 56-47 with 2:41 remaining. McFarland didn’t score a field goal in the final three minutes, but free throws by Pavelec and Jackson Werwinski sealed the victory.

Meinholdt was impressed with his team’s mental toughness when Lodi appeared to have it on the ropes.

“We told our guys in a playoff game they are going to have some ups and downs,” he said. “They weathered everything Lodi threw at them. We were always getting that key stop, key rebound, key basket, whatever we needed, it was just a total team effort tonight. We weathered some storms and mentally handled them very well.”

Larson, who had six points, said fighting for rebounds was difficult against Lodi’s talented athletes.

“They had some big, long athletic guys, so you had to fight for position to get to the ball,” he said. “Even though we were the lower seed, we knew we just had to follow our game plan.”

Werwinski had 12 points, and Chislom and Kes both reached double figures with 10 points each.

McFarland lost to Madison Edgewood 54-52 in a Feb. 4 regular season game at Lakeside Lutheran High School.  Werwinski led McFarland with 24 points, but the Crusaders had three players in double figures: Michael Regnier and Isando Jiminez both had 16 points and Ben Newton had 12.  With Friday night’s win over Sauk Prairie, Edgewood had a record of 11-12.