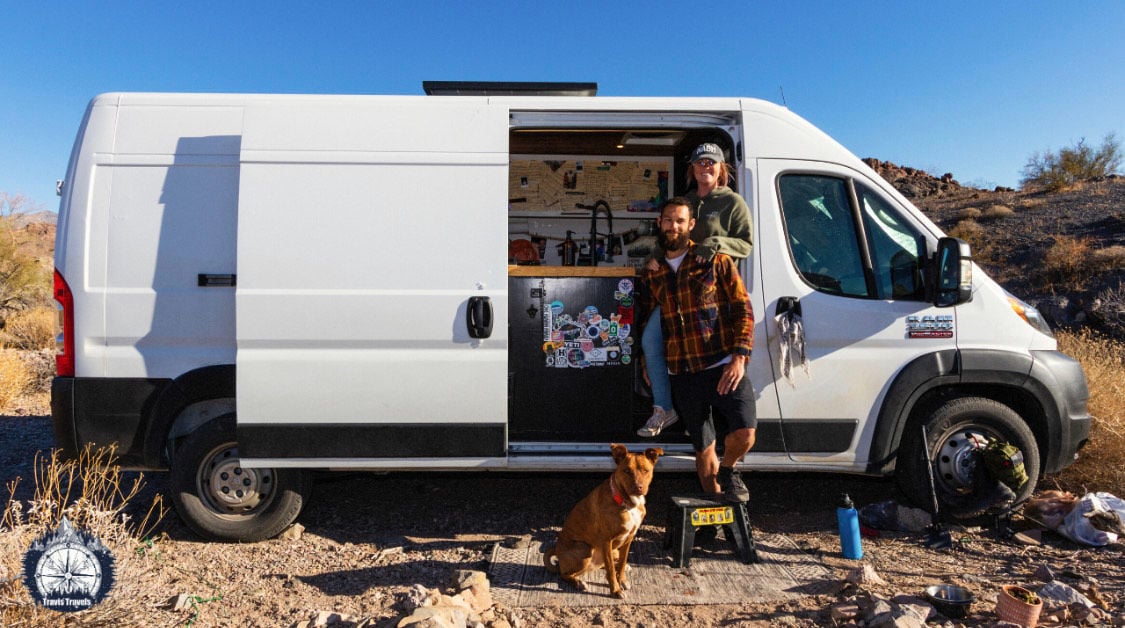 Corey and Shauna Bauhs and their dog, Willie Nelson. The Bauhs have been on the road in their van since July of 2020. 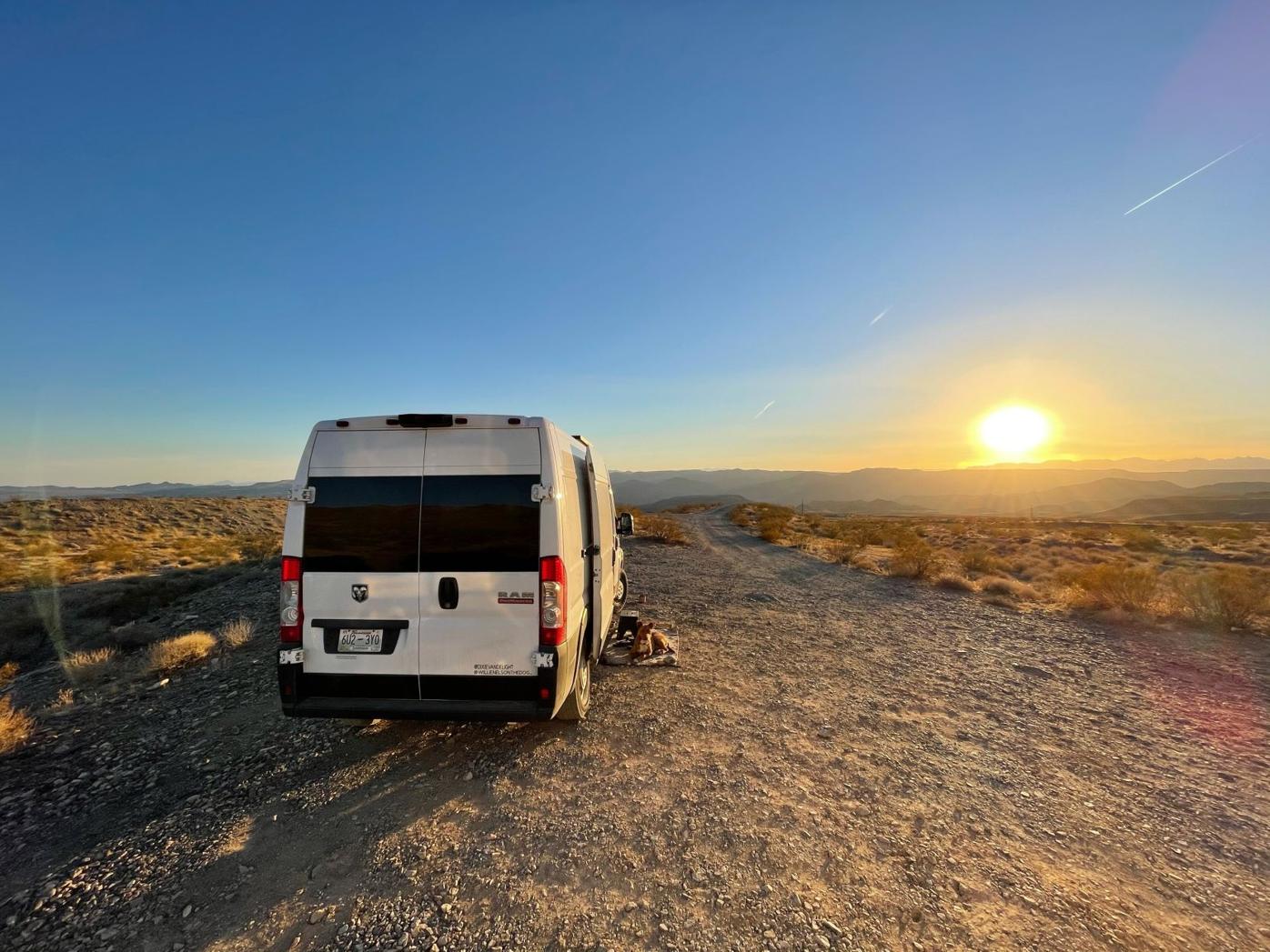 Corey and Shauna Bauhs purchased this van in March of 2020, and by July, they were on the road.

Corey and Shauna Bauhs and their dog, Willie Nelson. The Bauhs have been on the road in their van since July of 2020.

Corey and Shauna Bauhs purchased this van in March of 2020, and by July, they were on the road.

At some point, everyone wishes they had sold everything and made a life of travel, Corey Bauhs says. For Bauhs and his wife Shauna, they’re actually doing it.

The Bauhs have been on the road in their converted van since July of 2020. The pair, both McFarland High School graduates who got married in 2018, were living in Nashville when the COVID-19 pandemic hit. They had been living there for about six years, working as bartenders on Broadway, at the heart of Nashville’s nightlife.

Shauna, a 2009 MHS graduate (maiden name O’Malley) said in their six years in Nashville, the city had changed and become a city surrounded with travelers and people coming to the city to experience it, but the Bauhs “were the ones staying in place.”

That has certainly changed. A week before the COVID-19 reality really sat in, on March 4, they had purchased a Ram 2500 van. Initially, they were looking at heading to Oregon to find work, and they would have thought about selling the van. They weren’t planning on living out of it, but now those $450 monthly vehicle payments are also rent.

When COVID began making its way through the United States last spring, the Bauhs moved back to McFarland to renovate the van, and then they hit the road.

Since then, they’ve been to more than 20 states and put more than 20,000 miles on the van. They began in Wisconsin, driving through and visiting a number of state parks, as well as Lake Superior and the Mississippi River.

From Wisconsin, they made their way down to Key West, Florida, where they stayed for about two months. After that, they drove along the gulf coast to near Ehrenberg, Arizona, a town of about 1,500 people, and spent some time near Lake Havasu, Arizona.

As of last week, they’re now residents of South Dakota. They said they may try to stop in South America and the Baja California Peninsula of Mexico if the borders are open at some point in the future, although where they live could change at any moment.

“You kind of figure out where you’re going at the gas station wherever you’re at,” Corey, a 2007 MHS graduate, said. “You kind of just feel out the community. You don’t want to be rude or overstepping your boundaries while you’re living nomadically, so you want to be really conscious of that. Sometimes you just know when it’s time to move on. I know that’s super cliche, but you just get a sense that ‘we’ve moved past this.’”

Sometimes, their nights are spent in Walmart parking lots. Other nights, it’s on public land, where they can often stay for periods of a week or two.

Two of the most common questions they get when they talk about life on the road relate to the bathroom – first, where do they go? Second, where do they shower?

The van has a composting toilet (bougie, Shauna says) and an outdoor shower, for which they carry about 40 gallons of water.

Sometimes, showers take place at a gym, a truck stop, or with a damp rag.

The van also has a fridge, stove, and just about everything they need, all packed into about 40 square feet.

Corey said if he could give advice to himself a year ago, it would have been to tape off 40 square feet in his apartment to try and fit everything he needs into that space.

He said he misses owning some things, like his truck and motorcycle. Shauna misses her bathtub. But overall, this change has been a positive one for the couple as they experience all that the United States and life on the road have to offer.

“Your life is worth living,” Shauna said. “We were so caught up in our own fear… that we didn’t do things we wanted to do, that we were too afraid to try. It’s hard to put yourself out there sometimes.”

Shauna is a life coach, which serves as the couple’s main source of income while they’re on the road. Beyond that, they sometimes deliver food with UberEats and take side jobs such as helping people do tasks like assemble furniture – “a nomadic private contractor of sorts,” as Corey puts it.

The Bauhs also spoke of “very intimate conversations” they’ve had with people they’ve met on the road, and a sense of “fearlessness” among people just trying to live life. On Easter, they wrote on Instagram that they were welcomed into strangers’ homes to talk about their story and celebrate the holiday.

“You get a wonderful sense of what this country is about once you turn off all the other noise,” Corey said.

They don’t feel a lot of judgement from people on the road. Sure, Corey says he may get a couple of looks while he’s doing yoga in public, but they haven’t had any negative interactions with anyone so far, though some people might see them as hippies. They’d even call themselves that.

“We would probably say that we are hippies, so that’s not super offensive to us,” Shauna said. “We’re hippies who are open to changing people’s minds about it.”

Last month, in an effort to help more people living alternatively, they launched a nonprofit, the Blue Orchid Collective, which according to the Bauhs’ Instagram page, @dixievandelight, “serves those living alternatively, no matter by choice or by force, by providing small business incubation services, and community-driven development and support services.”

Future phases for the project include helping launch businesses owned by people living alternatively, deploying meal centers to help the homeless, purchasing land for “eco-villages and mobile communities” and more.

Shauna says they’re “on that no-plan plan.” While they miss family, it’s also hard to go back to living a ‘normal’ life when you’ve experienced the freedom of the road. But never say never.

“We absolutely love McFarland,” Corey said. “McFarland made us. We tell a lot of people about it…”