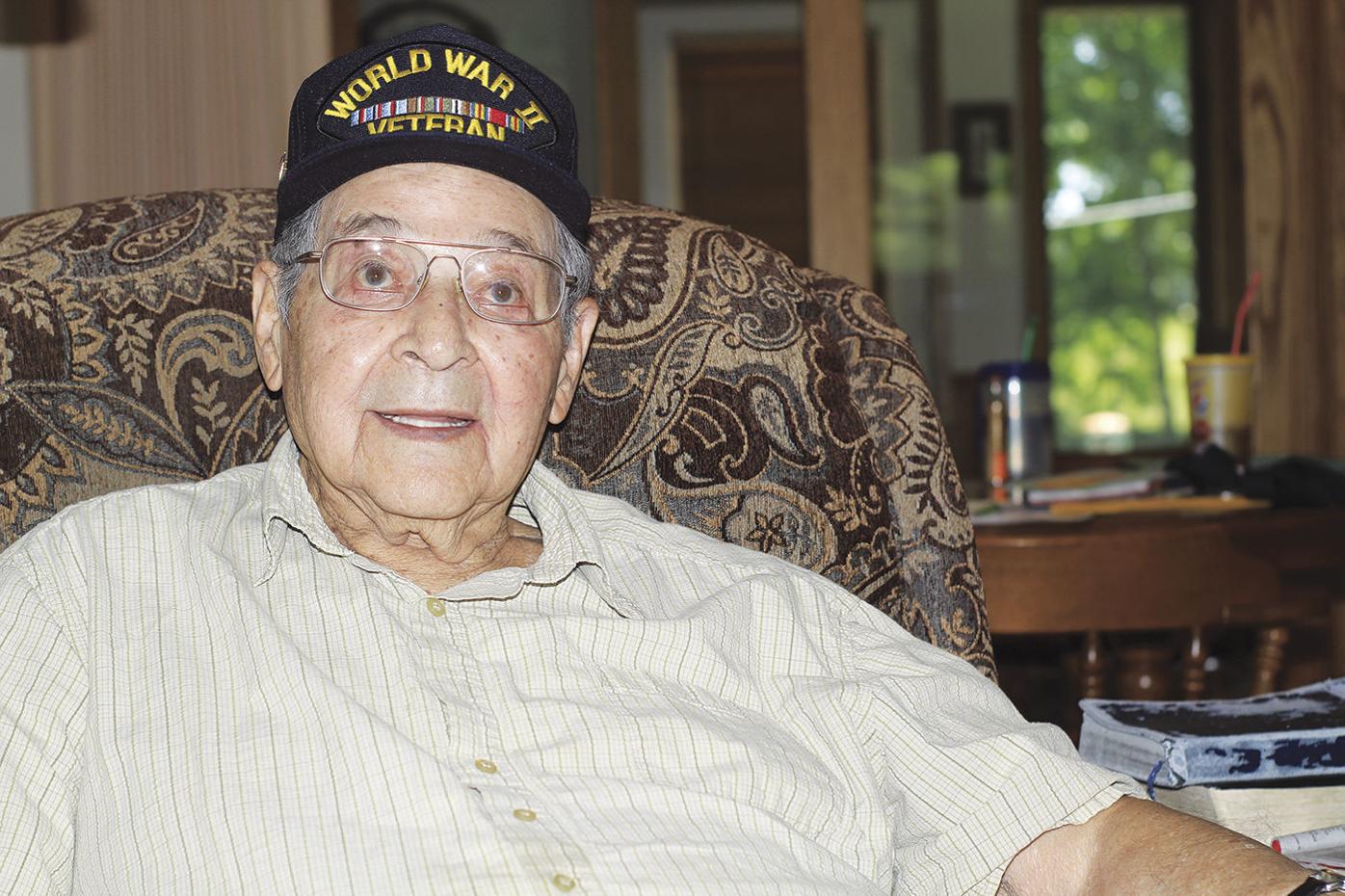 World War II veteran Walter Whitehorse spent nearly four years in the Navy, first enlisting at age 16. He served as a radarman aboard the USS Herndon and USS Catoctin. 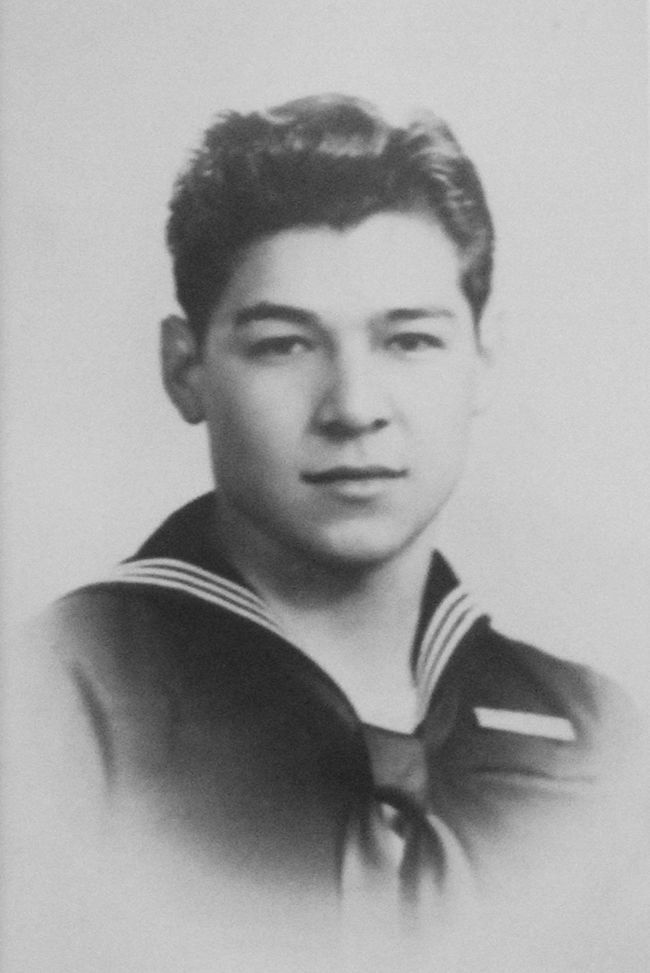 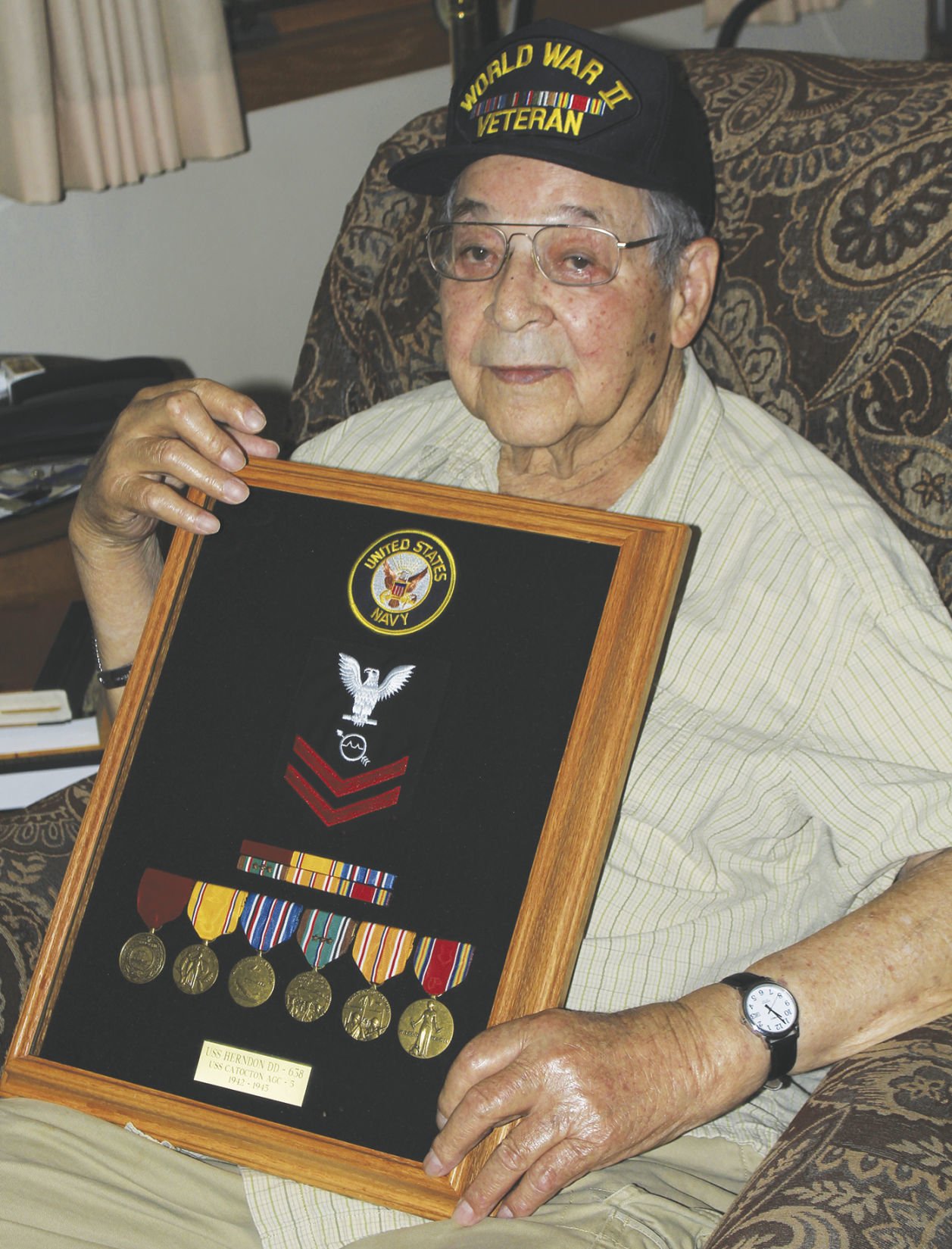 U.S. Navy veteran Walter Whitehorse shows his medals and ribbons earned during his service during World War II. He served aboard a destroyer, making several trips across the Atlantic, with specific assignments during D-Day, the invasion of southern France and the Yalta Conference. 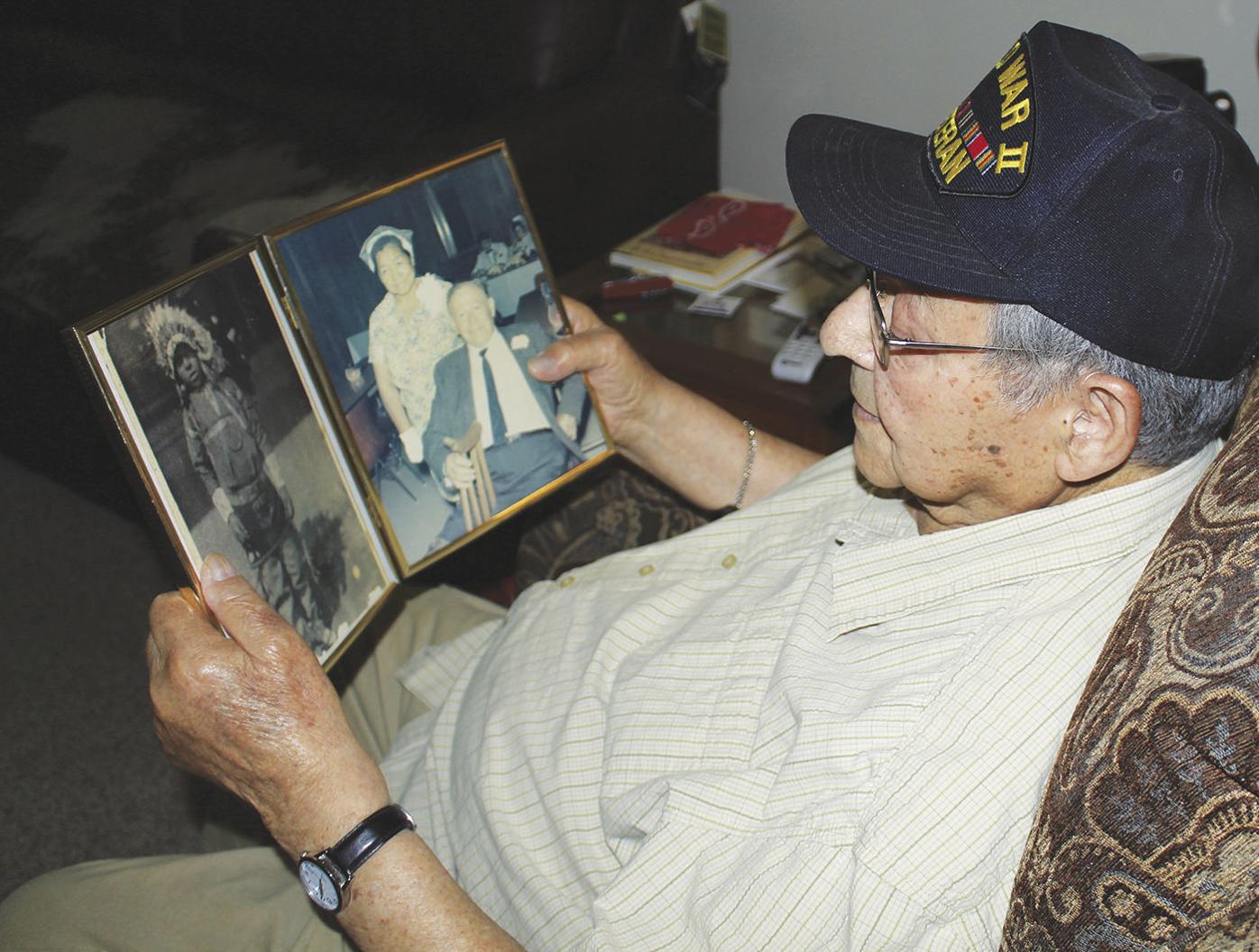 Walter Whitehorse reminisced about his younger days when he dressed for a powwow, displayed in the left photograph, and talked of his parents, Ralph and Annie Greencrow Whitehorse, on the right. He served in the U.S. Navy during World War II and today lives in McFarland.

World War II veteran Walter Whitehorse spent nearly four years in the Navy, first enlisting at age 16. He served as a radarman aboard the USS Herndon and USS Catoctin.

U.S. Navy veteran Walter Whitehorse shows his medals and ribbons earned during his service during World War II. He served aboard a destroyer, making several trips across the Atlantic, with specific assignments during D-Day, the invasion of southern France and the Yalta Conference.

Walter Whitehorse reminisced about his younger days when he dressed for a powwow, displayed in the left photograph, and talked of his parents, Ralph and Annie Greencrow Whitehorse, on the right. He served in the U.S. Navy during World War II and today lives in McFarland.

For years after the end of World War II, Walter Whitehorse teased his wife, Marie, about his “girlfriend,” Queen Elizabeth II.

In February 1945, he was stationed as a radarman on board the USS Catoctin that served as the base ship for dignitaries at the Yalta Conference that featured a meeting with President Franklin Roosevelt, Great Britain Prime Minister Winston Churchill and Soviet leader Joseph Stalin.

The British royal family was also on board.

“I give a guy $5 so I could stand his watch (outside the royals’ cabin),” Whitehorse said with a chuckle. “She (then-Princess Elizabeth) happened to step out, and I was standing right there … I looked at her and I give her a big wink. She got a little red and backed back in.”

A little small talk on occasion elicited a few responses from the future queen, born in 1926, the same as Whitehorse.

He often told his daughter, Ruthann, she could have been a princess if only …

A decision to enlist

In the late 1930s and early 1940s, Whitehorse was a teenager with a lot of time on his hands, especially in the summer.

“There was no work going on, especially with the (Ho-Chunk) tribe, there was absolutely no work,” he said. “The only work that was available around here was farm work.”

Farm work meant cutting and baling hay, and loading it up to the hayloft. It was hot and sweaty work.

“I was the low guy on the totem pole. It gets so doggone hot up there, with all those seeds flying all over and sweating bullets,” Whitehorse said. “I thought to myself one day, ‘Boy, I am not going to do this all my life.”

He was sent to boot camp in Virginia, and continued his schooling there, eventually settling on classes to become a radarman.

Assigned to the USS Herndon, a destroyer, he shipped out in January 1943. The ship carried a little more than 300 men, with half a dozen or so handling radar duties.

“You couldn’t stay on that radar for any better than an hour, because at that time, they were so bright, you couldn’t look at them hardly,” he said.

The destroyer served as an escort to ships full of men and equipment traversing the Atlantic, from the U.S. to various ports in Europe.

“Our main job was as fast convoys,” Whitehorse said. “We would escort them across the Atlantic to Britain. In two weeks’ time, we could make a turnaround, complete from being in Europe, back to the States, pick up another batch and take a bunch of broken equipment back.”

That first year was busy for him.

“1943 was the biggest year for the German submarine fleet,” he said. “They were sinking ships left and right. We couldn’t do much about it. But, about the end of that year, it was the other way around. We were sinking subs like, you get to the point where you start feeling sorry for those guys.”

Still not quite 18, he was among the youngest on his ship.

“When I hit my bunk, I always prayed that we wouldn’t get sunk at night,” he said. “I don’t know what I would do after I got in the water.”

The USS Herndon once served as the convoy for the Queen Mary as it embarked from New York with several thousand troops on board.

“The first day we were way ahead of the ship, and we’re doing a little zigzagging,” Whitehorse recalled. “By late afternoon, we weren’t doing any more zigzagging, because we weren’t really much faster than that ship behind us. That evening, it was still behind us, but we were straining trying to keep up. The next morning, we got up, and it was gone. That ship was really fast.”

The ship also provided support during D-Day and the invasion of southern France.

On leave in Italy, Whitehorse discovered the value of cigarettes.

At 50 cents a carton, he was allotted a couple cartons each week, but as he did not smoke, he gave then to friends. When he realized their value, he started buying them cheap when he could and later sold them for a profit to other servicemen and residents of the area.

The profits allowed him and a friend to buy a horse, which they had for a few days before Whitehorse gave it to a young family. Later, he bought a taxi, drove it until it died and sank it in the Tiber River.

“We had money that wouldn’t quit,” he said.

A part of history

In 1944, Whitehorse was transferred to the USS Catoctin, which would serve as the communications hub for the Yalta Conference.

“It looked like a regular passenger ship,” he said. “It was kind of a luxury ship.”

The many cabins on board served the dignitaries who were going to embark to meet Stalin, who refused to leave land.

“Roosevelt looked kind of sick at that time,” Whitehorse said.

The president was too weak to go up and down the gangplank, so he was placed in a cargo net, hoisted aboard and then set into his wheelchair.

Whitehorse said that at the time, it never occurred to him the event would hold such significance.

“I didn’t even know we were making history for that matter,” he said.

The war in Europe ended in May 1945 and in the Pacific a few months later.

“We could see that coming,” Whitehorse said. “I was in the communications part of that ship, and they always had a lot of stuff that was going on that we knew about but the rest of the crew wouldn’t know.”

Whitehorse, who had earned enough points for an honorable discharge, considered singing up for another six years.

Back on base, the 19-year-old bounded down several flights of steps to get his paperwork.

“I went whistling by this one guy, and he yelled at me, ‘Sailor, don’t’ you salute officers?’” he said.

Whitehorse turned around, saluted the officer and was told to get a haircut and return to the officer. He did so, and when the officer told him to go and get another haircut, Whitehorse got physical with him. He realized his Navy career was over.

“I thought to myself, ‘Holy smokes, now what am I going to do?’” he said about the fight.

Whitehorse quickly grabbed his paperwork and his other belongings and caught a bus to Great Lakes, Illinois, and prepared to go home.

He has no regrets about his nearly four years in the Navy.

“I loved the military,” Whitehorse said. “I had two pair of dress shoes, I had one or two pair of work shoes, I had five sets of underwear, three sets of long john underwear – stuff I never had before. I had a pea coat, other coats, with a lot of other gear. I had a pile of stuff. More than I ever had.”

He met his future wife, Marie Stoffel, in Illinois. Returning to the Madison area, he studied auto mechanics at Madison Area Technical College. He and Marie owned and operated Chief Auto Parts for several decades.

Today, he lives in McFarland.