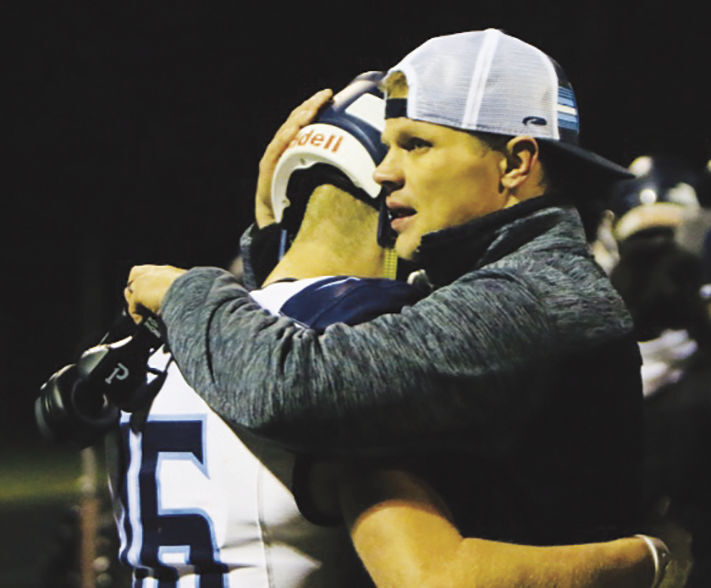 Gaining the trust of players is the key to getting the most out of them on the playing field, according to Brian Hawn, right, the offensive line coach for the McFarland High School football team. Hawn embraces one of his players following a McFarland home game. 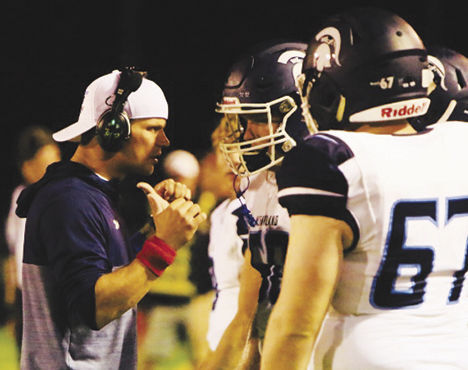 McFarland High School football team offensive lineman coach Brian Hawn, left, first joined the staff in 2016 after growing up in Butternut, Wisconsin, playing semi-pro football and making coaching stops at Eau Claire North and Madison Memorial High School. Here, he provides instruction to one of his players during a game.

Gaining the trust of players is the key to getting the most out of them on the playing field, according to Brian Hawn, right, the offensive line coach for the McFarland High School football team. Hawn embraces one of his players following a McFarland home game.

McFarland High School football team offensive lineman coach Brian Hawn, left, first joined the staff in 2016 after growing up in Butternut, Wisconsin, playing semi-pro football and making coaching stops at Eau Claire North and Madison Memorial High School. Here, he provides instruction to one of his players during a game.

When it comes to Butternut, Wisconsin, Brian Hawn is an expert.

After he was born in Elgin, Illinois, Hawn’s family moved to Butternut, which has a population of 416, located in the north-central part of Wisconsin, about an hour south of the Lake Superior shoreline. Butternut is not the garden spot of the universe, but Hawn said growing up there was awesome.

“I have four brothers and one sister and we grew up on a farm, so adventure and mischief were abundant,” he said.

Hawn joined the McFarland High School staff in 2016 as offensive line coach. The Spartans finished the 2018 regular season undefeated before losing in its Level 1 playoff game to Pewaukee.

In 2019, McFarland returned to the playoffs after a 6-3 mark, but unfortunately lost in the first round to eventual Division 3 champion, DeForest.

Better things are bound to happen for the Spartans, who didn’t play in 2020 due to the COVID pandemic.

If anything, Hawn believes in the learned coaches that he works with during the season and their ability to get the most out of the players.

“The amount of football intelligence on this staff blows me away,” Hawn said. “We have two guys on staff that have coached college football (Pete Williquette and Brian Hellenbrand). We have three guys that have played high-level college ball (Doug Peterson, Ryan Rothwell, Tyler Wedel). (Head coach Paul) Ackley played college ball and has been a head coach longer than I’ve been an assistant. Game planning with these guys is incredible. It’s unbelievable to watch how fluently they speak the language of football and their vast knowledge. I’m really, really lucky to be here.”

Hawn admits he wasn’t much of an athlete at Butternut High School. It was too small to support a football team, but Hawn played baseball and basketball, and ran on the cross-country team.

“I wasn’t very good at any of them, but I was always competitive and loved the team environment,” he said.

“He was very supportive, encouraging and patient. He’s a big reason why I got into coaching,” Hawn said. “I wanted to be like him.”

After graduating from Butternut in 2004, Hawn enrolled at Wisconsin Indianhead Technical College in Rice Lake and earned a degree in automotive maintenance. After that, he took classes at Chippewa Valley Technical College to pursue a marketing degree.

Hawn then joined a semi-pro football team called the Eau Claire Crush of the Northern Elite Football League as an outside linebacker, and was encouraged to take up coaching when the roster had too much depth at that position.

Hawn’s next stop was defensive line coach at Eau Claire North High School in fall 2013 and he stayed there for two seasons before he and his wife moved to the Madison area. Once settled in, he signed up to play outside linebacker with another semi-pro team in Madison. Once again, his coaches convinced him to give up his roster spot and become a coach.

Hawn served as assistant coach at Madison Memorial High School for the fall 2015 season before finally getting his opportunity to coach the offensive line in McFarland.

“I had been in contact with Paul Ackley about coaching in McFarland as I had worked with the youth program a bit previously,” Hawn said. “My son is now in high school at McFarland, and the chance to coach him in football throughout his high school years was too great to pass up.”

While Hawn enjoys the strategy of planning for a football game, he said the relationships built through football have provided him with the greatest rewards.

“Don’t get me wrong, I love the scheme and the competitive, violent nature of the game, but the relationships formed around that field last a lifetime,” he said. “I’m still friends with guys from that very first team I played on.”

While getting the most out of football players is no easy task for a coach, Hawn said earning the trust of his athletes often leads to better on-field performances.

“Find out what they like, what their hobbies are, what common ground you may have. Let them know time and time again how much you care for them,” Hawn said. “You can’t truly push an athlete to greatness until they trust you, and that trust is built through a lifelong bond.

“I was told very early in my career, by a coach that I trust ‘Praise publicly. Criticize privately.’ That simple phrase has been the foundation of how I want to coach players.”

Hawn credits his family with giving him the opportunity to be a football coach. He’s been married to his wife Amanda for eight years, his son Damian is a 16-year-old junior at McFarland and his 7-year-old daughter Gabriella is a first grader. He looks forward to his future as a coach and family man in McFarland.

“I get to coach my boy in high school sports,” Hawn said excitedly. “My wife is also a junior high girls’ basketball coach for the rec program here in town, so I get to watch her coach our daughter soon.”