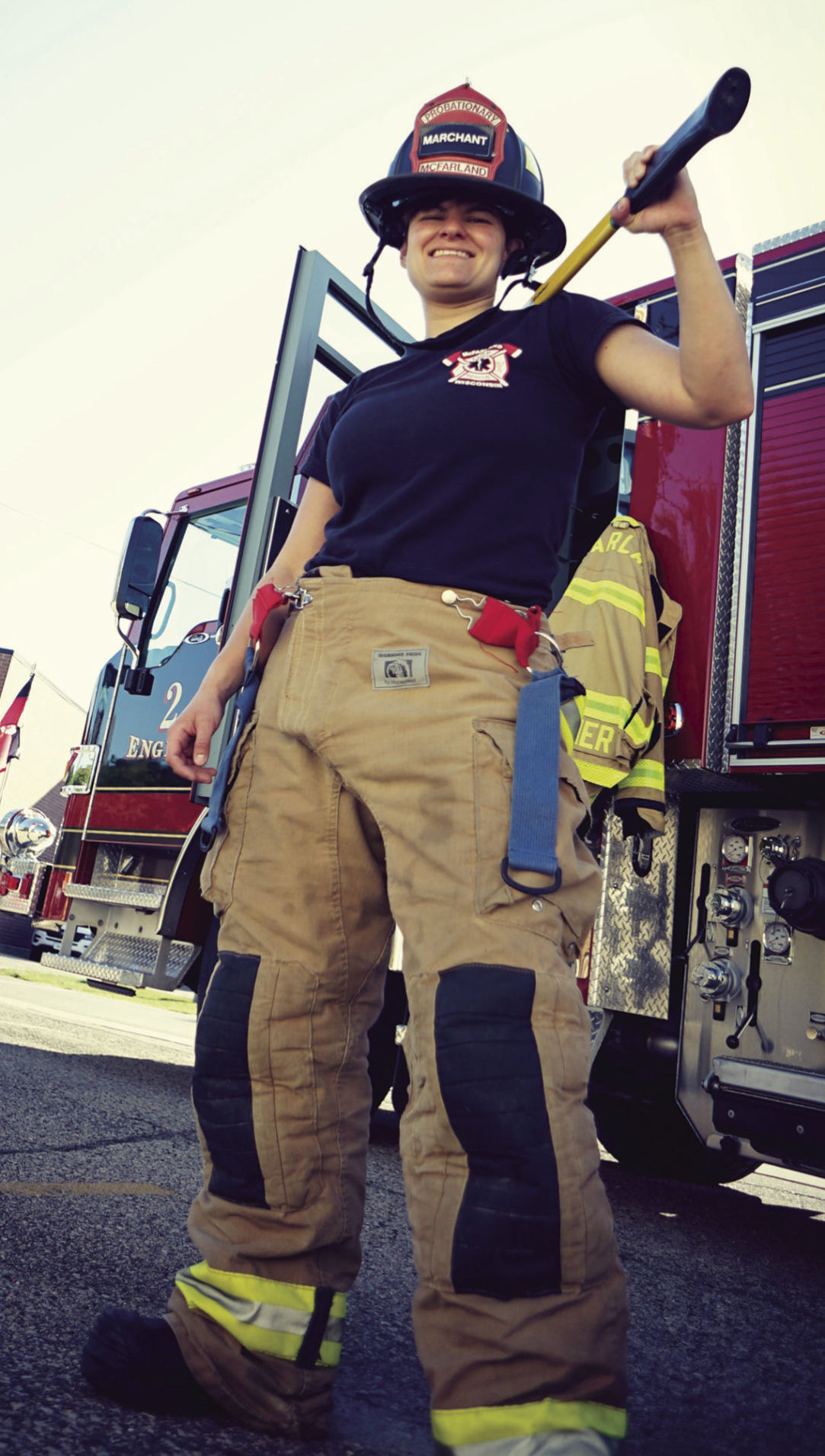 McFarland Fire and Rescue volunteer firefighter Katharina Marchant is an art teacher for the Fort Atkinson School District. At 5 feet tall, Marchant has found her size to be an advantage.

Captain Harlan Hettrick, left, explains how firefighters use the jaws of life to rescue people from cars to Olivia Soto, center and Sonia Bedker as their kindergarten class tours the fire station during Fire Prevention Week. He has been volunteering with McFarland Fire and Rescue for more than 25 years.

McFarland Fire and Rescue volunteer firefighter Katharina Marchant is an art teacher for the Fort Atkinson School District. At 5 feet tall, Marchant has found her size to be an advantage.

Captain Harlan Hettrick, left, explains how firefighters use the jaws of life to rescue people from cars to Olivia Soto, center and Sonia Bedker as their kindergarten class tours the fire station during Fire Prevention Week. He has been volunteering with McFarland Fire and Rescue for more than 25 years.

McFarland Fire and Rescue is looking for volunteers to answer the call, or rather fire alarm.

McFarland Fire and Rescue will host an informational open house from 6-8 p.m. Sunday, Nov. 3, to answer questions about becoming a volunteer firefighter or emergency medical technician. The department is providing food and refreshments.

“We have lost about 30 percent of the volunteers in the last decade – that has taken that many firefighters that have been available for answering the call across the nation,” McFarland Fire and Rescue Chief Chris Dennis said about the national volunteer firefighter shortage.

McFarland Fire and Rescue has 35 firefighter volunteers, down from the department’s usual 42 volunteers. Another 20 individuals serve as EMTs.

As McFarland’s population increases, the number of calls is increasing and the department is responsible for responding to more types of incidents. Fires now make up the smallest number of calls, most of which are alarm and medical calls.

“There’s so much we’re doing in our response than just fires,” Capt. Harlan Hettrick said.

The 25-year veteran of McFarland Fire and Rescue explained that the department performs fire safety inspections and public education.

“We want to be here, too, when the emergency comes, but as a whole, we want to be on the side of fire safety,” he said.

“A lot of the people who think they’re not cut out for it, in reality, probably can be,” Dennis added.

Advances in technology have removed much of the physical aspect, and the department provides training and equipment.

At 5 feet tall, Katharina Marchant thought there was no way she could be a firefighter.

The Fort Atkinson art teacher used to bring her children to the Discovery Garden playground at the E.D. Locke Public Library, across the street from the station.

“I’d be sitting there with my kids, and we’d watch the ambulance and the fire trucks and it was really neat,” she said.

However, she thought her petite stature and need to care for her children, including a baby, would prevent her from volunteering.

Her husband encouraged her to join after they received a mailer at their house in November, and she began earlier this year.

She found that her size actually works to her advantage. If there is a fire in an attic, she can easily climb in to extinguish the fire.

“It’s really rolled into this amazing experience that I wish more women would have,” she said.

The predominantly male department hopes to add more women to its roster.

“They’re very capable and often, I have found, can be a better individual for the type of work,” Dennis said. “It’s something that the stereotypes that have been here in years past are disappearing, and it’s good to see them disappear. “

Each volunteer responds to an average of two to three calls per week, totaling four to six hours.

Although they are called volunteers, it is a paid on-call position.

New recruits begin at of $7.25 per hour for training and calls. As individuals receive more training and certifications, they receive greater compensation.

To be a volunteer, individuals must be at least 18 years of age, have a good driving record and be able to lift 50 pounds. Volunteers must also pass the certification test.

“We can develop with all education levels within different fits into the department,” Dennis said.

“We’ve got quite a mix of people,” Hettrick said.

He added the varying backgrounds of volunteers, from professions to education to life experiences, transition well into firefighting.

“It’s been one of the big parts of wanting to belong to something like this, because it is not all one voice,” he said. “There are many voices in the organization.”

As a new volunteer, firefighters attend a 66-hour entry level firefighter course through Madison Area Technical College (MATC). They then take the firefighter one course and obtain state certification. Both courses are one night per week each semester.

Volunteer firefighter Michael Guenther joined the department in January 2018 while looking for a career change.

“When I joined, I didn’t have any experience whatsoever,” he said.

He completed MATC courses with McFarland and is now studying to become an EMT.

Guenther also said he likes the fact that the department is family-based.

“We always encourage families to come and help,” Guenther said.

The department hosts a pancake breakfast and has opportunities for family involvement.

“The fire and rescue department is truly a family,” Dennis said.

He hopes to add more members by opening its doors.