Sarah Kopp charges the net to return a volley in her win at No. 3 doubles. 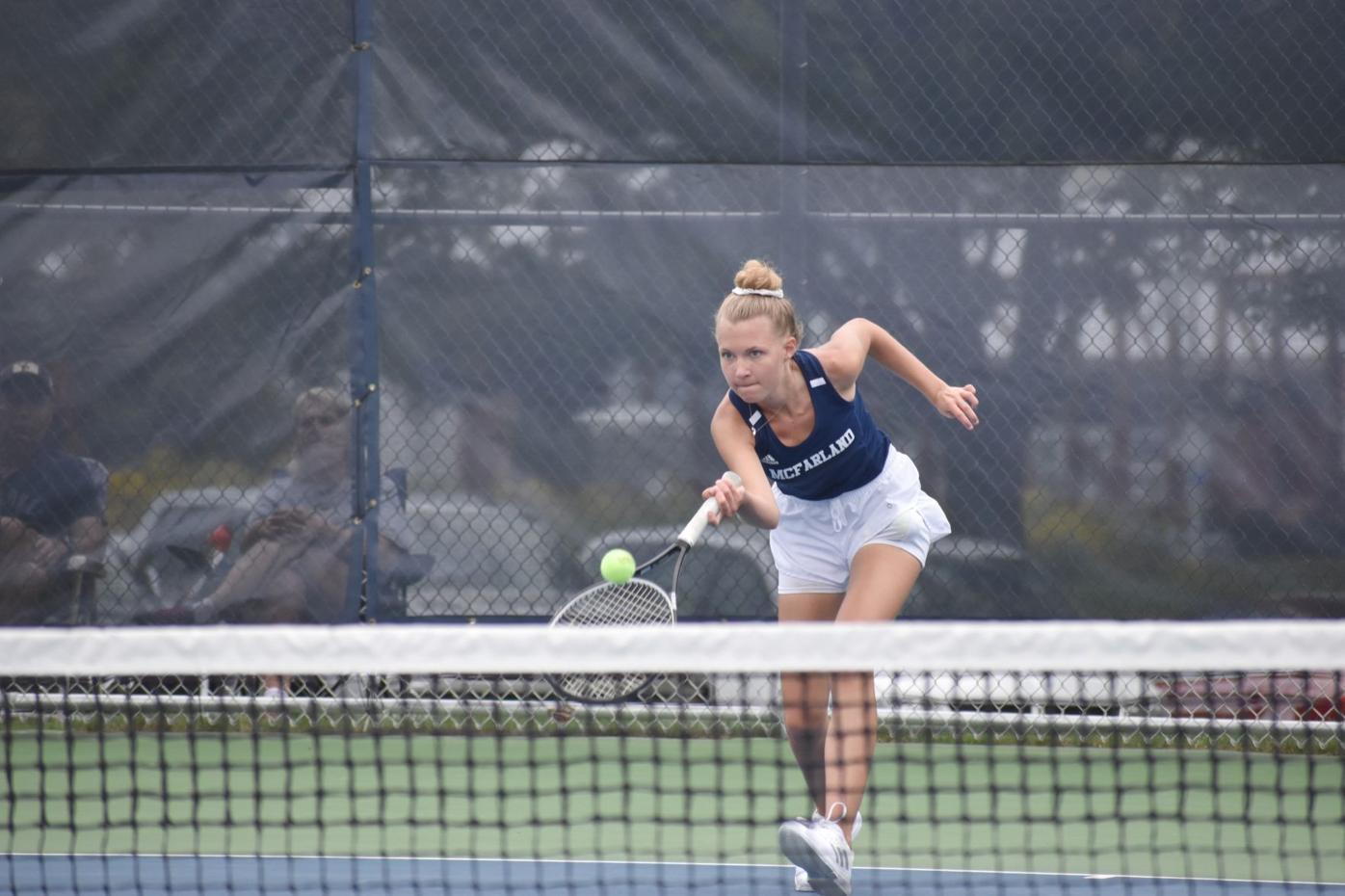 Sarah Kopp charges the net to return a volley. Kopp won both matches at No. 3 singles this week.

At No. 1 doubles, the Spartans faced the closest match, with Sadie Bartzen and Lexi Kohn pulling out a (7-5, 3-6, 10-8) victory over Ashley Ulset and Sylvia Fox.

Linnea Sandine and Sadie Witt defeated Julia Doll and Juliet Aleson for No. 2 doubles(6-1, 6-0). Emily Roe and Bailee Judd completed the sweep at the No. 3 doubles spot, winning (6-0, 6-0) over Alyssa Kosmicki and Larissa Ayers.

Sarah Kopp charges the net to return a volley. Kopp won both matches at No. 3 singles this week.

After battling a week of August temperatures, the Spartans enjoyed the cooler weather with a 6-1 victory over Lodi on Tuesday, Aug. 31.

“We’re off to a good, strong start, and I’m very happy with the girls,” said McFarland coach Tod Lacey. “They’ve got great attitudes and everybody has been on board with fighting through this heat, and that’s really been impressive.”

McFarland earned three singles victories, including a (7-6, 6-1) victory from Laura Maudlin at No. 1 singles over Allison Larsen.

“She has high expectations, she obviously wants to do very well, and it’s just getting yourself settled in now and playing,” said Lacey of Maudlin, who is recovering from an ankle injury. “Last night (Aug. 30), she played a really smart match, and really took her opponent apart, especially in that first set, so we’re working on keeping her steady and doing what she can do.”

“Sarah’s got a heck of a forehand and when she keeps that ball in play, she’s a really tough opponent, and Kylie is as steady as you can be. She’s a perfect number four player, gets it back and forth, and just waits for the other girl to make a mistake,” said Lacey.

“Anita has incredibly quick feet, she’s a good runner and good athlete. She’s just really great at running the ball down, getting it back and making that girl hit one more ball,” said Lacey.

In doubles, the Spartans won all three slots. At No. 1, Sadie Bartzen and Lexi Kohn defeated (7-5, 6-1) Rylee Schneider and Mira Potter.

Linnea Sandine and Sadie Witt won a tough (6-4, 1-6, 10-5) match against Lexy Karls and Ava Glaser at No. 2 doubles. Emily Roe and Bailee Judd completed the sweep for McFarland at No. 3 doubles (6-0, 6-1) against Emma Steinberg and Audrey Jesse.