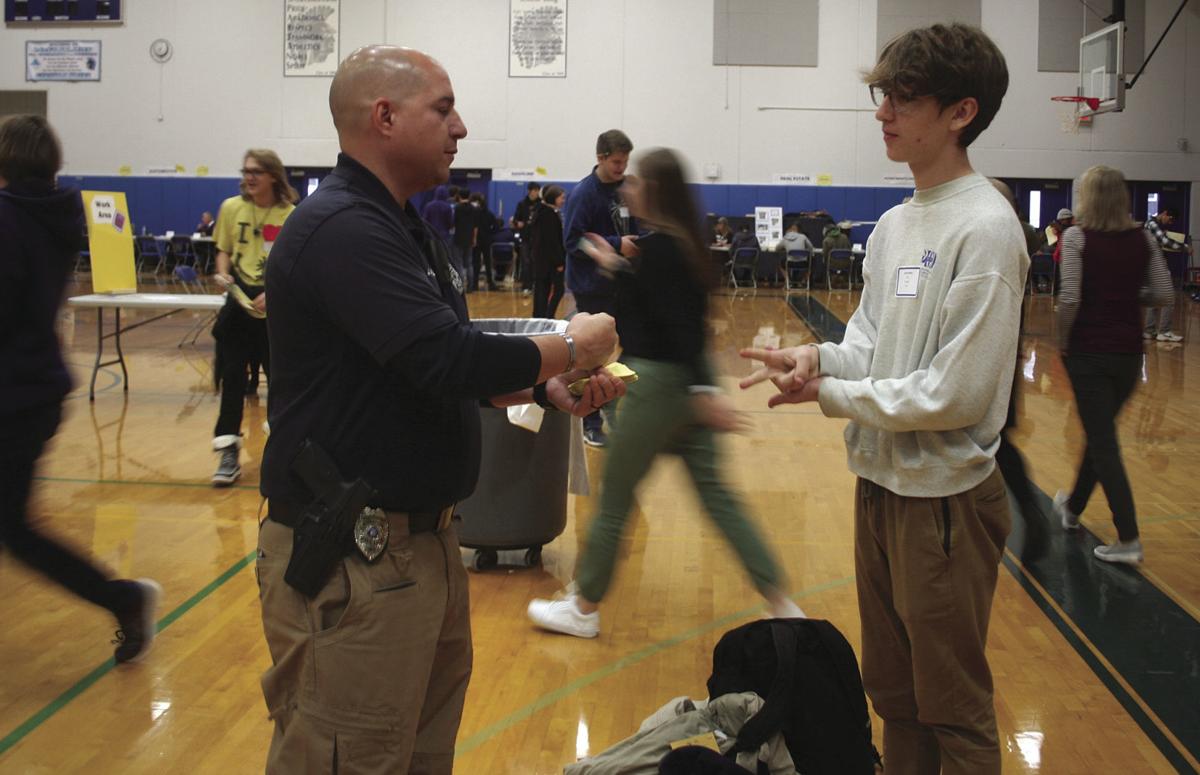 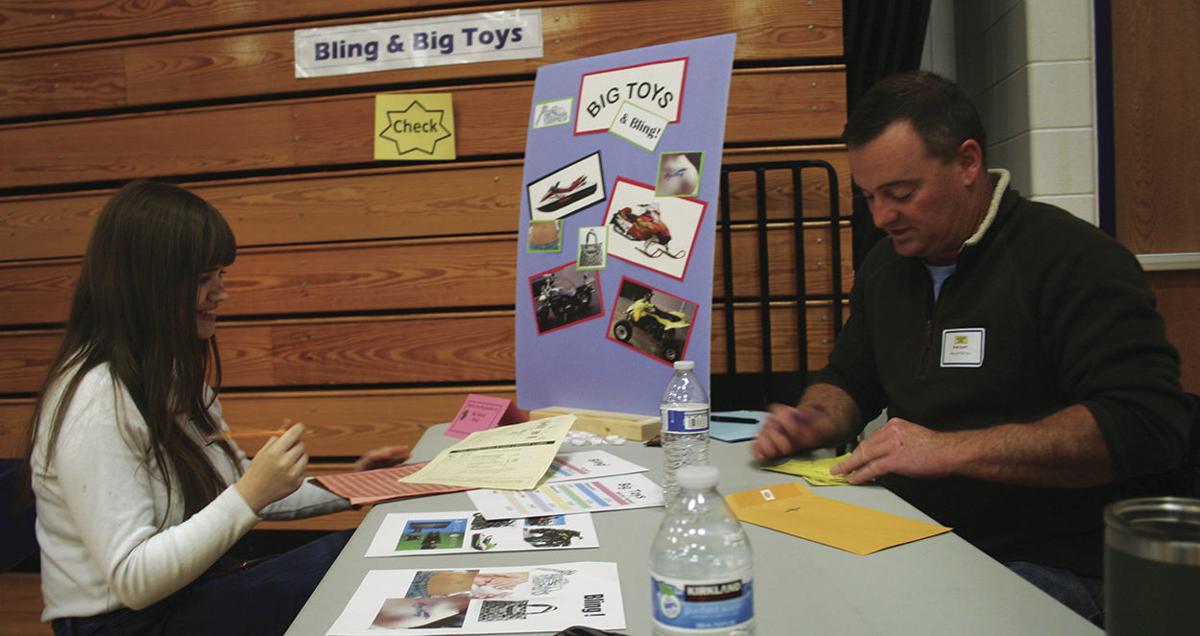 Kylee Johnson, left, returns an item to Matt Kuehl at the “Bling and Big Toys” booth. Students had to pay necessary expenses but also had to option to buy some extras. The booth offered ATV’s, jet skis, tattoos, designer purses and other unnecessary, but fun items for an additional cost. 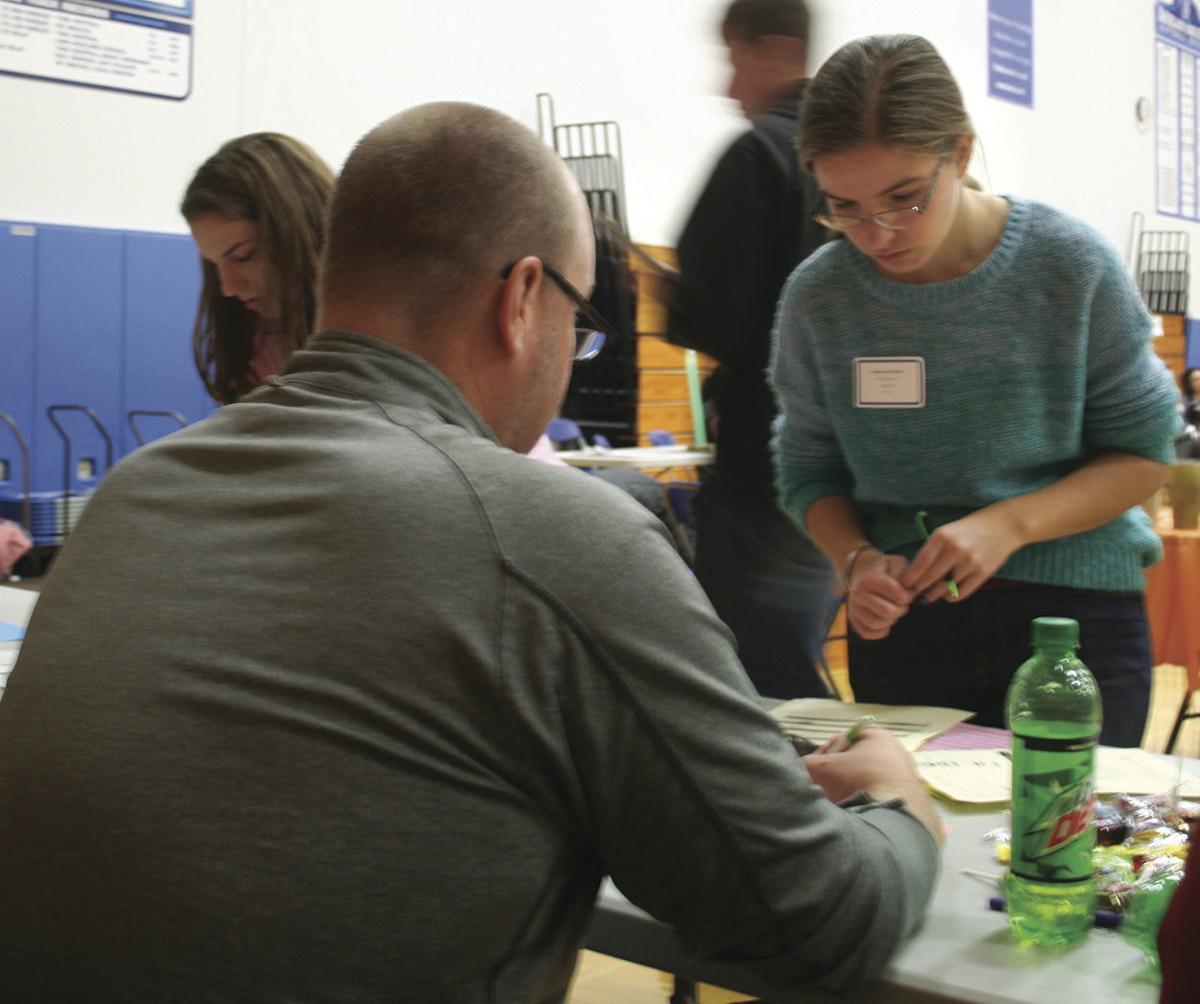 Alexandria Wise, a hypothetical civil engineer who is married with a 4-year-old son, chooses an insurance policy with the help of a volunteer agent.

Kylee Johnson, left, returns an item to Matt Kuehl at the “Bling and Big Toys” booth. Students had to pay necessary expenses but also had to option to buy some extras. The booth offered ATV’s, jet skis, tattoos, designer purses and other unnecessary, but fun items for an additional cost.

Alexandria Wise, a hypothetical civil engineer who is married with a 4-year-old son, chooses an insurance policy with the help of a volunteer agent.

McFarland High School juniors got a hard dose of reality at the annual Reality Zone event.

All 180 MHS juniors worked through a financial literacy simulation called the Reality Zone on Wednesday, Nov. 6. They visited various booths around the gym, paying accurate amounts of expenses based off realistic incomes.

This is the 14th year the school has held the event.

Students thought about themselves at 28 years old. With the help of a matching survey, they chose an occupation. Students determined if they thought they would be married at 28 and if they wanted a pet.

“Then, from there, we figure out, based on labor statistics, what would be their income,” career and technical education coordinator Penny Thompson said.

Students were also assigned a random spousal income if they choose to be married.

Before the event, students learned about the simulation process and how to keep a running balance in a check register.

Students begin the simulation with their occupation’s gross pay and figured out their net pay after taxes. They opened savings and checking accounts, chose whether they would rent or buy from current listings and paid utilities based on square footage. Students then chose their car and paid for gas.

Every student, whether they were married or not, was assigned one or two children and paid child care. If a student chose to remain single at 28, they received child support payments.

Each booth was manned by one of about 50 volunteers with expertise in that field to determine the most accurate cost for each expense.

Jim Jenson from Madison Gas and Electric manned the utilities booth to calculate what utilities would cost based on the square footage of a property.

“It’s a good opportunity for us to see how much you actually need,” said MHS junior Kay Shipley, who chose to become a police officer and be married.

“Don’t have kids,” she said with a laugh after seeing the cost of child care.

Friend and fellow junior Alexandria Wise chose to become a civil engineer to see how her real-life career interest would be reflected in the simulation.

“It shows how to prioritize to make the right choices,” she said.

Like in life, the simulation came with some unexpected – and expensive – surprises.

DECA officers Erin Eggers, Maddie Johnson and Lizzy Fortune dealt the hands of fate. Students visited their booth and randomly picked a card. Some got lucky and picked a situation that earned them money; others had to pay.

School resource officer John Miller stopped students traveling between booths and challenged them to a game of rock-paper-scissors. If Miller won, students randomly chose a card detailing a traffic violation with a ticket amount. Students had to travel back to the insurance booth as their premiums rose with the offense.

Principal Jeff Finstad said the event gives students the “first dose of reality” and the event is “one more thing that makes McFarland so special.”

“They learn financial literacy in a safe way,” he said.

Students can make mistakes in the simulation before making them in the real world.

Finstad said students in five to 10 years often look back, remembering what they learned in the Reality Zone.