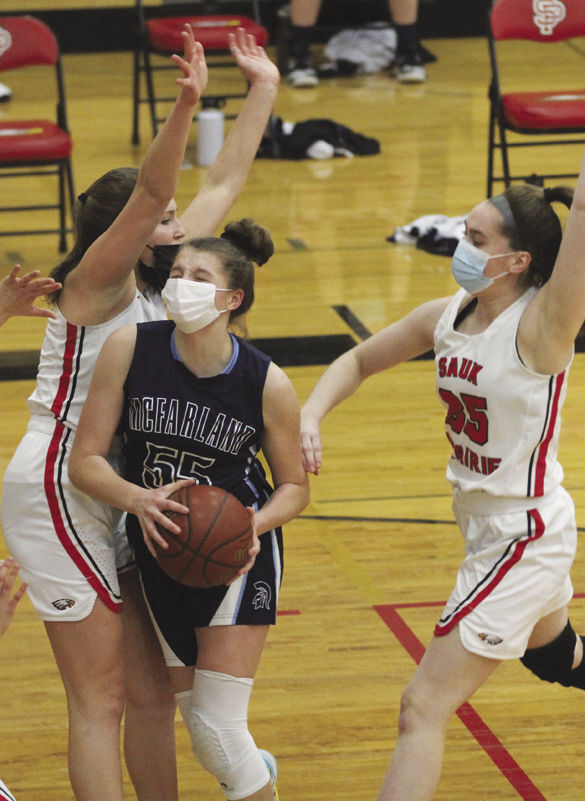 Teagan Mallegni, center, collides with a Sauk Prairie defender while being stalked by another in the McFarland High School girls’ basketball team’s 72-67 win in the WIAA Division 2 regional game Feb. 12. Mallegni led the Spartans with 28 points. 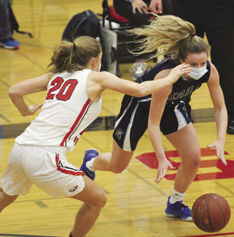 Teagan Mallegni, center, collides with a Sauk Prairie defender while being stalked by another in the McFarland High School girls’ basketball team’s 72-67 win in the WIAA Division 2 regional game Feb. 12. Mallegni led the Spartans with 28 points.

If freshman Teagan Mallegni was feeling the pressure of playing in a postseason atmosphere, it didn’t show in the McFarland High School girls’ basketball team’s first-round regional tournament game at Sauk Prairie. Mallegni scored a team-high 28 points to lead the Spartans over the Eagles 72-67.

Entering the second half, Head Coach Sara Mallegni wanted the team to move the ball and not rely so much on the young freshman.

“We came in at halftime trying to get the team to move the ball and not keep looking for (Teagan Mallegni),” she said. “Once we got the ball moving, we had a lot more openings and more movement on offense.”

The Eagles opened the second half with a 3-point shot that cut the McFarland lead to five, but a jump shot from freshman Ava Dean allowed the cushion to grow to 11 at 60-49 with 4:30 left in regulation. Sauk Prairie stayed in the game and reduced the lead to 64-59 with 1:11 remaining but efficient free-throw shooting kept the Spartans in control. Senior Lindsey Lonigro had 16 points, 13 in the first half when she sank three 3-point shots. Lonigro said Sauk Prairie was very difficult to beat.

”They are very athletic and a talented team, so we had to come together and play as a team to get the win tonight,” she said.

Coach Mallegni said Lonigro has been a steady mentor on the court throughout the shortened season.

“She brings leadership with her presence,” she said. “We are always comfortable with her on the court with the experience she brings.”

Kirch had 11 points including 7 of 8 from the free-throw line in the second half.