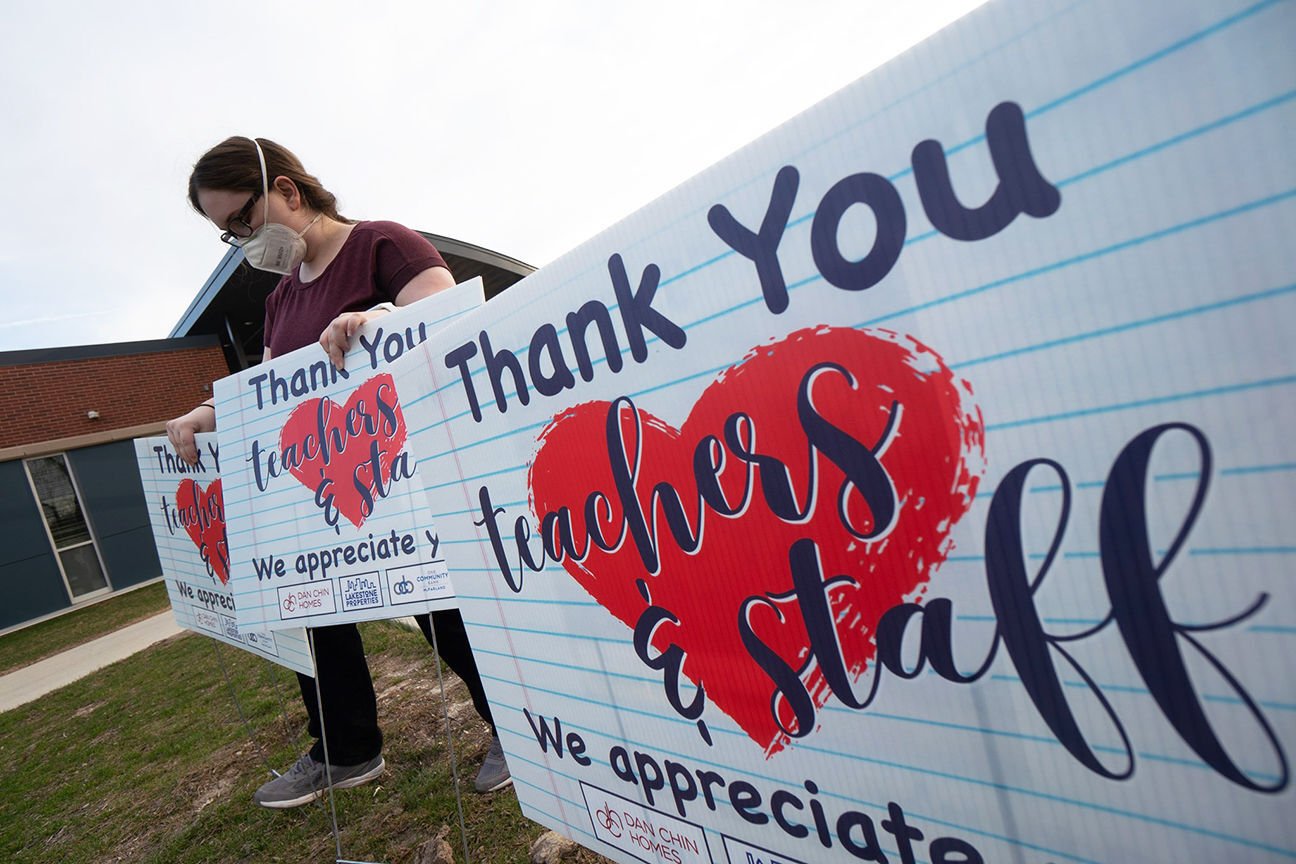 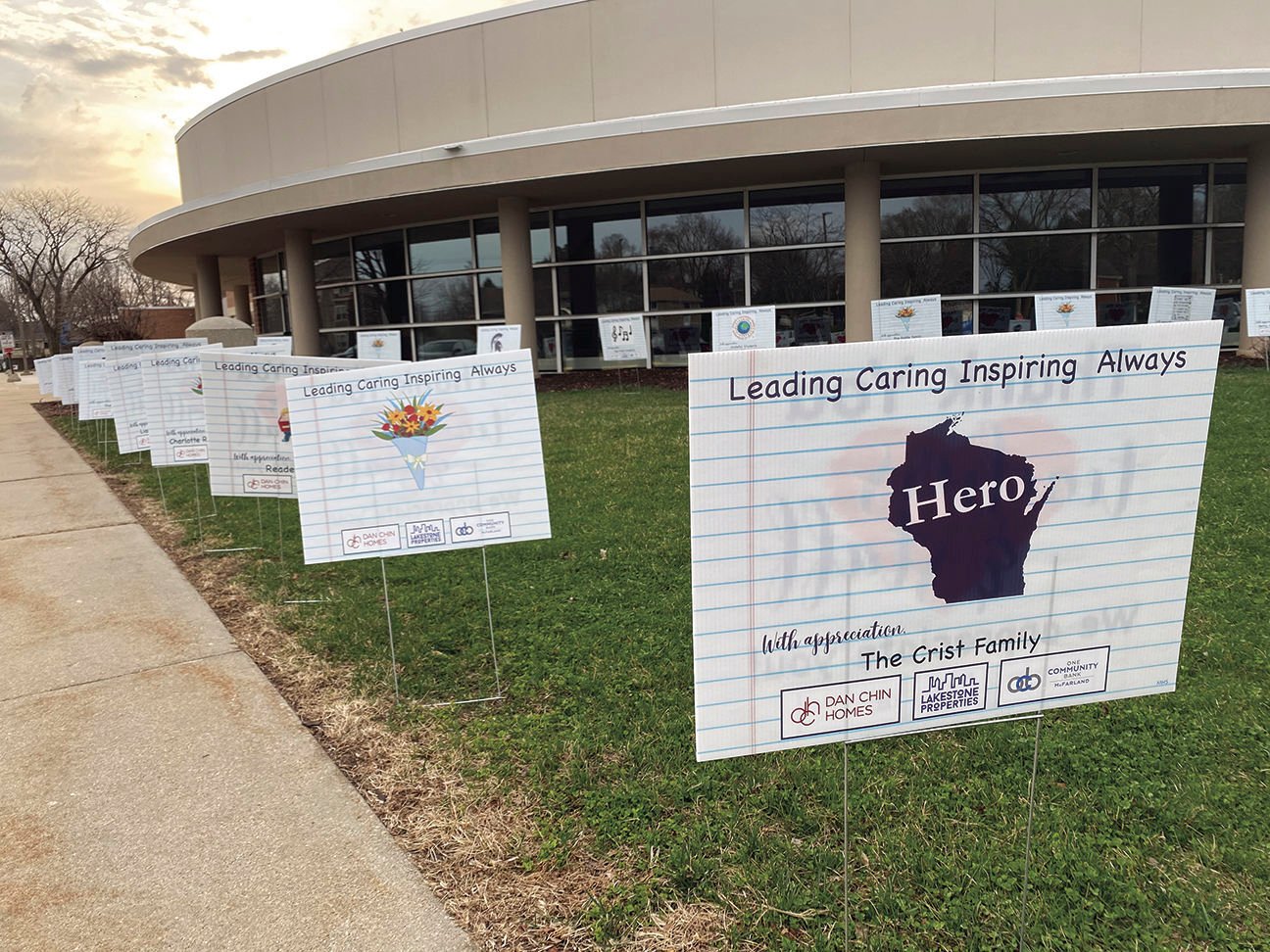 Teachers arrived at McFarland High School early Tuesday morning to find a line of thank you signs from district families.

Teachers arrived at McFarland High School early Tuesday morning to find a line of thank you signs from district families.

What started as a rough draft idea from one McFarland mother has quickly spiraled into a community-wide initiative to rally behind McFarland School District teachers.

“I noticed people in the McFarland community growing concerned about certain teachers’ actions, and seeing negative comments online from people who, I think were just frustrated with life in general, but I was concerned about how that might be affecting teacher and staff morale,” Young said.

Controversy surrounding school reopening has been widespread over the last 12 months, with several McFarland School Board meetings of six to eight hours, at which several teachers asked the board to slow the district’s reopening process amid the COVID-19 pandemic.

In February, one McFarland teacher came under scrutiny after constructing an enclosure around his desk made of plywood and plastic tarp. After multiple parent complaints, the district indicated that the teacher built the makeshift fort as a COVID-19 precaution due to anxiety after a loved one died from the virus.

The district ended up removing the enclosure from the teacher’s classroom, but photos and negative comments had already begun to swirl on social media.

“I’ve talked to a lot of parents that feel frustrated, and they feel that teachers aren’t getting the positive messages that they need,” said Young. “But I don’t want to say that I don’t think people are supportive, because actually I think this community is amazing, and time and time again we rise as a community to support each other, no matter what.”

She said her first thought was to rally a group of parents to go to the schools and pledge their support for teachers in person, but with COVID-19 still affecting the community, Young had to get creative.

“I wanted to find a way to rally around the educators and staff and really recognize the hard work they’ve been doing over this past crazy year, so I thought, ‘I would love to be able to see us go to the schools and cheer and clap in person,’ but that’s not possible,” Young said.

Eventually, she hatched a new plan. Since entering the schools and speaking with teachers face-to-face wasn’t an option, the next best thing, Young thought, would be to decorate the school lawns, allowing teachers to look out their window for a constant reminder of the community’s support for local educators.

“I envisioned being able to create a sea of thank you signs expressing our gratitude for the teachers and the staff members, and all of the folks who are affiliated and working so hard in the schools,” Young said. “I reached out to a couple fellow moms, bounced this idea off of them, and then we just decided to go for it.”

Within days, the project had sponsorships from three McFarland businesses and a long line of district families wanting to make the ‘thank you’ signs. Lakestone Properties, One Community Bank, and Dan Chin Homes all agreed to sponsor the signs.

Dan Chin Homes, who previously sponsored free coffee for teachers during the month of February at McFarland House Cafe, said any project to support McFarland teachers is one they want to get behind.

“We’ve had the honor of witnessing the way that the school teams have been flexible, adapted, worked extremely hard, and gone above and beyond to meet the varying needs of children through this challenging situation,” said Meg Chin, director of operations at Dan Chin Homes. “The way that the district proactively created such a strong foundation to move through the various different phases of the pandemic was truly remarkable. Any chance that we can get to express our gratitude, we will be there, wholeheartedly.”

Young said over 200 thank you signs were made by McFarland families for the district’s teachers. The signs will be displayed across the school lawns for the entire month of April.