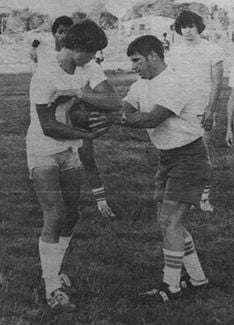 McFarland High School head football coach Bill Rice, right, demonstrates how to execute a hand-off to Dave Halverson during a practice in the 1970s. Halverson, who later went on to coach the McFarland softball team, said he learned a lot about coaching from Rice, who passed away Nov. 9. 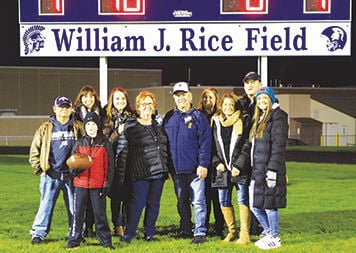 File photoFormer McFarland High School football coach Bill Rice, center with blue coat, poses with his family after the football field at Lloyd Schneider Stadium was named in his honor in 2016. Rice guided the McFarland football team for 31 years and also coached wrestling, and track and field.

McFarland High School head football coach Bill Rice, right, demonstrates how to execute a hand-off to Dave Halverson during a practice in the 1970s. Halverson, who later went on to coach the McFarland softball team, said he learned a lot about coaching from Rice, who passed away Nov. 9.

File photoFormer McFarland High School football coach Bill Rice, center with blue coat, poses with his family after the football field at Lloyd Schneider Stadium was named in his honor in 2016. Rice guided the McFarland football team for 31 years and also coached wrestling, and track and field.

Paul Ackley was a member of the junior varsity football team when he first enrolled at UW La Crosse in the early 1990s. One day, the team traveled to Whitewater for a game and Ackley noticed Bill Rice, his former head football coach at McFarland High School, and assistant John Feldner in attendance.

“I had my one and only college interception,” Ackley said with a laugh. “And I attribute it to him (Rice) being there.”

Rice, who spent 31 years as a coach and teacher at McFarland and became a positive influence on the development of high school sports in Wisconsin, died Nov. 9.

Ackley had a special connection with Rice, who cared about his players and encouraged them to always make correct decisions.

“Coach Rice was a demanding coach but in a very good way,” said Ackley, who graduated from McFarland in 1992 after playing for Rice on the Spartan football team. He took over as the Spartans’ head coach in 2005.

“He expected you to work hard and had high expectations for his program. He was a mentor, a wonderful leader and put so much time and energy into football.”

Rice came to McFarland in 1967 and remained the head football coach until 1997. He guided the Spartans to their first football postseason game in 1987, and had only eight losing seasons.

He was also an instrumental member of the Wisconsin Football Coaches Association (WFCA) and served as its president for two terms. Rice also began an annual football clinic in Madison that offered guidance and instruction to Wisconsin high school coaches. The three-day event gained such a reputation that it started attracting nationally known football celebrities such as Urban Meyer, who guided the Ohio State University football team to a national championship in 2014.

Rice also was instrumental in expanding the high school football playoff system in Wisconsin so more teams had the opportunity to compete for a state title.

Ackley’s brother James also played football for Rice at McFarland and was part of that 1987 squad that reached the playoffs for the first time. The Spartans lost to Platteville 21-9. Ackley said he and James learned valuable lessons about football and life under the guidance of Coach Rice.

“What my brother and I recalled playing for coach Rice was you knew what was expected of you, he cared about you as a person, he always instilled in you that you need to do what’s right whether it’s in the classroom, in the cafeteria or in the community,” Ackley said. “You knew you needed to do things right.”

He added that graduation from high school didn’t mean your relationship with Rice came to an end.

“You could call him up, you could stop by the school and visit with him,” Ackley said. “He always took time to visit with his players and maintained a connection.”

Ackley’s father Lee spent 27 years as an assistant football coach at Madison East High School under Wayne “Knobby” Kelleher before taking over as head coach of the Purgolders for three years starting in 1997. Lee Ackley and Bill Rice had a long friendship that helped develop the football aspirations of Paul Ackley.

“There was always that connection of the Ackley family and the Rice family,” he said. “I had two great men and two great football coaches to learn from.”

In 2017, the football field at McFarland’s Lloyd Schneider Stadium was named in Rice’s honor after a game against Beloit Turner. Rice’s wife and children were present for the ceremony including Scott Rice, who took over as the Spartans’ head coach in 1998 and Pat Rice, now the head football coach at Waunakee.

Pat Rice said the outpouring has been incredible since his mother posted an obituary about her husband’s passing on Facebook.

“He was more than just a football coach,” he said. “He was a great dad, a great grandfather, a great teacher and a great man. It is hard to articulate what he meant to me. Obviously the profession he chose led us, his kids, to love sports. He taught us so much.

“What I remember most is how he put the players first. He cared about the well-being of his players, the same with his students as a teacher,” Pat Rice added. “He built great relationships with kids, even those not in football. The lessons he taught us will live on with all of us. I feel so lucky to have learned from him.”

The road from Ithaca

Rice graduated from Ithaca High School in 1958 and earned his Bachelor of Science degree from UW-Platteville in 1962. He began his teaching and coaching career at Royall and Mineral Point high schools before landing in McFarland in 1967. For 31 years, Rice spent his days in the classroom teaching social studies and his Friday nights coaching the Spartans’ football team. His teams never won a state title but McFarland had six wins or better in 10 seasons.

The Spartans reached the postseason in each of Rice’s final four years at the helm (1994-97) including two 1996 playoffs wins over Belleville/New Glarus and Waunakee. During that span, the Spartans were 32-10.

“I learned more on that team and from that man than in any classroom,” said Halverson, who later became the head coach of the McFarland softball team. “When I got into coaching, I found out that you don’t do it for the money but for how you mold young people to become better people and he was the best.”

Ray Kirch also played for Rice in 1970s before joining the football team at UW-Eau Claire. He is now retired after coaching high school football in Wisconsin and Minnesota. He served a short stint as McFarland’s athletic director.

“You could tell from looking at his four sons that he was a solid father. Each one of them turned out to be great young men. Bill and Becky raised them right and I’m sure they were very proud of Pat, Todd, Scott and Jeff,” Kirch said. “Bill influenced generations of young men, now grown and dads and grandpas in their own right. His influence on hundreds of men like me is incalculable.”