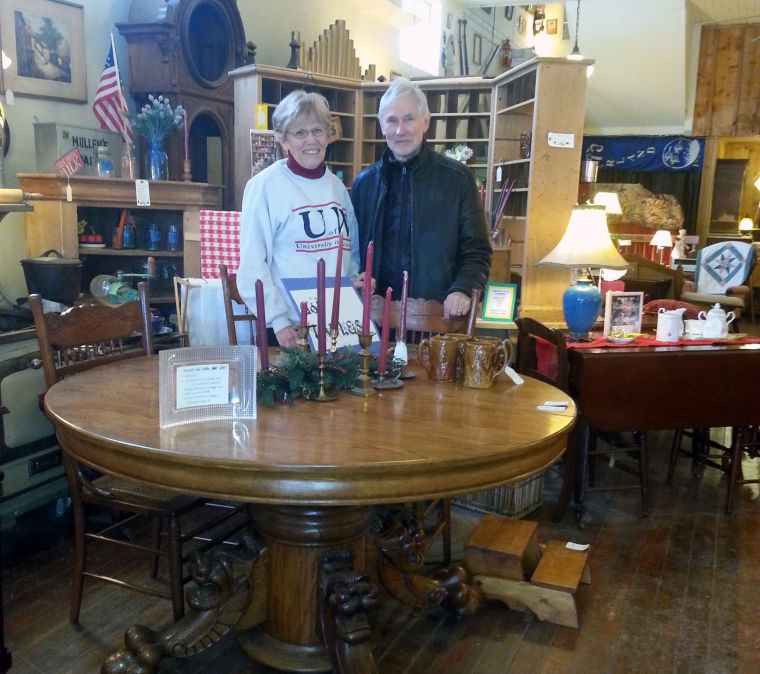 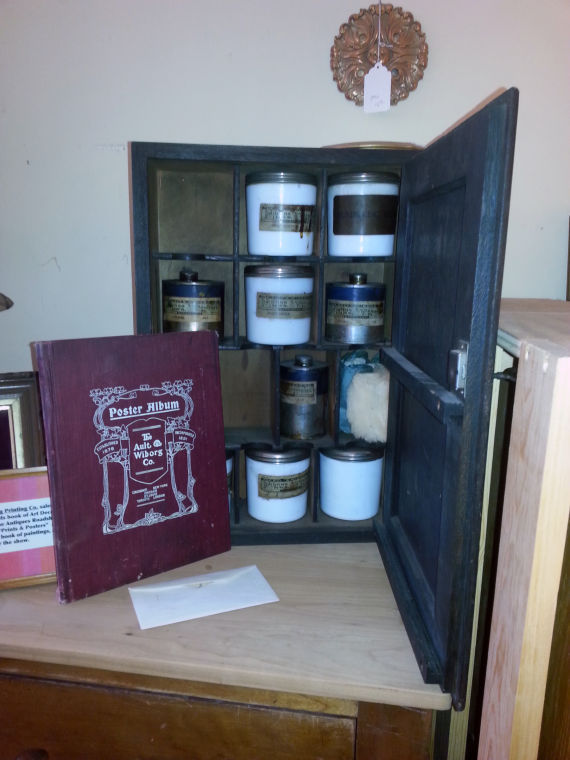 Stepping into McFarland antiques is like walking into a time machine and journeying to a place that, to some, may seem long forgotten.

The store boasts a unique inventory of items and conjures up memories of a time when life wasn’t so complicated. A time when quality came before quantity, and items were built to last. When homes were filled with artfully carved furniture that was passed down from generation to generation.

“For many people it brings back memories of parents, grandparents or other relatives. Others have an interest in history in general,” said owner Phil Olson.

“Customers get a warm feeling like ‘remember when grandma had one of those’. That’s part of the experience,” added his wife Mary Jo, who helps run the store.

The Olson’s shop, at 5910 Main St., is a massive two-story building. Inside is a vast array of antiques, collectibles and pieces for resale varying from an organ, chairs, tables, dishware, dressers, bed sets, lamps, cabinets and assorted knick-knacks.

Shopping there is about more than making a purchase - it’s a search for sentiments of the past . A nostalgic field trip down memory lane.

“Sometimes people will spend hours in the store just looking around,” Phil said.

A love for antiques

In the 1960s Phil served in the U.S. Army for three years. Inspired by items he saw when while stationed in Germany, he came home and started collecting.

“Over there all you see is antiques,” he said.

He graduated from the University of Wisconsin- Madison in 1970, became employed at UW Hospital and his collection took off. He began accumulating a wide variety of items. He even began collecting homes.

Throughout the years he purchased and refurbished six historic homes around southern Wisconsin.

“That’s how my interest in furniture grew,” he said.

With each home, his assortment expanded. He began selling his antiques by holding garage sales, but before long he needed a storefront for his sprawling collection.

In 1990, Phil purchased the historic building in downtown McFarland. The history of the building, which was built in 1897, was part of the reason he was attracted to it.

Phil and Mary Jo have traveled the country going to estate sales, antique stores and garage sales, searching for diamonds in the rough.

“Phil just has an eye for this stuff,” Mary Jo said. “I’ll see something and look past it, and he will say it’s a must have.”

Phil often picks up items in his white Sprinter van similar to the one used by Mike Wolfe and Frank Fritz, stars of the History Channel’s “American Pickers.”

“And he never forgets an item, the price he got it for or where he got it from,” Mary Jo said.

Phil’s favorite items are old chairs - all kinds. He has amassed hundreds of them. The second story and basement are filled with them and he’s always searching for others to make sets.

Over the years the Olsons have completely filled the store with uncommon items, such as a unique sorting desk from the Janesville Post Office built circa 1903.

One of Phil’s items - a cabinet from The Ault & Wiborg Co. containing printers ink samples from 1878 and a poster album from 1902 - landed him on the “Antiques Roadshow” on PBS in 2011.

“I showed it to Niko (from The Antiques Roadshow) and he knew exactly what it was,” Phil said. “He thought the cabinet was worth $750-$1,000 and the poster album was worth twice as much.”

Besides the storefront downtown, McFarland Antiques has two booths inside the Antiques Mall of Madison, at 4748 Cottage Grove Road in Madison.

That’s where some of the “prized” items go, because the mall is open everyday and for longer hours.

Thanks in part to popular TV shows, shopping resale has made a come back in recent years, Phil said. He believes the demand for antiques will continue to increase as the economy recovers.

But that’s not the only reason vintage items are in demand. Some customers want quality, not the run-of-the-mill things found in large retailers, Phil said.

“Some people think it’s a better deal than buying something new because antique items are built to last,” said Phil. “You can buy junk and pay the same price you pay for a quality piece of antique furniture … the new stuff is cardboard, not even real wood.”

Mary Jo said more customers are also coming in looking for decades-old items to repaint or repurpose. Last summer, the Olsons had a chair sale where they promoted the idea of painting them for garden decorations and other things. The two are planning another one for this summer.

“There is an increased interest in painting old furniture, with chalk paints and stuff. A lot of people are doing that,” Mary Jo said.

Over the years, Phil has accumulated many fixer-uppers, like broken furniture, that he can repair or refurbish and sell.

On any given day Phil can be found working in the shop area just off of the showroom while Mary Jo is busy decorating the store and setting up window displays.

“But I always have my eye out. Now I just pick up one or two items at a time,” Phil said. “I still go to a lot of garage sales. You never know what you might find.”

The store has hours from Wednesday through Saturday from 1 – 5 p.m. or by appointment by calling (608)-438-7510. The Olsons encourage customers to give them a call first during the winter.

1. Buy what you really love

2. Buy the best you can afford – best design, quality and condition of any item

3. Start your own antique collection, don’t depend on family heirlooms.

4. There’s always a better antique. Don’t get discouraged if someone buys one you had your eye on. You’ll find something better if you’re patient.