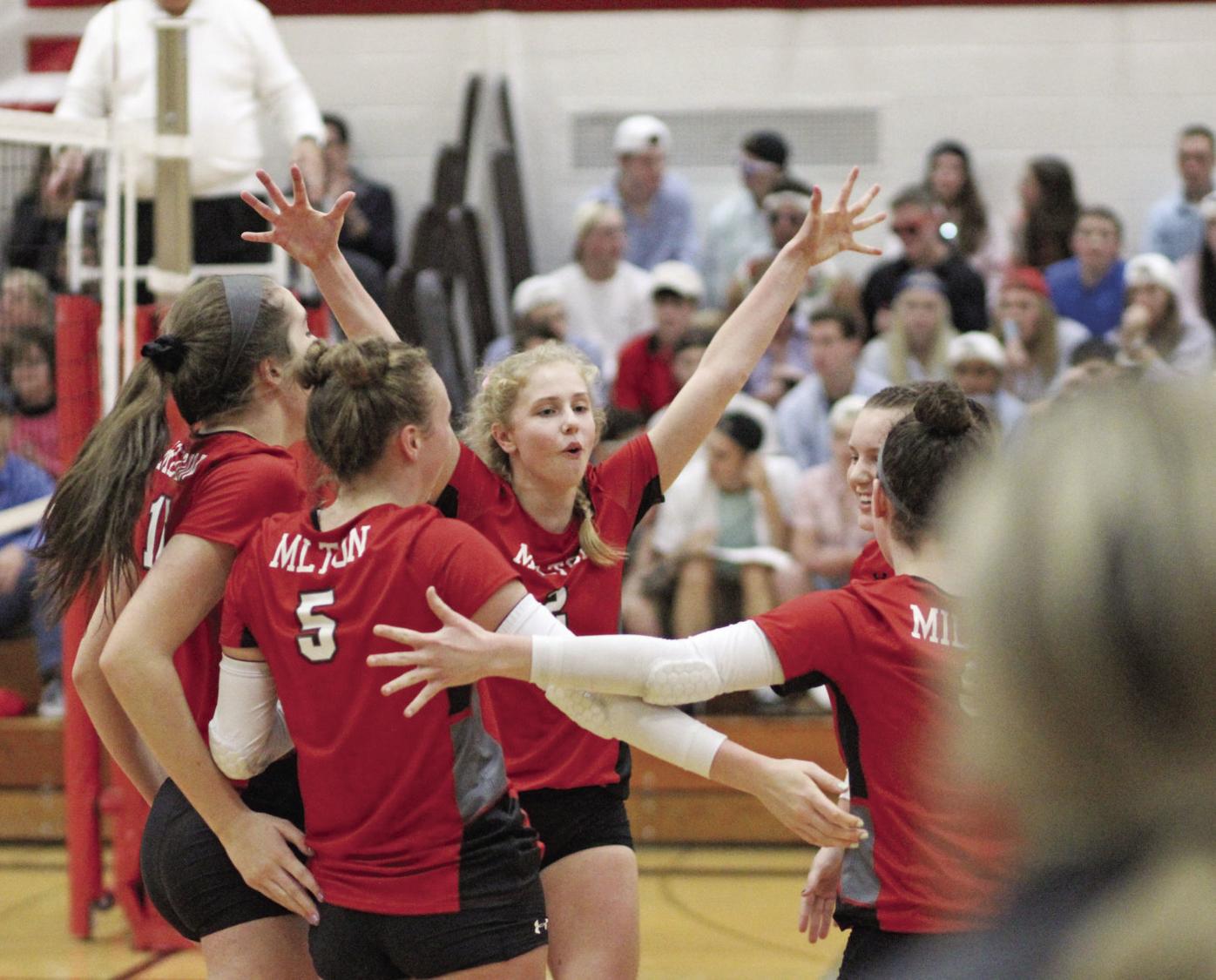 Sophomore Jordan Karlen (2) celebrates after a point in the second set during Milton’s regional-final defeat to Fort Atkinson on Oct. 26 in Milton. Karlen ended with 44 assists. 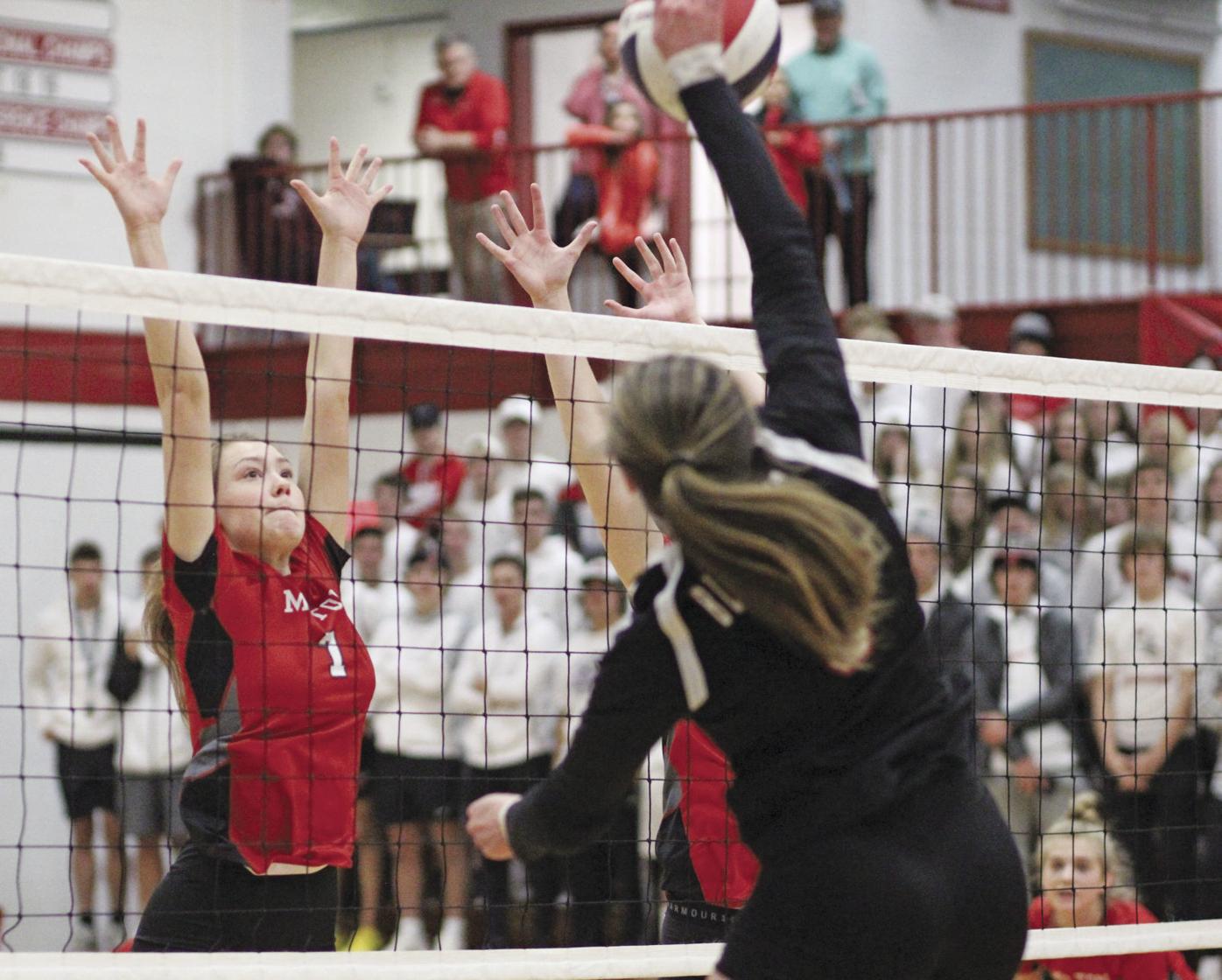 Junior Emily Davis rises up for a block attempt during the Red Hawks’ three-set regional defeat to Fort Atkinson Oct. 26 in Milton.

Sophomore Jordan Karlen (2) celebrates after a point in the second set during Milton’s regional-final defeat to Fort Atkinson on Oct. 26 in Milton. Karlen ended with 44 assists.

Junior Emily Davis rises up for a block attempt during the Red Hawks’ three-set regional defeat to Fort Atkinson Oct. 26 in Milton.

“The better team won,” Hansen said. “Like I told my girls, it’s not about who wanted it more. They’re a better team than us. I got good players, they (Fort Atkinson) just played together well.

The Blackhawks never trailed in the first two sets.

“We’ve been working on finding our own tempo and moving past mistakes on the court and taking momentum and really running with it,” Fort Atkinson head coach Liz Gnatzig said. “The girls talked before the game that this was going to be the moment we turn a new leaf. We took that momentum for everything it was worth and they truly played to that. They started off strong and never looked back.”

The Red Hawks got it down to 14-11 in the second set, but three straight points from Fort Atkinson put the Blackhawks up 17-11, forcing a Milton timeout.

The Blackhawks went on to score six of the next 13 points to close out the set.

Sophomore Callie Krause powered the Blackhawks early in the third set with a 6-0 service run to give Fort Atkinson a 9-2 lead.

Krause served three aces during the run. She ended the night with five total.

“She works really hard in practice acing me in the far-five corner,” said senior libero Jadyn Krause, sister of Callie. “She’s been working on her line shot. She’s super consistent with that.”

Junior Nora Stuckey finally broke the service streak with a kill to make it 9-3 Fort Atkinson. The Red Hawks worked the deficit down to 13-9 and an ace and kill from senior Abbey Falk cut the lead to two.

After consecutive errors and another ace from Falk, Milton had its first lead of the match at 14-13.

“It took us some time to adjust,” Falk said. “I think in the third set once we started rolling, getting used to everything we felt like we were building it back together.”

Falk finished the match with 12 kills and three aces.

Fort Atkinson wrestled back control of the match, tying the game at 19-19 after an ace from Emma Mans and scored the next four points off Milton errors.

The Red Hawks wouldn’t see the lead the rest of the set.

Steffes and Mans caused problems at the net throughout the night for Milton, with Mans collecting a team-high 18 kills.

“We couldn’t stop Rylie and we couldn’t stop Emma,” Hansen said. “They hit the heck out of the ball, more power to them. We could only do what we could to contain them. It’s like Michael Jordan, let them get their points and try to take care of everyone else.”

“Both of them (Steffes and Mans) went with the intention of terminating the ball and I think you could see that in every swing that they made,” Gnatzig said.

“They’re a good defense,” Hansen said. “Their libero had a heck of a game. We knew to keep the ball away from her, but we couldn’t.”

“She knew how much this game meant to the seniors,” Falk said. “She knew how big it was for us. It meant that she would risk her body to play for us.”

“I appreciate my seniors, we’re going to miss them,” Hansen said.

“The program (volleyball) has changed me to a person I never thought I would be,” Falk said. “All the coaches and teammates I’ve had. I just can’t describe what this program has meant to me these last four years.”