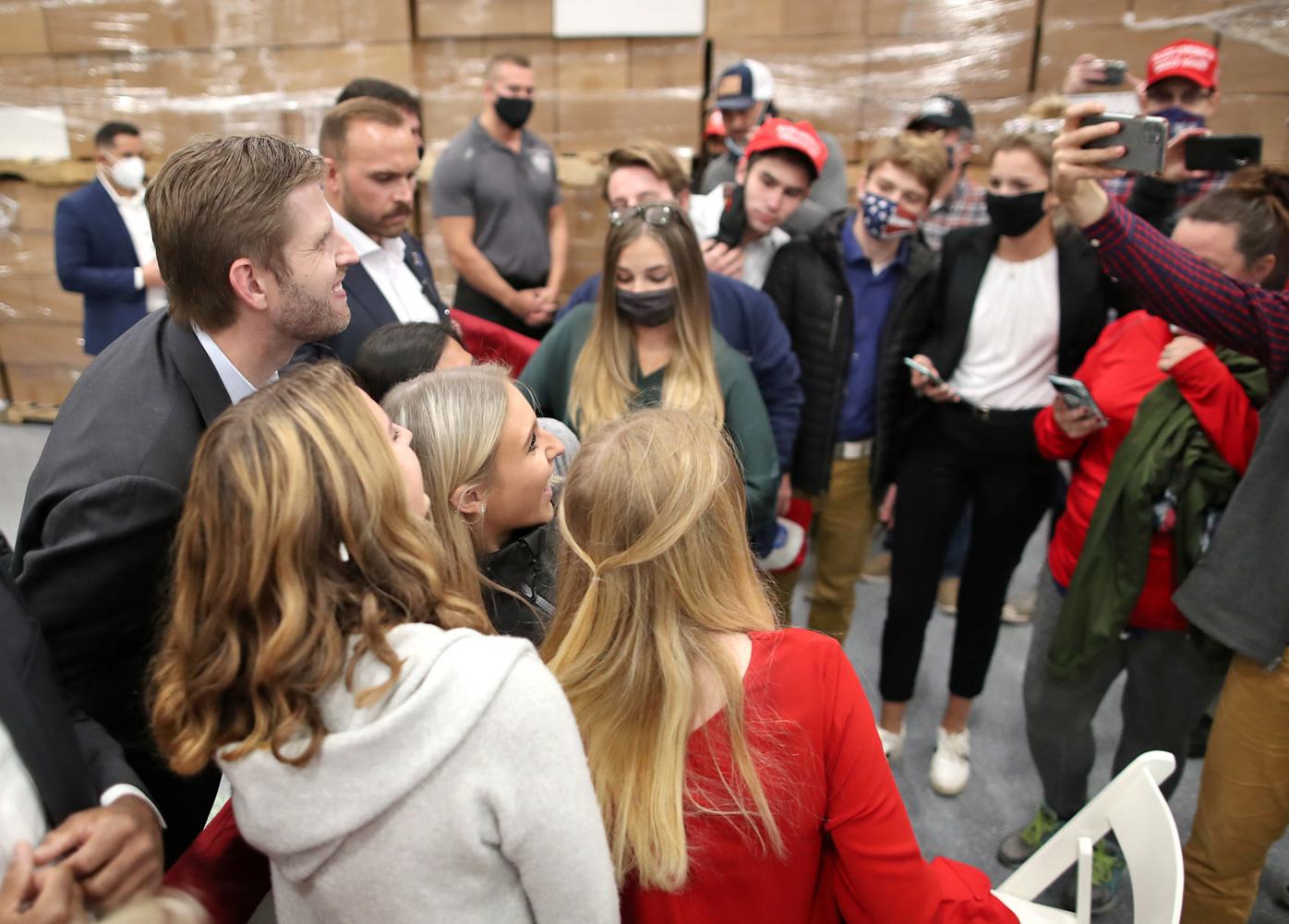 Eric Trump mingles with the crowd at Diamond Assets in Milton after speaking at a campaign rally for his father, President Donald Trump, on Monday. 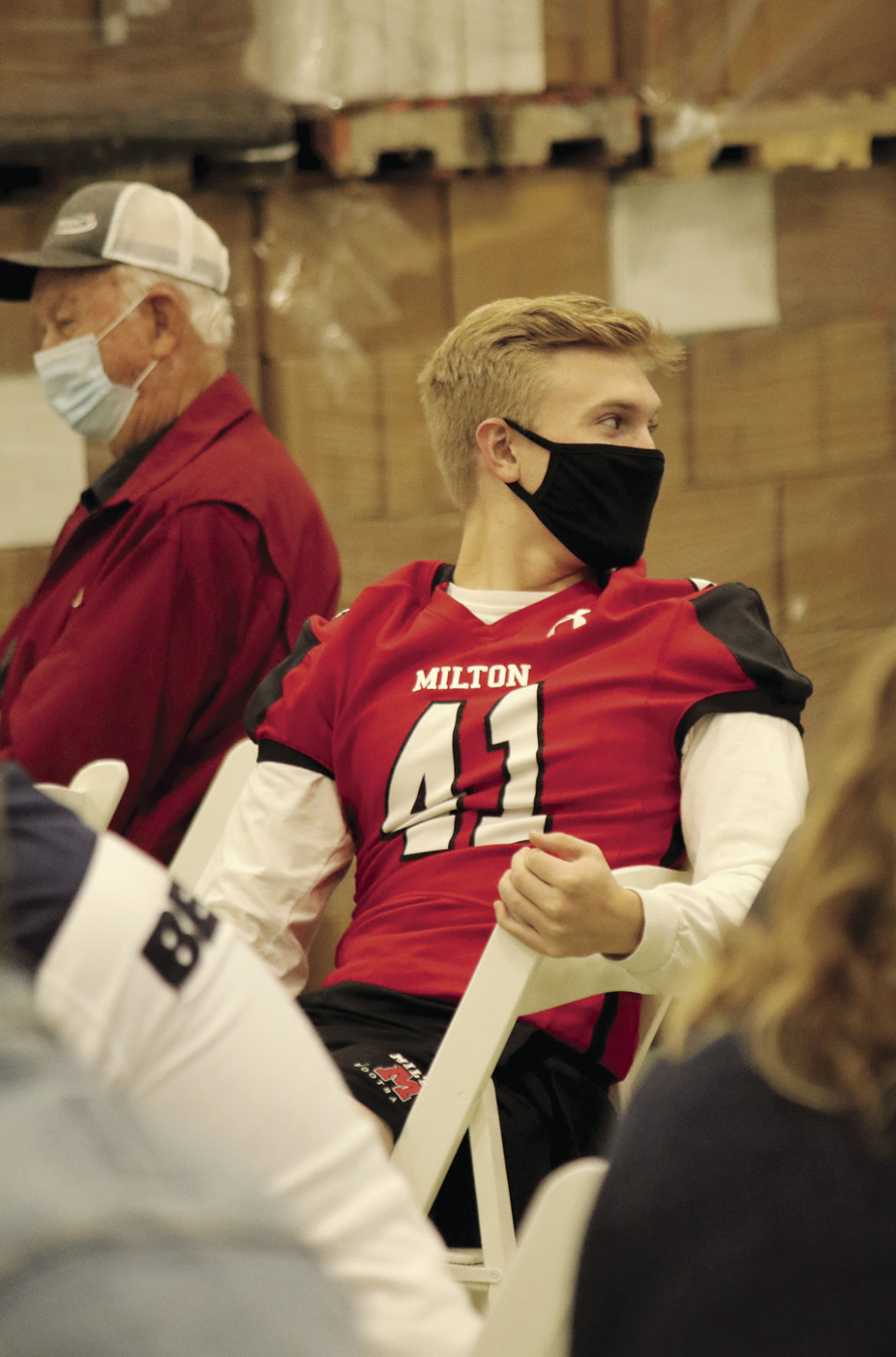 Logan Knudsen turns to have a conversation while waiting for Eric Trump to speak. 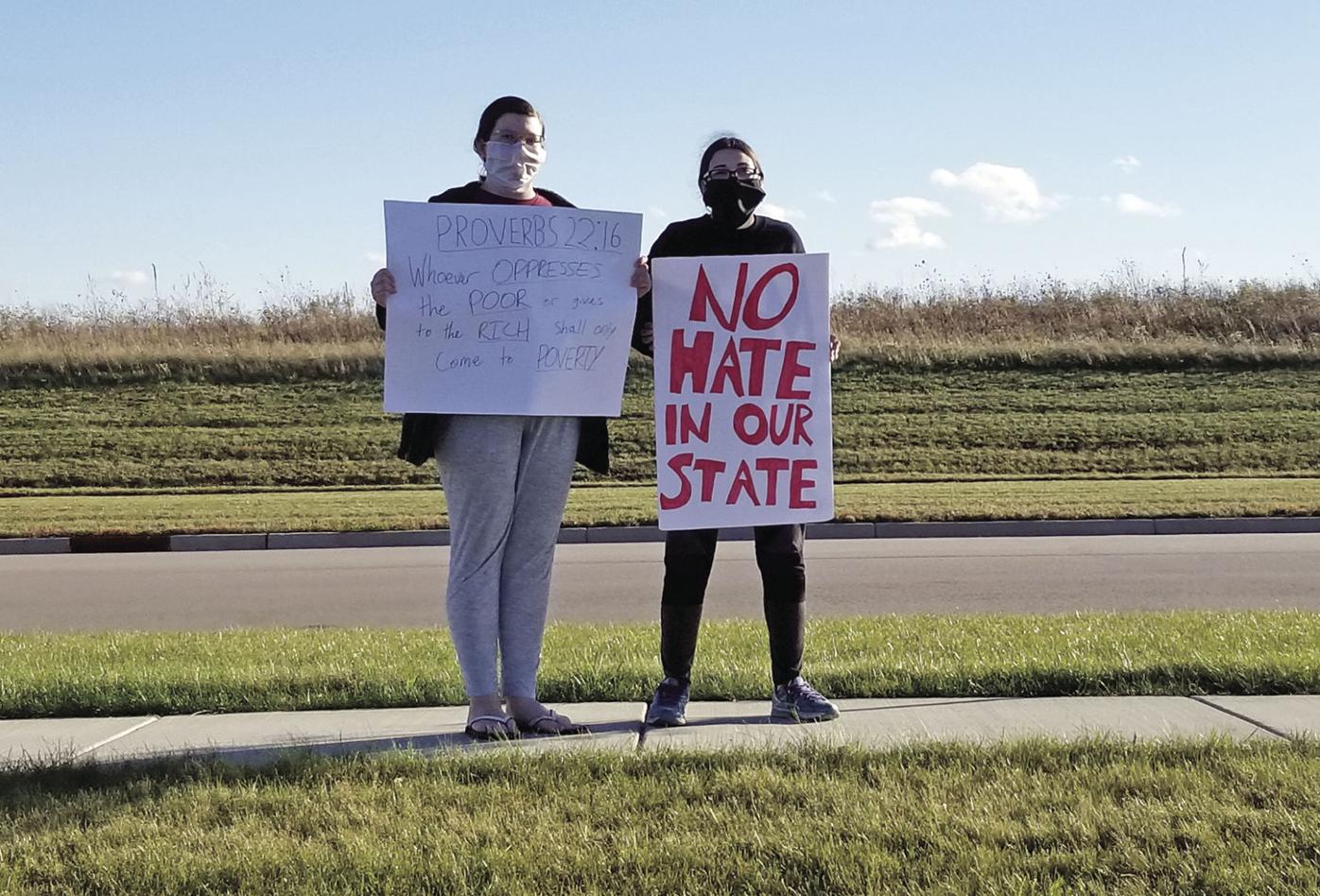 Sisters Laine (at left) and Susanna Bucklin hold signs standing outside Diamond Assets on Monday. They are not Trump supporters.

Eric Trump mingles with the crowd at Diamond Assets in Milton after speaking at a campaign rally for his father, President Donald Trump, on Monday.

Logan Knudsen turns to have a conversation while waiting for Eric Trump to speak.

Sisters Laine (at left) and Susanna Bucklin hold signs standing outside Diamond Assets on Monday. They are not Trump supporters.

A rural Milton woman held a sign that said, “Women for Trump.”

The Milton Courier asked her about her sign and her presidential candidate as she left the Trump campaign event Monday at Diamond Assets.

“He’s empowering women, he’s promoting women and he’s got a lot more women in his administration in important positions,” said the woman who gave her first name only.

“I don’t think I want to put that,” she said about her last name. “We don’t want to have any hassles from anybody. You know how some people get nasty and unfortunately that’s how it is.”

The Milton Courier doesn’t generally include people in articles if they only give a first name, but the next person interviewed commented on that very topic.

“When I talk to people my mom’s age or my grandparents’ age, they don’t want to share who they vote for,” said Susanna Bucklin, 20, of Janesville who was standing on the sidewalk with her sister.

Political division is a problem across the spectrum, she said. By not having a dialog, she said, “I just feel like we’re making it worse.

“Young people put all over their social media who they vote for,” she said. “Whether that’s good or bad, at least we’re having the discussion, and I think that’s the most important thing.”

Susanna and her sister, Laine, 18, weren’t afraid to share that they were not Trump supporters. Both had signs in their hands.

Before Eric Trump spoke, Logan Knudsen, 18, who was wearing a Milton High School football jersey, said, “I wanted to be here today because it’s going to be my first election I’m ever going to get to vote for. And it’s such a crucial one. I think Donald Trump has done an excellent job. I support everything he’s done. I think he’s kept all his promises he’s made. I’m just excited to get to vote for him so here I am.”

Knudsen said he not only wanted to show his support but planned to share with his voting-age friends what he had heard.

Emma Conrad of Milton also wasn’t old enough to vote in the last presidential election but was at the event to show her support for President Trump.

“It’s not easy,” she said. “I try to avoid the topic as much as I can but yah, I’m coming out as a conservative right now.”

“Conservative” to her means people work for their money and she said it does not mean socialism.

Jeff Snowden of Edgerton wanted to show support for Trump and said, “I’m definitely excited to be here.”

Commenting on the difference between being in-person and not, Republican Tawny Gustina, who is running for Wisconsin’s 45th Assembly District, said: “Mask or no mask—because I don’t typically wear a mask—the vibe that you get—you can see it, you can feel it in your heart.”

Watching a computer or TV screen is impersonal, she said, “You don’t feel that positive vibe when you’re together.”