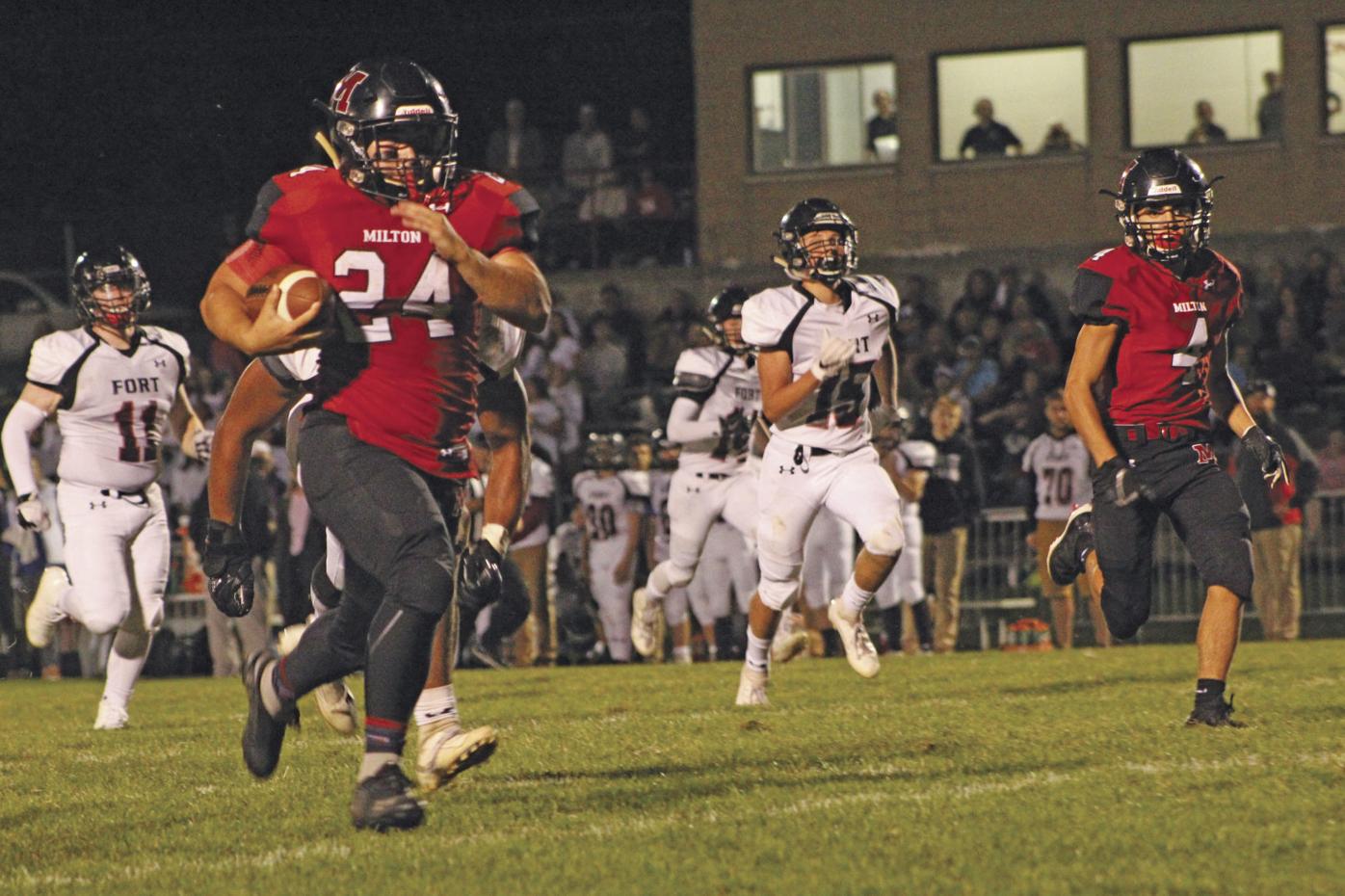 Senior running back Jerry Jones outruns the Fort Atkinson defense on his way to a 61-yard touchdown Sept. 6 at Anderson Field. Jones collected 157 total yards in the Milton victory. 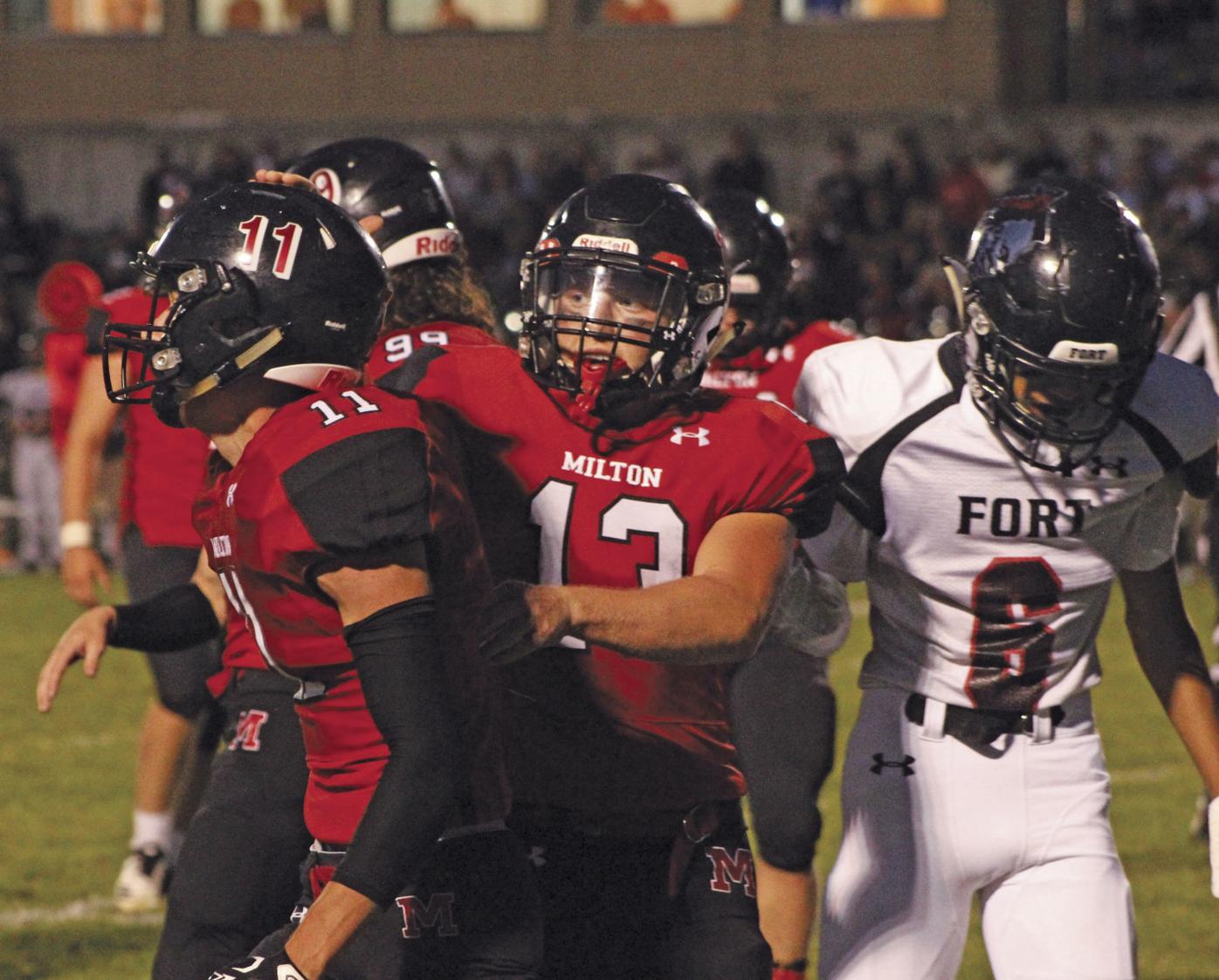 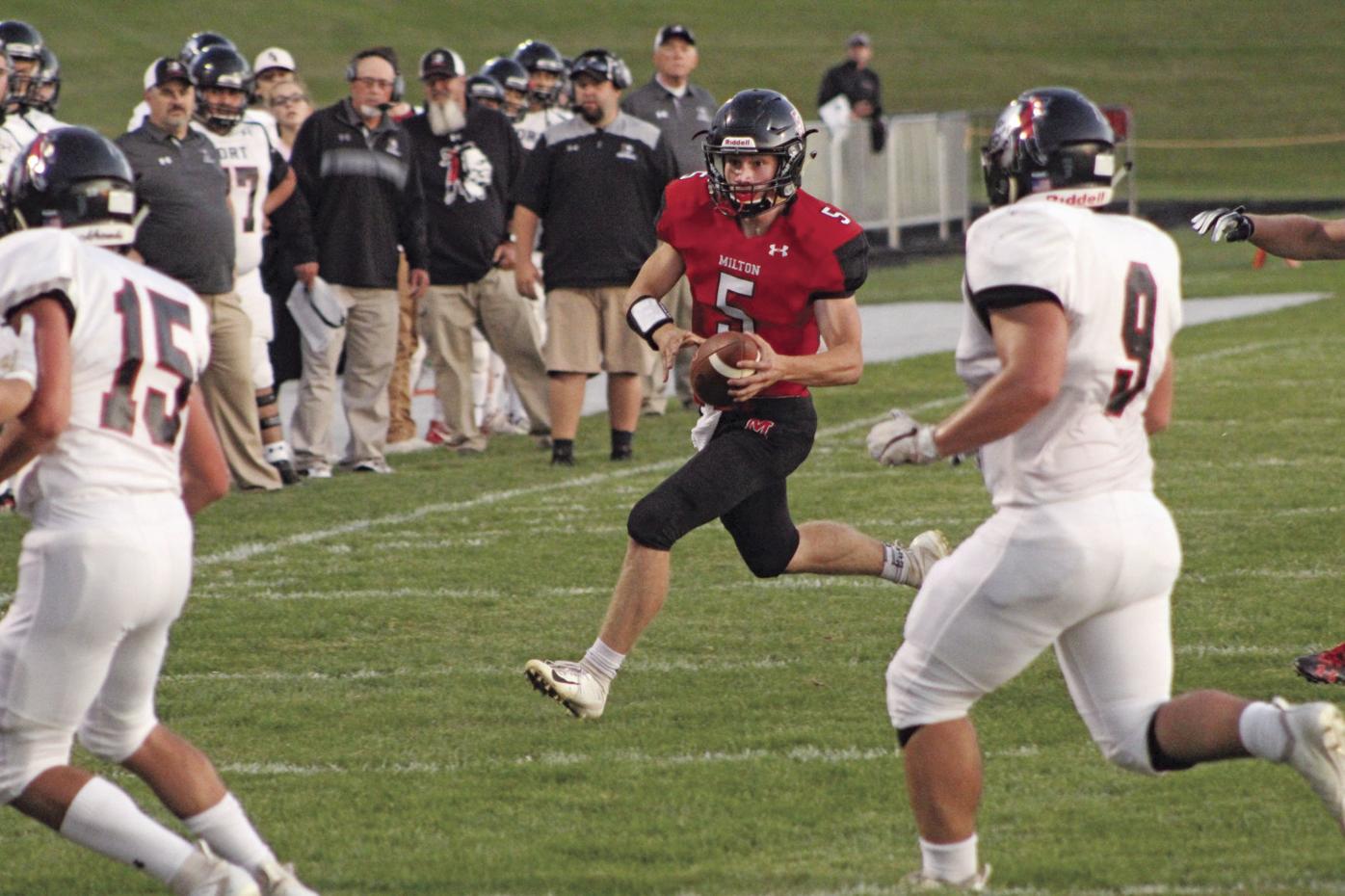 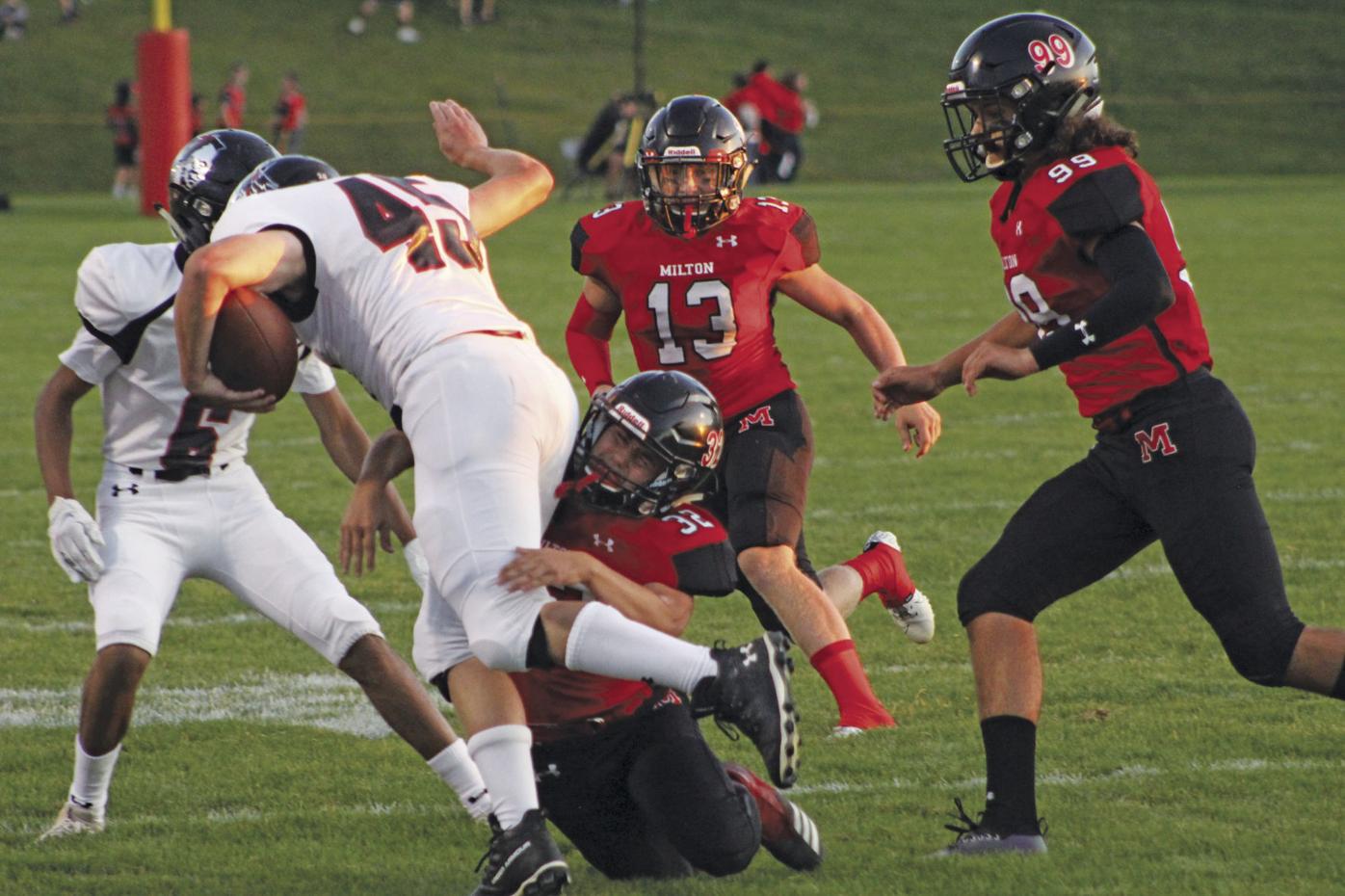 Junior cornerback Joseph Jones wraps up a tackle in the Red Hawks’ 41-7 win over Fort Atkinson Sept. 6. Milton gave up just one score against the Blackhawks, a touchdown in the fourth quarter.

Senior running back Jerry Jones outruns the Fort Atkinson defense on his way to a 61-yard touchdown Sept. 6 at Anderson Field. Jones collected 157 total yards in the Milton victory.

Junior cornerback Joseph Jones wraps up a tackle in the Red Hawks’ 41-7 win over Fort Atkinson Sept. 6. Milton gave up just one score against the Blackhawks, a touchdown in the fourth quarter.

Milton is playing with some confidence this season, and the results are reflecting that.

Milton moved to 3-0 with the win and has combined to outscore opponents 136-22 on the season.

“We’ve had confidence with the new coaching staff ever since that first game,” senior safety Jordan Stivarius said.

“We’re coming out with swagger and playing with confidence,” Stivarius added.

The Red Hawks jumped out to a 34-0 advantage at halftime against the Blackhawks.

“We’ve done what we’ve preached since we got here and that’s play fast aggressive defense and just grind it out on offense,” Wedig said. “That’s exactly what we did again today.”

The Milton offense highlighted by a three-touchdown day from senior running back Jerry Jones and the defense almost pitched another defense, giving up just one touchdown and 157 total yards.

“We have a good front, good linebackers, we just have smart players on defense,” Stivarius said.

After forcing a three and out on the first possession of the game, the Red Hawks struck quickly on offense with a 26-yard touchdown from senior Dane Nelson, who hauled in the pass in the right-corner of the end zone.

After another three and out forced by the Milton defense, Senior running back Jerry Jones put Milton up 12-0 after he weaved his way through the Blackhawk defense with an 11-yard touchdown run with just 1:37 left in the first.

The Blackhawks failed to pick up a first down on their third possession of the game and once again, the Milton offense got back to work.

This time it was senior running back Nick Huber, who scored five rushing touchdowns for Milton last week, who found the end zone.

Huber ran into the end zone with an eight-yard burst to the right-side of the field.

After the two-point conversion, the Red Hawks led 20-0 with 9:52 left in the second quarter.

The Blackhawks picked up their first first down of the game on its fourth possession, but was forced into a fourth and long and punted back to the Red Hawks.

Nelson brought in his second touchdown of the game with a 10 yarder from the arm of Jordahl with 4:38 left in the half to balloon the Red Hawk lead to 27-0.

The score was Nelson’s fifth of the year.

A few minutes later, Jones rattled off his second touchdown of the night as he sped his way to a 61-yard touchdown run.

After collecting 36 yards the first game of the season, Jones has amassed 257 yards for the Red Hawks last two contests.

The score put Milton up 34-0 with 1:58 left in the half. It was Milton’s fifth score in as many possessions.

The Red Hawks picked up where they left off after the break.

On the first possession of the second half, Milton got put into a fourth and 17 from the Blackhawk 27, but a Jordahl screen pass to Jones, set up a 27-yard score to extend the Red Hawk lead to 41-0 with 8:03 left in the third.

Jordahl finished 5 for 10 through the air, good for 89 yards and three touchdowns. Jordahl has thrown seven touchdowns on the season and is yet to throw an interception.

Fort Atkinson broke up the shutout with 3:30 left in the game thanks to an 11-yard touchdown run from senior Mika Gutoski.

A shutout Friday would have been the Red Hawks’ second straight.

“Gus [Wedig, defensive coordinator] was a little upset with the second group that went in,” Wedig said “We felt like they didn’t play with the intensity we want them to play with. But I thought our first group that first half kept us on a short field the whole night, which led to some quick scores.”

Milton will head back on the road as the Red Hawks take on Monona Grove (1-2, 1-0) Friday at 7 p.m. The Silver Eagles are the two-time reigning Badger South champions and have not lost a conference game since 2016.

“I preach to these guys, every week we go and prepare to win the game,” Wedig said. “So we’re going to prepare like we do with any other team.”

“We haven’t really proven ourselves yet, we haven’t played any bigger teams that use to kick our butts last season,” Stivarius said. “Like Logan Knudsen said in the huddle after the game, there is a difference between being arrogant and confident, and he said he sensed a little arrogance after the game. We just can’t be arrogant, we got to be confident and playing with some swagger.”