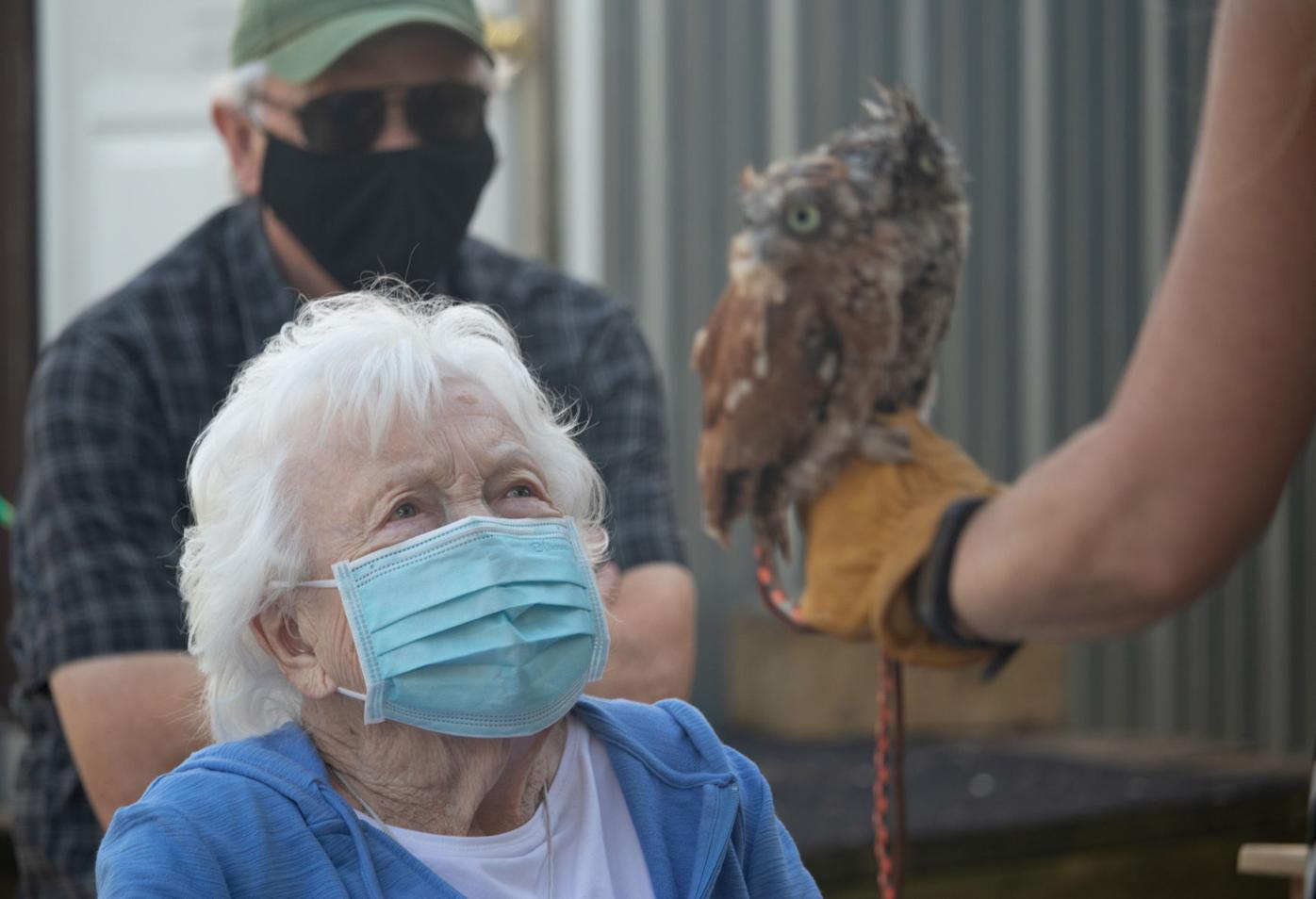 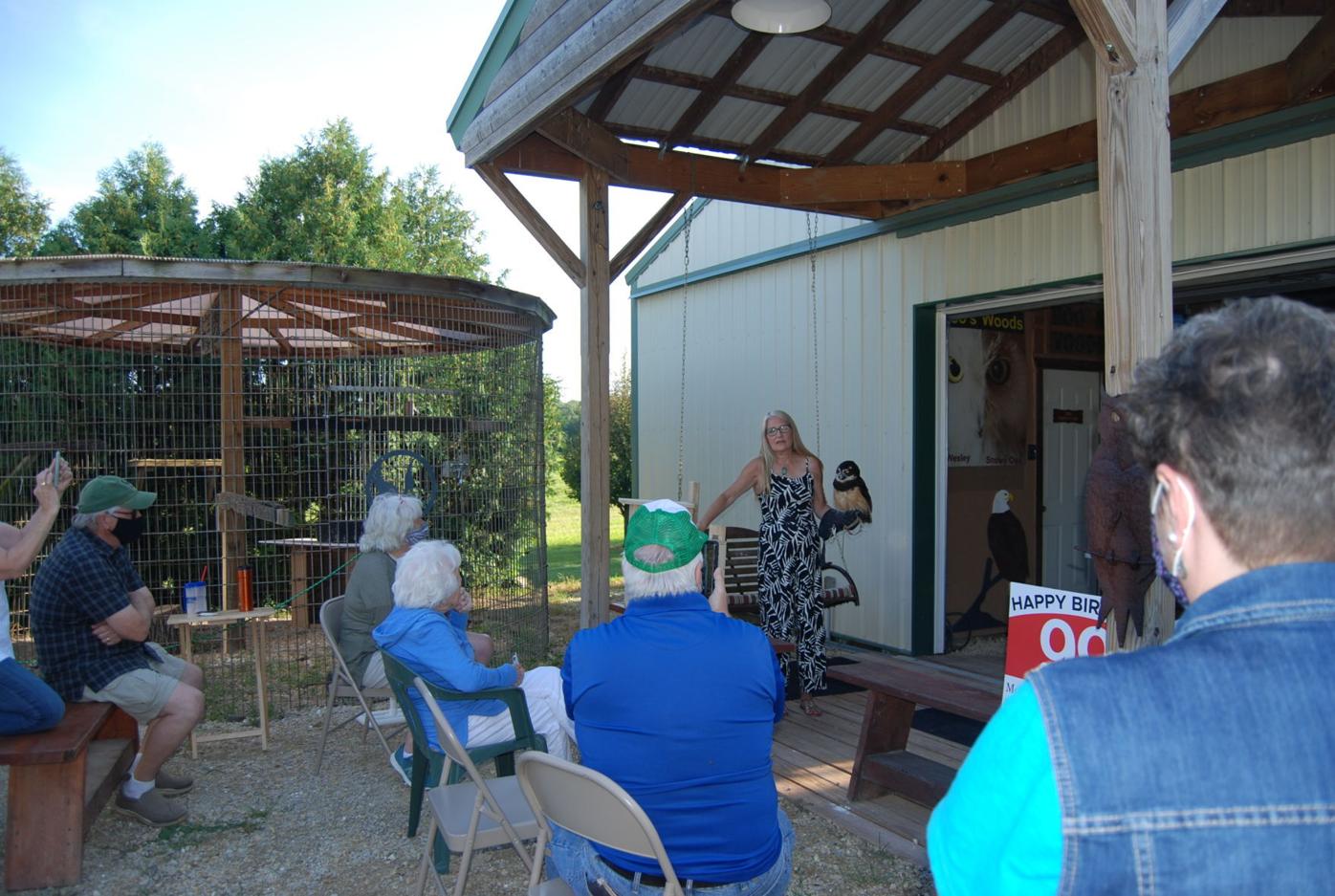 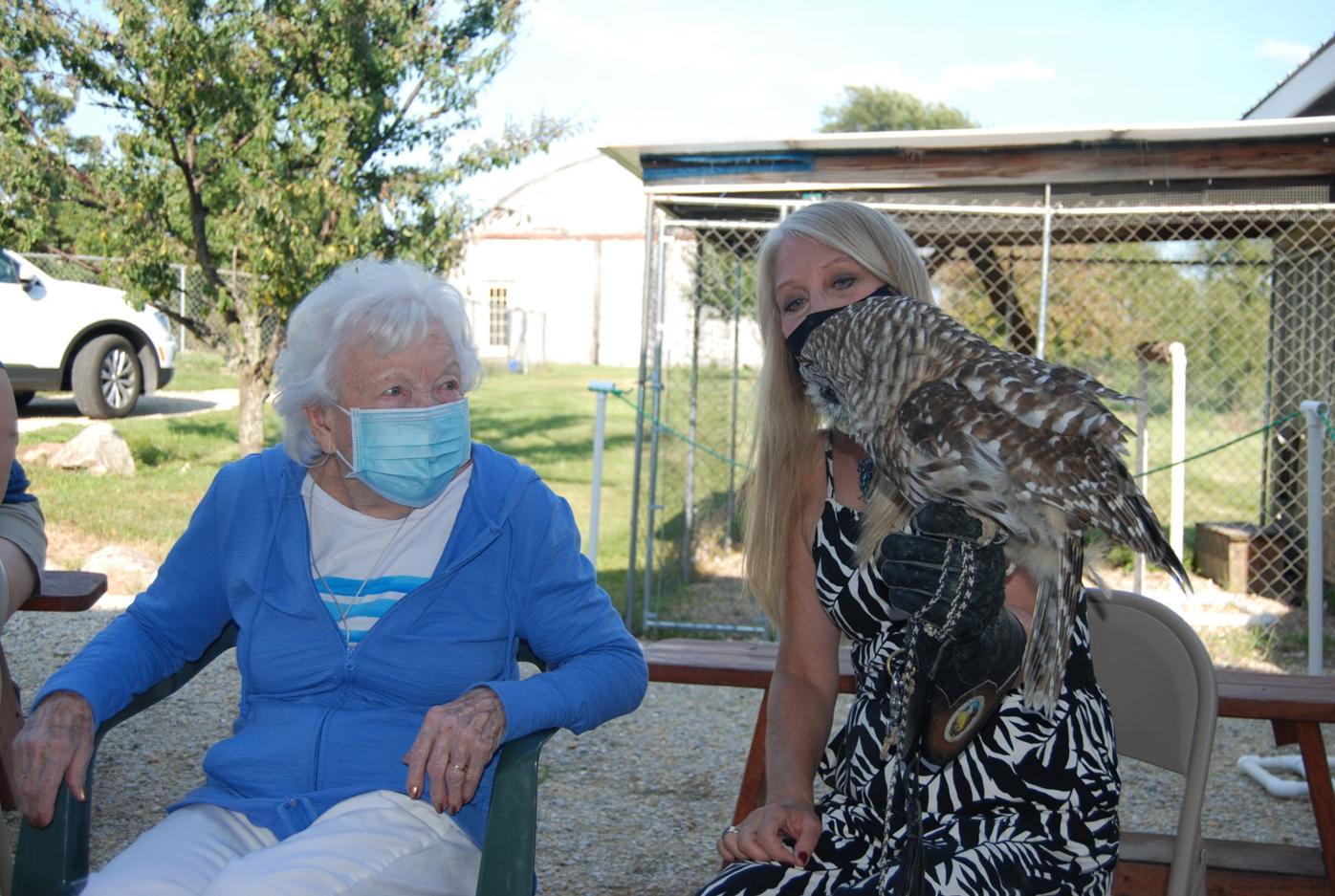 Celebrating her 99th birthday, Connie Hefty, at left, Verona, meets Hoo’s Woods Founder and Director Dianne Moller and “Clark,” an education ambassador at Hoo’s Woods. Clark is a 12-year-old barred owl. Connie developed a fascination with barred owls after several made a nest on her daughter Jackie’s property.

Celebrating her 99th birthday, Connie Hefty, at left, Verona, meets Hoo’s Woods Founder and Director Dianne Moller and “Clark,” an education ambassador at Hoo’s Woods. Clark is a 12-year-old barred owl. Connie developed a fascination with barred owls after several made a nest on her daughter Jackie’s property.

The owner of Whispering Woodlands, a 12-acre artist’s retreat in Verona, Jackie said the facility closed in March as a COVID-19 safety precaution and particularly to help keep Connie safe.

The mother of five children, Connie’s family is big, and spread out across the Madison area, Jackie said. While Connie lives with one of Jackie’s siblings, she visits with Jackie daily.

Together, the mother-daughter team found projects to keep busy: In March and April, they made 100 cloth face coverings and donated them to area hospitals. More recently, they have been using recycled cloth from area thrift stores to make table runners for resale when the retreat reopens. Connie does the fringing, Jackie said.

In February, the pair noticed they were being visited by a barred owl. For Connie, whom Jackie described as a nature enthusiast, the owl became a fascination.

Connie grew up on a farm, and in the 1970s and 1980s, Jackie said her parents owned Hefty’s Skillet Creek campgrounds in Baraboo.

Once the owl arrived, Jackie said Connie would go outside and look for the bird. In time, the women noticed the owl had made a nest and, as the months passed, it raised two fledglings.

Connie has some vision impairment, Jackie said, so she took photographs of the owls and put them on a computer so Connie could see them.

After a while, Jackie said, “We began hearing them, but not seeing them on a regular basis.”

As Connie’s birthday neared, Jackie had an idea: several years earlier, she had met Dianne Moller, founder and director of Hoo’s Woods, and remembered she had owls.

The two had a mutual friend in Madison-area artist John Wilde who specializes in painting and rendering Midwestern landscapes and wildlife. In 2016, Jackie said, Wilde was organizing a workshop to teach people how to sketch birds, which he wanted to host at Whispering Woodlands. He had approached Moller to see if she could bring a bird to serve as a model. Moller arrived in advance of the event with “Oakley,” the spectacled owl, to get a feel for the property, Jackie said. She remembered, she said, how impressed she was with Moller’s ability to transport and handle the bird.

Hoping to create a birthday adventure for Connie, Jackie contacted Moller. They made arrangements for a small, outdoor event where Connie could be safe and see and learn about owls.

“We plan for Mom’s birthdays, but lately they are even more special, and 99 does not come around twice,” Jackie said.

The size of the event was limited to 15, Jackie said, adding the family was concerned with exposing Connie to COVID.

“Nobody wants Mom to get it, so we have done drive-bys at different people’s homes, but there has not been so many family members at once,” Jackie said.

On Aug. 7, Jackie said, Connie knew she was going on a birthday adventure, but what it was and where was left a surprise.

For sport, Jackie said, she gave her mom a hint: “I hooted.”

Connie said she did not know where she was going when she got into the car on Friday. When her daughter “hooted,” she said: “Well, I didn’t catch on.”

She was surprised when she arrived at Hoo’s Woods. She realized it was a celebration in her honor when her family gathered and didn’t leave, she said.

About the event, she said: “It was so well-planned.”

Her favorite part was being so close to “Clark,” the barred owl, she said. Clark was one of five education ambassador owls, who, along with a broad-winged hawk, was presented to Connie and her family.

“Owls are not something you see very often. It has been real special to be able to hear and see them outside our windows,” Jackie said.

While COVID interrupted family life, of the owls she said: “This is something we can share that’s positive and joyful.”