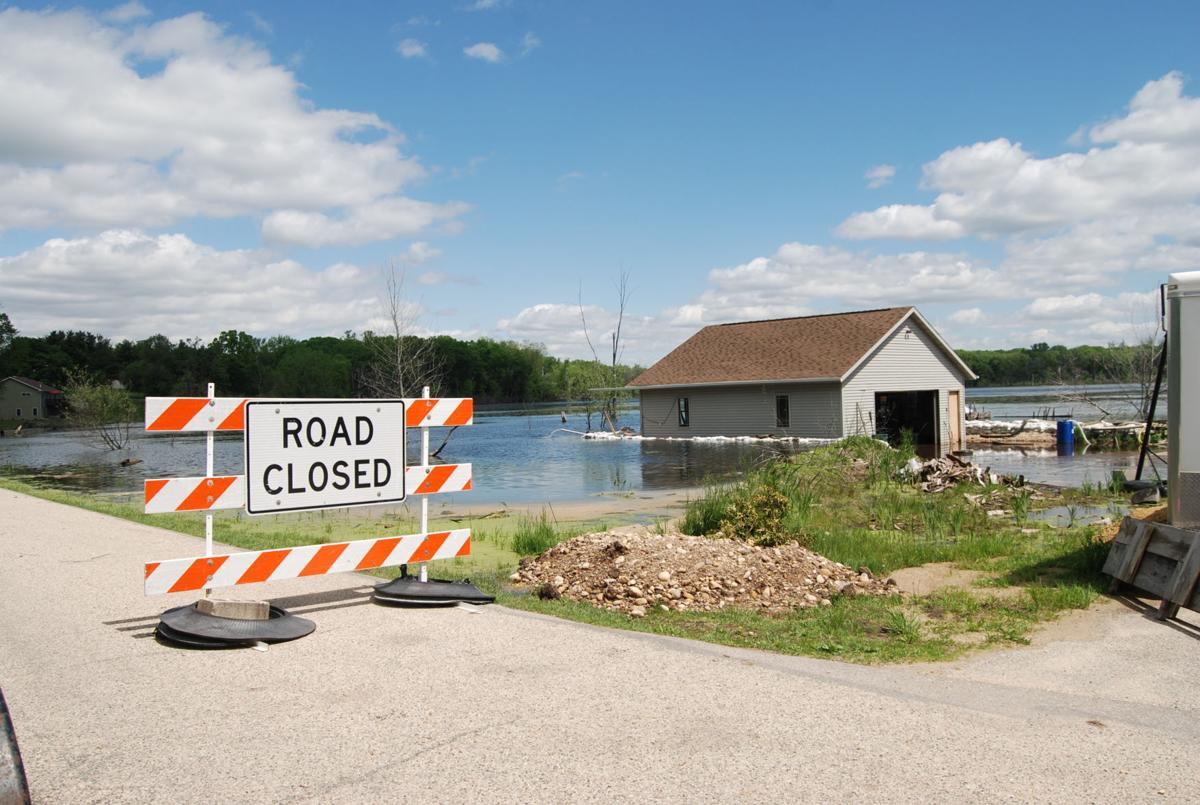 Clear Lake Road has been closed due to flooding. A garage owned by Renee and Josh Kojo on the north side of the road is engulfed by floodwaters from Grass Lake. 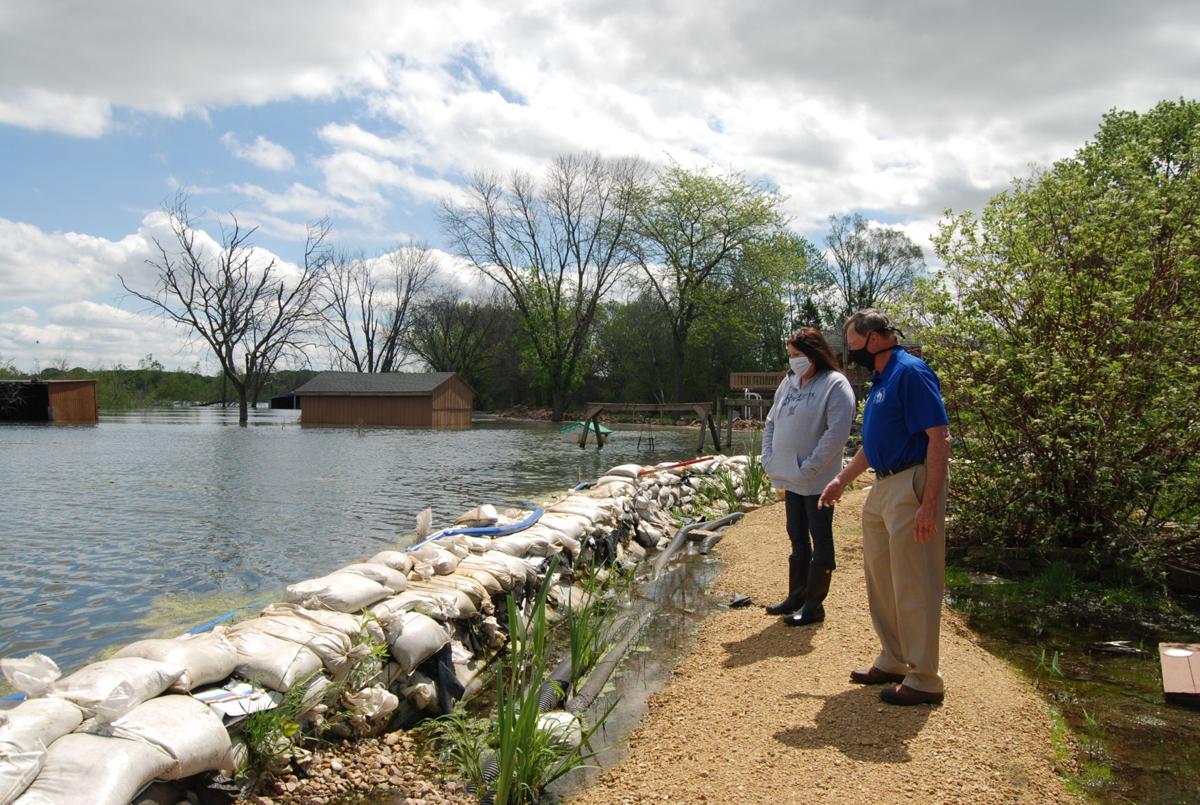 Renee Kojo and State Rep. Don Vruwink stand on a berm situated between sandbags holding back Grass Lake and the Kojo family home. The berm, serving as a path behind the house, is all that is left of dry land between the house and the lake on the five-acre property. 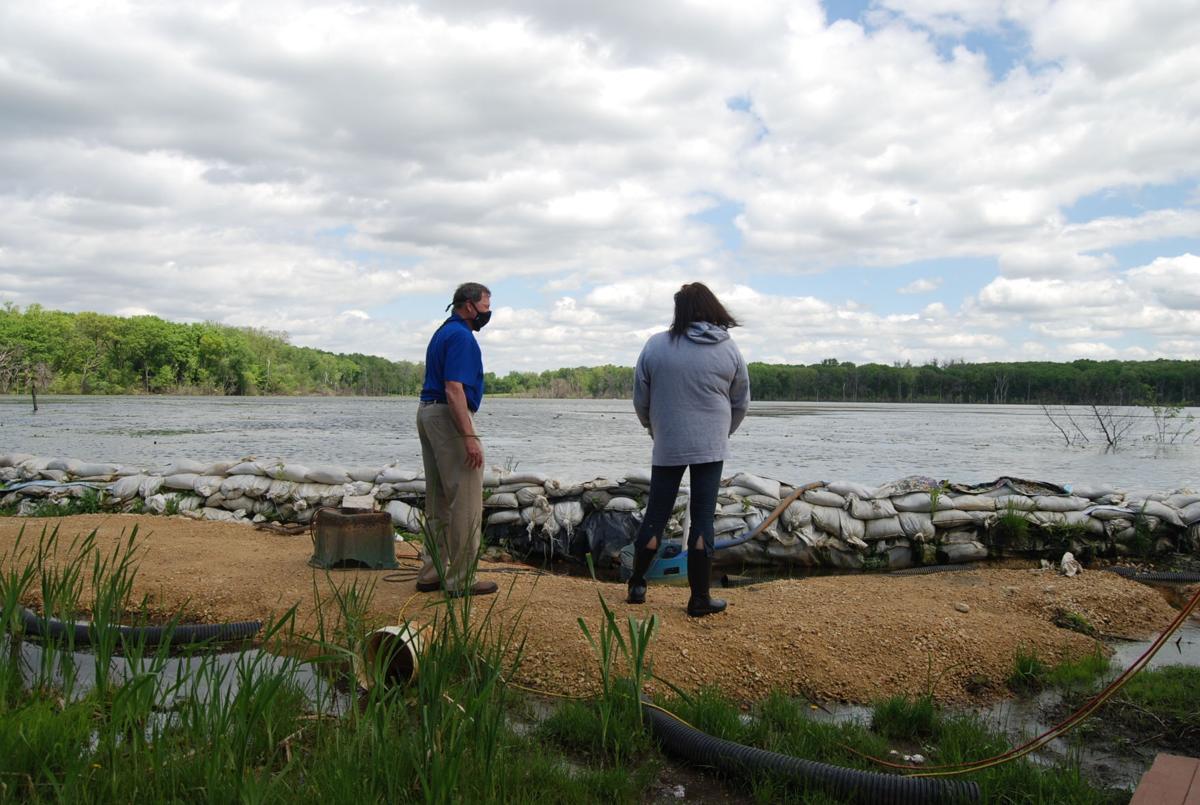 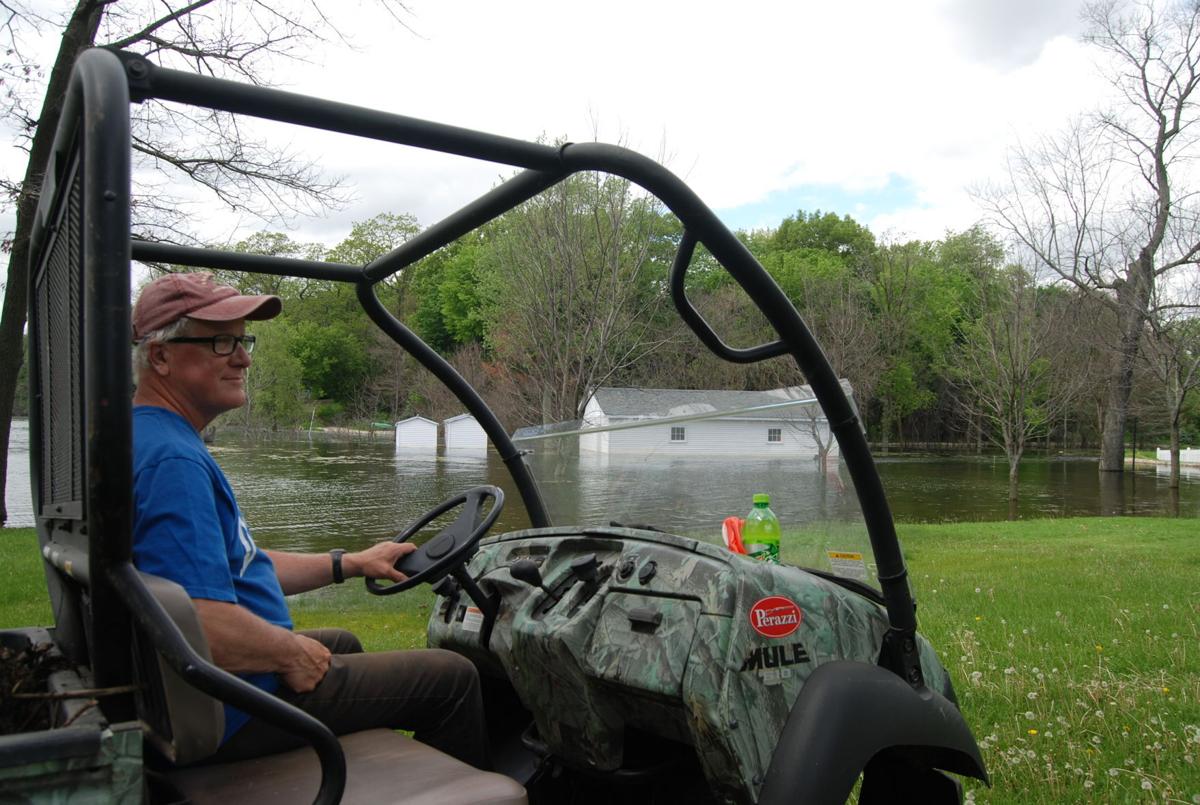 Clear Lake homeowner Bob Schrank points to two outbuildings and a garage on his property that have been engulfed in water since last February. 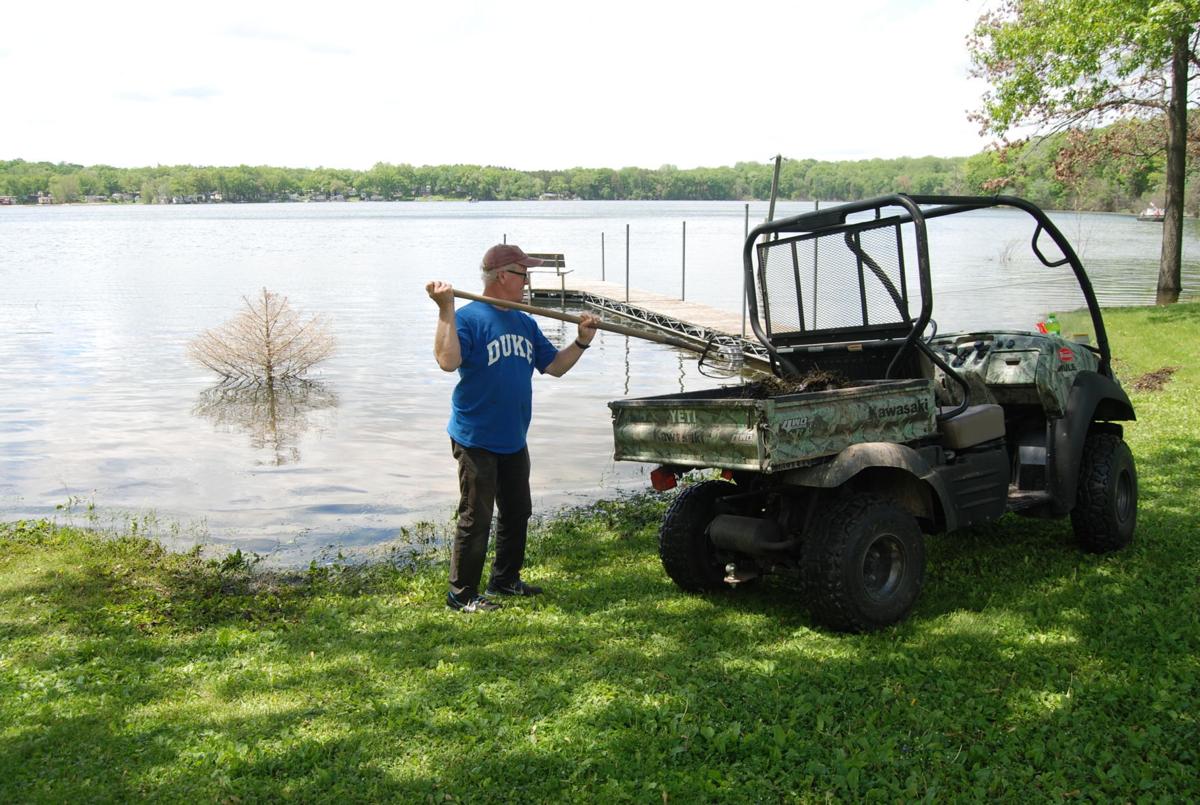 Clear Lake homeowner Bob Schrank removes debris collecting on what’s left of his lawn. Half of his eight-acre property has been underwater for over a year.

Clear Lake Road has been closed due to flooding. A garage owned by Renee and Josh Kojo on the north side of the road is engulfed by floodwaters from Grass Lake.

Renee Kojo and State Rep. Don Vruwink stand on a berm situated between sandbags holding back Grass Lake and the Kojo family home. The berm, serving as a path behind the house, is all that is left of dry land between the house and the lake on the five-acre property.

Clear Lake homeowner Bob Schrank points to two outbuildings and a garage on his property that have been engulfed in water since last February.

Clear Lake homeowner Bob Schrank removes debris collecting on what’s left of his lawn. Half of his eight-acre property has been underwater for over a year.

The US Army Corps of Engineers arrived in the town of Milton Tuesday, May 26, to tour flooded areas along Clear Lake Road and State Highway 59 between Milton and Newville.

Residents living along Clear and Grass lakes have been battling flooding for over a year.

In an email sent to Vruwink’s office Thursday, May 28, Smith said next steps would include drafting “site visit notes” and sharing them with tour participants.

Vruwink said he tapped the Army Corps of Engineers for help after residents on Clear Lake Road expressed safety concerns associated with road closures due to ongoing flooding.

“Clear Lake Road is closed for about 100 feet, but it makes the road impassible and there are barricades. To get to the other side, you have to go through Newville,” Meyer said.

With flooding and barricades in place, Vruwink said, residents on the west side of Clear Lake Road are concerned about potential increases in emergency services response times.

“They get their ambulance and emergency services from Milton and with the road closed, that adds about 10 to 15 minutes to response times,” Vruwink said.

Meyer said up to 30 homes were on the west side of the barricade.

This year, he said, water is also moving from Grass Lake onto the shoulder along Highway 59.

Water is not just on the road, Meyer said. About six houses on Clear Lake Road, situated along the north side of the lake, have been impacted by floodwater. Water also has flooded yards and garages, and some homeowners have had to elevate their driveways.

Last year, Blackhawk Campgrounds, on the south side of Clear Lake, underwent driveway reconstruction to keep access into the campground open.

Vruwink said some residents, as a result of the flooding, have had issues with septic systems.

Vruwink said after receiving calls from residents last year, he contacted the DOT and Rock County officials, and was made aware that they were monitoring the situation.

Vruwink said he hopes the Army Corps of Engineers will conduct a study, looking for sources of increased water levels, while developing strategies for water management.

While some residents have cited rain as a contributing factor, Vruwink said other sources might include an unidentified spring, or a crack caused by a shift in the ground.

Vruwink also hoped, he said, costs incurred to produce a study would be shared between the affected groups. With Grass Lake spilling onto Highway 59, he said, he believed the state would have a stake in finding solutions, along with area property owners and the town of Milton.

“Part of their (Army Corps of Engineers) job is to offer solutions and then local governments can decide what the long-term solutions will be,” Vruwink said, adding: “There has been no cost so far. My goal is to get the township monetary help to keep this from becoming a bigger problem.”

Vruwink said he plans to continue his involvement, noting: “My job as state representative is to help, because people are being impacted. That’s what I was elected for … it’s a safety issue.”

Meyer said Tuesday’s tour offered the engineers an opportunity to “physically analyze the area and put their engineering heads to paper.”

Both Vruwink and Meyer said they expect to learn more from the engineers in two weeks.

Meyer said problems with flooding around Clear and Grass lakes, two water bodies situated close together, have been ongoing since 2008, when the area sustained what he said was a 500-year flood event.

“This is a problem we have been familiar with for a while. The unknown has been what to do with the water. This is the first time the Army Corps of Engineers has been involved,” Meyer said.

In 2008, Meyer said, late winter and early spring thaws caused the Rock River, Lake Koshkonong, and nearby water bodies to flood. As weather warmed, Rock River and Lake Koshkonong floodwaters receded to normal levels, but on Clear and Grass lakes, he said, there are no outlets, leaving evaporation and saturation as the only means through which the water can dissipate.

Since 2008, he said, with the exception of a three-year period around 2012 to 2015, water levels on Clear and Grass lakes have been higher than the 60-year average.

Meyer said, in 2008, he declared a local state of emergency, which gave FEMA (Federal Emergency Management Agency) an ability to offer relief programs to area homeowners affected by flooding.

Renee and Josh Kojo, and their two children, live on Clear Lake Road on the south shore of Grass Lake. The property has been flooded since March of last year.

Today, nearly all but a quarter-acre of the family’s five-acre property is under between three and four feet of water.

Situated near the barricade, Renee said six pumps placed strategically around the property work to keep water from reaching the house. The home does not have a basement, she said.

“When we bought the house, the water was receded, but there was a bunch of rain in February in 2019,” she said.

Josh became concerned about a potential for flooding in October of 2018, she said, and began placing sandbags between the house and the lake.

“In January, the water was closer, so he did another layer,” she said.

With all the rain over recent years, Renee said, “it never gets a chance to evaporate.”

As the water rose, Renee said, she reached out to FEMA.

“We’re not in a flood plain, so they can’t do anything,” she said.

“Nobody knows what to do,” she said.

Friends have been supportive, helping the family place sandbags as the water rose. Keeping pumps running has doubled the electric bill, she said.

Money is an issue, Renee said, adding: “The township doesn’t have the money to fix this problem … I think the solution could be to pump the water to Lake Koshkonong. Evaporation is not going to make this go away.”

Living on Clear Lake Road on the north shore of Clear Lake, Bob and Sharon Schrank face similar problems. With their own and their son’s home situated on eight acres, the couple said more than half of their land is under water. A berm holds the water back from further breaching their home, which has water in the basement. The basement has five inches of water, Bob said, adding that a company he hired to install pumps told him that, even with the pumps running, five inches of water would remain because that’s the level of ground saturation.

Pointing to pictures on her phone, Sharon said before the lake overflowed its banks, she had a beach, and volleyball and fire pits.

Rain was a contributing factor, and the water table is high, Bob said. He estimates that he has spent nearly $10,000 since last spring keeping water at bay.

Tuesday’s visit from the Army Corps of Engineers brought, Bob said, “a glimmer of hope.”