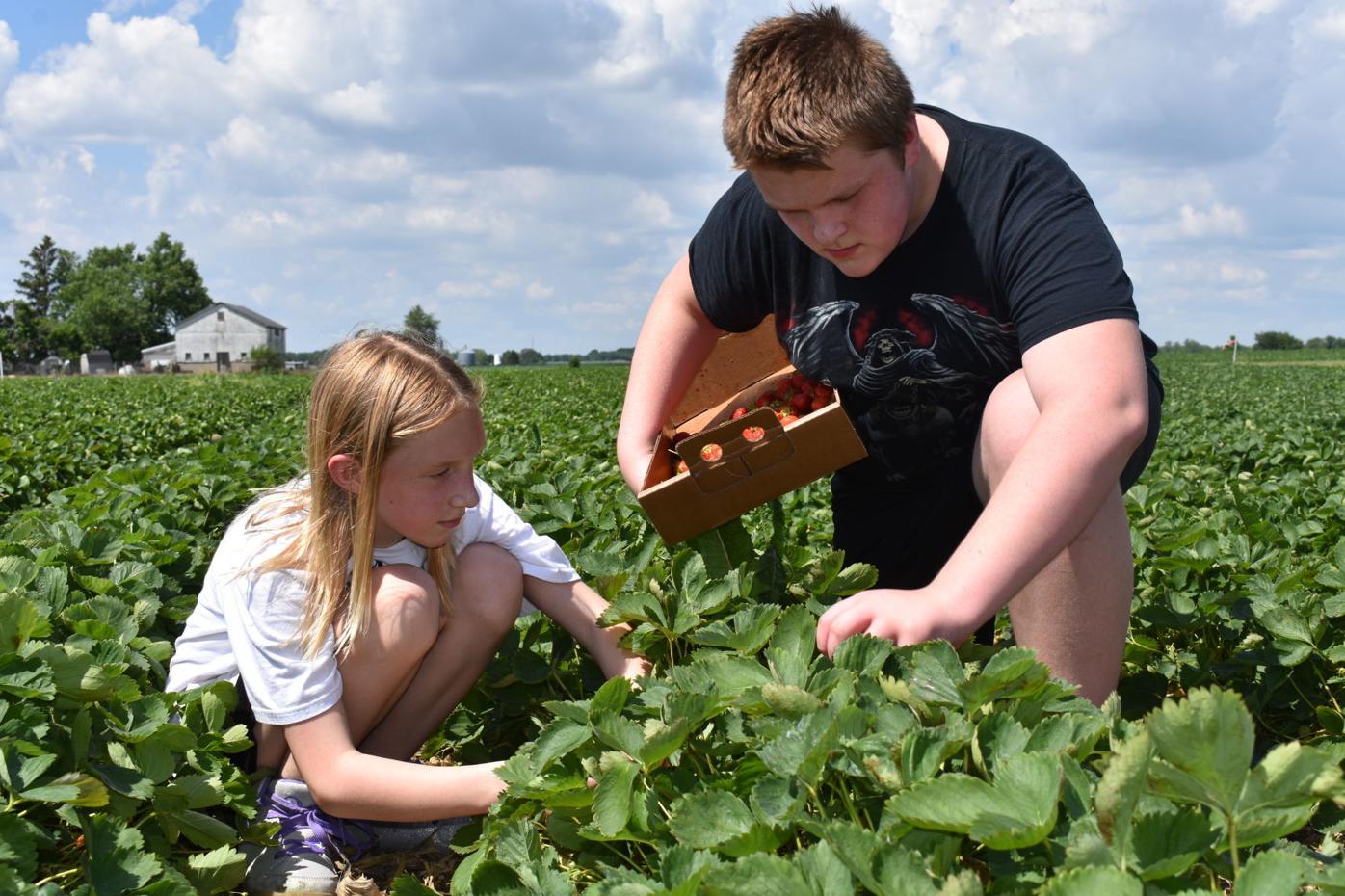 {span}Añya Salzman, 8, and her brother Cian Salzman, 12, pick strawberries Tuesday afternoon at Skelly’s Farm Market. The market opened up pick-your-own strawberries on Monday, a bit early due to hot and humid weather. {/span} 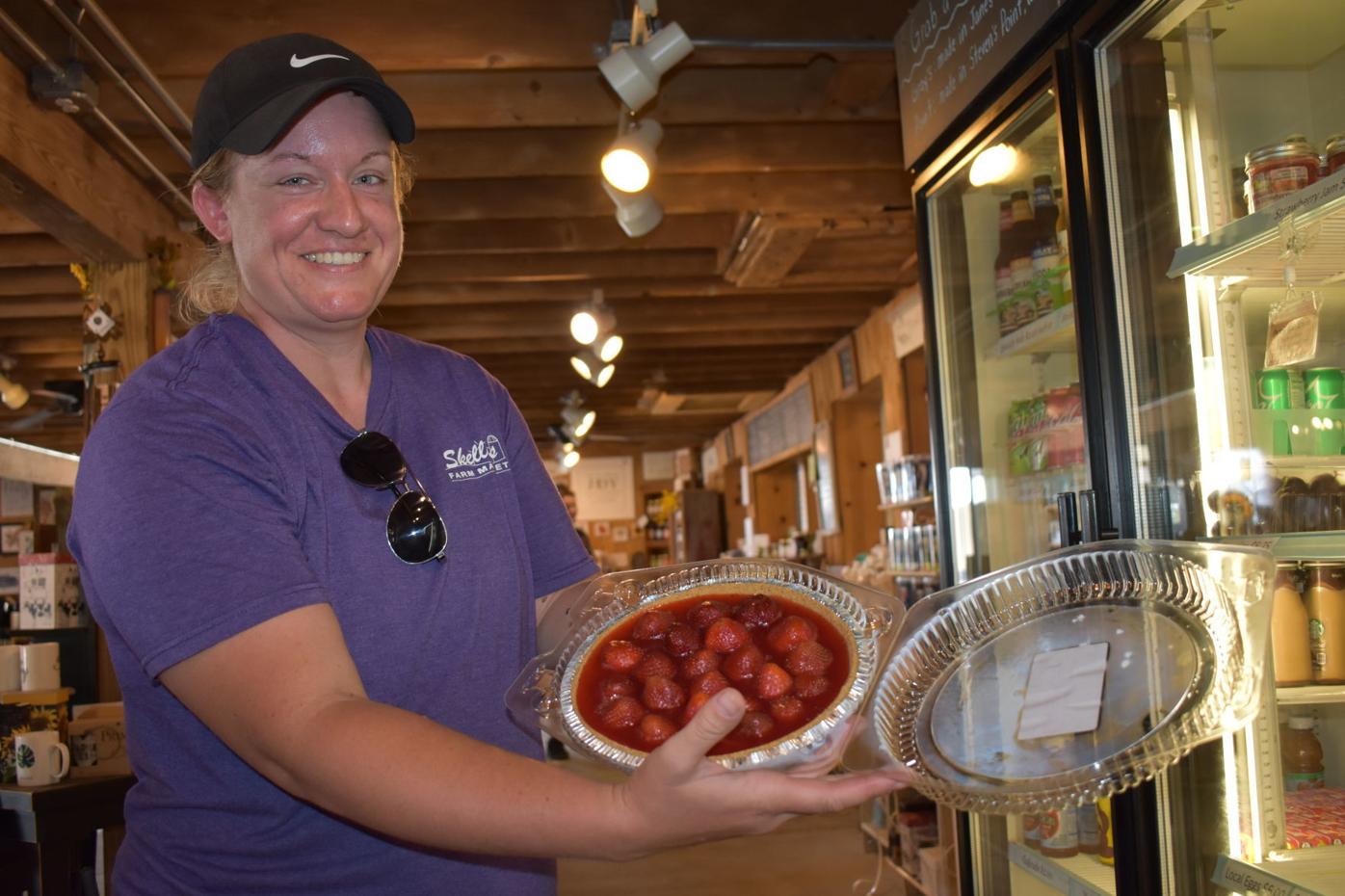 Laura Skelly, co-owner of Skelly’s Farm Market, holds a fresh strawberry pie made from strawberries on the farm. Skelly’s strawberries are ripening bit early this year due to hot and humid weather. The season may be a quick one.

{span}Añya Salzman, 8, and her brother Cian Salzman, 12, pick strawberries Tuesday afternoon at Skelly’s Farm Market. The market opened up pick-your-own strawberries on Monday, a bit early due to hot and humid weather. {/span}

Laura Skelly, co-owner of Skelly’s Farm Market, holds a fresh strawberry pie made from strawberries on the farm. Skelly’s strawberries are ripening bit early this year due to hot and humid weather. The season may be a quick one.

Once mom Cherie Salzman of Janesville opened her van doors on Tuesday afternoon, she could tell the strawberries were ripe.

“It’s the sweetness in the air,” she said. “They are ready.”

The recent heat and humidity has resulted in an early strawberry season much to the delight of eager pickers. Laura Skelly, co-owner of Skelly’s Farm Market in Janesville, said the farm’s pick-your-own strawberry field opened up on Monday and will be open from 7 a.m. — 5 p.m. daily through the likely brief season.

Although only a few families braved the heat this week, those who persevered in the patch were pleased with their plentiful findings.

“It’s fun, but the sun is beating down,” Añya said.

“We are going to make a strawberry cake and strawberry syrup,” mom Cherie Salzman said.

Cian and Añya were joined by their dad, Shawn Salzman, and their siblings, 3-year-old twins Raven and Alastair Pate, on the berry picking adventure. Since school is out, Cherie Salzman said she tries to have a theme for each week to keep her kids busy. With this week being “farm week” it was the perfect time to teach kids the lost art of strawberry picking which she enjoyed as a kid with her mother.

“We wanted to make memories rather than spend a lot of money,” mom said.

Skelly’s Farm Market, 2713 South Hayner Road, will be flooded with berry pickers in the next few weeks. Skelly said there should be an ample supply of strawberries by the weekend.

“With some crazy temperatures this year, our season will likely be shorter than normal, so don’t delay getting your fill of berries,” Skelly said.

The strange strawberry season began in early May with a fluctuation between hot and cool weather. On May 29, a late date for frost, those at the farm had to turn on irrigation to protect the strawberry blossoms.

Skelly explained how the irrigation system, turned on in low temperatures, forms ice on the plants which protect their blossoms. If the blossoms sustain damage around 28 degrees Fahrenheit or lower, they might not produce berries.

“We had 10 nights in early May where we had to use the irrigators. Typically, we average two to three nights in May,” Skelly said.

Fortunately, the blossoms survived and after the recent hot weather a quick ripening of a bountiful crop ensued. While strawberry season is typically the second week in June, Skelly said the berries are ready now. The season will likely be done in two to three weeks, shorter than the typical three to four week season.

“We usually go through July 4, but I don’t think we’ll make it,” she said.

Skelly has been taking to social media to alert customers of the early picking season.

Thanks to the berries’ arrival, Skelly’s started selling its fresh strawberry jam and pies this week.

In the coming week, those at Skelly’s will be evaluating supply to determine if there is enough supply for strawberry stands to be open.