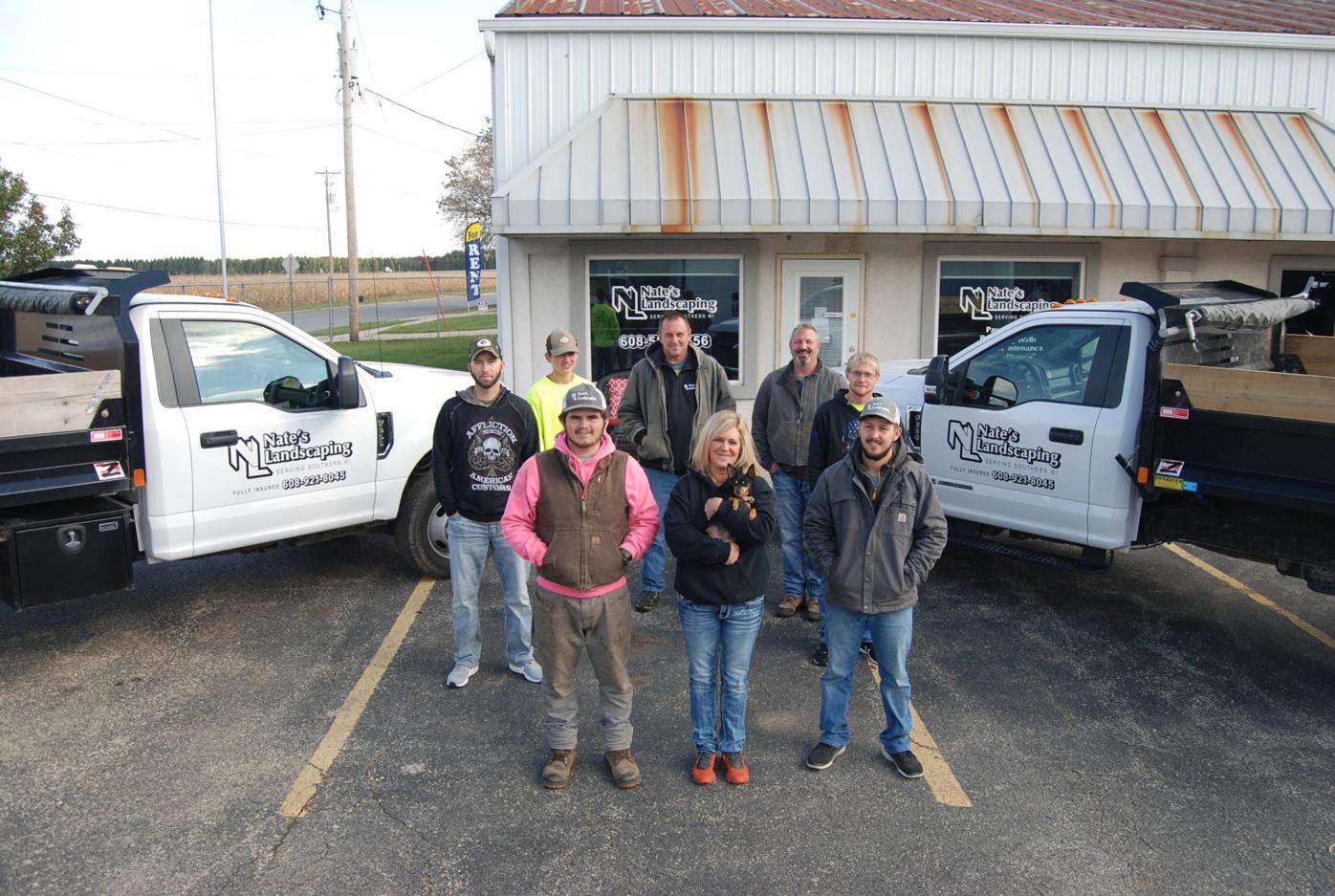 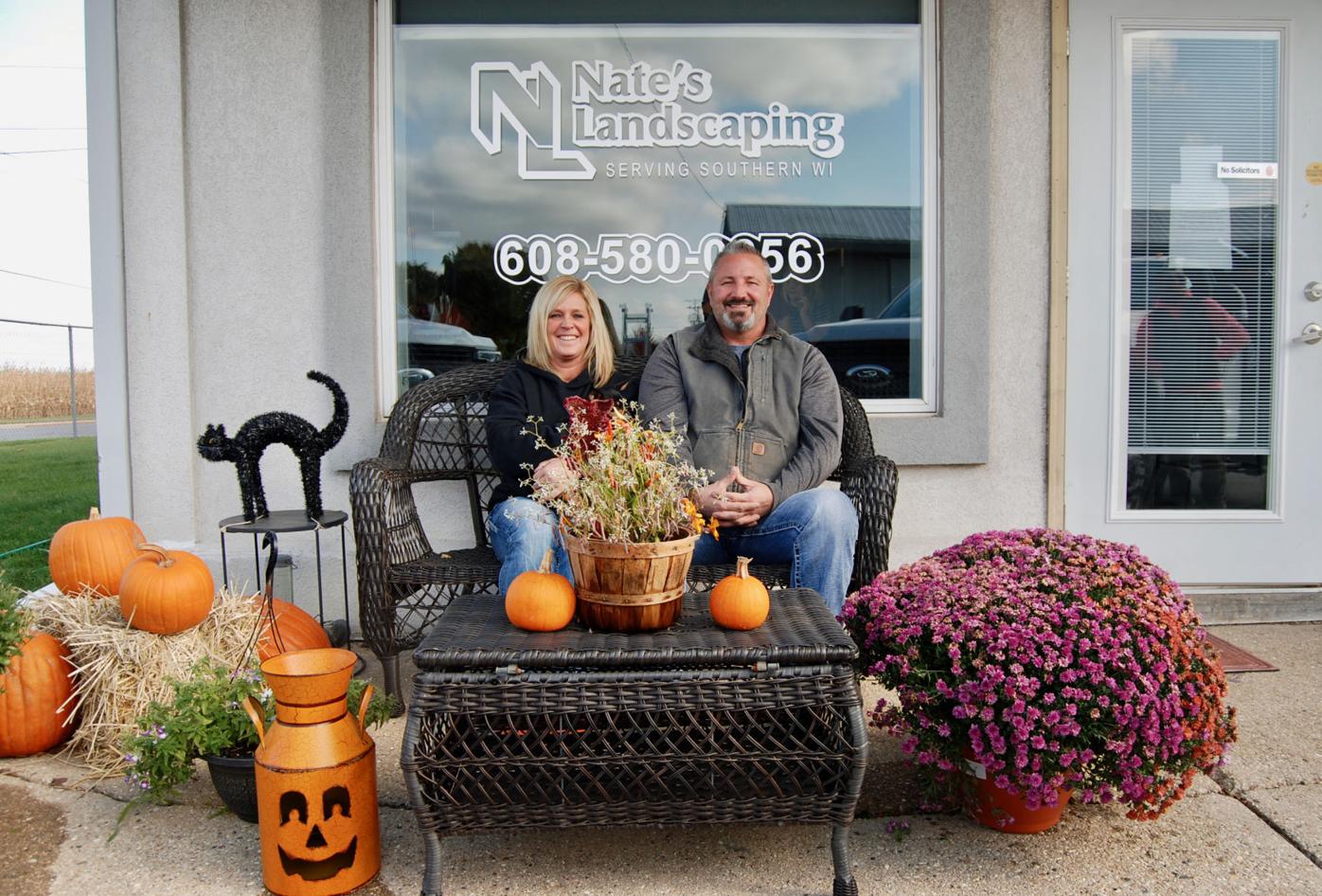 For Nate and Tonya Hrobsky, owners of Nate’s Landscaping, 939 Storrs Lake Road, finding their passion, and forming a family business, began with an act of compassion.

Shortly after the couple was married, they learned that a friend was diagnosed with terminal cancer. Looking to help during the transition, Nate and Tonya took care of the family’s yard.

At the time, Nate, a native of Fort Atkinson, said he was working in sales at a garbage disposal company. Tonya, a native of Beloit, had previously worked part-time at Beloit Health System as a medical assistant.

Neither imagined a career in landscaping, but, they said, they both enjoyed maintaining the grounds of their friend’s home.

“We just loved helping. It was a beautiful place and it had beautiful flowers,” Tonya said.

While they were helping their friend, Nate said, other people approached them about doing landscaping work. Side jobs blossomed into a sort of second job, he said.

“We took big pride in what we did. We were perfectionists. From there, the word got out,” Nate said.

Influenced by the experience, Nate made a career change: he went to work for a Janesville-based contractor who focused on landscaping and carpentry, he said.

In 2008, Nate said, he purchased the landscaping portion of the business, calling his new company Nate’s Lawn Care, operating it from the couple’s Janesville home. Tonya, at that time, was a stay-at-home mom, she said, and she began doing paperwork for the business part-time.

At the time of its purchase, Nate said, the business’s assets included two trucks, one employee and about 20 accounts.

Nate and the company’s employee began plowing customers with the two trucks and Tonya and Tanner Parkhurst, one of the couple’s two sons, then 10, began shoveling walkways, Tonya said.

Today, Tanner, 22, and the couple’s son, Hunter Hrobsky, 15, work for the family business.

In 2012, Nate said, they acquired a company that was leasing a shop on County Road F, Janesville, and began operating from that location that summer. The company operated from County Road F until Nate and Tonya purchased their current headquarters on Storrs Road. They moved to their new headquarters this summer.

The move to Milton

When the company moved to Milton, Nate said, it came with 16 employees and eight trucks.

His client list, too, has grown since 2010, he said, with about 60% of his clients seeking residential landscaping and about 40% looking for professional lawn care.

Employee dedication and work ethic are a big piece of the company’s success, the couple said.

“We hire the best of the best. They go to work loving their jobs just like we do,” Tonya said.

Tonya and Nate agreed, like them, their crews enjoy being outside and the diversity of Wisconsin weather.

In sun and snow, they said, they use “fun equipment.”

These days, Tonya said, she often drives the snow plow.

“I actually love it, being out at 2 or 3 in the morning when nobody else is out. I love working with our guys. They make the job easy and fun.”

Wisconsin winters that produce periods of freezing and thawing can be unforgiving, causing bulges and other imperfections in paver projects and retaining walls if not done the right way, Nate said.

“We may not be the cheapest, but it’s going to be done right,” he said, adding that the company has cultivated long-term relationships with its clients.

When looking to move, Nate said, Milton was a good choice because of its central location within the company’s service area, which runs from Fort Atkinson to Beloit.

In Milton, Nate said: “We love the tight-knit community. Everybody knows everybody. We love that hometown feeling.”

Before purchasing the property on Storrs Road, the couple said they looked at other properties in Milton.

“This property was perfect, as soon as I saw this one, I knew it was the one” Nate said.

The one-acre property has in the past been used by Munns Trucking and for storage, Nate said.

As the headquarters of Nate’s Landscaping, the 6,500-square-foot all-purpose building will be used to store equipment and the office will soon be remodeled to include showroom space, featuring the different types of products used by the company and photographs of completed projects, Nate said.

An outdoor living space will also be built to showcase the company’s work.

In the spring, the building will be getting a facade improvement, including paint, he added.

Shop cats “Diesel” and “Turbo,” or one of the family’s dogs: “Macey,” a 5-year-old black lab, and “Chica,” an 8-year-old Miniature Pinscher, help greet visitors.

The family invites community members to stop by with their landscaping ideas, get a free estimate or just say hello.

Nate said he likes serving as an industry resource. If he can’t do the work, he can make a good referral, he said.

Nate’s Landscaping hours are weekdays, 8 a.m. to 5 p.m., and crew members are also at the shop on weekends, “but we come and go,” Nate said.