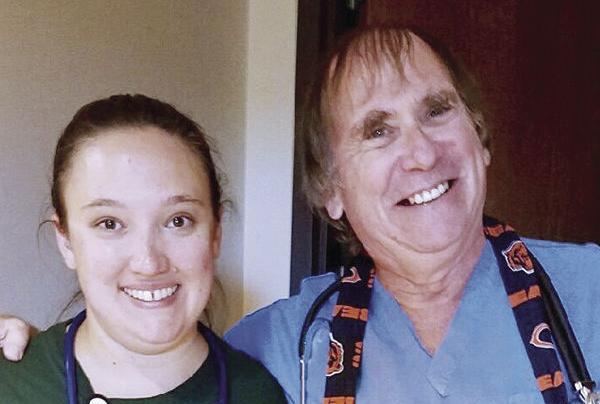 ICU nurse Amanda Drout, at left, and Dr. Frank Brodkey enjoy a break in the ICU at Mercyhealth, Janesville. Brodkey is wearing an apron made by one of his ICU patients who is also a relative of Drout. 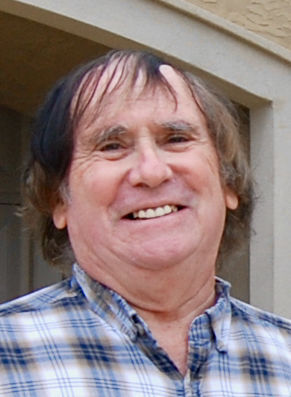 ICU nurse Amanda Drout, at left, and Dr. Frank Brodkey enjoy a break in the ICU at Mercyhealth, Janesville. Brodkey is wearing an apron made by one of his ICU patients who is also a relative of Drout.

Dr. Frank Brodkey, an ICU doctor at Mercyhealth Hospital in Janesville, stands on the frontline of the COVID-19 pandemic. The Milton resident was recently named Wisconsin’s First Congressional District’s Health Care Professional of the Year by Rep. Bryan Steil.

Brodkey — along with his partner, Dr. Muhammad Alkhan, and two hospitalists, Dr. Hyung Kim and Dr. Marlise Davidson-Fielder, and a team of nurses — has been working within an ICU specifically for COVID-19 patients since March. Brodkey has been practicing internal medicine as an ICU specialist at Mercyhealth in Janesville since 2009, he said.

At Mercyhealth, Brodkey said, he treats patients in two ICUs: those admitted to the regular ICU and those in the COVID-19 ICU, which was set up by the hospital during the early stages of the pandemic.

In the ICUs, Brodkey said, he sees the full spectrum of critically ill or traumatized patients.

Before COVID-19, he said, on average, he might treat 10 critical care patients each day.

Now, with COVID-19, three or four of those patients are in need of critical care due to the disease.

“I see mostly people with respiratory failure or pneumonia, or other complications from organ damage,” he said.

With COVID-19 patients, he said, some get better and go home and some get worse and move to ventilators.

“Those with respiratory failure go to ventilators and then they are followed by myself or one of my critical care colleagues.

“We have a team of hospitalists who are more or less dedicated to the COVID unit, so there is not a large number of doctors who see the patients who might spread the virus,” Brodkey said.

Of the patients that come to the COVID ward, about one third will need critical care, he said.

Brodkey said the 12-bed COVID-19 ICU is on a separate floor from the regular 17-bed ICU.

The COVID-19 ICU is an airborne isolation ward where it is safe to put COVID patients, he said.

When a patient comes to the hospital showing signs of distress from COVID-19, they are admitted to the ward. If they cannot be helped and sent home, they stay in their room and equipment, like a ventilator, is brought to them.

In the COVID unit, Brodkey said, there is one nurse for every two to three patents.

“The nursing staff is there all the time to answer questions and care for the patients. An ICU doctor, like myself or my partner, is there for the critically ill. Hospitalists make the rounds and we do, too,” he said.

How many are admitted, and who gets better?

Looking at the number of those admitted, Brodkey said: “It could be different tomorrow than it is today. I can testify that we are in a higher wave now.”

In March, he said, the ward admitted on average between six and seven patients.

“Then we went down and we had maybe three or four. In the last two to three weeks, it’s been full a lot of the time. That’s pretty significant for a city the size of Janesville,” he said.

“It’s pretty much the same here as what’s being quoted for the rest of the country. We have about a 40% mortality rate. Once patients are on a ventilator, it’s very serious,” he said.

Within the hospital, Brodkey said: “We are all working on patients together and with some degree of risk.”

About his own health, he said: “I don’t worry. I feel like myself and my partner, we signed up for this.”

There was similar worry in the late 1980s about taking care of HIV cases, he said.

Looking to the future, he said: “I’m going under the assumption that we will be dealing with COVID in similar magnitudes over the next full year, into next fall.”

While he looks forward with hopefulness towards therapies becoming available around the beginning of next year, he said: “We may not get a whole lot better between now and then.

“As an ICU doctor, I have to assume things will not be better until they do get better.”

He is hopeful, he said, that a vaccine that can be used on frontline healthcare workers will be available by the end of the year. Six to eight months later, he said, he hopes the vaccine will be made available to other high-risk groups and then the general population.

Said Brodkey: “There has been a lot of advancement in our knowledge of this condition. The prognosis has improved, but it is not as dramatic as what you hear from the media.

“The mortality rate in our ventilator patients is still in the 40% range. We know more, and hopefully that will translate to better outcomes, but we need better treatments and prophylactics.

“We are trying to prevent the mildly sick from going on the ventilator and I don’t think we are as successful at that as we’d like to be.”

COVID-19 patients in his care receive all the available approved treatments, Brodkey said, listing convalescent plasma therapy and drugs such as Remdesivir, and Dexamethasone, among them.

“They get antihistamines and blood thinners, too, but it’s a guess at how effective they are,” he said, adding, “We are learning every day.”

Working on the educational frontline, he said, as an editor of a subscription-based resource for health professionals called: “Practical Reviews in Critical Care Medicine,” he reads and writes summaries of medical literature on a variety of topics.

He has been a contributor to the platform for about two years. About eight months ago, he said, about two-thirds of the materials he summarizes became focused on COVID-19.

Brodkey said he summarizes about eight articles each month, many of which take him about three hours to review.

“I help other doctors learn about what best practices are,” he said, adding: “The problem with much of this is that it is not peer reviewed or published. It is just data, which is different from how we received information in the past.”

Information is sometimes released very quickly and spread through digital formats, he said, adding the practice can be good and bad.

“It’s good because you can get the data right away. With HIV, it took months to be published, but you lose peer review, and you may not be able to believe all the things you read. I’m reading with a skeptical eye; my job is to summarize if they (data) make sense to me as a practicing physician,” Brodkey said.

What can the public do?

“This COVID is really important stuff. It is as serious as what they tell us. We see people get better and we see people get worse and die and it leaves quite a mark on you after a while,” he said.

Offering advice to the public, he said, follow the guidelines from the public health authorities. Wear a mask, keep social distance, and wash your hands frequently.

“If you or a loved one is sick, and they come to you and ask you to take part in a clinical trial, do that. It may help you or the next guy.”

Who is Frank Brodkey?

Dr. Frank Brodkey is an ICU doctor at Mercyhealth Hospital, Janesville, and was recently rec…