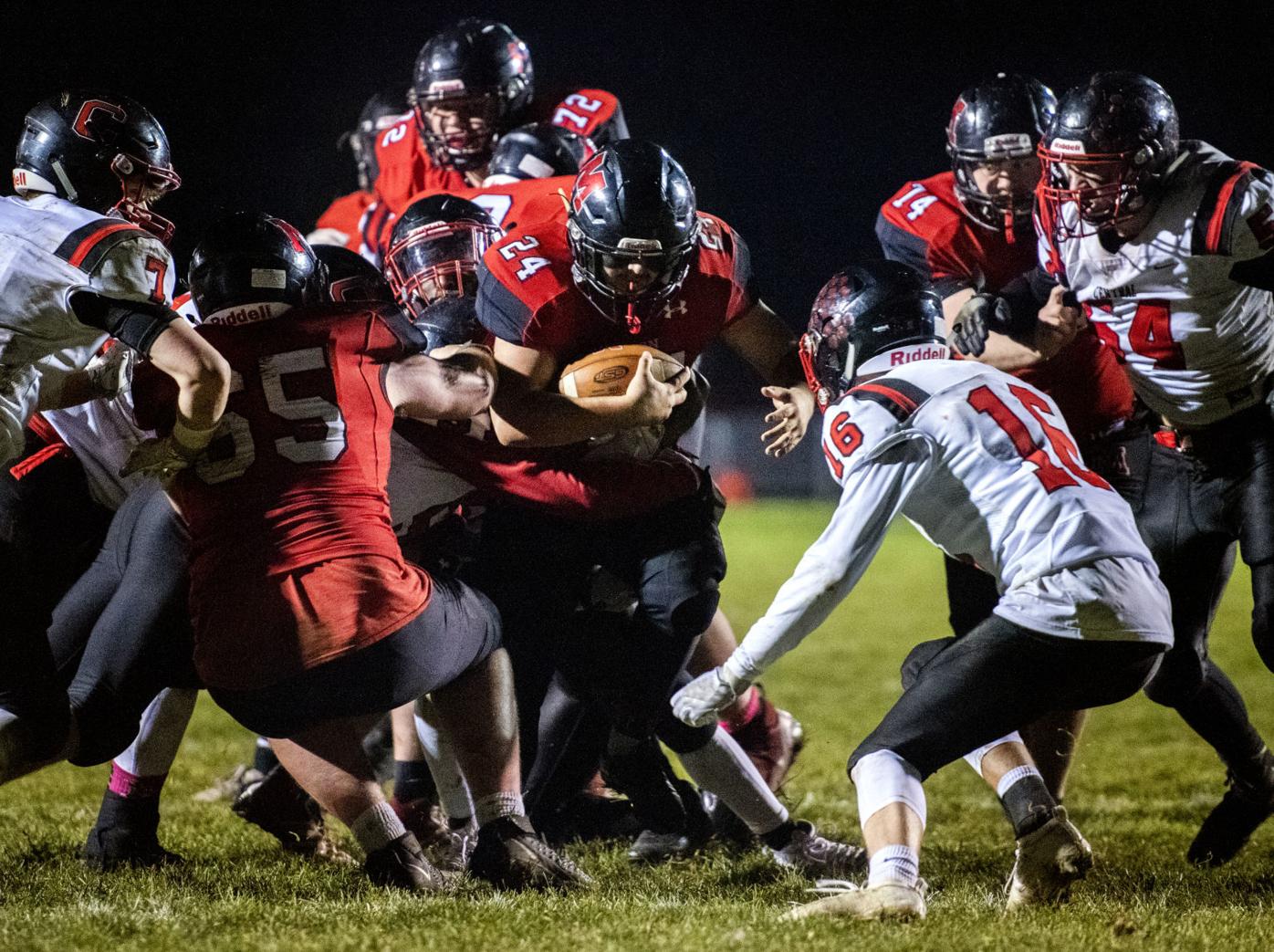 Jerry Jones (24) pushes forward for a first down at the end of the Red Hawks’ 36-33 first-round playoff win against La Crosse Central Oct. 25 at Milton High School. Jones finished the game with 143 yards on 15 carries. 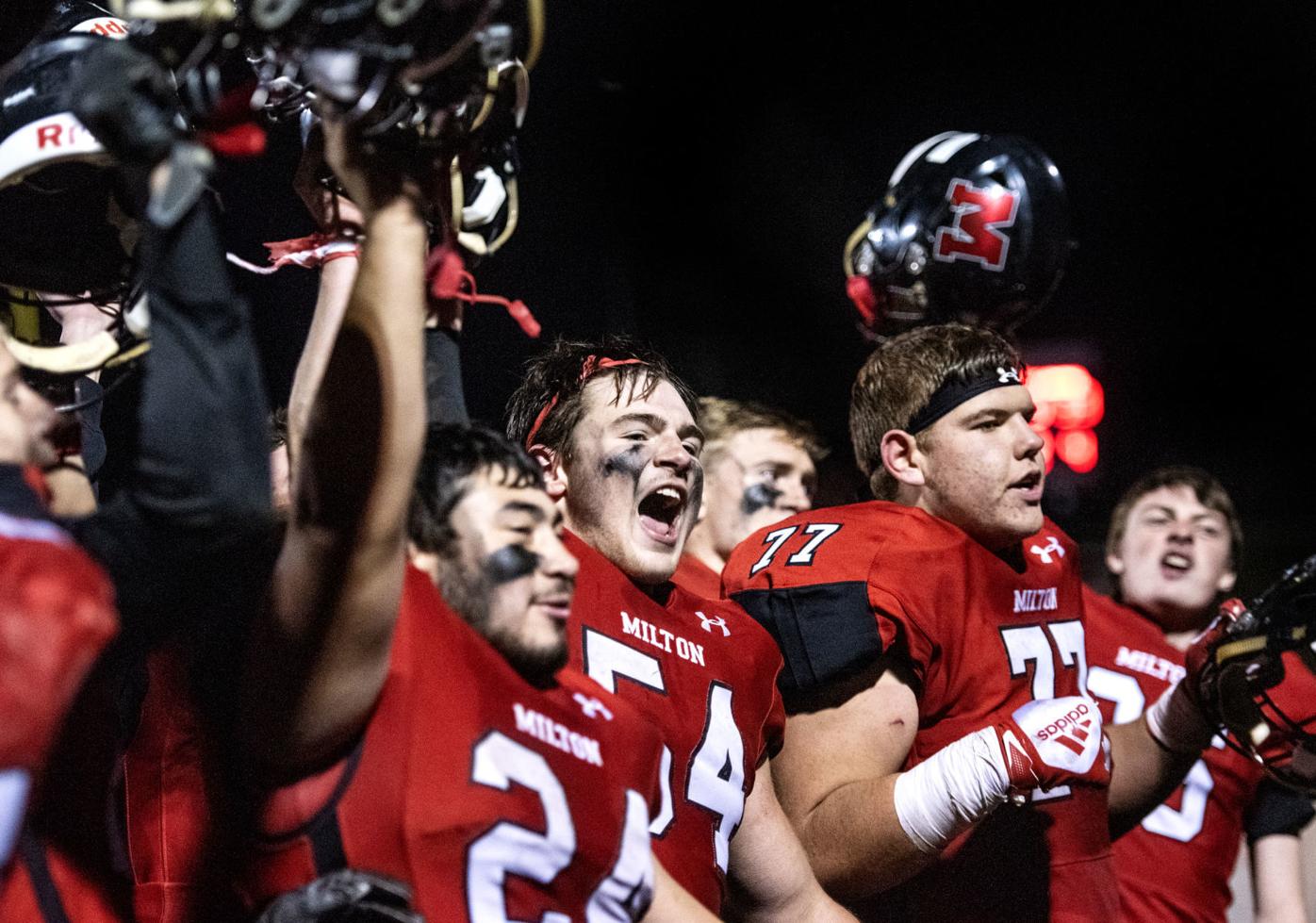 Jerry Jones (24) pushes forward for a first down at the end of the Red Hawks’ 36-33 first-round playoff win against La Crosse Central Oct. 25 at Milton High School. Jones finished the game with 143 yards on 15 carries.

When Milton’s football team wanted to set the tone Friday night, it turned to Nick Huber and Jerry Jones.

When it needed to add to its lead early in the second half, Huber and Jones got to work.

And when it came time to salt a playoff victory away by grinding out nearly six minutes of clock in the fourth quarter? You guessed it, the Red Hawks leaned on Huber, Jones and the road-grading offensive line in front of those senior running backs.

“We just want to play power-game football,” said Huber, who rushed 23 times for 171 yards and the Red Hawks’ first touchdown, just 80 seconds into the game.

“(Head coach) Rodney (Wedig) preached in the offseason that when we get to the playoffs, it’s power football,” said Jones, who carried 15 times for 143 yards and three scores and also caught a pair of passes for 20 yards. “We’re just blessed that he trusts us and that our O-line is just fantastic.”

Wedig, in his first year at Milton, has the Red Hawks at 9-1 heading into a second-round game at second-seeded Waunakee.

With star athlete Johnny Davis‑-a University of Wisconsin basketball commit--playing quarterback for La Crosse Central, Wedig and the Red Hawks hoped to play possession football and keep the ball out of Jones’ hands as much as possible.

The plan worked, for the most part, as Huber and Jones touched the football on 41 of Milton’s 53 offensive plays--two of which were kneel downs in victory formation.

“They (the Red Raiders) are very athletic ... even their defense, too, they were just faster than us,” Wedig said. “So we just said, we’ve got to run between the tackles and eat up clock.

“They (Huber and Jones) just ran so hard.”

The start of the second half and Milton’s final fourth-quarter drive were the difference.

After the teams traded three touchdowns apiece in the first half--with Milton holding a 21-20 lead at the break despite a pair of fumbles lost--the Red Hawks went to work.

The defense forced a punt on the first possession of the second half, and the offense turned right around and went the other way, with Jones scoring his second touchdown from two yards out.

Milton’s defense then forced a three-and-out, and the Red Hawks scored quickly on another Jones run. The ensuing two-point conversion, a run by Jordan Stivarius, made it 36-20 and wound up being a crucial play.

It was Peter Fleming’s rushing touchdown, though, with 3 seconds left in the third quarter, that made it 36-26. La Crosse Central went for two and failed, keeping it a two-possession game.

Davis scored his final touchdown with 5:53 remaining, but he never got a chance to receive another snap because of Jones and Huber. They had every carry on a drive that went from their own 24-yard line all the way down to the Red Raiders’ 3 before Milton was able to kneel and run out the clock.

“We were physically dominating them up front--just getting four or five yards up the middle and breaking tackles,” Jones said. “So I was like, we’ve got this.”