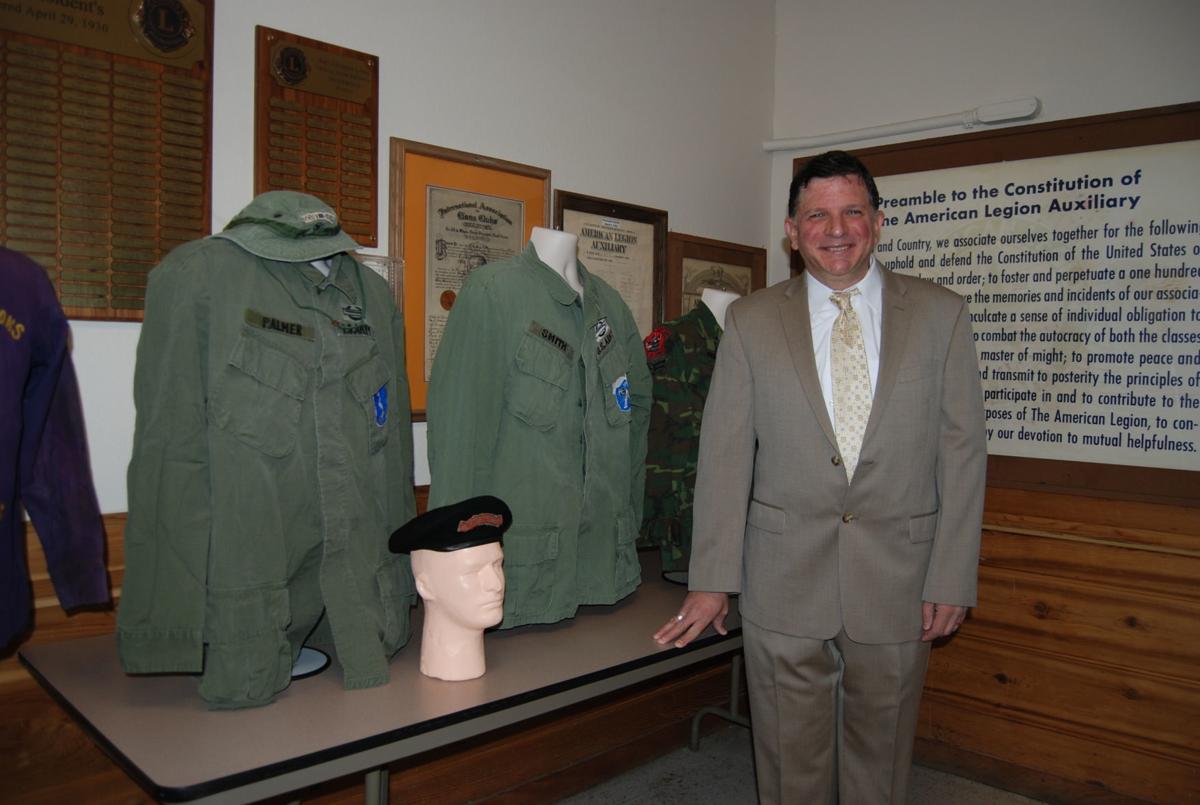 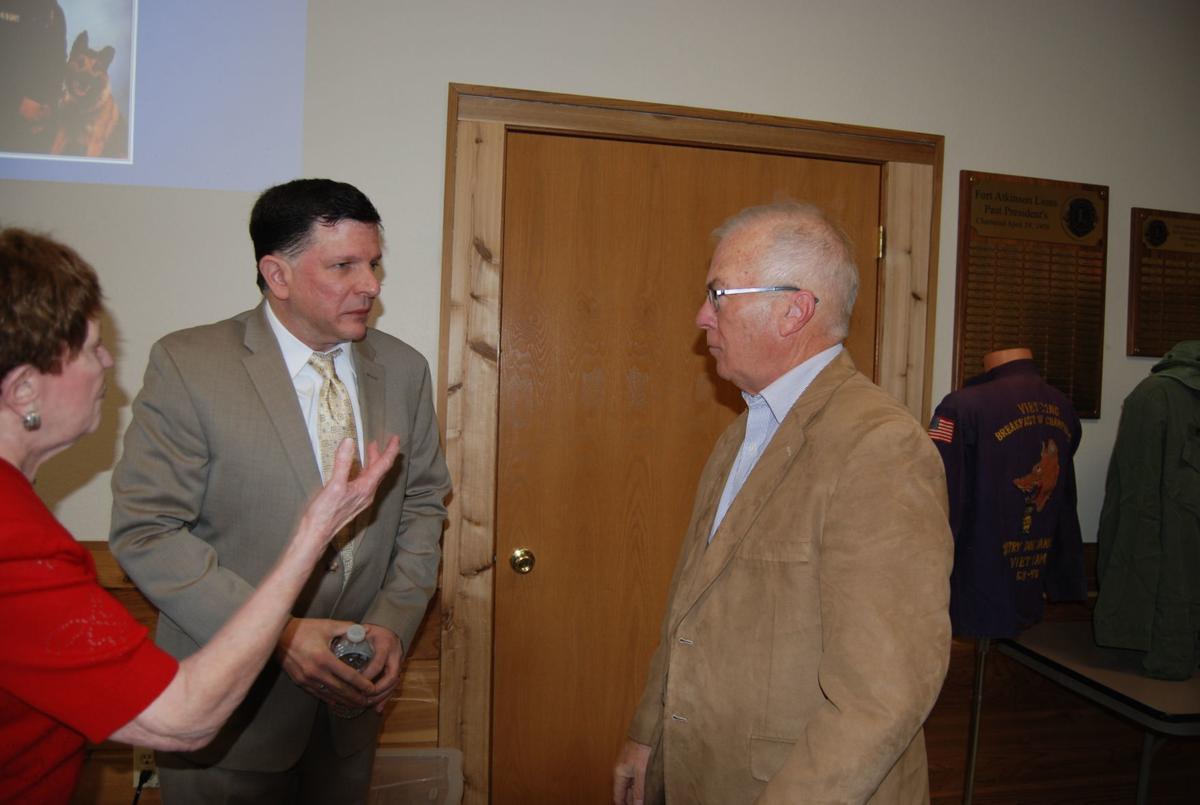 During the K-9 Veterans Day celebration held at the American Legion Post 166 Sunday, Jerry Witt — War Dogs Milwaukee member, veteran and Vietnam K-9 handler of two Army scout dogs, “Skip,” a German Shepherd/Collie mix who was killed in action, and “Satan,” a black lab — introduced his friend Ron Werneth, author and military historian, and past-historian of the Vietnam Dog Handlers Association, as a dedicated researcher who has been collecting stories from veterans for over 25 years.

“Ron has a passion for aviation history and realizes the importance of recording the stories and images of veterans before they are lost to time,” Witt said.

Witt said Werneth had made it “his personal mission to record and preserve the stories of World War II veterans, from all sides of the conflict,” noting a two-decade journey that included living in Japan for several years where he interviewed some of the last surviving Japanese World War II Navy pilots and aircraft mechanics.

“It was the first time for many to share their stories with English language readers,” Witt said.

In 2019, Witt said, Werneth published: “Fall of the Japanese Empire: Memories of the air war 1942-45,” compiling the narratives from the survivors of the Pacific war.

Werneth is a regular contributor to aviation journals, worldwide, and more recently to the Smithsonian Channel, Witt said.

Werneth is working on his third book, focusing his attention on the history of veteran K-9 handlers.

Werneth lives in Chicago, and was in Fort Atkinson for the dedication of the K-9 Memorial in 2017, Witt said.

In his comments, Werneth described himself as a military dog historian, but not a veteran.

“I care deeply about our K-9 veterans including law enforcement, volunteer and military,” he said.

He dedicated the celebration, in part, to “one of Fort Atkinson’s own fallen K-9 teams, US Marine Corps Lance Corporal Terry Beck and his canine partner ‘Seato.’ They were killed in combat on Dec. 20, 1967, in Vietnam. During the war, Lance Corporal Beck was just one of 294 dog handlers to sacrifice their lives on behalf of all of us. As for K-9 Seato, he was one of an estimated 3,800 dogs to serve in Vietnam, but only 232 canines transferred to non-stateside bases, while the others were killed in combat, euthanized or left in-country,” Werneth said.

He noted Gary Wolfram’s presence in the audience, calling it “an honor,” and citing Wolfram as Beck’s “best friend.”

“All told, for the Vietnam War, the K-9 teams that served are accredited with averting 10,000 casualties. This figure includes wounded and lives saved in combat,” Werneth said.

“Even with the state-of-the-art technology that we have there is no substitute for the nose, eyes and ears of a canine to detect lethal IED or an enemy on the battlefield.

“The symbiotic life and death existence between the K-9 handler and their dog creates a bond that can’t be put into words,” Werneth said.

He credited two events with helping to develop his passion for German shepherds and working dogs.

“As a young boy, I was pretty scared of German shepherds, but that all changed when my brother’s family welcomed a young pup,” Werneth said.

The dog was named “Ellie,” and when his brother traveled, he cared for the dog.

“I fell in love with that dog. I now have a passion for the breed that continues today,” he said.

A second influence was a book, titled: “Always Faithful,” by Dr. William Putney.

In the book, he said, a young Marine and K-9 handler was partnered with a Doberman named “Big Boy.”

One night in 1944, as Big Boy and his handler waited in a foxhole during World War II, during the Battle of Guam, Big Boy alerted several times. The dog was alerting to waves of Japanese defenders launching a suicide attack, Werneth said.

“That night, … Big Boy saved the lives of countless fellow Marines,” he said.

After reading the story, Werneth said, he was so moved that he vowed to meet World War II K-9 handlers. Remarkably, he said, he located the young Marine in the story and they became friends.

Werneth said the handler told him that even after the passing of 70 years, there was hardly a day when he didn’t think of Big Boy.

Describing his next project, Werneth said: “I’ve been interested now in working dogs and I especially love our Vietnam veterans. I think a lot of people maybe misunderstand who they are and their service. It’s important to me to document those stories before they are lost.”

He has interviewed Vietnam dog handlers for over the last 10 years, he said, adding that his next book will be developed from oral and photographic histories of the last survivors.

He has also spent some time learning more about Terry Beck, he said, and hopes to include his story in the book.

He and his family are dog lovers he said, adding: “They are truly gifts of God.”