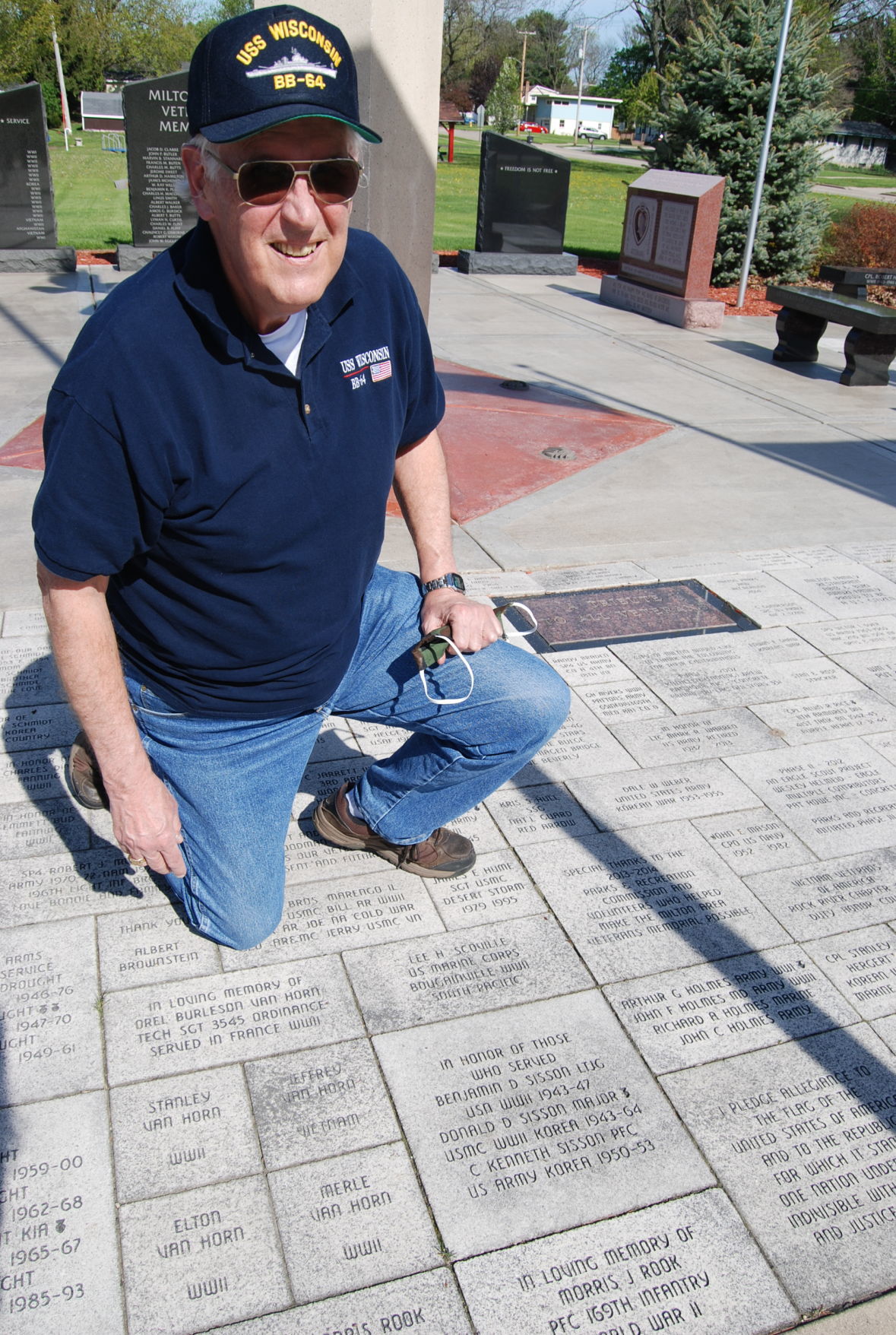 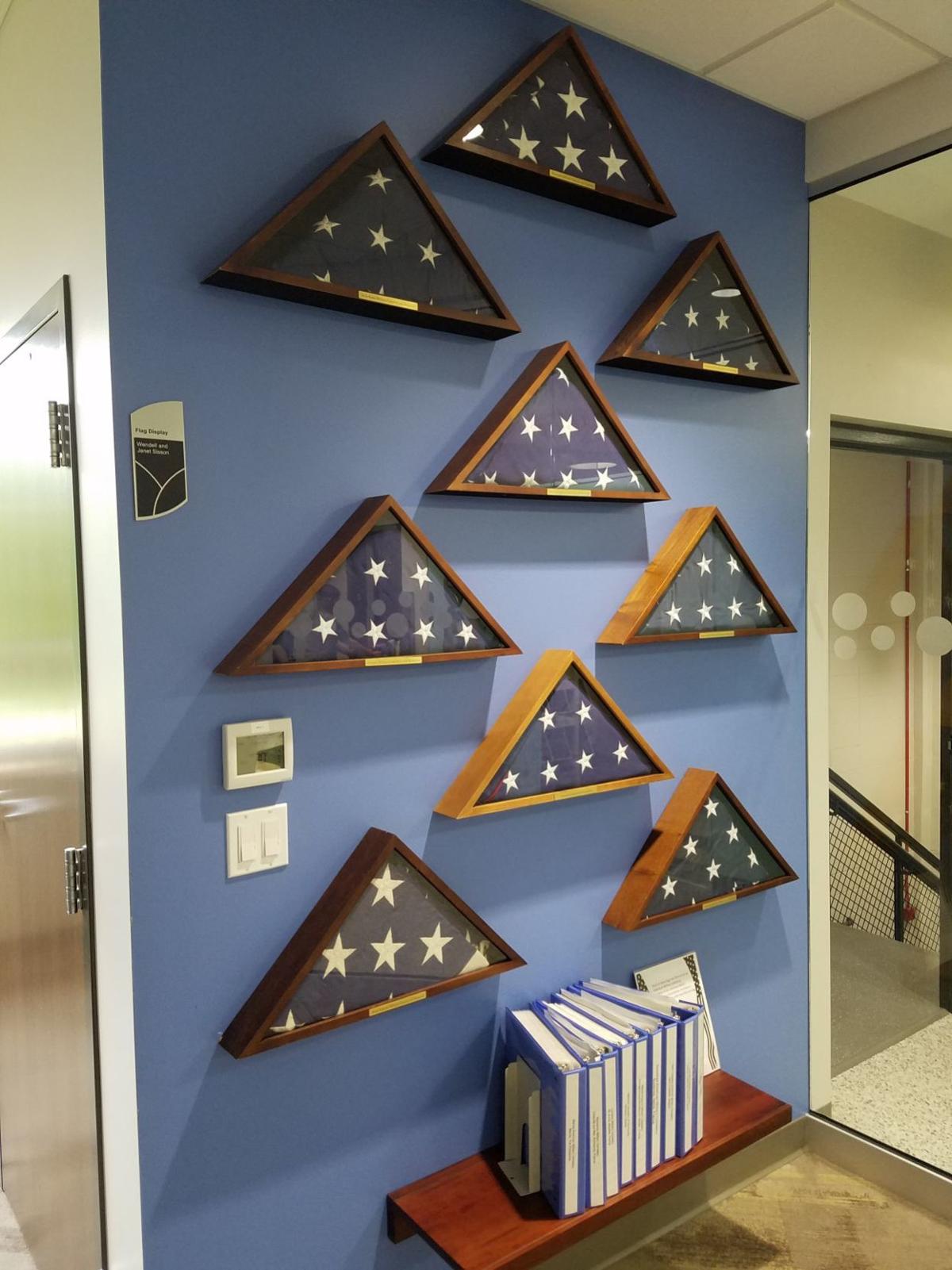 Housed on the second floor of the Milton Public Library, nine flags represent the locations of Milton World War I and World War II soldiers buried abroad. Each flag has been flown over the cemetery in which a Milton soldier is buried. Binders include information about the soldiers. The presentation was researched and created by retired history teacher and Milton resident Wes Sisson.

Housed on the second floor of the Milton Public Library, nine flags represent the locations of Milton World War I and World War II soldiers buried abroad. Each flag has been flown over the cemetery in which a Milton soldier is buried. Binders include information about the soldiers. The presentation was researched and created by retired history teacher and Milton resident Wes Sisson.

While there, Wes said: “I was able to wander the battlefields of World War I and World War II.

“Where we were living, we were about three hours from France and five hours from World War I battlefields. A 12-hour drive would get me to Normandy. We had a Volkswagen van, so we would head out and camp, and wander through the barbed wire and mud.”

Over the years, he said, he was moved by what he saw.

Said Wes of Normandy: “You can stand there near Omaha Beach — the Normandy American Military Cemetery is there on a bluff — and you can stand on the bluff overlooking the beach, and you have to wonder: How did these men do this?”

Omaha Beach was one of five sectors included in the Normandy landings when Allied forces invaded German-occupied France on June 6, 1944.

The 172-acre cemetery is the final resting place of 9,388 American soldiers, most of whom lost their lives during the Normandy invasion and other military operations during World War II.

“The beach is called ‘Bloody Omaha.’ That beach could have broken us,” Wes said.

Before moving to Europe, Wes said he was impressed by a movie, “The Longest Day,” released in 1962, which depicted military operations underway throughout various locations during D-Day. Characters in the movie were based on real-life soldiers, he said.

“One of the images of that movie that sticks with me is when (actor) Red Buttons’ parachute catches on the church steeple in Sainte Mere-Eglise,” Wes said. The town was a significant German-occupied outpost during the war and was situated along the road leading to Utah and Omaha beaches.

Paratroopers dropped in Normandy during the early morning hours on June 6 were mainly Americans, Wes said. In the movie, Red Buttons plays Pvt. John Steele, an American paratrooper, who finds himself hanging from the church steeple after a stray bomb starts a fire in the village square. Undetected by the Germans, Steele helplessly watches as fellow paratroopers, whose chutes were caught on trees in the village park, are detected and killed by the enemy.

Since then, Wes said, he has visited Sainte Mere-Eglise several times between 1975 and 2013.

From Milton to Germany

Wes moved with his family at the age of 9 to Milton from Green County in 1954, he said.

The youngest of eight children, seven boys and one girl, there was a 22-year spread between he and his oldest sibling.

Wes’ father worked for GM in Janesville, and two of his brothers attended Milton College, he said.

Several family members, including his mother, were teachers. Wes credits that, and a love of reading, with developing his interest in history.

Wes graduated from Milton Union High School in 1962, and attended UW-Platteville, earning a bachelor’s degree in broad field social studies with an emphasis in history in 1966. After graduation, he taught for a year in Johnson Creek.

He attended UW-Whitewater, earning a master’s degree in American history in 1968, and began teaching history and drivers education at Milton High School that same year.

In 1974, Wes and Janet, a first-grade teacher at Milton East and West elementary schools, were married, and in the summer of 1975, the couple went on a six-week backpacking excursion across Europe. They learned about a worldwide American school system, catering to American children living abroad, Wes said.

The couple began teaching in Heidelberg in 1978. Wes taught high school American history and Janet taught in the elementary school, Wes said. The couple remained in Germany until they retired, Wes in 2006, and Janet, in 2009.

Many of their students were children of those serving in the American military, Wes said.

“In Germany, they have what they call Volksmarsch, which translates to ‘people’s walk.’ Every weekend a community will host one on a Saturday or Sunday and they can range from 10 or 20 kilometers to 42 kilometers. They go through cemeteries and villages, and each has a monument to their veterans. They have inscriptions of names of men from that village who died,” Wes said.

Upon their retirement, the couple returned to Milton, and Wes reflected on the Volksmarsch tradition and the memorials he’d visited.

In 2010 or 2011, Wes said, he shared some thoughts about erecting a monument in Milton similar to those he’d seen in Europe with then-Milton Parks and Recreation Commissioner Don Vruwink. Soon after, discussions began and the idea gained momentum, Wes said.

“At the end of each war, families could leave them (soldiers) in the overseas cemetery or have them brought home and buried in a national cemetery or in their hometown cemeteries,” Wes said.

Manila American Cemetery, in the Philippines became of particular interest to Wes, he said, after learning that six Milton soldiers are buried there.

Eager to represent the soldiers at home, Wes, in 2010, began collecting information about the overseas burials and worked to obtain a flag that had been flown over each cemetery where Milton soldiers are buried, for display in the Milton Public Library.

The flags are on display on the second floor of the library along with binders holding information about Milton soldiers buried in each cemetery. The binders hold census records and other information obtained from the American Battle Monuments Commission, Wes said. The materials are available for public viewing.

A longtime member of the Milton Historical Society and the Milton College Preservation Society boards, Wes said researching history, and particularly military history, is for him, a work in progress. While he hopes no new names are added to the Milton veterans memorial, he remains on the lookout for names of soldiers that have yet to be identified, he said.

Veterans Park pavilion ‘reveal’ to be held May 25

With the Veterans Park pavilion, 440 Hilltop Drive, nearly completed, a drive-by “reveal” is scheduled for Memorial Day, May 25.

The names of five World War I soldiers are engraved on the granite memorial panels found in Milton’s Veterans Park. They are: Carroll B. West,…