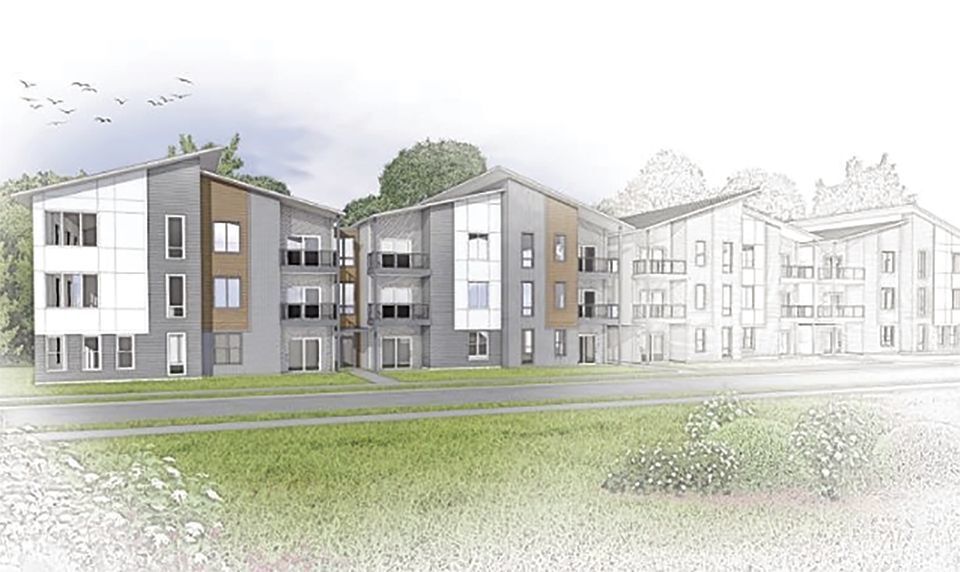 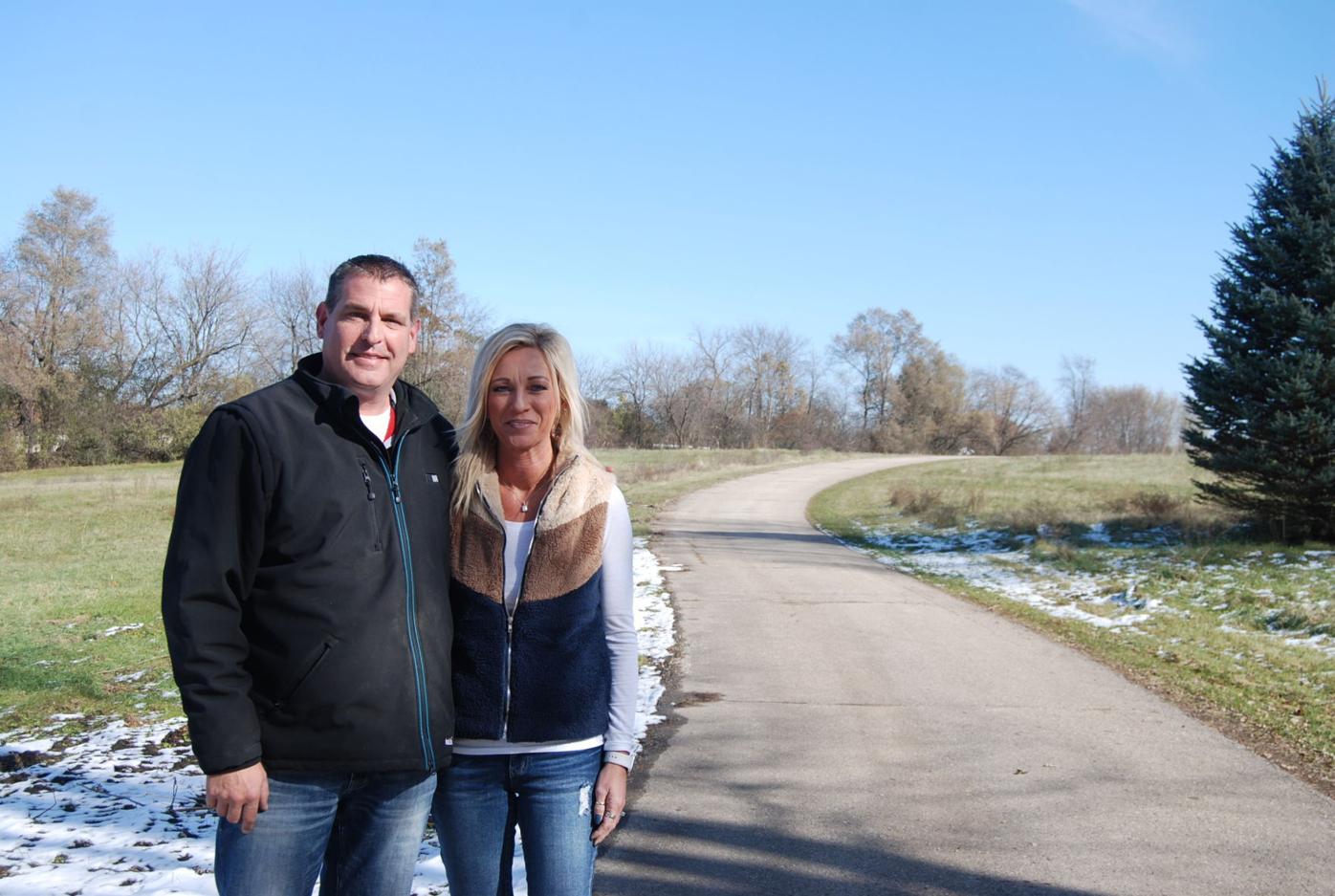 Matt and Candie Bonson of Milton-based Bonson Construction, LLC, stand on ground they plan to develop into single-family homes. The City of Milton Common Council recently approved a preliminary plat for the first phase of the proposed three-phase, 31-lot subdivision. The first phase includes development along N. Janesville street of 4.5 acres into 9 building lots. Approval of a final plat is required before construction can begin.

Matt and Candie Bonson of Milton-based Bonson Construction, LLC, stand on ground they plan to develop into single-family homes. The City of Milton Common Council recently approved a preliminary plat for the first phase of the proposed three-phase, 31-lot subdivision. The first phase includes development along N. Janesville street of 4.5 acres into 9 building lots. Approval of a final plat is required before construction can begin.

The City of Milton Common Council recently entered into a Tax Incremental Financing (TIF) agreement with Capital Asset Investments, LLC, for the sale of land at 1181 Gateway Drive to develop a fast food restaurant. The property, however, had already been sold as part of a TIF agreement with Midwest Tennis Center, LLC, in April of 2019.

Responding by email to questions from the Milton Courier, City Administrator Al Hulick noted that before an agreement for the land sale was made with Capital Asset, discussions were held with Midwest Tennis.

“They (Midwest Tennis) had indicated in the past that they are still interested in moving forward with the project, but at a lesser scope,” Hulick wrote.

The parcel initially sold to Midwest Tennis included nearly 6 acres, Hulick noted. Capital Asset had interest in 2.5 acres and Midwest Tennis indicated the revised scope of their project could be accomplished on a smaller site of 3.2 acres, he added.

“So all three entities (Capital Asset, Midwest Tennis and the city) felt comfortable moving forward with this,” Hulick wrote.

Among development projects approved by council in 2019, with construction plans anticipated for this year, several, including Midwest Tennis, are paused, Hulick said.

First steps for the proposed development of a 54,000-square-foot tennis center in Milton were taken in December of 2018, when Lake Geneva-based Midwest Tennis Center, LLC, gained approval for the purchase of 5.78 acres of land along Gateway Drive.

Responding recently by email, Hulick wrote: “If MWT (Midwest Tennis) chooses to move forward at some point in the future, they would require new approvals of their site plan, land purchase and TIF development agreement for the new, smaller sized project.”

In February, 2019, the city approved a rezoning proposal, changing the proposed Midwest Tennis site from M-2 to B-2, and a site plan for the center.

In April, 2019, council approved a TIF development agreement with the company, approving the sale of the land, valued at $202,300, for $1, and the company agreed to pay an annual minimum tax payment of $20,230, until the full value of the land was repaid to the city.

The property is located in TIF district No. 6.

At the time, the company said it would begin groundbreaking that spring.

In December of 2019, Hulick said the project was still approved and was expected to continue, although perhaps with some revised plans, in 2020.

Presenting in December of 2018 a preliminary overview of a two-phased development, including, within Phase 1, a 12,300-square-foot office building and, within Phase 2, a 49,350-square-foot warehouse and sorting facility, Badgerland Disposal, located on North Janesville Street, had plans, Hulick told the Milton Courier in December of 2019, to start development of the first phase in “early 2020.”

Responding recently by email to questions about the project’s status, Hulick wrote: “This project appears to be on hold.”

Given the amount of time that has elapsed, Hulick wrote, original approvals — including the company’s plans, and land purchase and TIF development agreements with the city — would need to be “reapproved by the Plan Commission and Common Council if they are to move forward.”

In 2018, plans initially called for the development to occur on 9.5 acres near the southeast corner of the intersection of State Highway 59 and County Trunk M.

In March of 2019, Badgerland Disposal instead opted to purchase a 13.8-acre lot at 1528 Putman Parkway and the Plan Commission approved the land sale and the company’s first-phase site plan.

In April of 2019, council approved a TIF development agreement for the project’s first phase, selling the 13.8-acre lot within TIF District No. 9, carrying a value of $200,000, to Badgerland for $1. In exchange, the company agreed to make an annual tax payment of $20,000 until the full value of the land was paid to the city.

The agreement stipulated that the first phase of the construction would be completed by the company “no later than the 31st day of December 2019, so that the increased real property valuation and assessment shall be included in the assessment and equalized valuation set on January 1, 2020.”

The agreement further states that the annual payment due to the city will begin in tax year 2020, payable in 2021.

The agreement requires the developer to construct 108 residential apartment units upon a portion of a 12.61-acre site owned by the developer and located along Parkview Drive. When the development is completed, the agreement stipulates that the property will have “a commensurate increased real property valuation and assessment” of not less than $12.6 million. In return, the city “is offering an annual TIF Development Incentive of $252,000 for 10 years, beginning Aug. 31, 2023,” Hulick wrote in a memo to council when the agreement was approved.

“The developer also agrees to complete construction of these facilities by March 31, 2021 as to establish the value on the tax rolls on January 1, 2022,” Hulick wrote.

Illinois-based Yost Enterprises has been identified as a co-developer working on the project.

In his recent email, Hulick wrote: “This project is on hold. Depending on when they may choose to move forward, they may not require new approvals … We have had contact with the developer periodically over the past few months, and they still intend to move forward, but due to the uncertainty in the marketplace right now, they aren’t sure when they may move forward.”

In November of 2019, council approved a preliminary plat map and development agreement for the first of a three-phased residential subdivision proposed by Milton-based Bonson Construction, LLC.

The company proposed to build a mix of single family and duplex homes on approximately 15 acres at 260 N. Janesville St.

The full three phases called for 31 building lots. The first phase called for nine lots with single-family homes to be built on 4.5 acres.

Last November, developer Matt Bonson said he hoped to return to the city with a final plat for approval in January of this year.

In his recent email, Hulick noted that while the city had given preliminary first phase approvals last year, the project has not yet received final approval. While the project appears to be on hold, Hulick wrote, it could continue moving forward as soon as it receives final approvals.