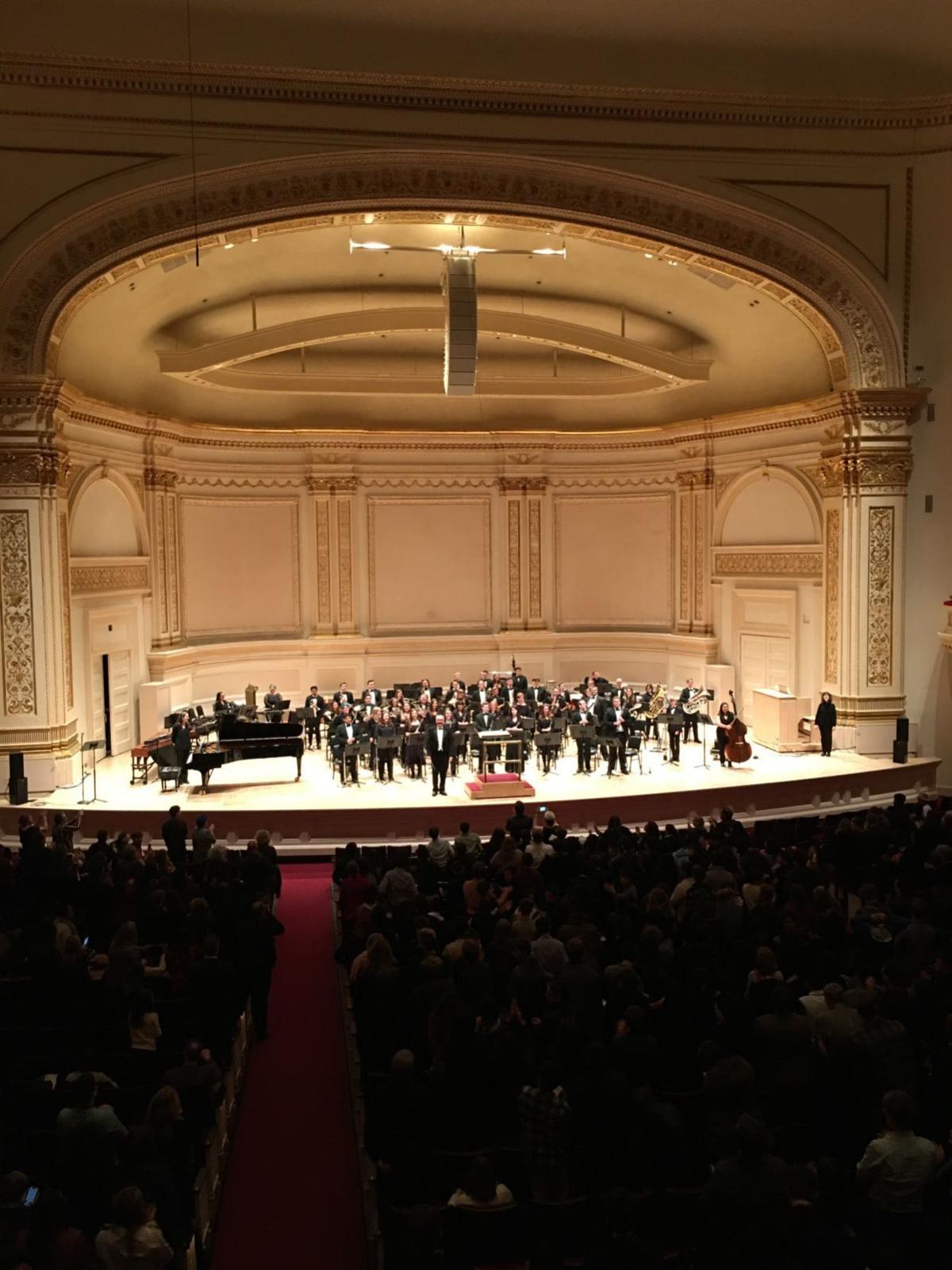 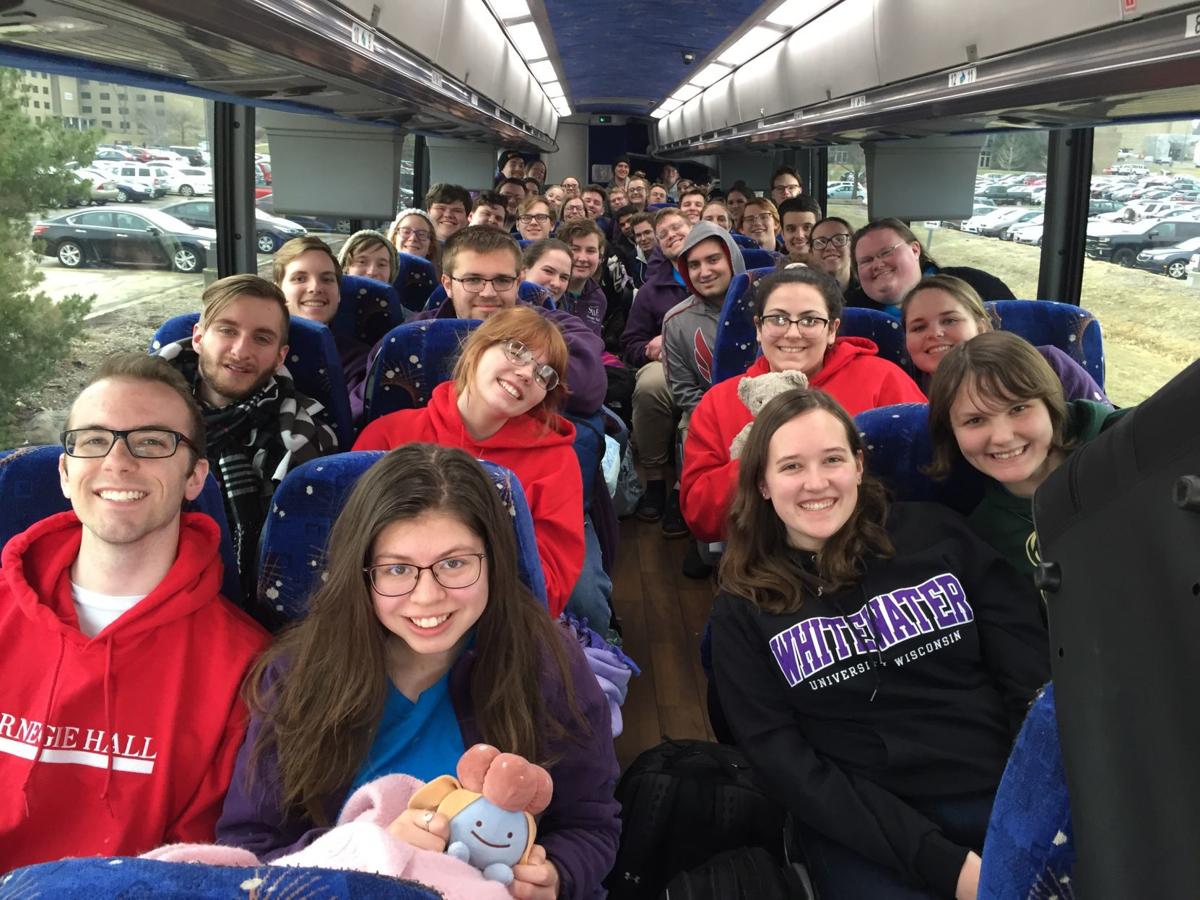 The UW-Whitewater Symphonic Wind Ensemble travels home from New York City. Arriving on campus on March 12, the group was met by health service officials ready to aid them as they prepared for a 14-day self-quarantine. Walworth County health officials requested the measure because the group had traveled to a high-risk area for COVID-19.

The UW-Whitewater Symphonic Wind Ensemble travels home from New York City. Arriving on campus on March 12, the group was met by health service officials ready to aid them as they prepared for a 14-day self-quarantine. Walworth County health officials requested the measure because the group had traveled to a high-risk area for COVID-19.

“I’ve never been to New York. It was a really big deal. It’s a really big deal for any musician to play at Carnegie Hall … it’s a legendary concert hall where classical music started in the United States,” said tenor trombone player Lucas Reisdorf, Rochester, Minn., a music and education major in his junior year at UW-Whitewater.

The concert was part of an annual, five-day festival, held this year March 7-11, and designed, according to its website, to present young musicians with an “experience that offers the opportunity for musical growth while creating lasting memories.”

According to its website, the festival is in its 19th year.

The UW-Whitewater Symphonic Wind Ensemble played at the festival for the first time in 2013, Hayes said. Bands must be invited to play, he added.

Becca Weber, an ensemble flautist and UW-Whitewater senior studying music education from Waterford, described the opportunity to play at Carnegie as “surreal,” and her audition in September as “so high stake.” The whole experience, she said, was “a dream come true.”

After the performance, while preparing Wednesday evening for the bus ride home, Hayes gathered students together, Reisdorf and Weber said, to deliver the news that, upon their return to campus, they would be met by a health services team and asked to self-quarantine themselves for 14 days because New York had been identified as a high-risk area for exposure to COVID-19.

Upon hearing the news, Reisdorf said: “In general, it was sadness, and really kind of annoying. There was a general feeling of: ‘this is going to suck, we just don’t know how much yet.’”

“A lot of people were surprised,” Weber said. Describing herself as a member of a family with a healthcare background, she said she understood that concerns about spreading COVID-19 had amplified while the group was in New York.

“Some students were concerned from an academic standpoint. They worried about staying on top of their coursework,” she said, adding, as a student teacher, she wasn’t as concerned about missing homework and quizzes.

It was the second time, she said, being a student teacher made her situation different from the rest of the group: earlier, as students prepared for the trip, clocking some 40 hours between September and March of rehearsal time, Weber said she worried about getting to campus for the scheduled twice-a-week rehearsals.

Weber described finding a balance between student teaching and rehearsals as “daunting,” but, she said, Hayes, whom students affectionately call “Doc,” steadied the student teachers in the group by telling them: “If you want to go, we’ll make it work.”

Aside from rehearsal time, Hayes said, students devoted many hours of their own time to practicing. Music chosen for the performance was in honor of the festival’s host city and each piece was emotionally charged, he said.

Describing the compositions, Hayes said: John Mackey’s “Asphalt Cocktail” is a gritty musical description of a scary taxi ride; Percy Grainger’s “Country Gardens” is an English folk tune; “diver[city],” composed by 34-year-old Emily Koh, a double bassist and assistant professor of composition at the University of Georgia’s Hugh Hodgson School of Music, offered master classes at UW-Whitewater this year, and performed with the ensemble at Carnegie; John Philip Sousa’s “New York Hippodrome March” was described by Hayes as: “our nod to the site where the Sousa band had their longest single-site performance run, and Alfred Reed’s “Russian Christmas Music,” featured the addition of an organ piece played at Carnegie by UW-Whitewater adjunct professor Sarah Reed Gehrenbeck.

For Koh and Gehrenbeck, Hayes said, these were debut performances at Carnegie.

During the Carnegie performance, Hayes said, the ensemble received a standing ovation after Asphalt Cocktail.

As the band performed Russian Christmas Music, Hayes said: “I will never forget looking into the students’ faces before we played … I could feel every soul on that stage working as one, and playing from their heart and soul. It was incredible music-making. It was an honor to be their conductor.”

Reisdorf, too described the experience, saying:  “Doc was inspirational. He told the band: ‘I wouldn’t have said we could play (at Carnegie) unless I thought this band could do it.’

“We all saw an opportunity to work hard.”

After intense practice and a March 1 concert performed in the Young Auditorium Reisdorf said: “I don’t think we could have felt more ready or prepared or excited to play."

Describing the music, he said all the pieces came with “crazy emotions.”

“The band as a whole, we were invested in those emotions,” he said.

At Carnegie, during the performance of Asphalt Cocktail, Reisdorf described the reaction of the trombone players, saying: “we were all just bobbing and jazzing out.

“The experience was exhilarating,” he said.

Recalling her thoughts as the bus left for New York, Weber said: “we were eager. There was excitement; we couldn’t wait to get out there.

“The night of the concert I was so nervous, but once we were on stage, it was like, ok, we have this.”

After performing Asphalt Cocktail, Weber said, she thought: “holy cow, we actually did this and we did it well.”

After Russian Christmas Music, “because of the sheer power of it,” she said, “it brought a lot of emotion. At the end, our entire flute section was in tears. It was a wave of emotion right at the finish. It was really cool.”

After the performance, she said, she was honored in her role as lead flautist and concertmaster when the festival artistic director William V. Johnson gave her a bouquet of flowers given to him during the festival.

Upon the ensemble’s return, on Thursday, March 12, the Walworth County Public Health Department, having identified New York as a high-risk location for contracting COVID-19, requested that the group of 55, including ensemble members and two members of the UW-Whitewater administration, voluntarily self-quarantine.

Members of the group complied with the request, the UW-Whitewater Media and Communications Department announced in a statement released Wednesday, March 11.

The self-quarantine is for 14 days, the announcement stated.

Students were picked up by family members and taken home, the announcement stated. One student was identified as needing housing and care for three days, university-supplied information continued, noting that a quarantine room had been established along with care provided by UW-Whitewater for the specified time.

Hayes, who is among those choosing to self-quarantine, said while traveling home on the bus, no one showed signs of COVID-19-related illness.  One student had motion sickness from the bus ride, he said.

The group left New York just as Gov. Andrew Cuomo announced on March 12 a new ban on public gatherings. The ban applies to most venues within the state where more than 500 people can gather. The ban closed several venues, including Carnegie Hall, Broadway, the Metropolitan Museum of Art, the Guggenheim, the Metropolitan Opera, and the New York Philharmonic, among others, effective Thursday for Broadway and Friday, March 13, for other venues. The ban will stay in effect until at least the week of April 13, according to national media accounts.

In Whitewater, the university initially told its students it would remain open, and had scheduled spring break to run from March 23-27, but on Thursday, March 12, it announced spring break would begin early, on March 14, running through March 29, after which time classes will continue online until at least April 17.

Hayes praised campus officials for their handling of the students as they returned home to quarantine.

Students were each presented with a boxed lunch and bag of items including instructions about how to self-quarantine, a thermometer, hand sanitizer and other helpful items, he said.

According to Hayes, health professionals meeting the bus “were incredibly professional and compassionate and they handled the whole thing with high quality care.”

Of the ensemble members, Hayes said: “We understood this is the world right now and we are glad to do our part. As they (students) left the bus, I said: Some people just want to talk about COVID-19. Let them, and then start talking about the thrill of Carnegie Hall.”

Said Reisdorf: “When we arrived, they gave us a facemask, lunch, they were really nice. They had facemasks on. For how crappy a situation it was, it was low-key, and I felt cared for.

“Before we left, Doc said: ‘don’t let it ruin what we did as an ensemble.' We didn’t let this badger us down.

“Being quarantined, it kind of stinks, but I know it’s a good precaution,” Reisdorf said, adding he has since learned from friends that other universities and schools are facing similar closures, extended spring breaks, self-quarantines and future online classes like Whitewater.

In response to Carnegie’s recent closing, he said: “I feel extremely blessed that we got to perform.”

Even with the quarantine, he said: "I would have taken this over not going at all a million times. Going to perform and experience New York, I feel very lucky. We didn’t miss a beat, we got out just in time.”

Weber said she would use her time in quarantine to work on a student teaching portfolio.

Of the Carnegie Hall experience followed by quarantine, she said: “I don’t think anything could detract from the experience we had out there. We put Whitewater’s name on the map for a lot of the country. The trip was awesome in itself and that’s what we’re focusing on.”