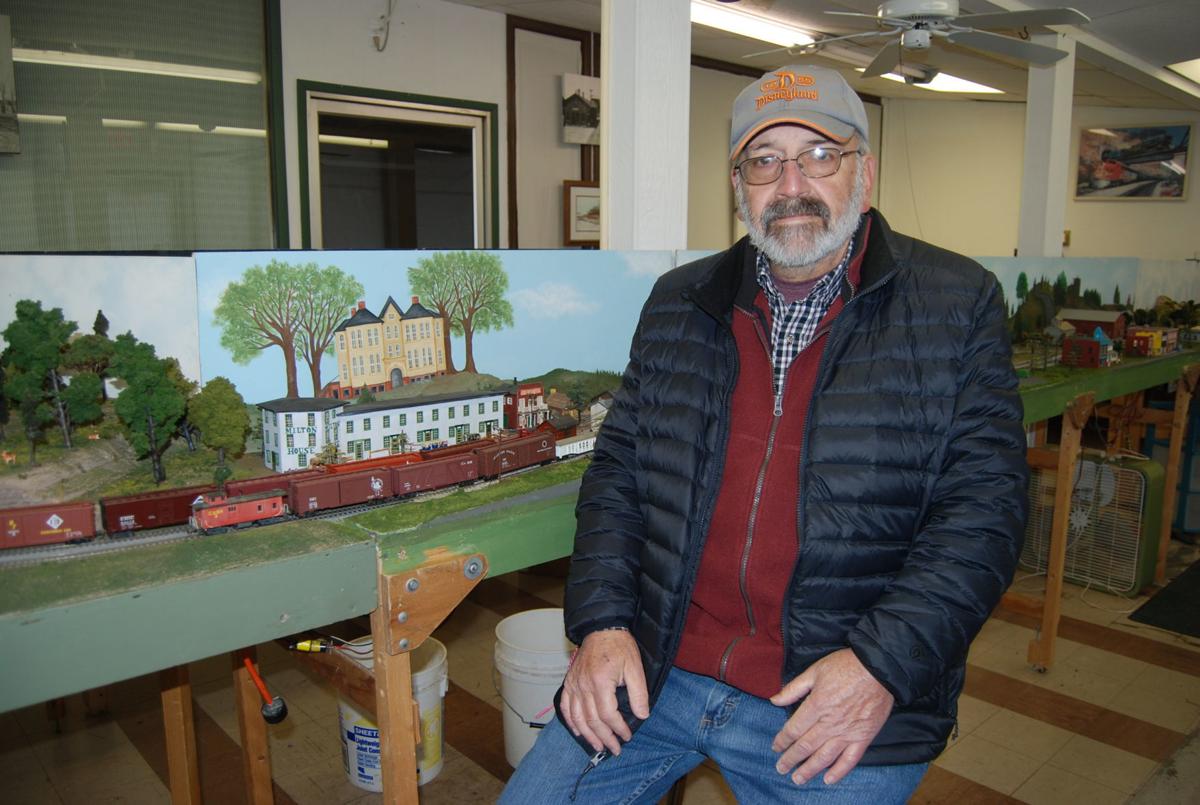 Longtime member of the Wisconsin and Illinois HO Modular Railroad Group Bill Hueser sits beside the village of Milton module housed in an auxiliary building at the Milton House. He, like all the members of the group, is a member of the Milton Historical Society. 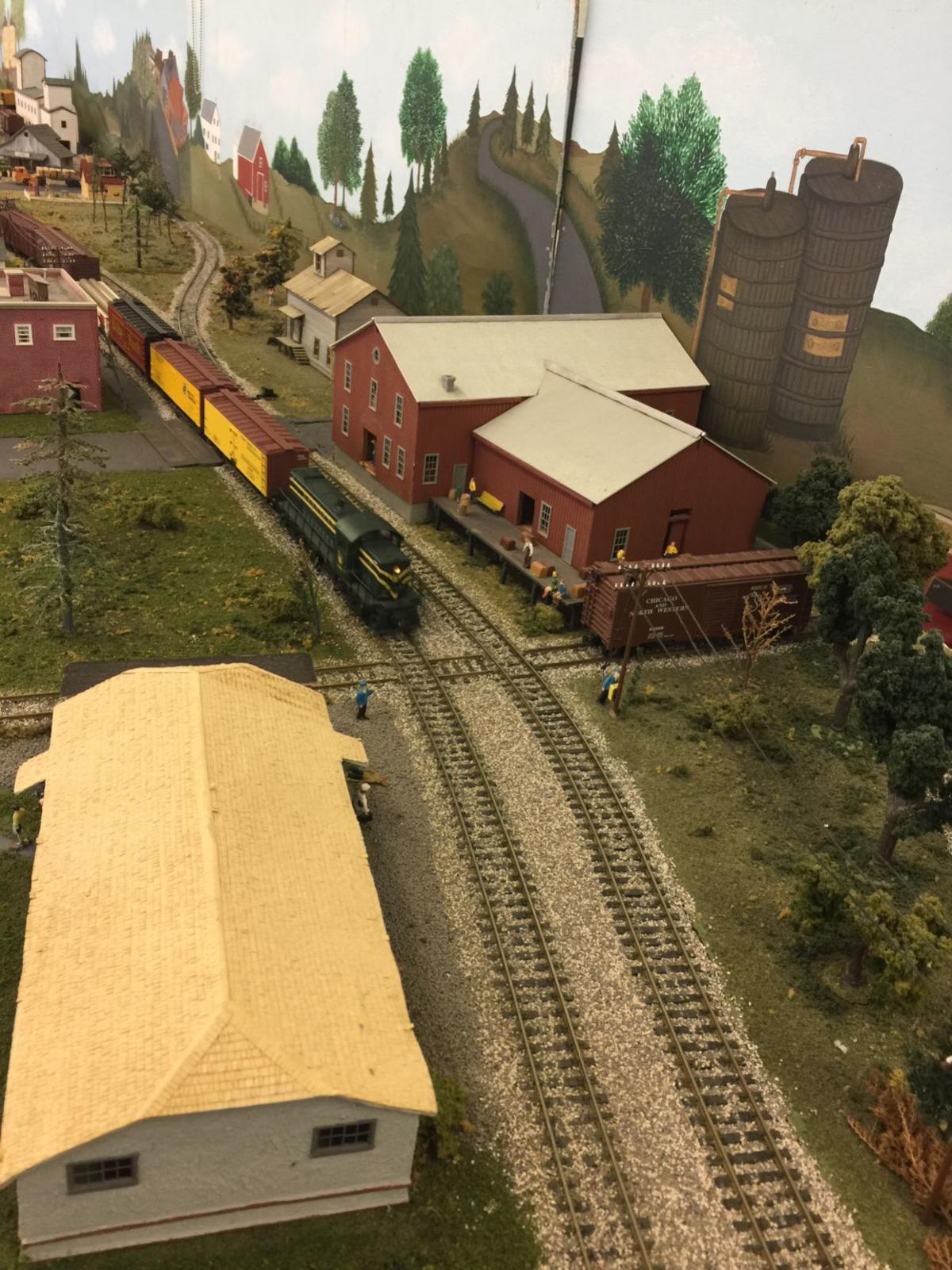 Leaving the Milton module, the train rolls into Milton Junction.

Longtime member of the Wisconsin and Illinois HO Modular Railroad Group Bill Hueser sits beside the village of Milton module housed in an auxiliary building at the Milton House. He, like all the members of the group, is a member of the Milton Historical Society.

Leaving the Milton module, the train rolls into Milton Junction.

“For a long time, my ring tone was Ossy’s ‘Crazy Train’ just because he yelled out ‘All aboard’ in the beginning,” said Bill Hueser, a Janesville resident and 23-year veteran of the Milton-based Wisconsin and Illinois HO Modular Railroad Group. The 12-member club meets and runs model trains in an auxiliary building at the Milton House. Members come from Milton, Janesville, Beloit and Rockford, he said.

Hueser, 68, said he, like many of his contemporaries, got his first set of Lionel trains in his youth as a Christmas gift, but, for him, the tradition of running a train under the Christmas tree didn’t begin until after he had kids of his own.

Two years ago, he took a hiatus from trains under the tree, waiting for his grandkids to “get past the crawling stage,” he said. Perhaps this year, or maybe next, he will resume the activity with one of three G scale models (with cars similar in size to a shoebox), he said. Among his choices is a replica of the monorail at Disneyland, featuring Mickey Mouse as the engineer, Donald Duck shoveling coal as fireman, and Goofy as the conductor, he said.

A native of New Jersey and member of the Milton Historical Society, Hueser knows his train history. Trains also run in his family: his grandfather arrived in New Jersey from Italy in the early 1900s and worked for the railroad, first as a fireman and then as a machinist. As a railroad employee, he had a pass to ride the trains and often took Hueser along, he said.

Children and adults alike find fascination with trains, said Wisconsin native Jeffrey Bloohm. He has been a member of the Mid-Continent Railway Museum in North Freedom for 38 years, serving twice as the educational nonprofit organization’s president, totaling 23 years. The museum is the home of the Santa Express, he said.

Trains have a long history even as toys, Bloohm said, describing early hand-painted models carved from wood, and powered by the kids themselves, as they pulled them around circular tracks. Later, metal replaced wood and cars were propelled using windup mechanisms. By the 1940s, electric models arrived. Marx, Lionel and Gilbert were the “big three,” he said, making a full range of scales, from TT, which he described as very small, to Garden Trains, which are large enough for a person to ride.

“I grew up in the 50s when trains were still pulled by steam,” Bloohm said. Before there was a developed highway system, the trains brought family members home for Christmas, he said.

Back in New Jersey, Hueser said, while he has fond memories of riding trains with his grandfather, it was his wife, Susan, who stoked his interest in model trains.

One Christmas, as the couple shopped, Hueser said, he noticed an 18-inch circle of track with a locomotive, two boxcars and caboose.

That Christmas, Susan presented him with the small set as a gift, and mostly as a joke, he said, but a few days later, he found a sale and augmented the humble start with enough equipment to set up a system in his father’s attic. Finding space to set up and run model trains is of common concern among hobbyists, Hueser said.

A GM employee while in New Jersey, in 1995, Hueser said, he accepting a company transfer, and he, Susan, and their three children moved to Janesville.

While in New Jersey, he was a “lone wolf” in his hobby, he said, but soon after moving, he stumbled across the HO modular railroad group.

The group has a set of traveling modules, which Hueser described as 2- by 4-foot panels with fixed scenery and track, and gives three model train demonstrations at locations other than the Milton House annually. In 1996, he said, he met the group at the Hedberg Public Library in Janesville and joined a year later.

“We speak the same language,” he said.

Using model train vernacular, gauges denote the size of the track, while scales describe the relationship between the size of the model and its full-sized prototype, Hueser said, and while his gift from Susan was N scale, over time, he developed an appreciation for the slightly larger HO scale, named for being half the size of O scale, he said. He likes the way the models operate and enjoys making the scenery, painting and decaling cars, manipulating components to make trains run smoothly, and switching cars and locomotives as they operate between main and secondary tracks, he said. Today his HO collection includes 85 locomotives and 400 freight and passenger cars.

The HO club requires its members also to become members of the Milton Historical Society, and trains and railroad history run deep in Milton, Hueser said.

Ten years ago, club member and Milton resident Phil Watson learned there was space available in the warehouse building at the Milton House as well as an eagerness to fill it, Hueser said.

The group began building stationary modules and running trains in the space. Modules have changed over the years as parts wear out or require maintenance, he said, adding that most of the modules today are only about a year old.

Modules used in traveling demonstrations are about 25 years old, he said.

Modules set up at the Milton House create some 48 linear feet of scenery with two mainline tracks. Tracks carry trains through scenes depicting Milton and Milton Junction circa 1913, a farmstead circa 1930, and a generic town, which could be anywhere in the Midwest or on the East Coast from 1920 to present day, Hueser said.

The traveling set features 60 linear feet of modular space with two mainline tracks. The scenery is mostly generic, he said.

On modules depicting real-life communities like Milton, scenic components, such as buildings, are made to scale, but placement is not always accurate because each module is only 2 feet wide, Hueser said. A tactic called selective compression is employed to utilize space.

Club members operate the Milton House modules on the third Saturday during the months of June, July and August, and during “major events” held at the Milton House, Hueser said.

To learn more about the club, visit the website: wisillrr.weebly.com.

The club will be hosting a railroad slideshow at the Hedberg Public Library, 316 S. Main St., Janesville, Tuesday, Jan. 14, at 6 p.m.

The club’s traveling modules can be seen in action at these events: