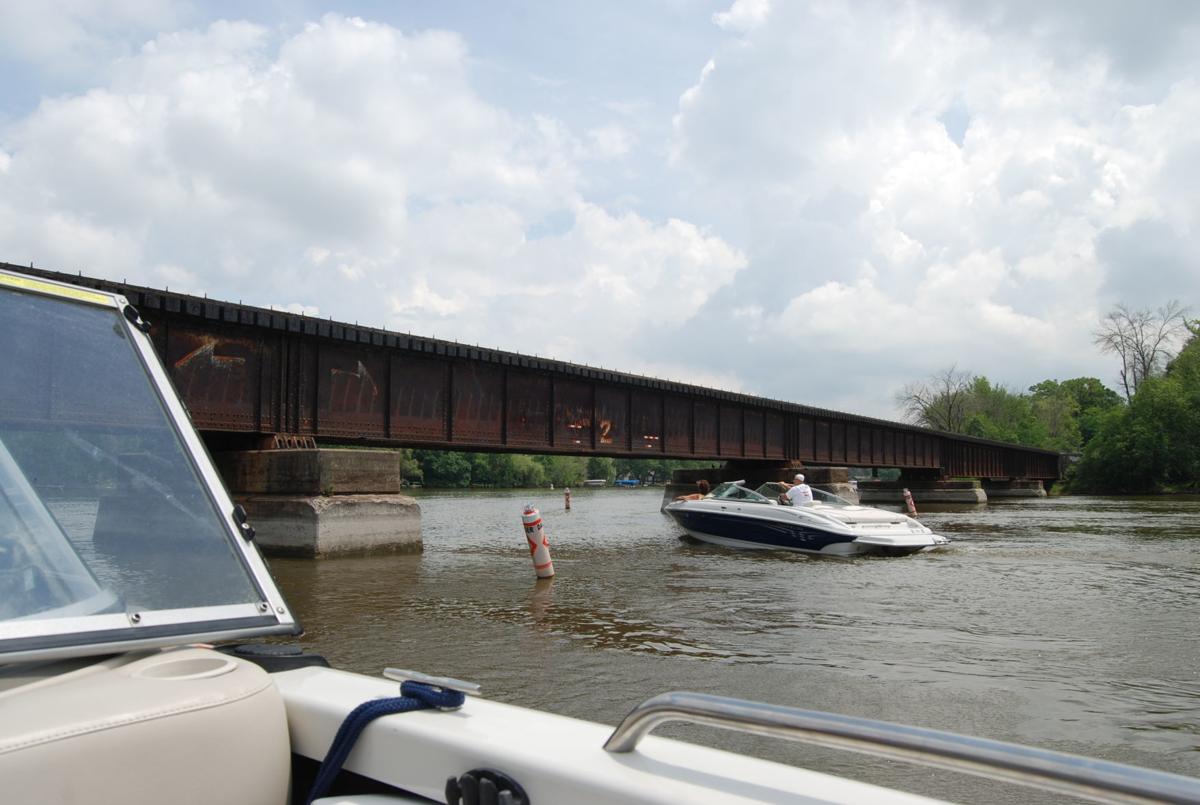 A boat traveling downriver, from Newville toward Indianford, passes underneath the Edgerton railroad bridge. 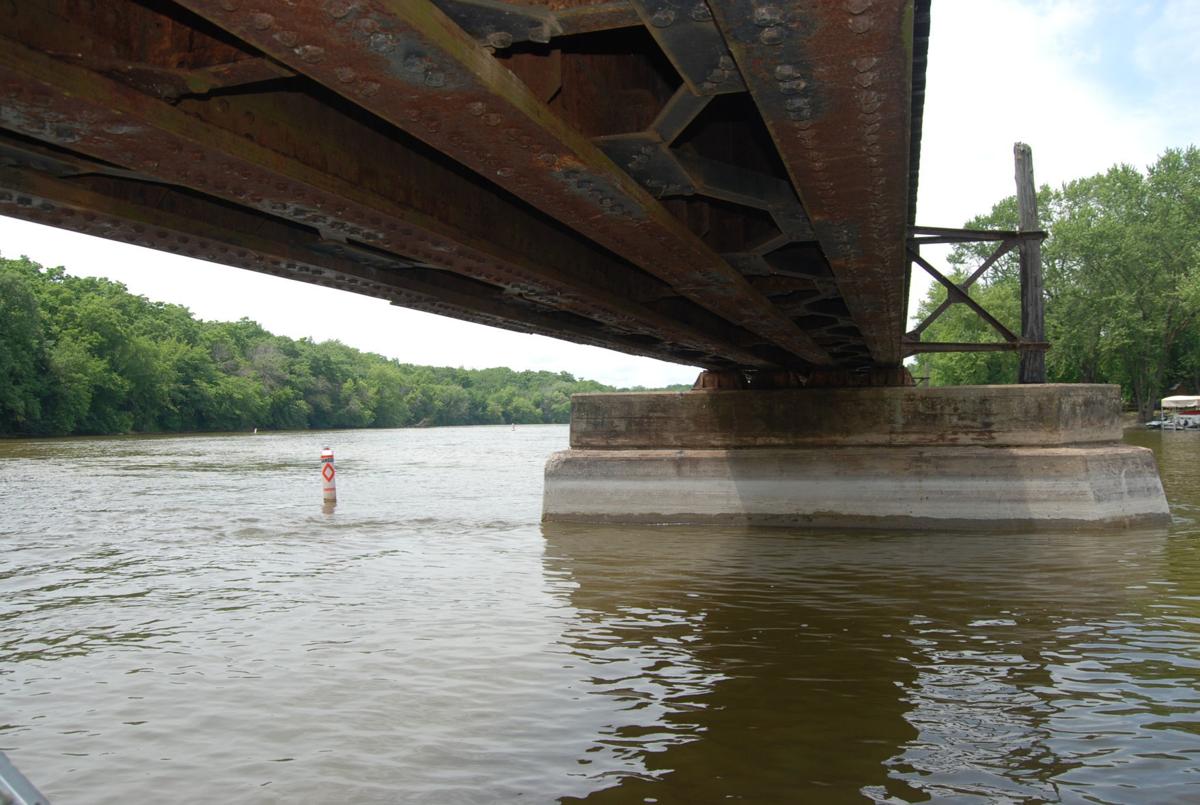 A view of the Edgerton railroad bridge while passing underneath. 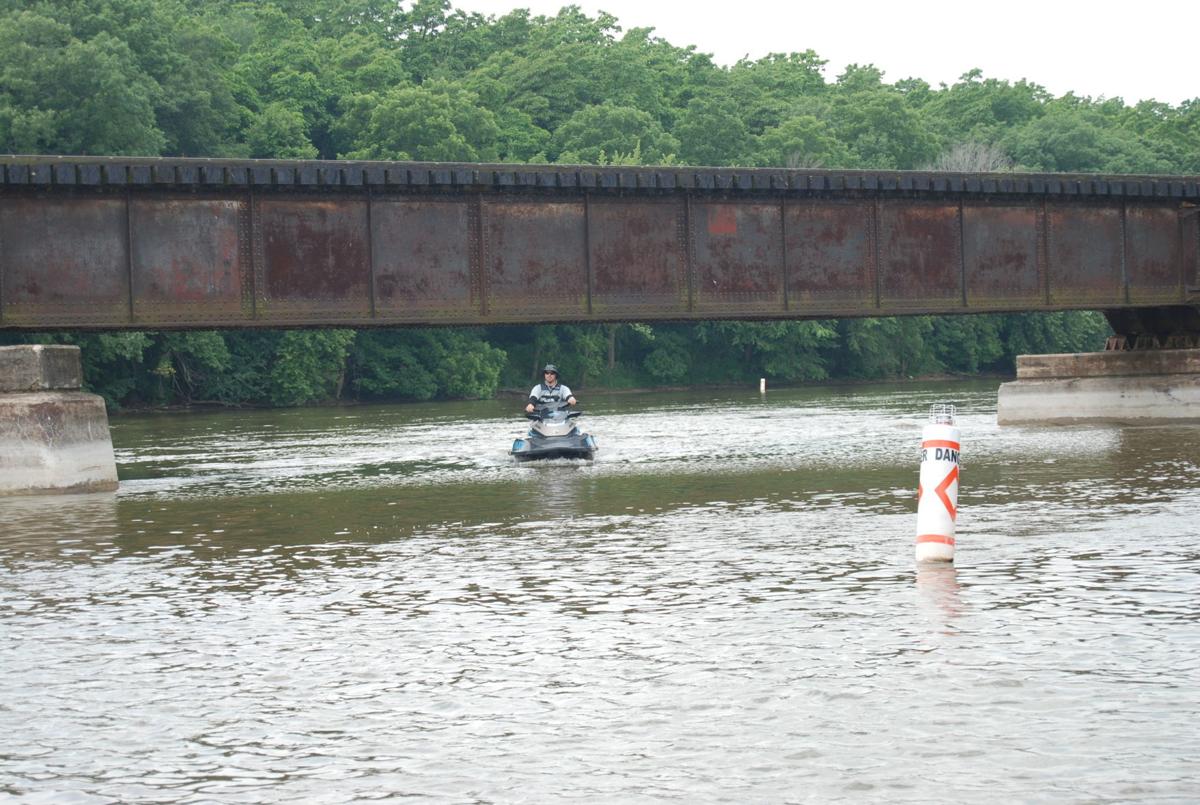 Officer Mike Herman of the Rock River Safety Patrol aboard a personal water craft (PWC) travels underneath the bridge. 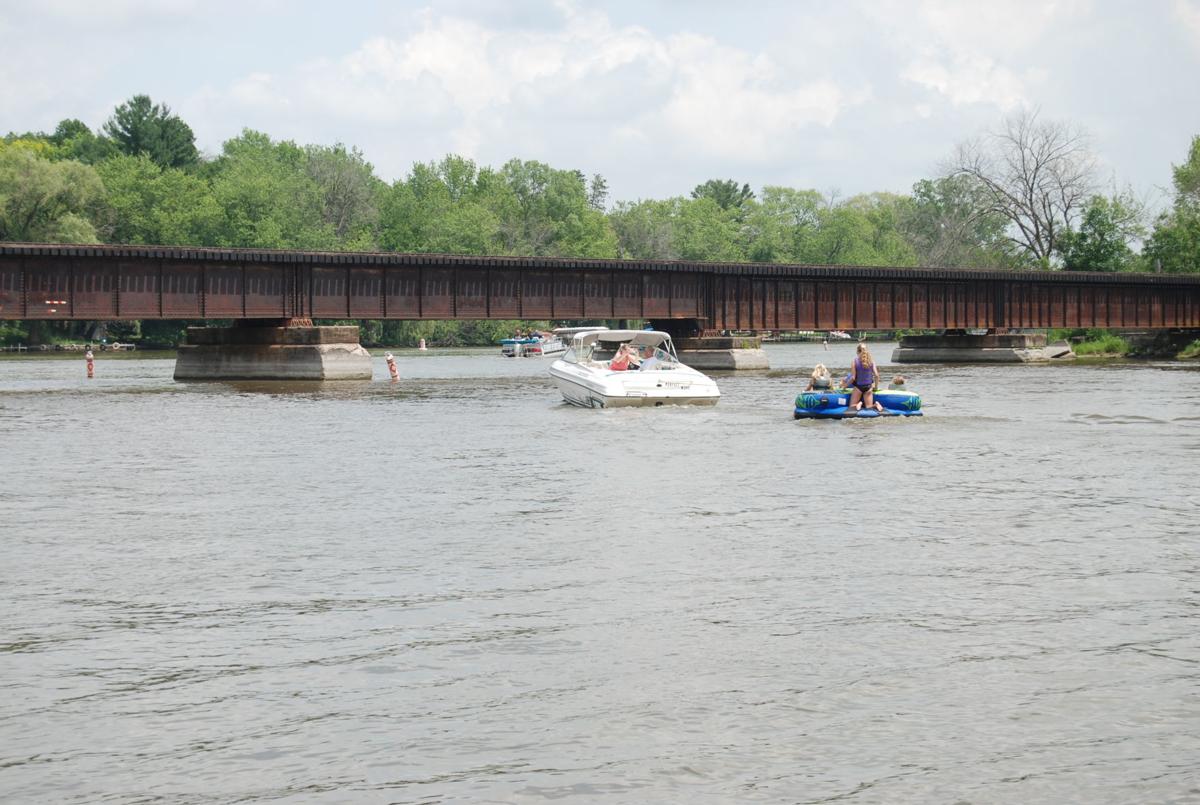 A boater moves through Channel 2 underneath the Edgerton railroad bridge spanning the Rock River between Indianford and Newville. The boat is traveling upriver, from Indianford toward Newville. 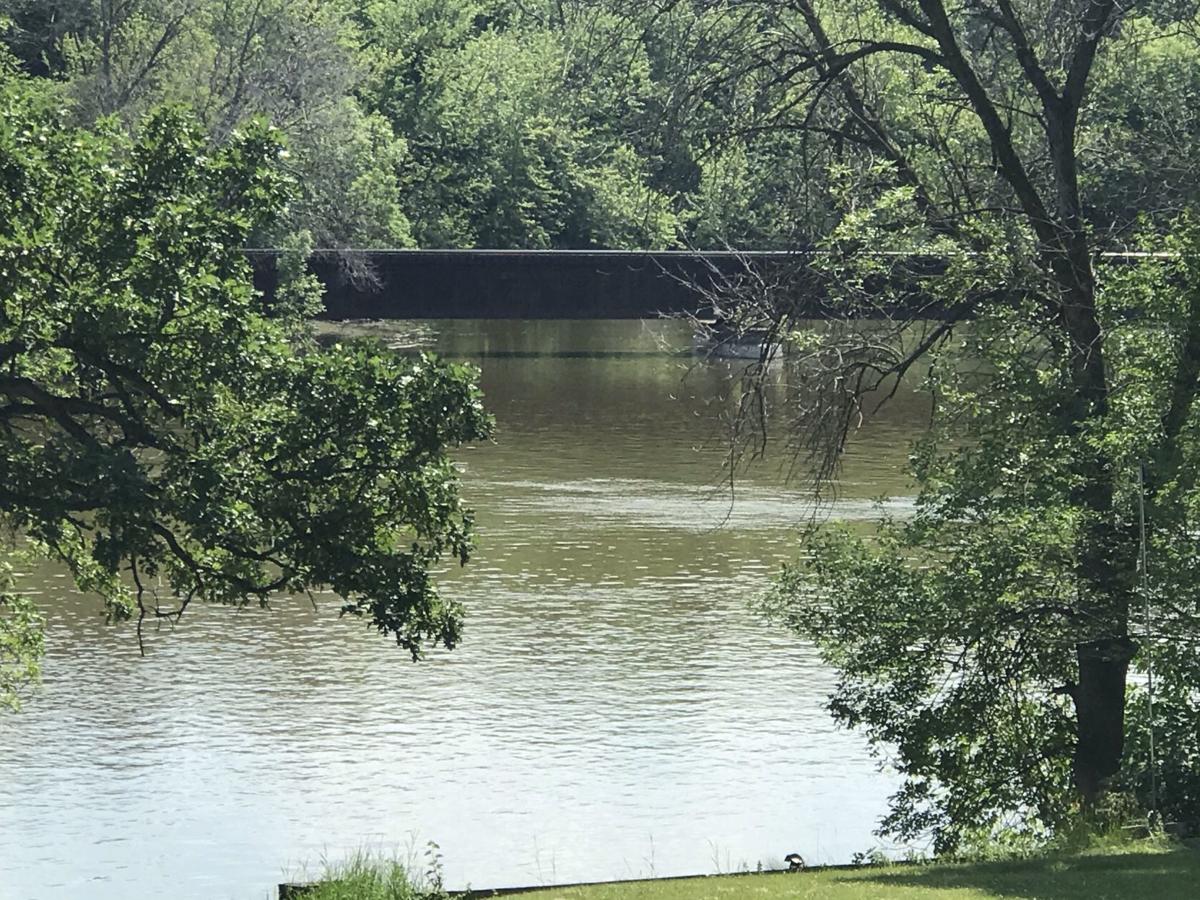 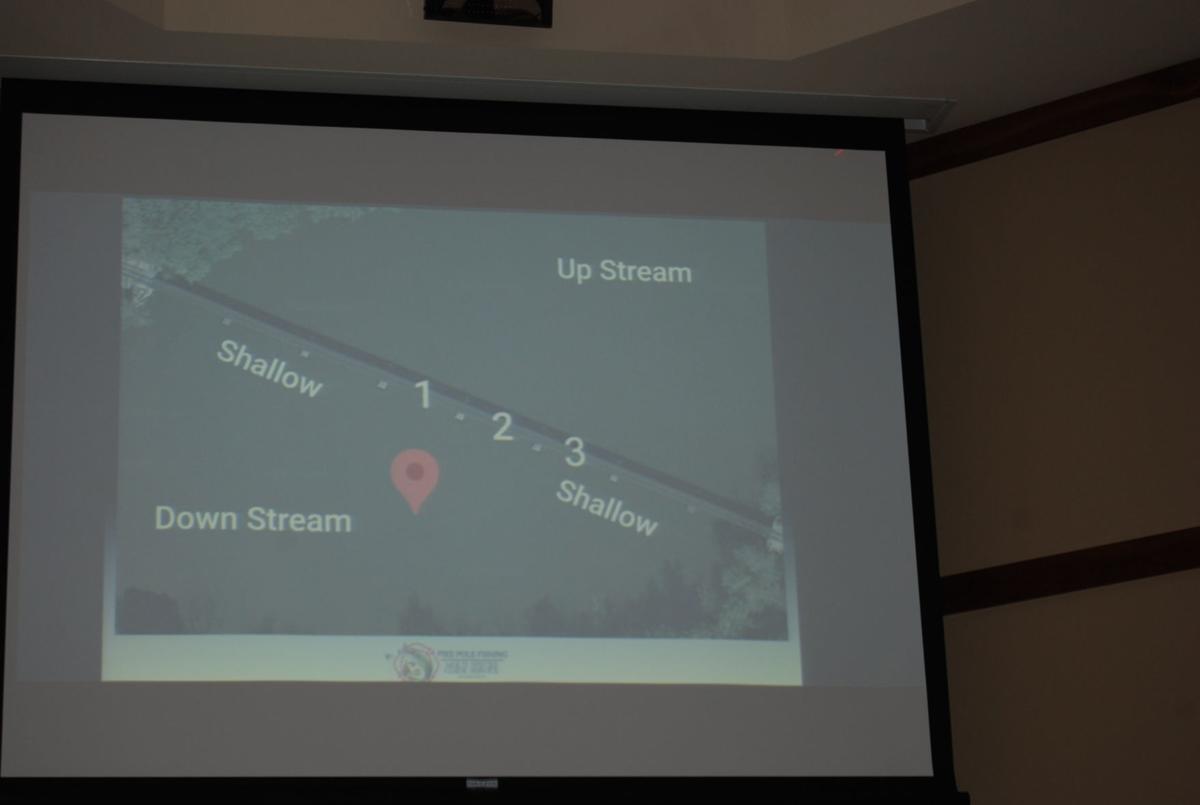 A slide shows the location of Rock River channels underneath a railroad bridge between Newville and Indianford which were recently discussed during an RKLD monthly meeting. Discussion focused around Channels 1 and 2, which were deemed the most passable by area resident and fishing guide Adam Walton.

A boat traveling downriver, from Newville toward Indianford, passes underneath the Edgerton railroad bridge.

A view of the Edgerton railroad bridge while passing underneath.

Officer Mike Herman of the Rock River Safety Patrol aboard a personal water craft (PWC) travels underneath the bridge.

A boater moves through Channel 2 underneath the Edgerton railroad bridge spanning the Rock River between Indianford and Newville. The boat is traveling upriver, from Indianford toward Newville.

A slide shows the location of Rock River channels underneath a railroad bridge between Newville and Indianford which were recently discussed during an RKLD monthly meeting. Discussion focused around Channels 1 and 2, which were deemed the most passable by area resident and fishing guide Adam Walton.

The Rock Koshkonong Lake District (RKLD) Board of Commissioners authorized Commissioner Mike Shumaker to explore buoys, lights and other safety markings to better identify passable channels for boat traffic underneath the Edgerton railroad bridge. The bridge spans the Rock River between Newville and Indianford.

Authorization was given after the board received a slide presentation on June 18 from Adam Walton, of Pike Pole Fishing Guide Service, who described himself as a longtime resident and fisherman offering guided fishing tours in the Koshkonong area.

Walton said he had been asked to explore conditions under the bridge by RKLD Commissioner Jim Jelinek, who is also a sergeant with the Rock River Safety Patrol.

Of eight channels underneath the bridge, defined as spaces between piers which hold up the bridge, two are passable, Walton said. Debris in the water, such as boulders, telephone poles and other sediments, comprise obstacles that, without careful navigation, could damage boat bottoms and equipment, he said. While some paint, placed in the 1990s, he suggested, remains on the bridge to indicate open channels, the markings are worn, and underwater obstructions remain unmarked. High water in the river also leaves less clearance when passing under the bridge, he said.

Those traveling by river between Newville and Indianford must navigate the bridge.

The approximately 610-foot-long deck plate girder construction bridge, built sometime in the early 1900s, is owned by the Wisconsin River Rail Transit Commission (WRRTC) and leased to Wisconsin & Southern Railroad (WSOR). The line is available to other railroads under emergency conditions, RKLD Chairman Al Sweeney said during a telephone interview. Sweeney is also the chairman of the WRRTC.

WSOR uses the line to transport primarily farm products such as corn, soy, some fertilizers, lumber and gravel. On average, Sweeney said, about 3 or 4 trains cross the bridge daily.

Formed in 1980, the WRRTC is comprised of 10 counties, Rock, Jefferson and Dane among them, charged with oversight of railroad property owned jointly with the Wisconsin Department of Transportation (DOT).

The DOT owns the real estate and WRRTC owns the improvements such as rails, signs, crossing equipment and bridges, Sweeney said.

In the past, improvements have been made to the bridge, Sweeney said.

Approximately 8-10 years ago, the bridge underwent a major upgrade: The top rail was replaced with continuous welded rail from “the Madison subdivision” to Milton, Sweeney said. The new rail, which came at a cost of approximately $7.5 million, is made without welded joints. Spans come in quarter-mile lengths. Before the improvements, the bridge had joined rails with some sections installed in the early 1900s. The new system allows for heavier loads and faster speeds, Sweeney said.

Nearly two years ago, Sweeney said he approached WSOR to see if structural changes to the bridge, that could aid watercraft passing under the bridge, were feasible.

Boat traffic, with the exception of smaller boats like canoes and kayaks, has trouble getting under the bridge when water levels are high, Sweeney said.

He asked about feasibility and cost associated with raising the clearance between the underside of the bridge and the water. The concept involved gaining clearance by replacing existing girders under the bridge with narrower girders. Bridge integrity would be maintained by adding more girders, he said. He learned that the project was “doable,” but would come at a cost of $1 million, he said.

In past years, he said, capital projects have been funded through partnerships with the WRRTC, WSOR and DOT.

As part of the leasing agreement with WRRTC, WSOR is responsible for maintenance on the rail system.

For WSOR, a priority is safety, Sweeney said, adding, as part of the leasing agreement: “We (WRRTC) hand off our liability to the railroad.”

To better mark river traffic channels, Sweeney said: “They (WSOR) are offering a willingness to install signs on piers. They don’t want people installing equipment on the transit commission’s property because they are liable.”

During RKLD’s June meeting, Shumaker said: “I thought the railroad would be responsible for marking this bridge.”

“The railroad is responsible to keep the bridge out of the water, but they are not responsible for what passes underneath it,” Sweeney said.

Shumaker will next look into options and costs, Sweeney said. Whether the lake district will opt to mark one or two channels will likely depend upon costs, he said. Choosing which channel to mark would likely be decided based on which one is safer, he said.

“The plan is to acquire the best channel marking system that could be installed on the railroad piers without a lot of maintenance, and have them lighted by solar.

“The channel is safe if one uses prudent operations and speed through the channel. If people watch what they are doing, it’s a workable passage under that bridge,” Sweeney said.

Using a “Humminbird Side Imaging” sonar system, on May 14, Walton documented obstructions in the water that made all but two of the channels difficult to maneuver, he said.

Sharing his images through a slide presentation, Walton counted five channels from the Fulton or south river bank, into the center of the river, labeling it “Channel 1.” Moving from Channel 1 toward the south bank, Walton labeled the next two channels 2 and 3.

Looking at two channels left undesignated on Walton’s slides closest to the Fulton or south side of the river, when approaching from upstream (or traveling downstream, from Newville towards Indianford), Walton described them as “impassable under normal conditions.”

The next channel, (moving past the two undesignated channels from the south shore towards the middle of the river), designated as No. 3, was described by Walton as “impassable in low conditions” when “approaching from upstream.”

Moving from the south bank further into the river, Channel No. 2 was passable “if approaching from upstream.”

Channel 1, closest to the river’s center, is marked with spray paint, Walton said. It is passable “if approached from upstream,” he said.

The next three channels, situated between Channel 1 and the north or Edgerton side of the river when approached from the upstream side were “typically impassable and rocky,” Walton said.

In Channel No. 1, Walton said the average depth was just above five feet and sonar showed items near the channel such as old wooden and concrete pylon, rock and gravel, and sand and mud piles.

Moving through Channel No. 2, traveling upstream (from Indianford toward Newville), Walton noted rocks and a telephone pole in the vicinity.

Headed downstream through Channel 3, Walton noted shallow rock piles with some areas within the channel “only two feet deep with higher water conditions.”

Walton concluded that “the railroad bridge is a fairly dangerous area, but thankfully boat traffic is not as heavy compared to other sections of the river.”

Poorly marked channels, bridge pylons, the presence of large rocks and the overall shallowness of the area were contributing factors, he said.