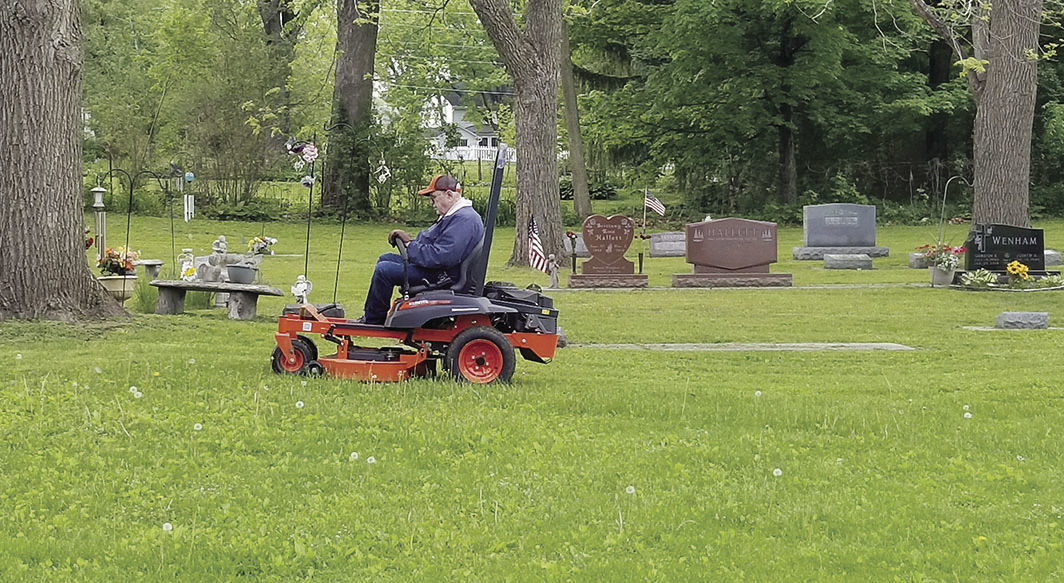 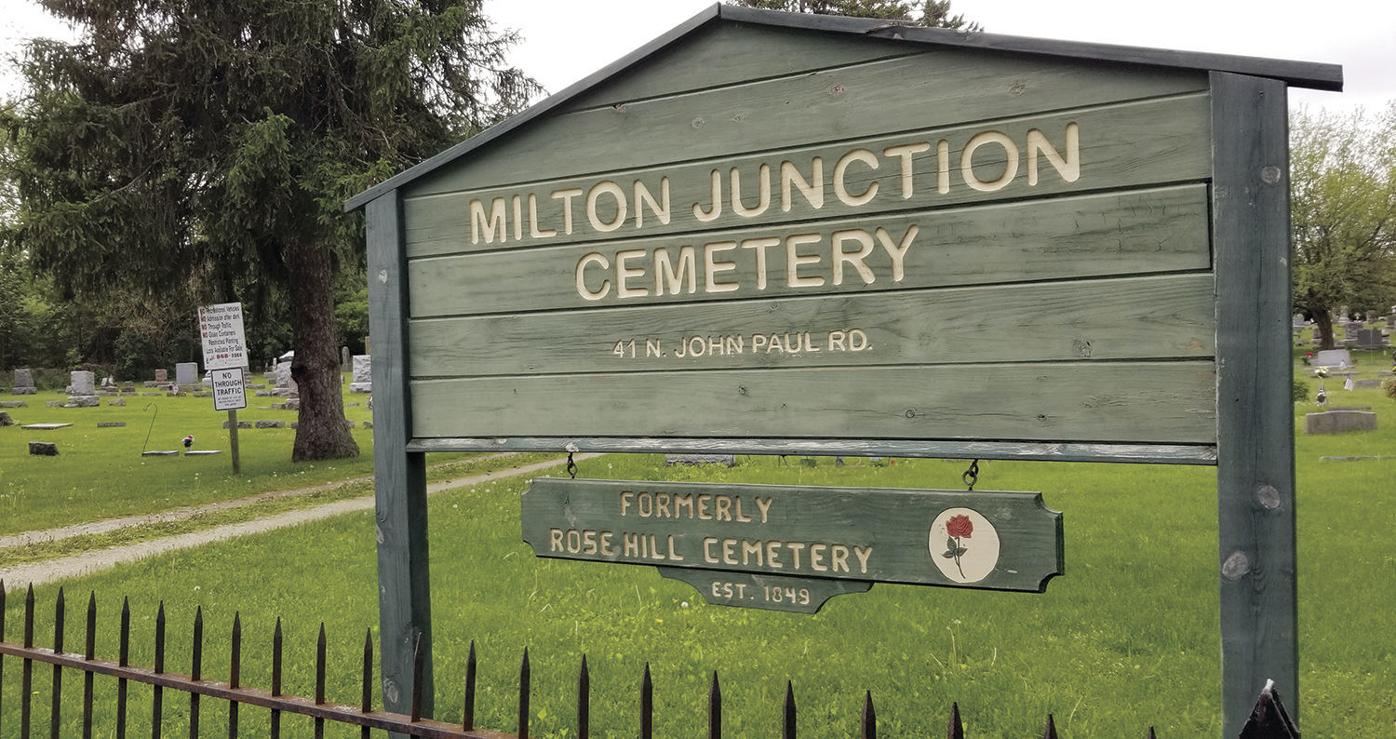 The Milton Junction Cemetery Association is governed by a board and is made up of 12 trustees. Officers are President Carole Anderson, Vice President Phil Watson, Secretary Barb Nardi and Treasurer Rebecca Whitney.

After Memorial Day, Anderson, Watson, Whitney and trustees Maxine Striegl, and Tom and Sandy Kunkel met at the Milton Public Library for an interview with the Milton Courier. Volunteers Harold Whitney and Bob Barker were at the cemetery mowing the lawn.

Whitney said the group is unique to Milton because it does not have ties to another entity such as the City of Milton or a church.

Nor does it receive state or local funding, Anderson said.

Funding comes from a gravesite fee and a fee for perpetual care of the gravesites. Perpetual care at Milton Junction Cemetery includes mowing and trimming of cemetery grounds, it does not include decorations for specific individual gravesites.

Whitney said “perpetual” means “forever.” While that describes the care, it does not describe how long the maintenance equipment or the funds will last.

Anderson said the nonprofit status is not something they take for granted, and they’re working hard to keep it. Their biggest challenge is revenue.

Gravesites in the past were available at $500 plus perpetual care, which was $27.50.

Anderson remembers there was a time when the cemetery didn’t have a fee for perpetual care.

Striegl said, “Between mowing and mowers breaking down –“

Although most of the people involved are volunteers, one person (not a board member) is paid to trim the weeds.

Whitney said the association tries not to increase its fees and compares its fees to others in the area, but sometimes increases are necessary.

Starting this month, costs are $600 for a gravesite and $200 for perpetual care. They are the same at Evergreen Cemetery in Fort Atkinson.

Milton Junction Cemetery has about 3,755 gravesites.

Whitney said more could be added with expansion to the north and west.

Today, the association is not concerned about running out of land.

Phone numbers of the board officers, along with rules and regulations, are posted on the garage at the cemetery. Appointments can be made to see what plots are available.

While some people plan ahead, Sandy Kunkel said it’s more common that someone dies and the family needs a plot.

She explains a gravesite is not only about location, but a connection to the people there.

“We know most everybody in that cemetery,” Whitney said. “I mean you might not know them personally but there’s a connection, you know the name. You know somebody that knows them.”

Anderson said people like to be buried in their hometown and near relatives.

Whitney said, “I have a lot of family in this cemetery. I really care how it looks and how it’s taken care of.”

Others nodded in agreement.

When Whitney went to another cemetery outside of Milton, she said she cried because the cemetery grounds looked terrible and hadn’t been mowed.

“I care about that and I think everybody on this board does,” she said. “I just think it’s reverence, it’s respect for people that chose this cemetery to be buried there.”

She said she’s only been part of the association since 2017. Others have volunteered longer.

“I just think we have a duty to do it if we can,” Whitney said.

Association members said they don’t like to see weeds and grass grow so tall that they block the names on the monuments.

“That’s not the way we keep our home,” Anderson said commenting on untidiness.

And like the job of keeping a home, she said the job of taking care of the cemetery is never-ending.

Milton Junction Cemetery is one of the Memorial Day service locations in Milton. Watson with Bill Whitford organizes the service at the cemetery.

Growing up, Anderson attended grade school in Milton Junction. On Memorial Day morning students would pick flowers from home, meet at the school, then marched into the cemetery and placed flowers on the veterans’ graves. “I have nice memories of that,” she said.

And, each year the association receives compliments for the Memorial Day service, in which Scout troops participate. At the cemetery, 168 veterans are buried.

In a letter to community members and friends of the cemetery Anderson wrote that the board’s efforts to preserve, protect and provide services that are vital to the Milton Junction Cemetery’s growth in the years ahead are important.

“Many of you have loved ones in the cemetery and appreciate the efforts in maintain a beautiful, peaceful and respectful environment for your family members,” she wrote. “The board of trustees feels the same way. Help us to continue our work in keeping the cemetery a non-profit organization and to keep the legacy of the Milton Junction Cemetery.”

Monetary donations can be made to the Milton Junction Cemetery and mailed to the association treasurer Rebecca Whitney at 8258 N. Ridge Trail, Milton WI 53563.