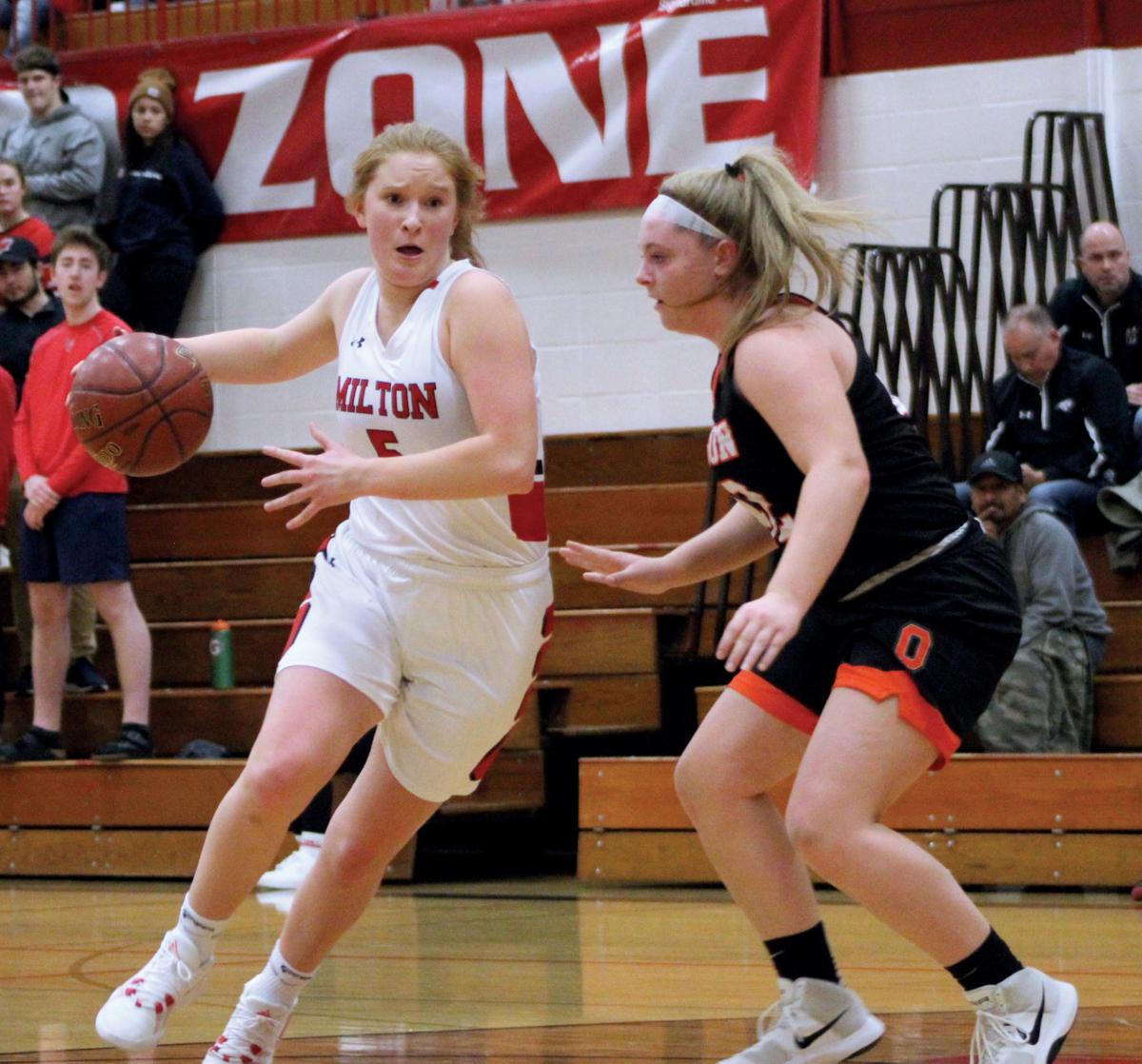 Junior forward Julia Jaecks begins a drive to the hoop during the Red Hawks’ 65-23 defeat to Oregon Dec. 6 in Milton. 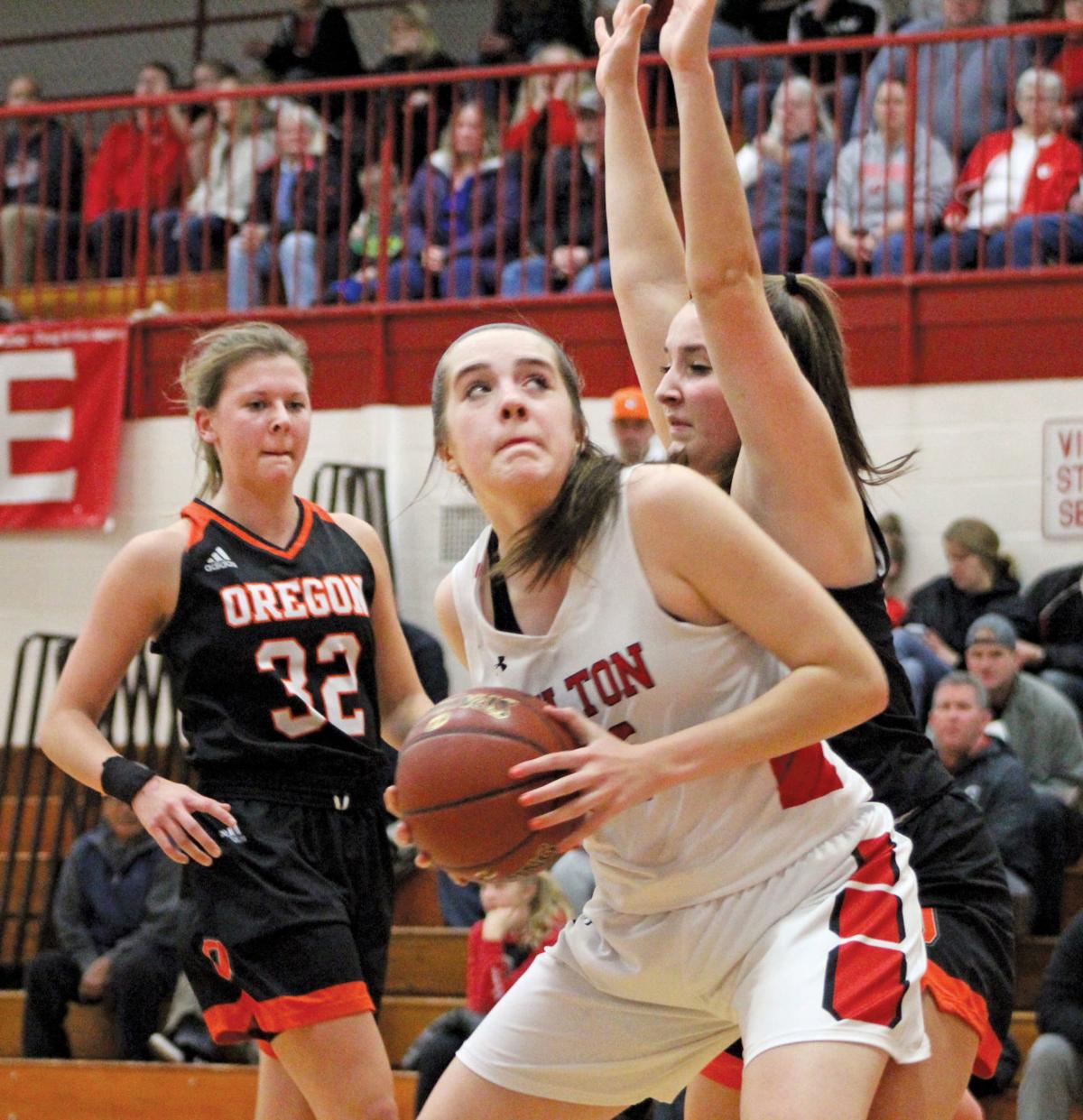 Senior forward Abbey Falk positions in the post during the Red Hawks’ 65-23 defeat to Oregon Dec. 6 in Milton. Falk scored five points in the loss.

Junior forward Julia Jaecks begins a drive to the hoop during the Red Hawks’ 65-23 defeat to Oregon Dec. 6 in Milton.

Senior forward Abbey Falk positions in the post during the Red Hawks’ 65-23 defeat to Oregon Dec. 6 in Milton. Falk scored five points in the loss.

The Oregon girls basketball team scored the first 18 points of the game as the Panthers defeated Milton, 65-23, in a Badger South Conference opener Friday, Dec. 6, in Milton.

Oregon built an 18-0 advantage less than four minutes into the game before junior forward Julia Jaecks scored Milton’s first points of the game with 13 minutes, 8 seconds left in the first half.

“We had five or six great looks early on and they didn’t fall,” Milton head coach Stacy Skemp said. “They had good looks early on too and they fell for them. It was just a huge deficit to overcome.”

The Red Hawks (1-3, 0-1) ended up scoring seven straight thanks to five straight points from senior guard Abbie Campion to cut the deficit down to 11 at 18-7 with 12:36 left in the half.

“We had it down to 11, and then the lights went out,” Skemp said. “A good team like that, that’s predicted to be at the top of the Badger Conference does not let up. They’re going to put the pedal to the metal. That’s what they did.”

The Red Hawks had trouble adjusting to the Panthers press in the first half, turning Milton turnovers into easy baskets to help balloon their several large runs.

“We’ve been working on it (breaking the press), but we’re letting team’s pressure or even fake pressure, dictate where we throw the basketball, where we cut,” Skemp said. “It’s something we’re going to keep working on and something we talked about.

“We just let it get the best of us and then it was a mental thing after that. To start the game they got a couple (steals) and then we just let it hang in the back of our heads.”

Milton was held to six points in the second half.

“We didn’t give up,” Skemp said. “I was excited to see the bench talking, girls picking each other up, our intensity was there.”

Campion and senior forward Abbey Falk tied for a team-high with five points each. Senior guard Alex Rodenberg and junior forward Nora Stuckey both collected four points each in the defeat.

The Panthers collected nine 3-pointers, including eight in the first half. Senior Liz Uhl tied for a team-high with two and scored a game-best 16 points.

“They have some really good outside shooters and I think a couple of shooters for them who maybe don’t always hit them were on tonight,” Skemp said.

The Red Hawks hosted Fort Atkinson in a Badger South Conference game on Tuesday, Dec. 10, but results were not available by publication time. Milton will take on Madison Edgewood Saturday, Dec. 14, in Madison at 7:15 p.m.