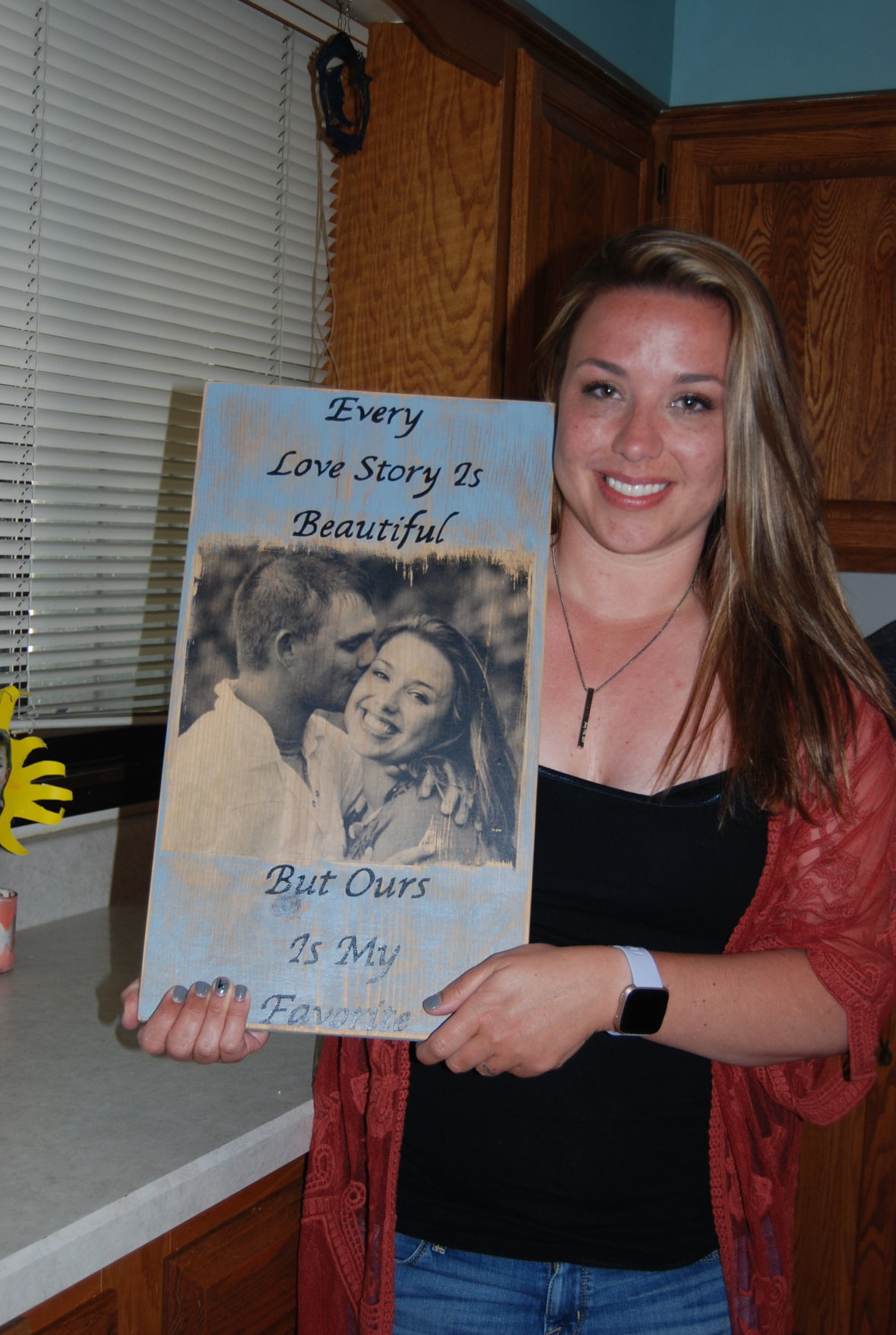 Caitlin Schmidt holds one of many signs made by her husband Matt. He was a craftsman who enjoyed working with his hands, she said. Matt died last month while exploring a woodworking process called fractal burning. Caitlin wants to spread awareness about risks associated with the process. 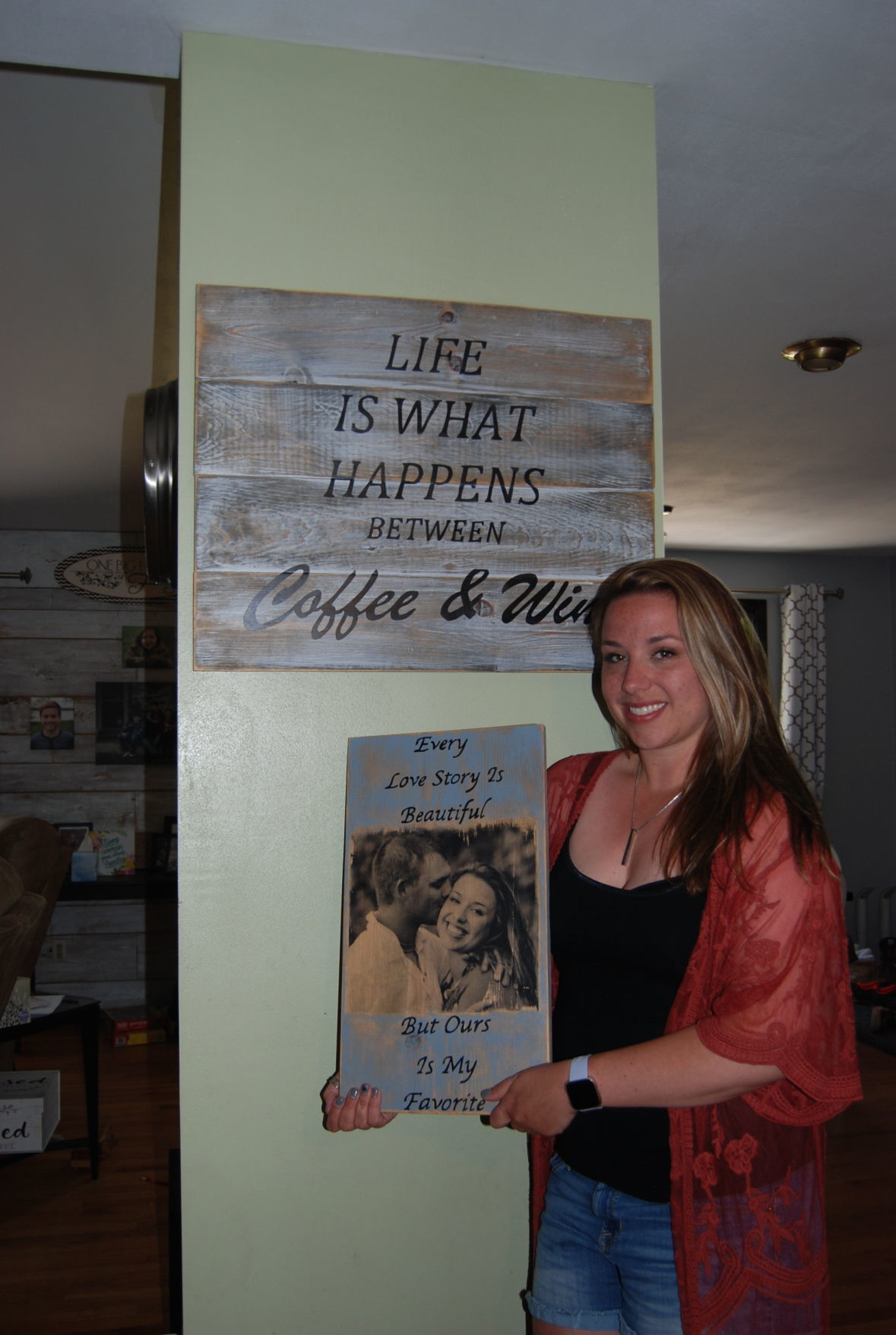 Milton resident Caitlin Schmidt, whose husband, Matt, died last month after experimenting with fractal burning, shares some of the many signs made by Matt displayed throughout her home. Caitlin is committed to bringing awareness to the public about risks associated with fractal burning. 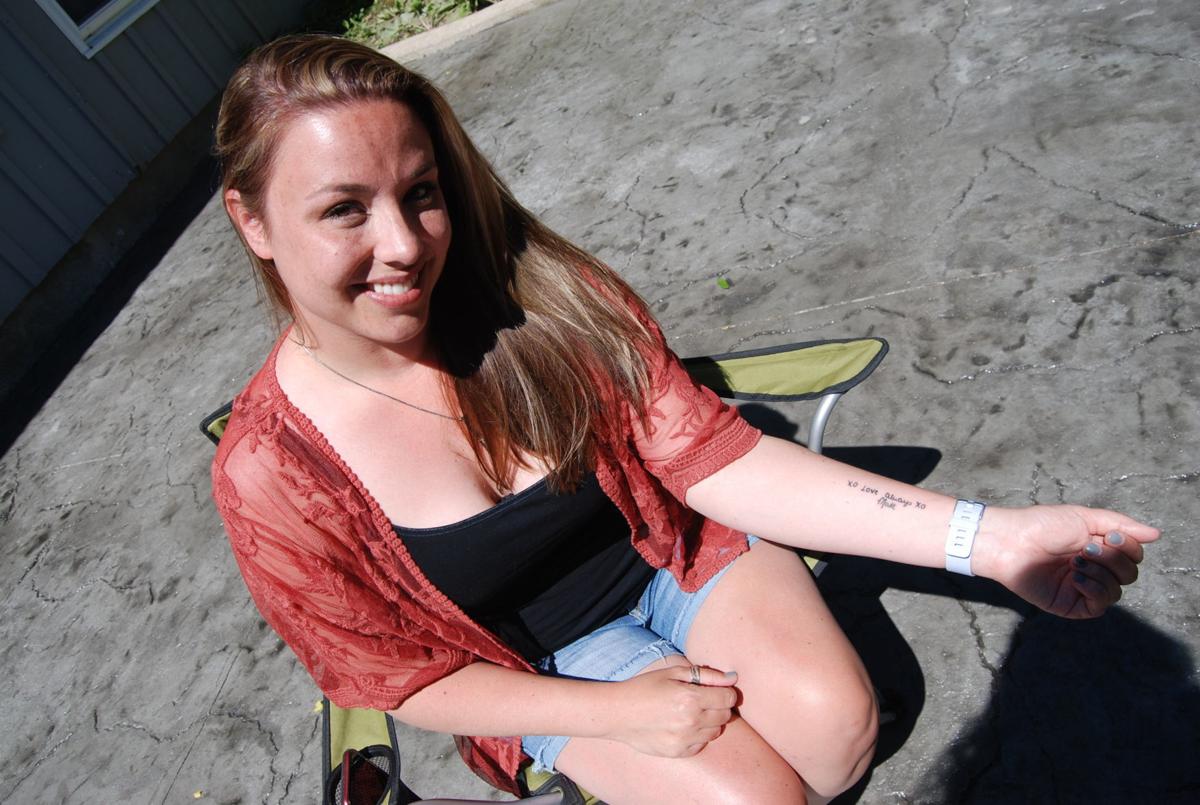 Caitlin Schmidt shares a tattoo which says “XO Love Always XO Matt.” The words were originally written in a love letter from her husband Matt. The couple became friends when they were 12 while growing up in Milton. Matt lost his life May 14 while exploring a woodworking technique called fractal burning. Caitlin wants those curious about the process to become aware of the associated risks. 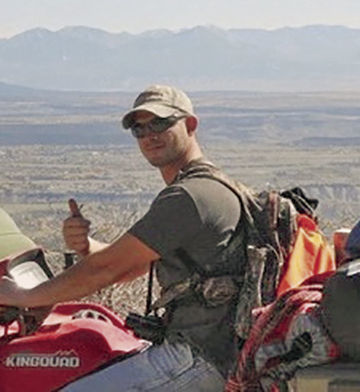 Caitlin Schmidt holds one of many signs made by her husband Matt. He was a craftsman who enjoyed working with his hands, she said. Matt died last month while exploring a woodworking process called fractal burning. Caitlin wants to spread awareness about risks associated with the process.

Milton resident Caitlin Schmidt, whose husband, Matt, died last month after experimenting with fractal burning, shares some of the many signs made by Matt displayed throughout her home. Caitlin is committed to bringing awareness to the public about risks associated with fractal burning.

Caitlin Schmidt shares a tattoo which says “XO Love Always XO Matt.” The words were originally written in a love letter from her husband Matt. The couple became friends when they were 12 while growing up in Milton. Matt lost his life May 14 while exploring a woodworking technique called fractal burning. Caitlin wants those curious about the process to become aware of the associated risks.

As Caitlin Schmidt sat on a newly completed backyard patio Saturday, June 13, she vacillated between smiles and tears. Her memories of her husband, Matt, are loving and happy. The grief over losing him is deep and fresh. Matt, 35, died in his garage one month ago while exploring a woodworking technique known as fractal burning.

Before he died, Matt, a labor foreman with JP Cullen, started a patio project. His coworkers recently finished it. A sealer was applied early Saturday morning.

Matt enjoyed making things with his hands, Caitlin said. She pointed to a wooden play structure standing prominently in the yard. Matt made it, she said. The couple has three children: Aiden, 13, Lily, 11 and Forest, 5.

In the months before he died, Caitlin said, Matt became interested in fractal burning, also known as Lichtenberg burning, a process which uses electricity to burn unique patterns into wood. Together, the couple had watched videos about the process and Matt was intrigued.

“We didn’t know it was dangerous,” Caitlin said. “There were no warnings with the videos. If Matt would have known, he would have never done it.”

Last Sunday, June 7, Caitlin said, she posted a video on her Facebook page warning about the risks of fractal burning.

Since then, the video has received over 23,000 views, 300 shares, and numerous commenters have reached out, thanking her for the warning. Many, like Matt and Caitlin, were unaware of the potential dangers, she said.

In that mission, others have offered to help. Caitlin said she has been in contact with NBC-15 and there is an interview planned for sometime this month. Matt, too, would want the message out, she said.

Who was Matt Schmidt?

Caitlin and Matt grew up together in Milton. He was the boy who wrote her love letters when they were 12. He was the senior voted “life of the party” when they attended Milton High School, graduating in 2003.

After high school, life took them in different directions: Caitlin went away to school, first, to the University of Southern Indiana, and then to Edgewood in Madison, where she took classes in early childhood education. In 2006, Caitlin returned to Janesville where she and a friend started a private school serving children age 2 through grade 12. The school closed in 2009.

Matt joined the Air Force, attending boot camp in Texas. He returned to Milton in 2003 and sought work through the laborers union. He found he was good at concrete work, Caitlin said, and was hired by JP Cullen. He started as a basic laborer and worked his way through the levels of foreman. After 14 years with the company, he achieved the title of Labor Foreman Level 3.

While they were apart, the friends kept in touch, Caitlin said. They began dating in 2008 and moved into a home together in Milton that same year. In 2011, Matt and Caitlin were married, and in 2016, the family moved into its current Milton home.

“Matt was a person who never left you wondering about how much he loved you. He was so forthcoming with that information,” Caitlin said.

He was an avid outdoorsman and enjoyed bow hunting, she said.

He was a devoted dad, Caitlin said, adding: “He was involved in everything. He went to every practice, school parties; he was a busy, busy guy. He had projects around here. They were nonstop and he always involved the kids.”

Matt began crafting in 2009, Caitlin said. He made jewelry from deer antlers and lamps from buck rubs he found on trees. He liked using natural materials, she said.

Then he moved to signs.

“He would make signs for everybody; he had a lot of goofy sayings,” she said.

He made customized bags boards for friends and he had gotten a lathe. He planned to make duck calls, Caitlin said.

As his interest in fractal burning grew, he spent months watching videos, many of which had been placed online by a friend who also was experimenting with the medium, Caitlin said.

“Matt was excited to learn this. What happened was a total accident. It was nobody’s fault,” Caitlin said.

In April, with help from his friend, Matt obtained a device for fractal burning.

While Caitlin said she didn’t understand all the particulars about creating the device, Matt’s “machine,” used jumper cables to transmit high voltage electrical currents through wet wood. The process scarred the wood with intricate patterns.

“Every single piece is unique and you don’t know what it will turn out like,” she said.

Working with electricity, she said: “We knew he could get a shock, but we had no idea it could kill you.”

There wasn’t a text

Matt, according to his obituary, died on Thursday, May 14, but for Caitlin, worry began Wednesday night she said when she didn’t receive a “goodnight” text. That was unusual, she said.

After attending Blackhawk Technical College in 2018, Caitlin became a registered nurse, finding employment through Beloit Memorial Hospital. In February, she began working as a traveling nurse and was away that night in Manitowoc on assignment.

She started home the next day, but by 7 a.m., while driving through Milwaukee, she still had not heard from Matt. A “good morning” text was his usual practice.

As she drove home, her son delivered the news by phone that during the night Matt had gone into the garage to explore the fractal-burning machine.

Through FaceTime, Caitlin said, she would see the first image of her husband’s motionless body in the garage. She rushed home to be with her kids.

Once home, the full tragedy unfolded: when first responders arrived at the home, Matt was already deceased, Caitlin said.

“He was still figuring it out,” she said of the machine. “He hadn’t made a piece yet,” she said.

“I called the medical examiner’s office one week later and they told me he had burn marks on his hands. The electricity had just gone through his upper body. It went into one hand and out through a finger on the other.

“He was terminal before impact, they said. He was gone before his body hit the floor,” Caitlin said.

After losing Matt, Caitlin said, she asked: “How could this have happened?

“Turns out, there are lots of ways this can kill you.”

On Matt’s device, she said, one of the casings on a clamp was compromised.

“It was just enough that when he went to grab the clamp, he connected with the metal,” she said.

“People make the equipment themselves. You can look up online and it shows you how to make it. There are no warnings, but this could easily kill you,” she said.

Since posting the video to her Facebook page, Caitlin said: “People have contacted me saying they never knew it was so dangerous.

“What helps me is that so many people are saying, ‘oh my God, my husband was asking for a machine like this and since you shared this, he won’t do it.’

“This is the worst possible pain other than losing my children. I can’t sit on this knowledge and have this happen to another family.”

Back on the patio, Caitlin talked about an outpouring of support from friends and family.

Before the new patio could be poured, an old slab needed removal. “Matt had just dug everything out and there was a pile of rubble over there.

“By the time I got home on the day he died, his boss was already here. He was very supportive and within a short time his work friends were here. JP Cullen shut down that day and had a debriefing with their guys. It was a really big loss for them, too,” she said.

“I can’t remember my life without Matt. Losing him is like losing your compass. It’s just too big. He was here and then he was gone,” Caitlin said. For the family, she said, “It’s just a long road ahead.”

On signs, Matt’s words hang within the home. Some are humorous: “What the (picture of a fork) is for dinner,” while others are sentimental: “Every Love Story Is Beautiful, But Ours Is My Favorite.”

Matt was the man who wore his heart on his sleeve, Caitlin said. Today, she wears the words: “XO Love Always XO Matt,” tattooed on her arm. They, too, are Matt’s words, she said, written to her in a love letter.