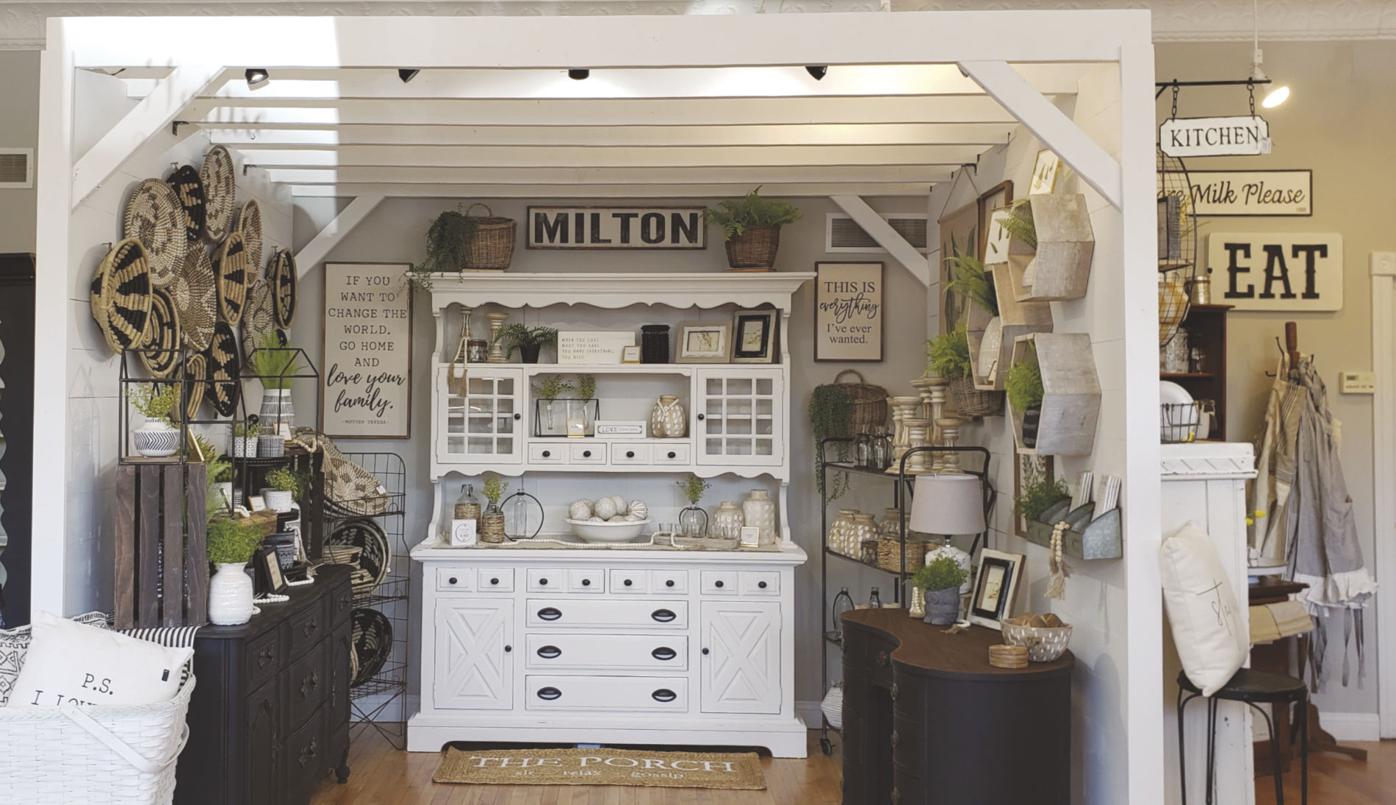 Hattie and Elsie, a new home goods store is having a grand opening Saturday and Sunday at 650 College St. 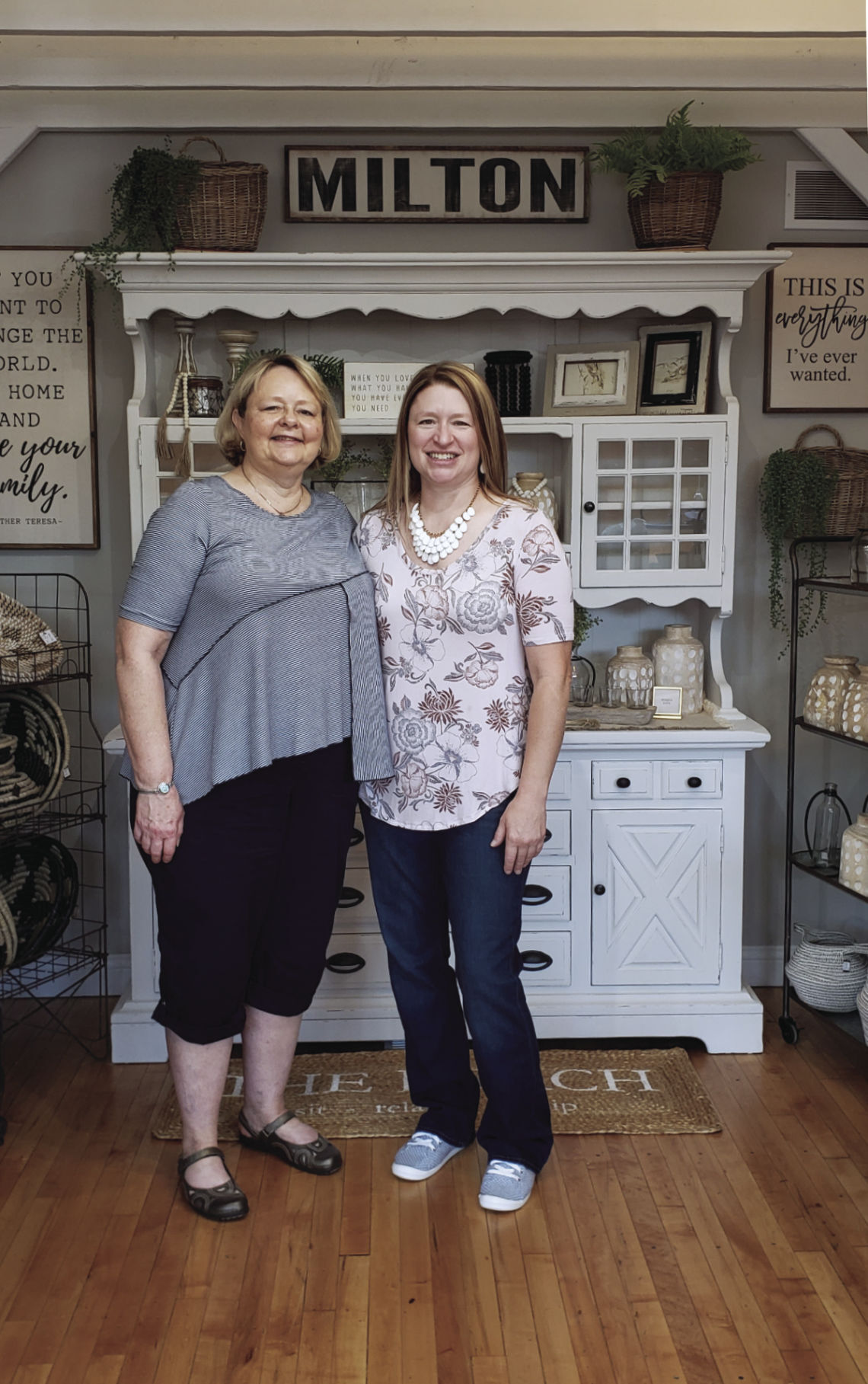 Hattie and Elsie store owner Kate Petersen poses for a photo with her mother, Christy.

A new home goods store opens this weekend at 650 College St. The name of the store is Hattie and Elsie.

Hattie and Elsie, a new home goods store is having a grand opening Saturday and Sunday at 650 College St.

Hattie and Elsie store owner Kate Petersen poses for a photo with her mother, Christy.

A new home goods store opens this weekend at 650 College St. The name of the store is Hattie and Elsie.

If hard work and a good dose of motivation are the keys to success, then Hattie and Elsie, the new home goods and décor store at 650 College St. is destined to be here a while. Brimming with items from repainted furniture to smaller items to dress out a shelf or towels for the kitchen, the newly remodeled shop is ready to serve its customers’ needs. A grand opening 10 a.m. to 4 p.m. Saturday and Sunday will launch the business. At 12:15 p.m. Friday the Milton Area Chamber of Commerce is holding a ribbon cutting.

Store owner Kate Petersen describes the style of her items as whatever is on trend. “We do a lot of farmhouse and Boho style and modern farmhouse décor.” She hopes to create a warm, cozy atmosphere for shoppers. Before, customers would browse Petersen’s booths at fairs, shows and pop-up events. They often told her that it all looked so inviting. “That’s my goal for the store now, too. I want customers to feel like they’re walking into their own home.” Petersen paints a lot of furniture, such as dressers, buffets, hutches and dining room sets. There are even a few church pews in the back waiting for her handiwork.

Shoppers will notice the furniture when they walk in. Beneath a large sign which simply says, “Milton,” stands a farmhouse white painted hutch. With doors and drawers on the bottom, the top features glass doors on each side with shelving between the doors and across the top. Petersen said it’s a dramatic change from when she acquired it. “It was very ’70s,” she said referring to dark brown stain typical of that time. Customers can purchase the furniture but in the meantime, these pieces showcase other merchandise. Woven baskets, ceramic pots, greenery and kitchen items are all popular. “We have a lot of kitchen linens,” said Petersen. A black iron rack holds stacks of neatly folded dish cloths, towels and hot pads. Candles, soaps and other scented items fill another rack. A few vintage items and handmade gift pieces which Petersen purchases from Midwest makers round out the offerings.

Department and seasonal items will change out periodically. Campers and lake-lovers will find decor which appeals to them and dog and cat lovers will, too. They might even find a new must-have leash.

Petersen’s decision to open a brick and mortar store didn’t come overnight. “It started in 2014,” she said, “just doing crafting on the side.” That changed after her daughter was born. “I hated putting her in daycare,” Petersen explains. “I needed something flexible.” Living in Iowa at the time, she decided to take the plunge and sell her merchandize full-time, taking her booth to fairs, shows and malls. In 2017, she moved to Janesville, bringing her business with her. When the pandemic shut everything down, Petersen saw more opportunity. “Lots of people, with the pandemic, were shopping small so that helped.” That’s when she started working on her website and Facebook page, taking orders online. “I was doing curbside pickups actually at my house,” Petersen said. With customers from Madison, Milwaukee, Rockford and even Chicago, and local shoppers adding to her base, Petersen landed in Milton, looking for a storefront. “This was the first one I looked at and I loved it!” she said.

Why Milton? Petersen responded with enthusiasm. “It’s just such a cute little community!” She always enjoyed having a booth at the Milton House Arts & Craft Fair. “I loved the atmosphere and meeting people in Milton.” She appreciates that there are other shops and wineries to bring in traffic as Milton revitalizes the area. “I thought it was a good time to get in on the ground level.”

Before moving in, much remodeling work was done. Original hardwood floors were uncovered and refinished, walls were removed to open up the space and tin ceiling tiles were cleaned and reinstalled, accenting the store’s theme.

When asked about the name “Hattie and Elsie,” Petersen laughed. “There’s a story behind it.” Hattie was her great-aunt, Elsie was Hattie’s daughter. The two were known to argue about everything. When Petersen was growing up and argued with her mother, her father would say, “Knock it off, Hattie and Elsie!” Petersen had tried a few other names for her business, but “Hattie and Elsie” stuck. Not only is it fun and clever, it also works to include her mother, Christy Petersen, who is also a part of the business. Christy will have products of her own to sell. She’ll help in the store, too so Petersen can have some time away.

Petersen’s father, John, gets involved fixing fixes broken furniture before it’s painted and does anything else that’s needed. The pergola over one of the display areas is his work. “He’s pretty great!” Petersen said.

One thing that surprised Petersen was people handing her photos of a fireplace mantle or other part of their home and asking her to help them choose something for that space. Or someone might find a shelf in the store and then ask her to find the right things to put on it. Petersen is flattered that people value her opinion. It builds relationships and, Petersen said, “I love it!”

Petersen’s plan for the future is to keep growing and staying in Milton for a good 20 years or more. With 5,000 followers on her Facebook page, she hopes to them to Milton and boost area businesses. She concluded, “I think it will be a great fit for everybody.”