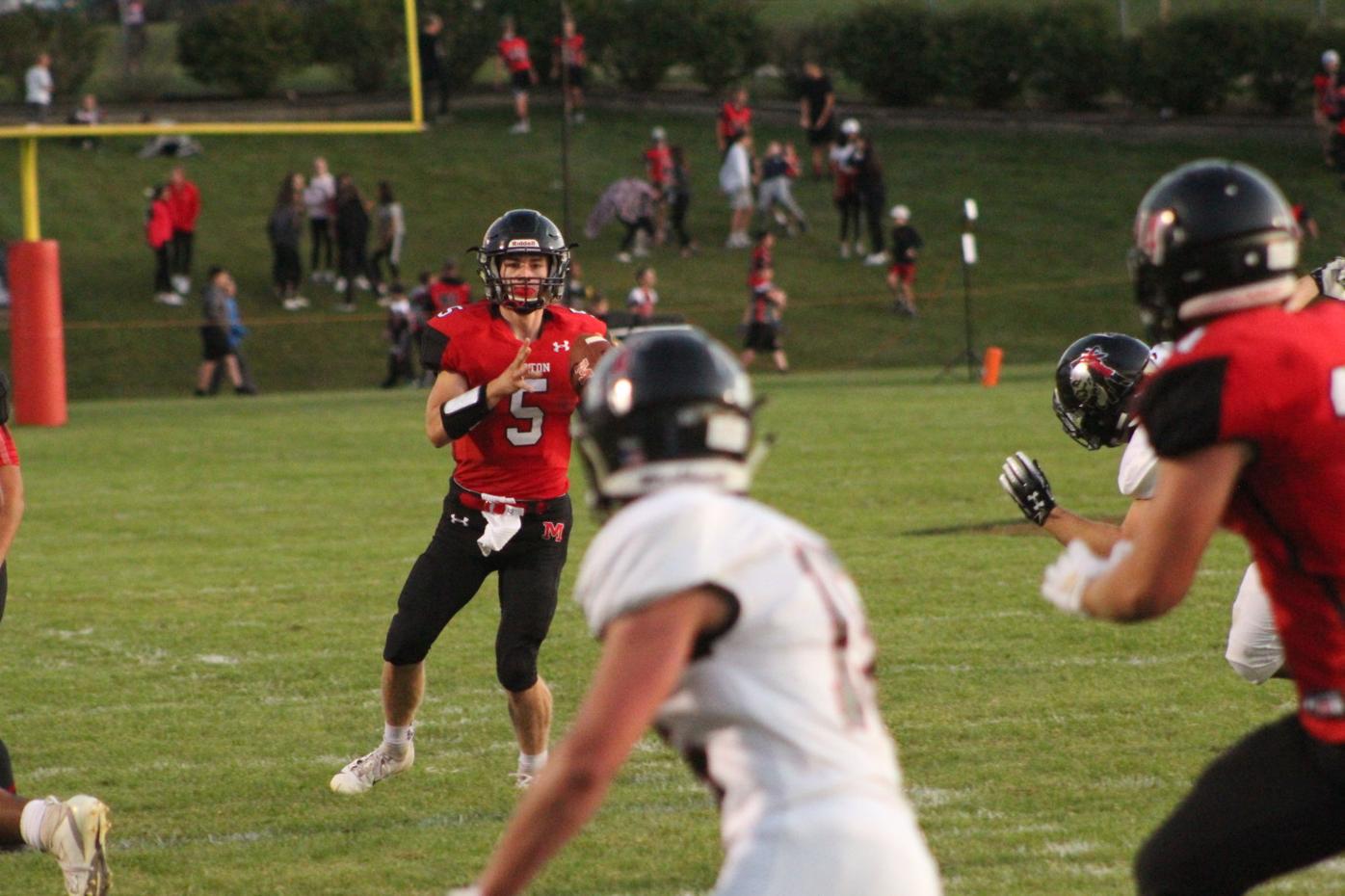 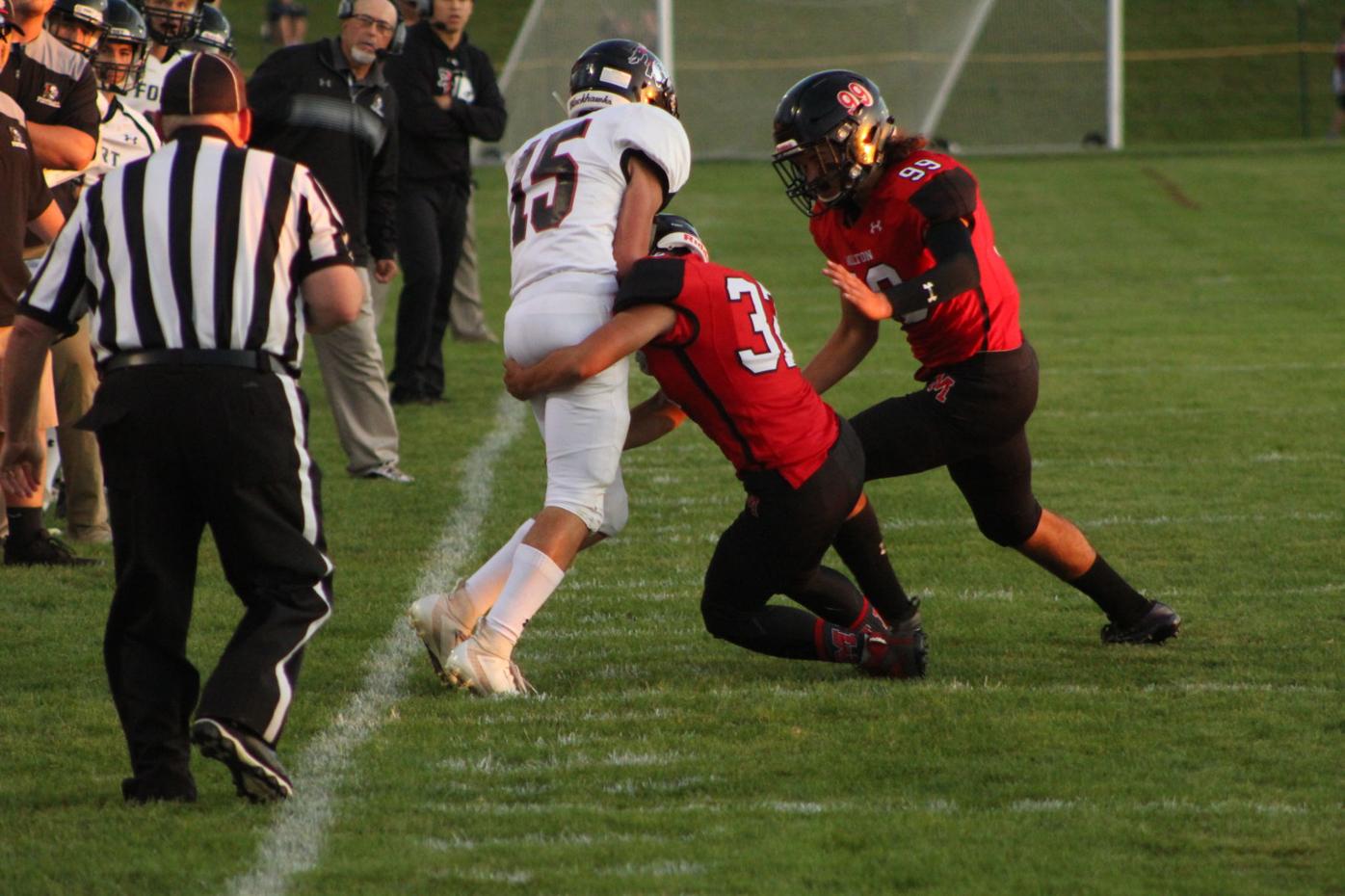 Rodney Wedig may have a second career as a preacher, because the Milton football team has been picking up what the first-year head coach has been preaching.

The Red Hawks opened up Badger South Conference play Friday night with a 41-7 victory over Fort Atkinson at Anderson Field in Milton.

Milton moved to 3-0 on the season with the win and has now combined to outscore opponents, 136-22, on the season.

“We’ve done what we’ve preached since we got here and that’s play fast, aggressive defense and just grind it out on offense,” Wedig said. “That’s exactly what we did again today.”

The Milton offense was highlighted by a three-touchdown effort from senior running back Jerry Jones and the defense almost pitched a shutout, giving up just one touchdown and 161 total yards.

“We have a good front, good linebackers, we just have smart players on defense,” Milton senior safety Jordan Stivarius said.

“We’re coming out with swagger and playing with confidence,” Stivarius added.

For Fort Atkinson, it was a lack of consistency that led to the conference-opening defeat, according to head coach Brady Grayvold.

“It’s just being consistent,” Grayvold said. “It’s four yards here and a hold, five yards here and false start. You get the ball rolling a little bit and then you’re back. You can’t do that against a team like Milton.”

Fort Atkinson (0-3) committed six penalties for 50 yards in the defeat.

After forcing a three and out on the first possession of the game, the Red Hawks struck quickly on offense with a 26-yard touchdown from senior Dane Nelson, who hauled in the pass from junior quarterback Evan Jordahl in the right-corner of the end zone.

After another three and out forced by the Milton defense, Jones put Milton up 12-0 after he weaved his way through the Blackhawk defense with an 11-yard touchdown run with just 1:37 left in the first quarter.

The Blackhawks failed to pick up a first down on their third possession of the game and once again, the Milton offense got back to work when it got the ball back.

This time it was senior running back Nick Huber, who scored five rushing touchdowns for Milton last week, who found the end zone with an eight-yard burst.

After the two point conversion, the Red Hawks led 20-0 with 9:52 left in the second quarter.

The Blackhawks picked up their first first down of the game on its fourth possession, but was forced into a fourth and long and punted back to the Red Hawks.

Nelson brought in his second touchdown of the game with a 10-yard catch from the arm of Jordahl with 4:38 left in the half to balloon the Red Hawk lead to 27-0 with 4:38 left until halftime.

A few minutes later, Jones rattled off his second touchdown of the night as he sped his way to a 61-yard run.

The score put Milton up 34-0 with 1:58 left in the half. It was Milton’s fifth score in as many possessions.

The Red Hawks picked up where they left off after the break.

On the first possession of the second half, Milton got put into a fourth and 17 from the Blackhawk 27, but a Jordahl screen pass to Jones set up a 27-yard score to extend the Red Hawk lead to 41-0 with 8:03 left in the third.

Fort Atkinson broke up the shutout with 3:30 left in the game thanks to an 11-yard touchdown run from senior Mika Gutoski.

“The frustrating part is there were multiple drives that game where we were moving the ball and we might of had two or three of those drives,” Grayvold said. “It’s self inflicted. We have to clean that up. We preach discipline all the time.”

Fort Atkinson will look to clean things up Friday at Stoughton (2-1) at 7 p.m.

Milton will also be on the road as the Red Hawks take on Monona Grove Friday at 7 p.m.