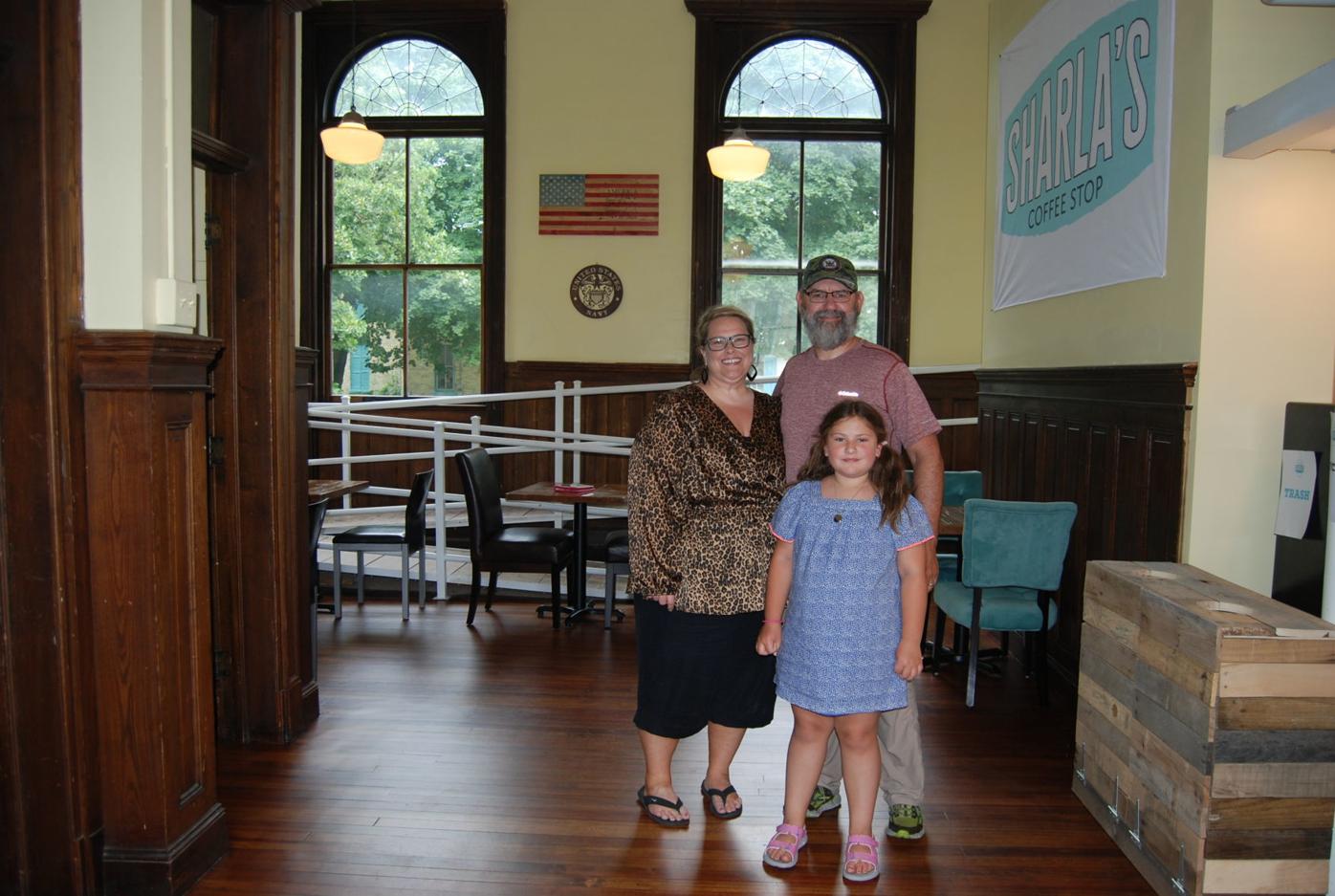 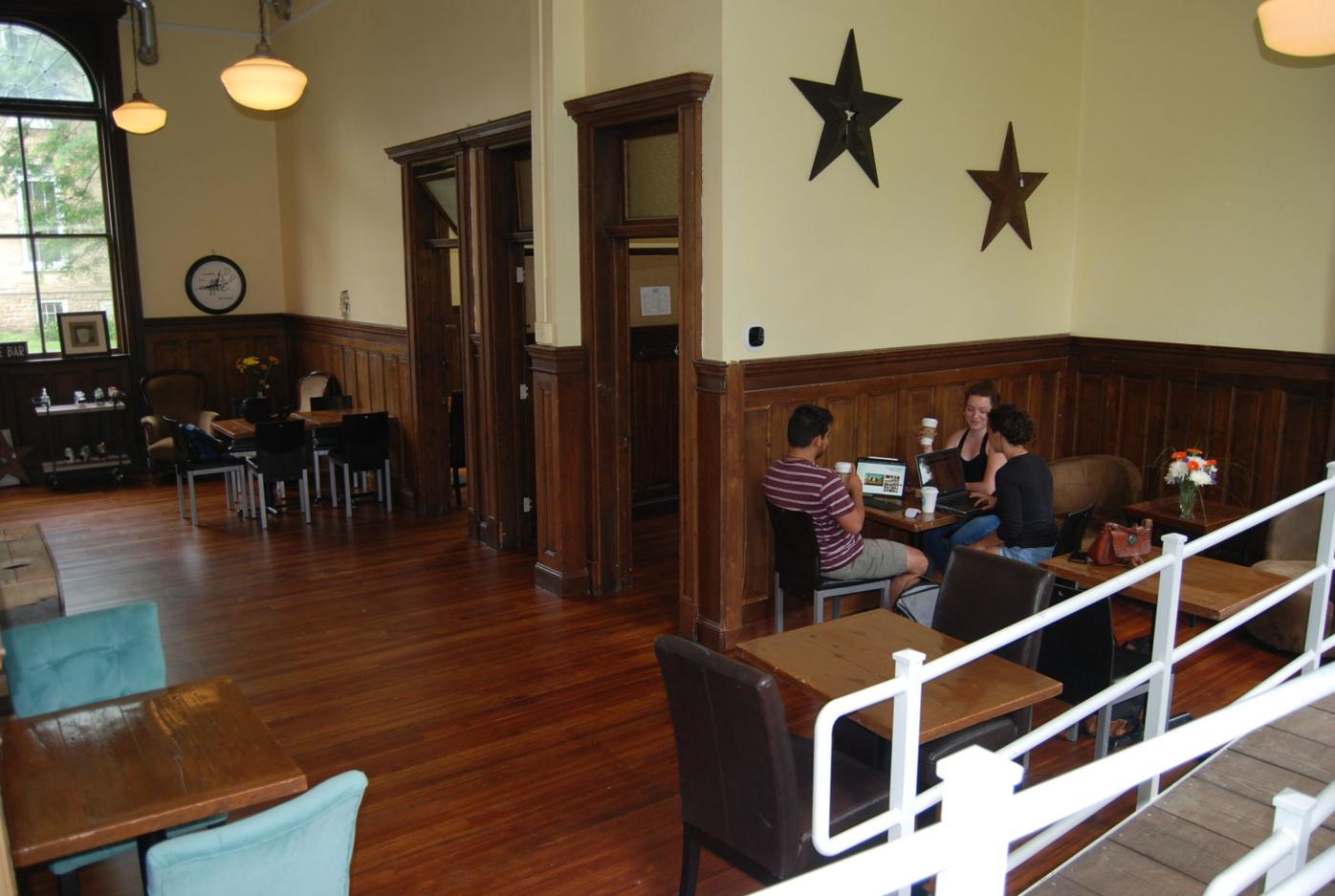 A view looking across the central space in Sharla’s Coffee Shop. Opened June 20, the new coffee shop offers a variety of hot and cold drinks, and has three varieties of its own blends including DNR, a breakfast blend, and Dave’s Power Blend, an espresso which comes both caffeinated and decaffeinated. 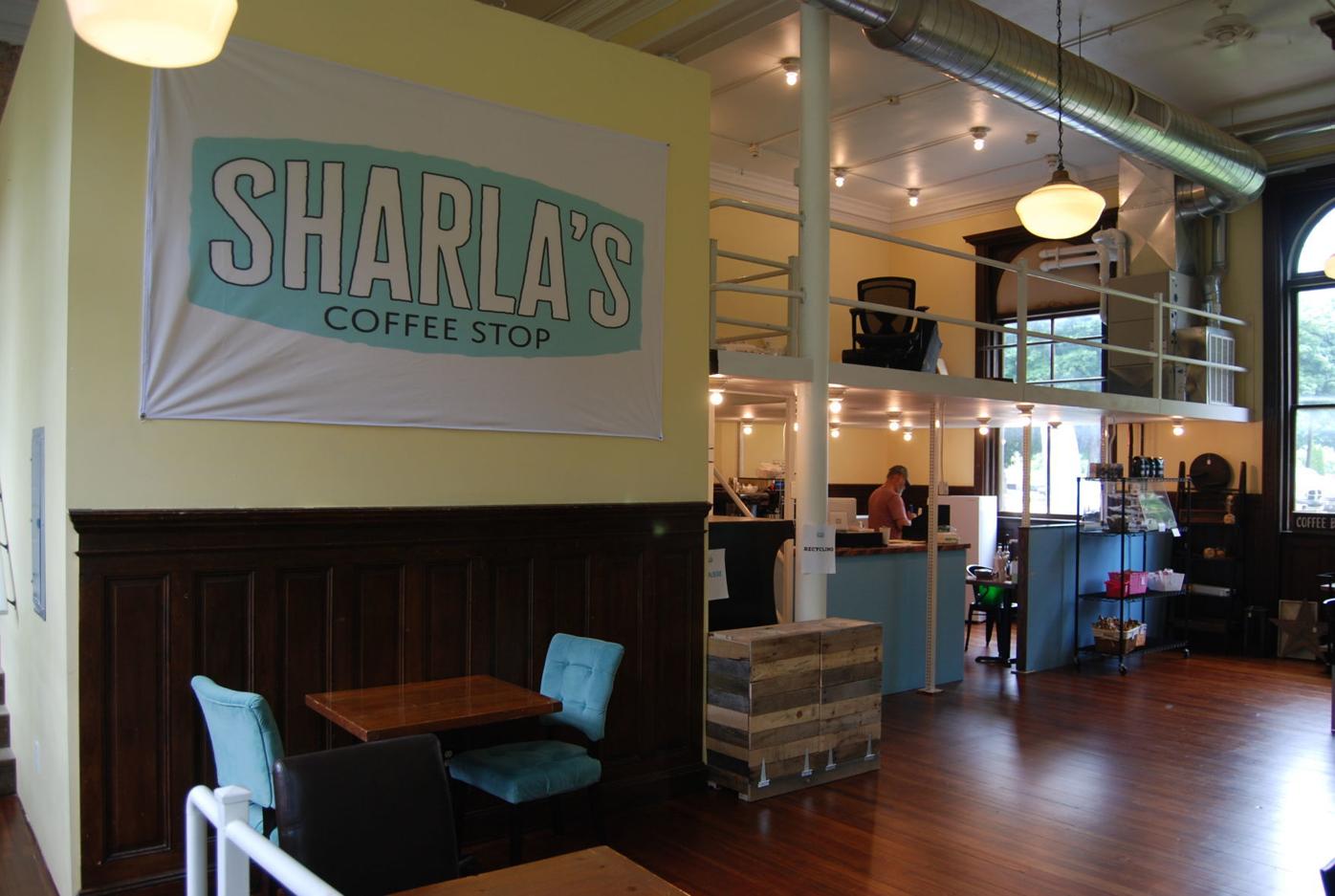 Space inside Sharla’s Coffee Shop is warm, open and inviting. 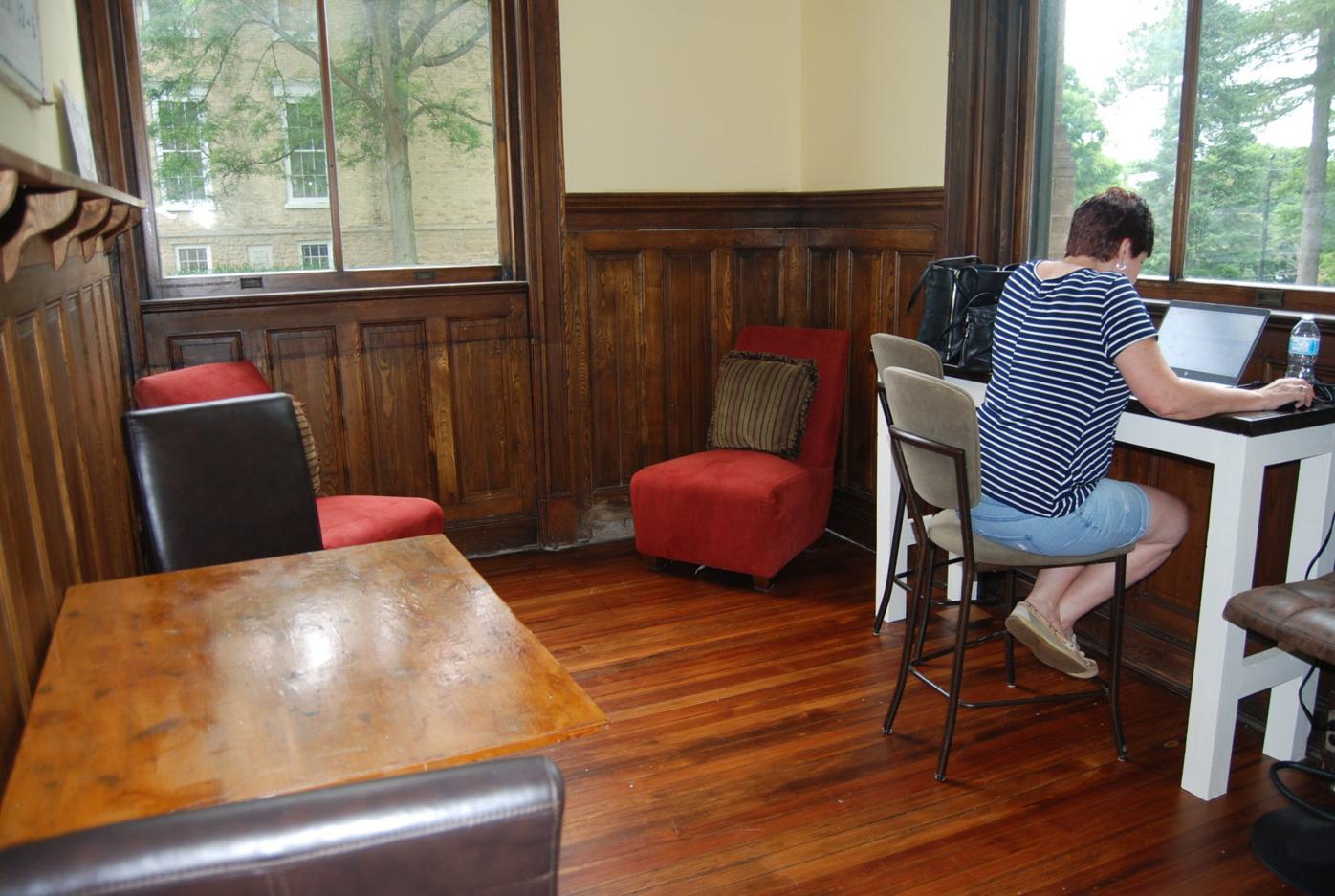 A customer works in the “Meeting Room” at Sharla’s Coffee Shop. The 200-square-foot space is available to walk-in customers or can be reserved in advance. 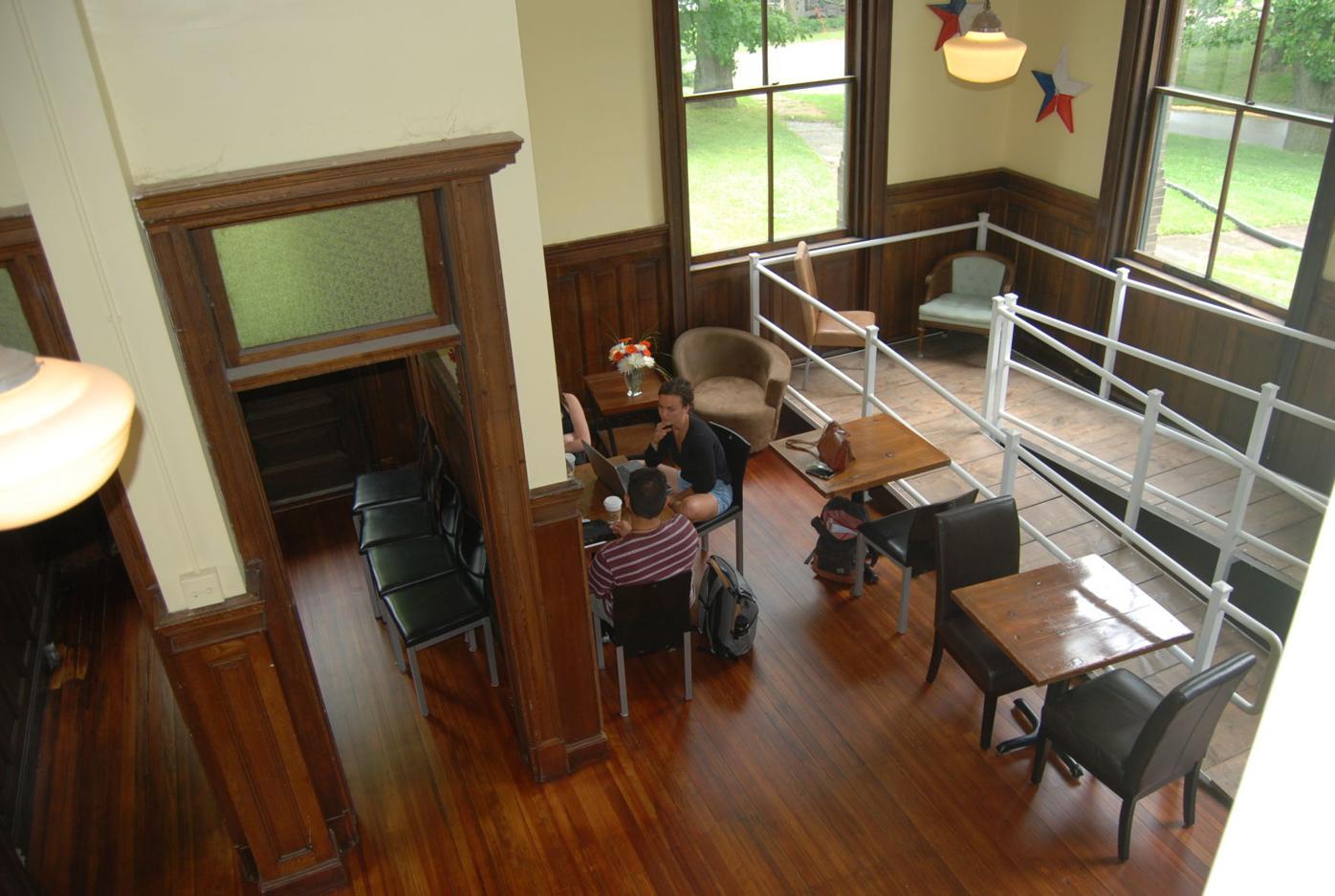 A view looking across the central space in Sharla’s Coffee Shop. Opened June 20, the new coffee shop offers a variety of hot and cold drinks, and has three varieties of its own blends including DNR, a breakfast blend, and Dave’s Power Blend, an espresso which comes both caffeinated and decaffeinated.

Space inside Sharla’s Coffee Shop is warm, open and inviting.

A customer works in the “Meeting Room” at Sharla’s Coffee Shop. The 200-square-foot space is available to walk-in customers or can be reserved in advance.

New York Times reporter Oliver Strand in 2012 identified Portland, Oregon’s coffee culture as among the most intimate and relaxed when compared to those in other major West Coast cities.

It’s a vibe Dave and Sharla Walker hope to bring to Milton. The couple opened Sharla’s Coffee Shop in the former Milton College library building, known as Whitford Memorial Hall, on June 20. The building, 525 College St., is located in the heart of the Milton College Historic District.

Dave is a Portland native and Sharla is a former resident. The couple moved from Portland to Madison in 2008. In 2017, they said, they went looking for a small town in which to raise their daughter, Fiona, now 8. They found Edgerton, Sharla said. For the Walkers, the community’s first appeal was the prominent placement of its downtown teen center.

Family is important, Sharla said, noting that her mother, a Portland resident, introduced her to Dave, and it was a desire to be closer to more family members that brought the couple back to Wisconsin. A native of Minnesota, Sharla said she moved with her family to Milwaukee when she was 16.

In Portland, Dave, at 19, joined the Navy. He trained in San Diego and was stationed at Pearl Harbor. He was a petty officer third class involved with anti-submarine warfare, serving between 1987 and 1990, he said.

While in the Navy, he was injured twice, first during a training exercise, sustaining trauma to his knee, and he was shot by friendly fire while stationed in Hawaii.

In Milwaukee, Sharla took classes at MATC, studying business education. She married in 1993 and gave birth to a son, Daniel, in 1995.

In 2001, she was a single mom, working for a marketing firm, she said, but even then, she dreamed of owning a coffee shop.

She next moved to Portland and worked as an account executive for a real estate magazine. She and Dave were married in 2004, she said.

On Friday, June 26, nearly one week after opening Sharla’s, the couple celebrated their 16th wedding anniversary.

Coffee was a huge part of the Portland social scene. The smell of the coffee and the ambience of the shop bring people together, Dave said.

After meeting Sharla, their tastes and aspirations merged, he said.

In 2017, Dave and Sharla began searching for a place to locate a coffee shop, they said. They thought perhaps a space in Newville, with close proximity to the interstate, might be best, but the right spot hadn’t presented itself, they said.

Sharla, then employed with Summit Credit Union, Edgerton, said a coworker suggested the couple look at space available in the historical Whitford Memorial Hall in Milton.

“We like historical buildings; it’s almost a requisite for a coffee shop,” Dave said.

“When we arrived, there were tables and paint and projects all over,” Sharla said. At the time, Maddie Strong Studios occupied the space.

The couple signed a lease in February and took possession of the suite in March.

Said Sharla: “When COVID arrived, we were very worried about it and concerned about what would happen. (Whitford Memorial Hall owner) Eric (Stockman) held the torch and kept us going. He kept asking: ‘When are you going to open?’

“And we’d say: ‘Dude, it’s COVID!’ But we kept going, just at a slower pace. Every weekend we were here, and then it all just started to come together.”

As they brainstormed, Sharla said, Dave envisioned selling coffee and smoothies, but finding space became an obstacle. While smoothies are listed on the menu, they remain a part of the business mix that’s still evolving.

“The whole shop is still evolving,” Sharla said. “We want to do a walkup window.”

Inside the shop, a tranquil, bright and open motif awaits visitors. The loft-style second floor, which is slated to provide additional seating, is not yet open, Dave said.

Defined by its wood tones, intimacy and upholstered seating, a 200-square-foot space, called the “Meeting Room,” can serve as work or event area, Dave said. The room is available to walk-in guests and can also be reserved in advance.

With COVID precautions in place, Dave said, the Meeting Room can hold between 4 and 6 people.

The shop currently practices social distancing, limiting the number of people within the main area to about 15.

Masks are optional, Dave said, adding he and Sharla wear them at the customer’s request.

For those looking to try something new, Dave recommends the affogato, which, he said, is espresso served with vanilla ice cream.

“The most popular item on the menu is nitro cold brew. It is made with nitrogen, which makes it more creamy and smooth,” Dave said.

Building the shop has been a family affair, Sharla said, and some menu items are named for family members. The “DNR” breakfast blend is named for Daniel and his fiancé Raquel. The couple plans to be married next February.

Fiona, too, has her own coffee, made with toasted marshmallow syrup, Dave said.

“We found a great roaster in the Rockford area,” Dave said. Sharla’s has three of its own blends: DNR brew and Dave’s Power Blend, which is an espresso, and comes in regular and decaf.

Sharla’s is open 6 a.m. -1 p.m. Monday through Friday, and 7 a.m. to 1 p.m. on Saturday. The shop is closed on Sunday. The shop will also open to groups by appointment.

“I can see doing a movie night,” Dave said. The couple plans to apply for a beer and wine license.

“We want to connect with the local winery and to do girly, and guy, things,” Sharla said.

Several customers visiting the shop have come from surrounding communities, and have a nice sense of or some form of attachment to Milton, Dave said.

“It has been an amazing experience to operate a small business here,” Sharla said of Milton.

A member of the Edgerton Chamber of Commerce Board of Directors and a fulltime employee with Guild Mortgage, Sharla said: “As members of the business community, I see us really supporting other small businesses. We want to support one another.”