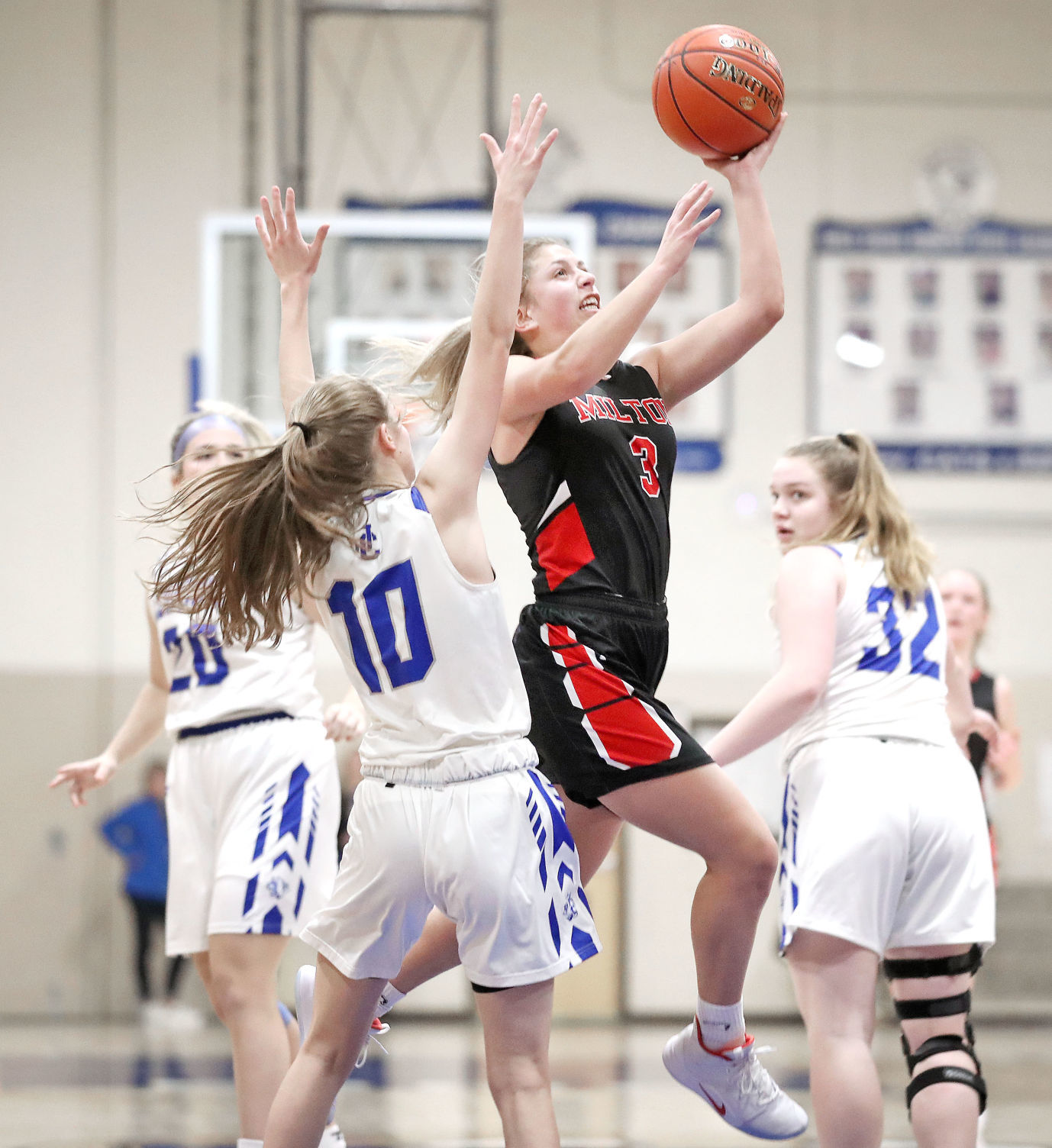 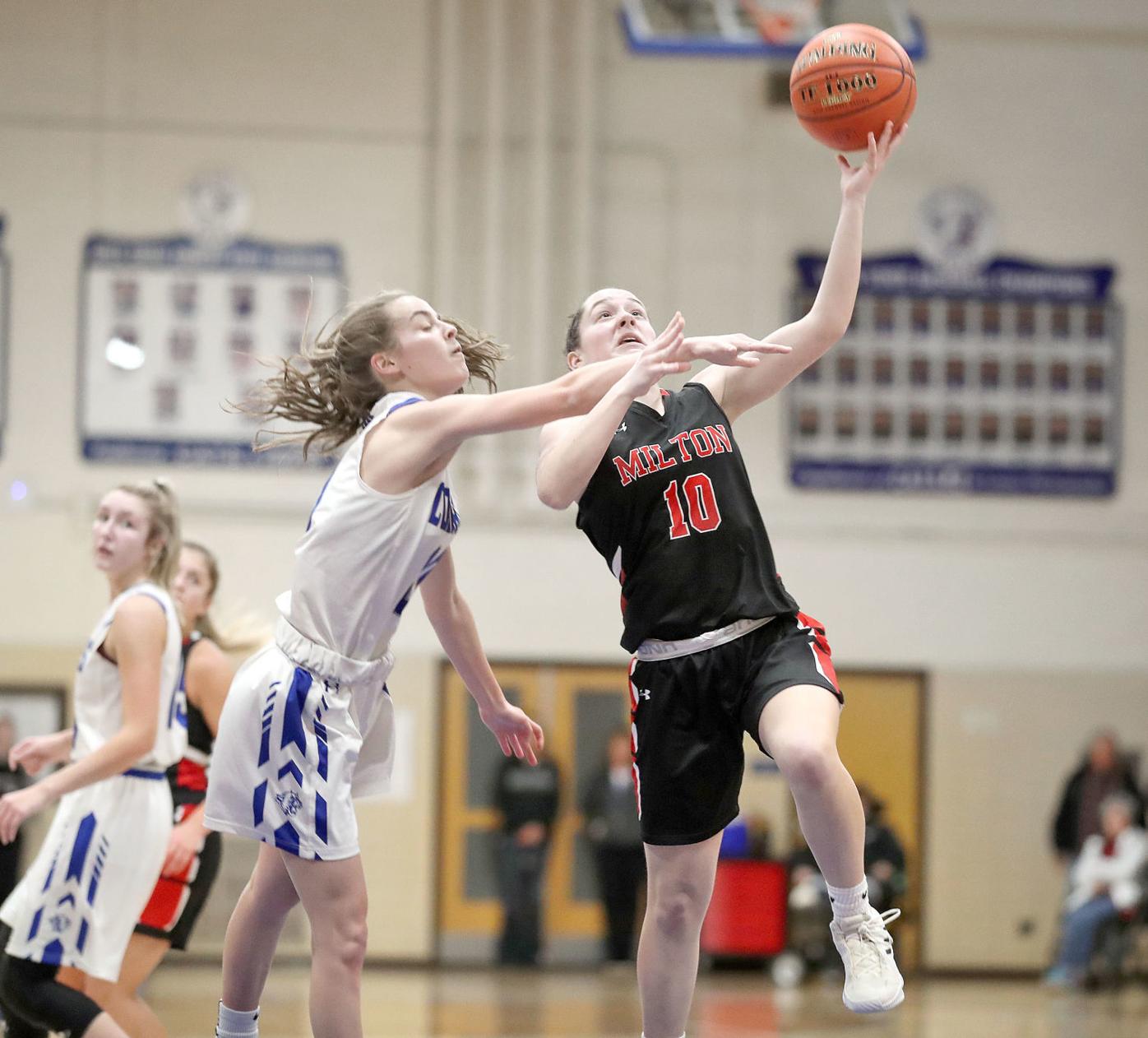 Senior Courtney Weberpal looks to score on a layup during Milton’s 68-52 defeat against Janesville Craig in the 2019 annual Janesville Optimist Holiday Tournament on Friday, Dec. 27, in Janesville. 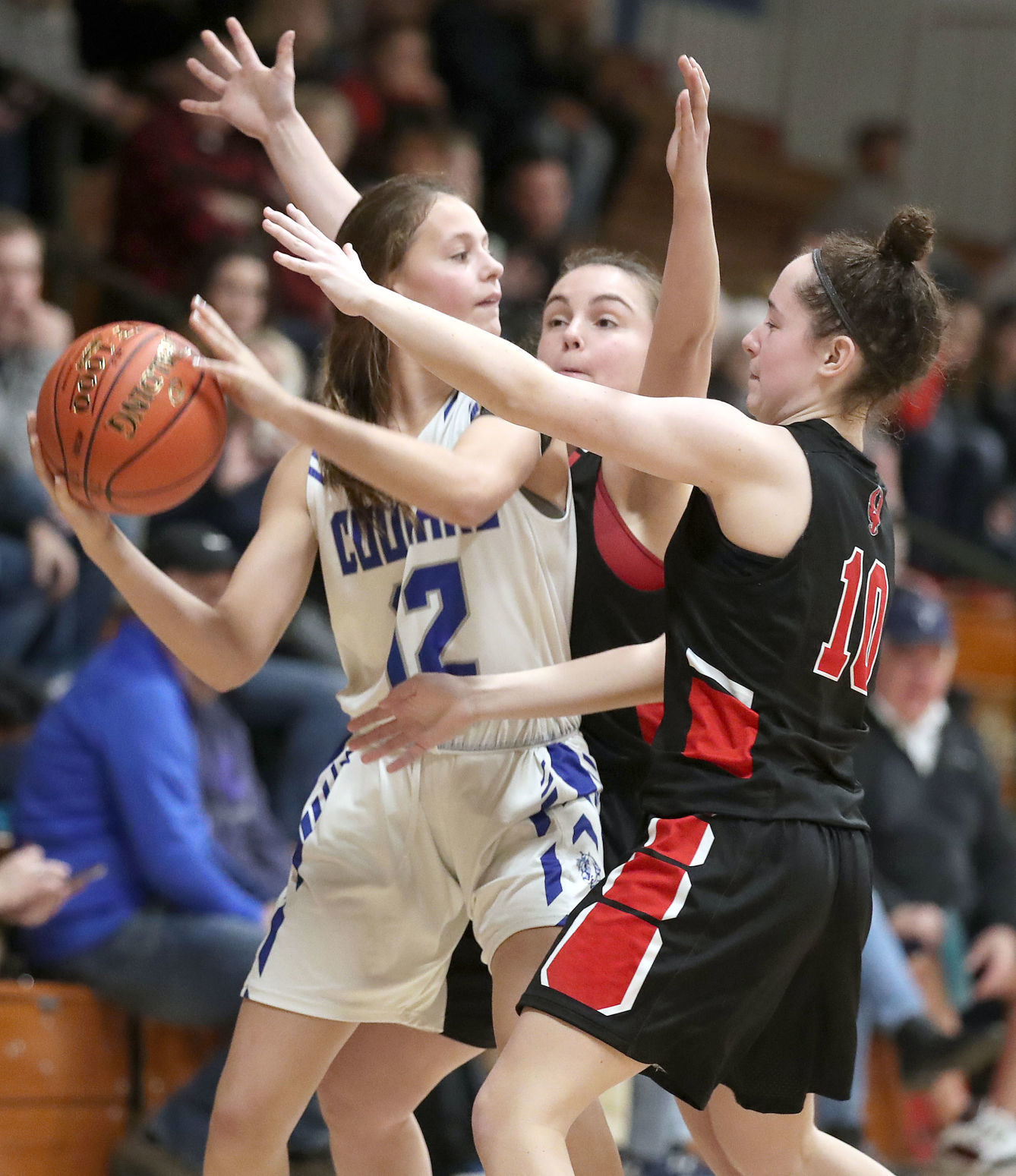 Junior Julia Steinke, behind, and senior Courtney Weberpal, try to trap the Cougars’ Ellie Maestro-Kennedy during Milton’s 68-52 defeat to Janesville Craig in the 2019 annual Janesville Optimist Holiday Tournament on Friday, Dec. 27, in Janesville. 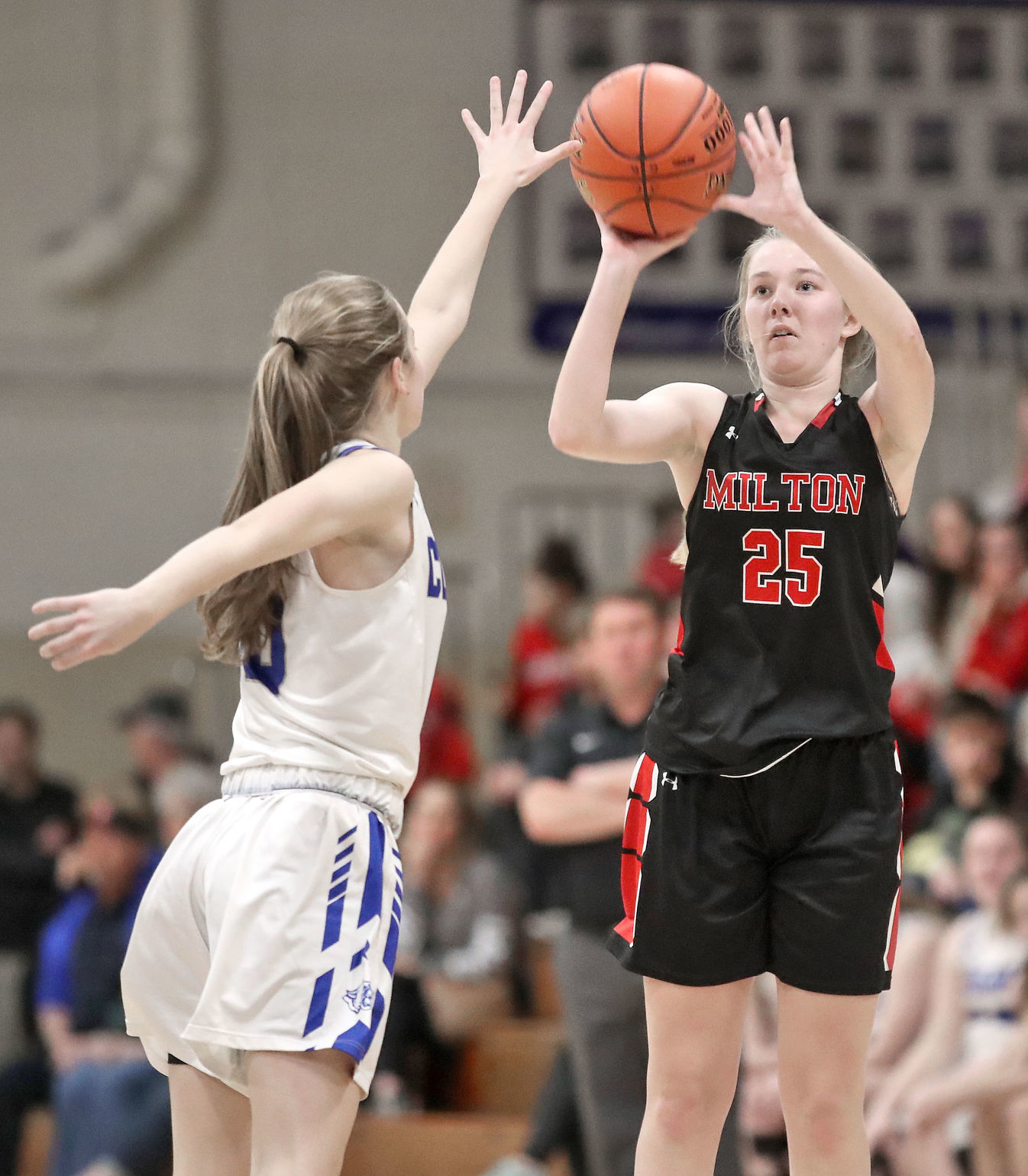 Senior Courtney Weberpal looks to score on a layup during Milton’s 68-52 defeat against Janesville Craig in the 2019 annual Janesville Optimist Holiday Tournament on Friday, Dec. 27, in Janesville.

Junior Julia Steinke, behind, and senior Courtney Weberpal, try to trap the Cougars’ Ellie Maestro-Kennedy during Milton’s 68-52 defeat to Janesville Craig in the 2019 annual Janesville Optimist Holiday Tournament on Friday, Dec. 27, in Janesville.

Janesville Craig’s girls basketball players knew they had given up too many first-half points.

And they had given up too many free ones, with visiting Milton going to the free-throw line 19 times in the first 18 minutes.

The Cougars turned up the heat when they came out of the locker room with a three-point lead. They scored 17 of the first 21 points in the second half, pulling away to a 68-52 non-conference victory in their own Optimist Classic tournament on Friday, Dec. 27, in Janesville.

“Second half, we just had to pick it up a little more,” said Craig sophomore Kate Huml, who scored a game-high 22 points. “I think we did a lot better on defense compared to the first half.

“In the second half, we played our game.”

Craig—now 7-2 after three straight victories—was up just 36-33 after a back-and-forth first half that included some foul trouble for the Cougars.

Milton (2-7) had a look at a layup that would have cut its deficit to one point on the opening possession of the half.

But that shot did not fall, and Craig got to the line twice in its first two possessions, scoring five points and forcing a quick timeout by Milton coach Stacy Skemp.

“We played a great first half of basketball,” Skemp said. “Then we came out, and I don’t know if we were complacent or just took a quick breath because we were in the basketball game. But you do that at this level against a good team, and three points is now eight points or 10 points in a big hurry.”

Indeed the Cougars built their advantage to double digits just 3 1/2 minutes into the second half, with junior Claudia Fieiras scoring eight of the team’s first 11 points in that stretch.

Her free throw made it 47-37 before senior Cassie Goswick buried one of eight Craig 3-pointers.

Huml followed with a three-point play to go up 16 with 12:54 remaining.

“We knew we didn’t play very well in the first half, and so we were actually pretty happy to be up by three,” Craig coach Kerry Storbakken said. “These girls, I think they believe that we can be a pretty good team but that we didn’t play our best basketball. Then, in the second half, we go on a couple runs.”

The first one coming out of halftime was all Craig needed.

The Red Hawks never got closer than 13 points the rest of the way.

Fieiras finished with 17 points, and Craig had five players make at least one 3-pointer.

Craig held Milton to 5-for-31 shooting from the field in the second half.

“We weathered some foul trouble; Claudia sat a lot in the second half with four, and she sat in the first with three,” Storbakken said. “Weathered the foul trouble and started making some shots. It was another good win.”

Abbey Falk had seven points each half to lead the Red Hawks with 14. Senior guard Shelby Mack-Honold had 11 of her 12 in her team’s solid first half.

“I keep telling these girls we are a great basketball team, but we haven’t put two halves together yet,” Skemp said. “And because our schedule and our conference are tough, you have to be able to do that.

“The first half, we shared the ball the best we have … and that’s great to see. So I know we can do it, it’s just finding that second half and finishing strong.”

Milton will take on Stoughton in a Badger South Conference game Friday, Jan. 3, in Stoughton at 7:15 p.m.