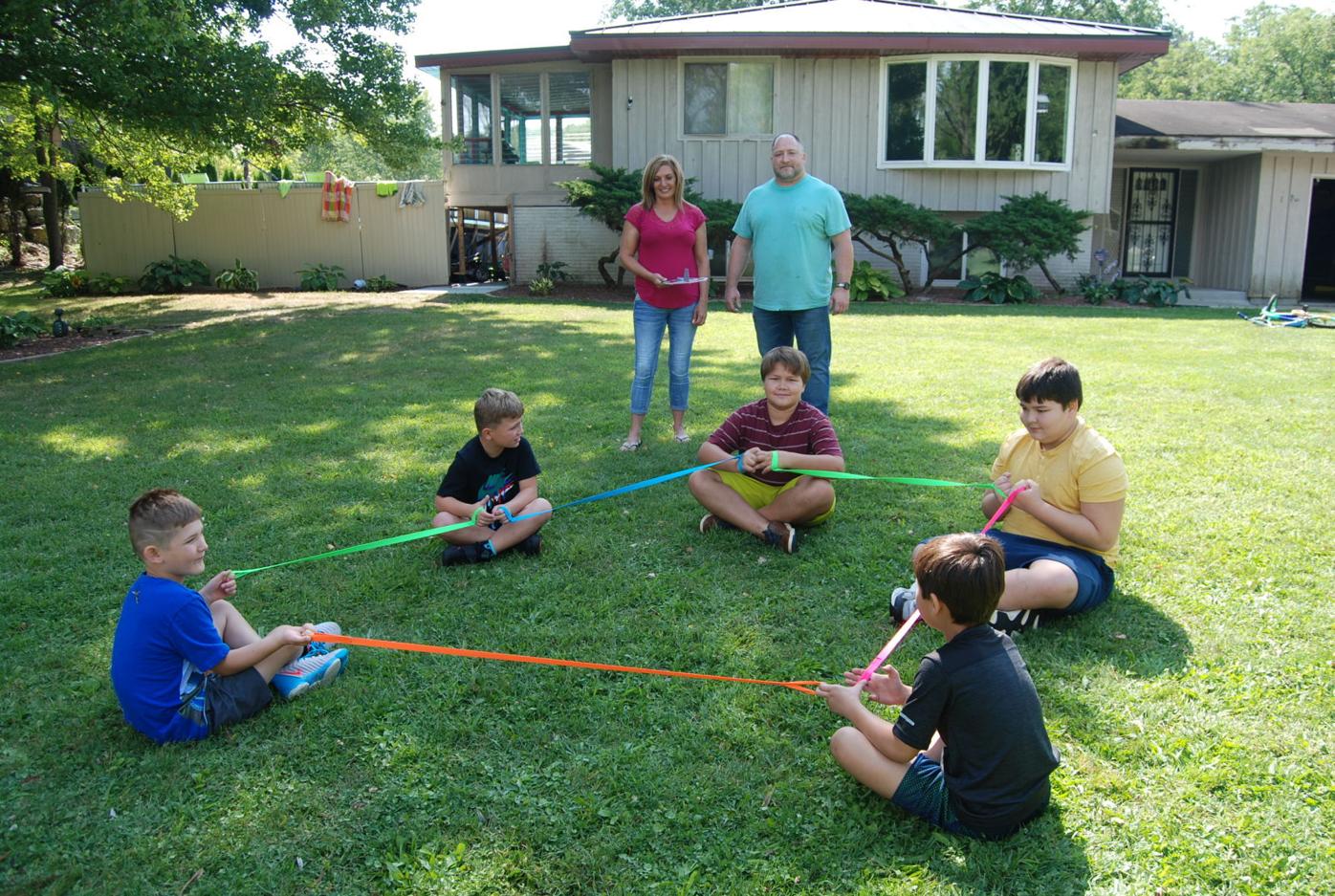 Sherry Garrett, standing, at left, and Neal Crabtree, both parents of Milton school district students, organize an outdoor game as part of a newly created pod. The two plan to homeschool their children this year and use the pod to facilitate learning. 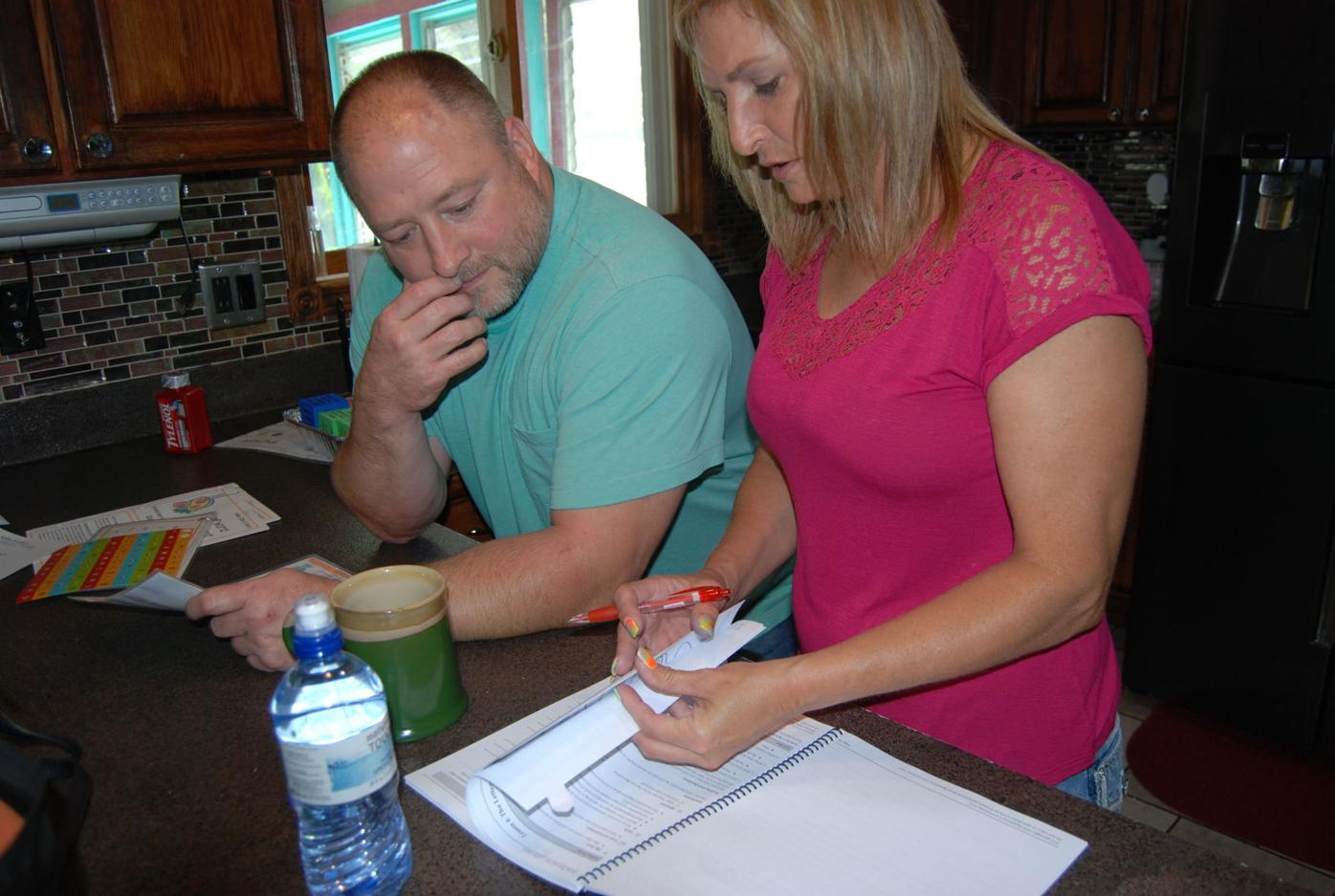 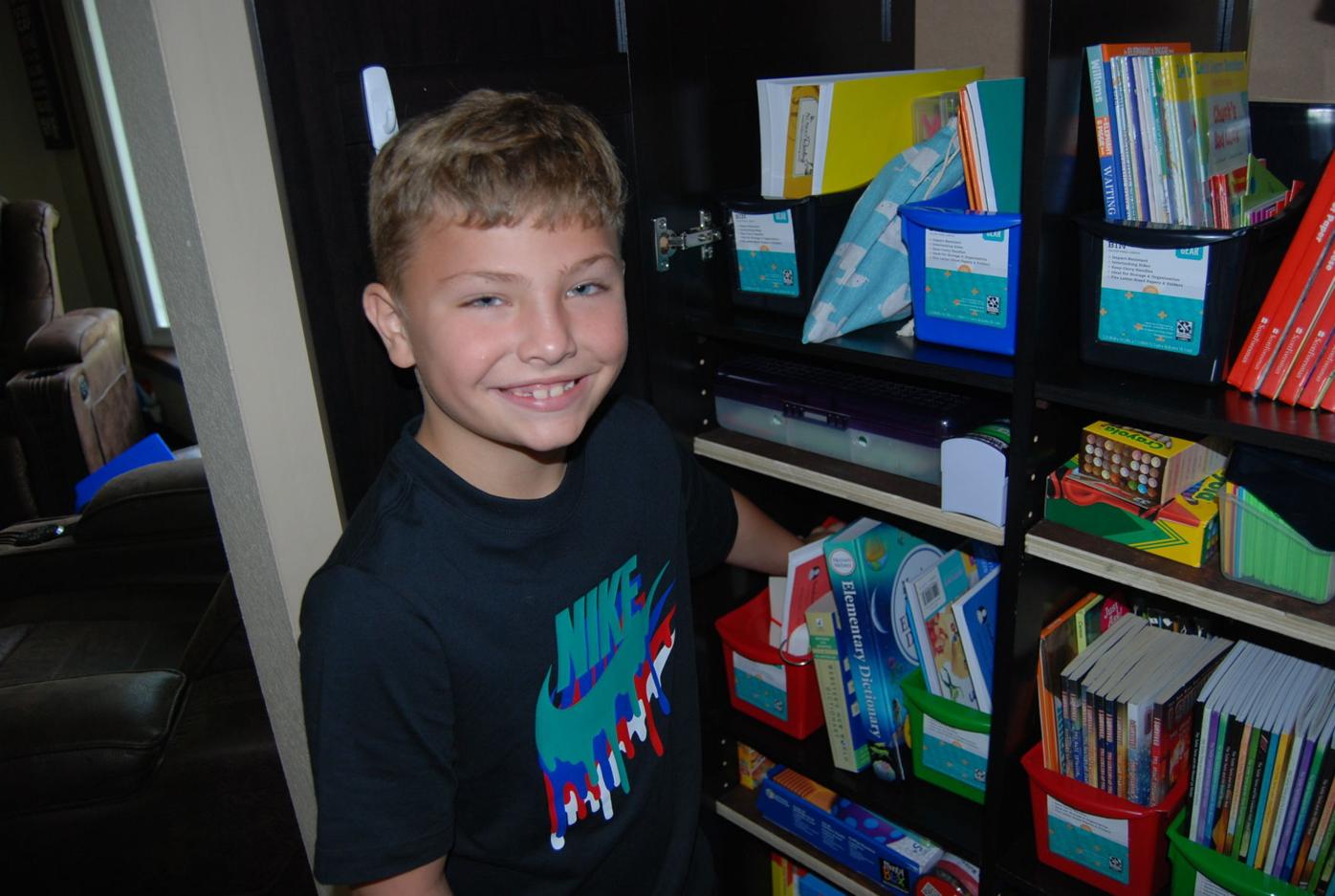 Hawk Garrett, 8, looks in the supply cabinet for his learning materials. 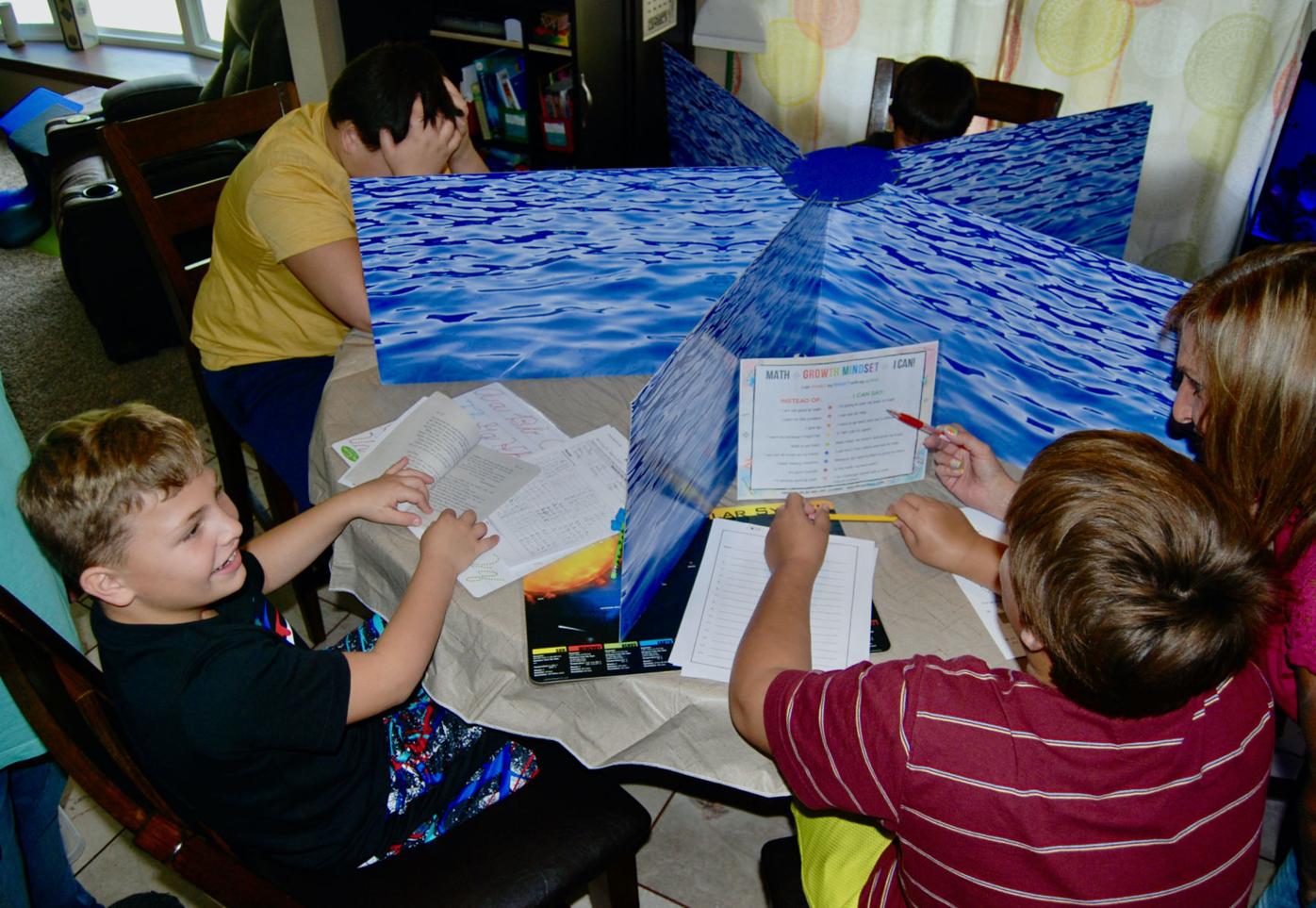 Five Milton school district students, all of whom will be homeschooled this year, take assessments provided through purchased curriculum to determine for each where best to start the year’s learning. The pod held its first session Monday, Aug. 31.

Sherry Garrett, standing, at left, and Neal Crabtree, both parents of Milton school district students, organize an outdoor game as part of a newly created pod. The two plan to homeschool their children this year and use the pod to facilitate learning.

Hawk Garrett, 8, looks in the supply cabinet for his learning materials.

Five Milton school district students, all of whom will be homeschooled this year, take assessments provided through purchased curriculum to determine for each where best to start the year’s learning. The pod held its first session Monday, Aug. 31.

Sherry Garrett, an Edgerton resident and the mother of Hawk, an 8-year-old former Milton West Elementary School student, knew she was breaching new territory when she began searching the internet for homeschooling curricula and a tutor. Both were components she said she hoped could be incorporated into a “learning pod,” a tool embraced by parents during the COVID-19 pandemic to facilitate learning and occupy an educational space somewhere in-between virtual and in-school options.

“I saw news articles on Facebook about pods. They were being discussed in places like New York and California. Kids and parents were getting together, which helped with the social aspect, and the kids could learn from each other,” Garrett said.

Pods center around small groups of students, often aided by a tutor, and can be used in conjunction with homeschooling or a district’s virtual program, she said. In the pod formed by Garrett and several area families, there are students using both homeschooling and district-provided virtual learning curricula.

On Monday, Aug. 31, the results of her search were taking full form as five children, including her son, were deep into assessment testing at her dining room table. The testing was part of the first day of learning within the children’s new pod. All five children undergoing the assessment process will be homeschooled this year.

Said Garrett: “I’m very excited about how this will turn out. I know the first few weeks will be crazy because the kids will need to get into a routine, so the first couple of weeks will be a challenge, but then I’m excited to watch the kids grow and succeed.

“At the end of the year, there will be an assessment test. We will see how it goes this year and then reevaluate it.”

Garrett said she began exploring pods, and tutors, about three months ago after reading about the idea online and because her son, whom she described as having special learning needs associated with ADHD and sensory disorders, did not fare well using district-supplied virtual learning last school year.

When her child was in school at Milton West, Garrett said, the school “did amazing.” She was very happy with the education her son was receiving and the extra effort made by teachers to accommodate his special needs.

“I hate that he can’t go back, but COVID and virtual learning are not good for him. It’s sad because he liked his school,” Garrett said.

Last year, Garrett said, when Hawk received lessons virtually: “That was not working for us. My son was no longer reading a book. They used the computer for everything, so he wasn’t spelling or writing. He would just ask Siri because Siri could do it all for him. He was falling behind,” she said.

When plans this year for schools to reopen called for masks and social distancing, Garrett said her son would likely be unable to follow the rules.

“He won’t tolerate masks or even sitting still. He has no perception of being in someone’s space. In his environment, he needs reassurance through hugs and touch to keep him confident and motivated,” Garrett said.

With COVID, Garrett said: “We have family members that are high risk, so we keep him close to home.”

This year, Garrett said, she and her husband, Guy, decided to try homeschooling.

Garrett said she and her husband own a fiber optics installation business which allows them flexibility in their schedules. Garrett works primarily from home performing administrative tasks and Guy works in the field. Both will be involved with the pod, Garrett said, although she will assume the larger role.

While exploring the homeschool option, Garrett said, she also decided to look for a tutor. She placed an ad through a Facebook forum, called Facebook Marketplace, looking for a student studying to become a teacher, or a retired teacher who might like to earn a few dollars within a pod structure.

“I had some responses and while I was searching, I had other parents reaching out to me. They knew me through school or sports and they wanted to see if they could split costs,” Garrett said.

Neal Crabtree, a father of four students within the Milton school district, was among those who reached out, she said. He, too, will be homeschooling this year and his three sons, Clayton, 11, Calvin, 10, and Charlie, 6, were among those undergoing assessment testing at the dining room table on Aug. 31.

Crabtree has a daughter, Avileen, 4, who will likely join the pod, but, for now, he said, she will be taught individually at home by he and his wife, Nantana. The decision was made to give her individualized attention because of her age, Crabtree said.

The Crabtrees own a Delavan-based metal finishing business, and together share business obligations, which allows scheduling flexibility. Garrett and Crabtree will work together to facilitate the pod and hope, they said, they eventually will be joined by other pod parents and a hired tutor.

A fifth child, Sawyer Tafoya, 6, is also a pod member and is Garrett’s grandson. Sawyer has a sister, Maybelle, 4, who, like Crabtree’s daughter, is being taught at home for now by her parents because of her age. She will likely join the pod at a later date, Garrett said.

At least two other families, also within the Milton school district, who have opted for virtual learning this year, will likely join the pod periodically to help enhance the at-home experience, Garrett said. They will come to the pod throughout the school year, and are taking some time to let their kids adjust to the virtual program before adding another layer, she said.

When the virtual learning kids come, they will “touch base” with the other pod members, read books together, and use the pod as a study group space, Garrett said.

Several of the children in the pod have special needs, ranging from ADHD to autism, Garrett said.

During lesson time, Garrett said: “Kids will get multiple breaks.”

With special needs, she said, “Our kids are very good at telling you when they need a break.”

Within the families that joined, typically at least one parent is working from home, she said.

With a handful of interested families, Garrett said, the group of parents began communicating first online and then through in-person meetings. The homeschooling parents decided to purchase common, yet age-appropriate, curricula to provide consistency and continuity, Garrett said.

“We decided we would order our home school curriculum together,” Garrett said. Each family paid for the supplies their children would need.

To find curriculum, she said, she researched options online and talked with area homeschooling groups and parents. She visited homeschooling Facebook pages. She purchased materials called “All About Reading,” and “All About Spelling.” Kids in the pod are at grade levels between preK and sixth grade.

“I found programs in handwriting, spelling and reading put together by a former occupational therapist called ‘Learning without Tears,’” Garrett said.

“We are using a curriculum called Saxon Math,” she said.

“Each of the kids are at a different level of learning, so we did a pretest with the curriculum to see where each child was at,” Garrett added.

Garrett and Crabtree next turned their attention to creating learning space, with Garrett opting to transform her dining room into a dual-purposed space in which pod students will learn reading, language and emotional development.

Garrett is using a color-coded shelving system, where each child will have a color and find their books and other learning materials on their shelf.

Crabtree has converted a bonus room in his Milton home into a classroom in which pod students will learn math, science and social studies.

To keep students engaged, Garrett has outfitted her home with portable desks and manipulative devices, so students can change scenery, lay on the floor and read or keep their hands busy, which helps some students concentrate.

The addition of a tutor

While online, Garrett said, she made connections with potential tutors, including a retired teacher, two students learning to be teachers who were still in college, and one student who had finished school and was looking for a job. All were local, she said.

She said the candidates seemed to be interested in making between $15 and $20 per hour.

As of Aug. 31, Garrett said: “We are still working out the details, but we think we would like a tutor to come for a couple hours at least two days a week. Perhaps about two to three hours each day.”

The parents plan to give the kids a few weeks to develop homeschooling routines and then introduce the tutor, Garrett said.