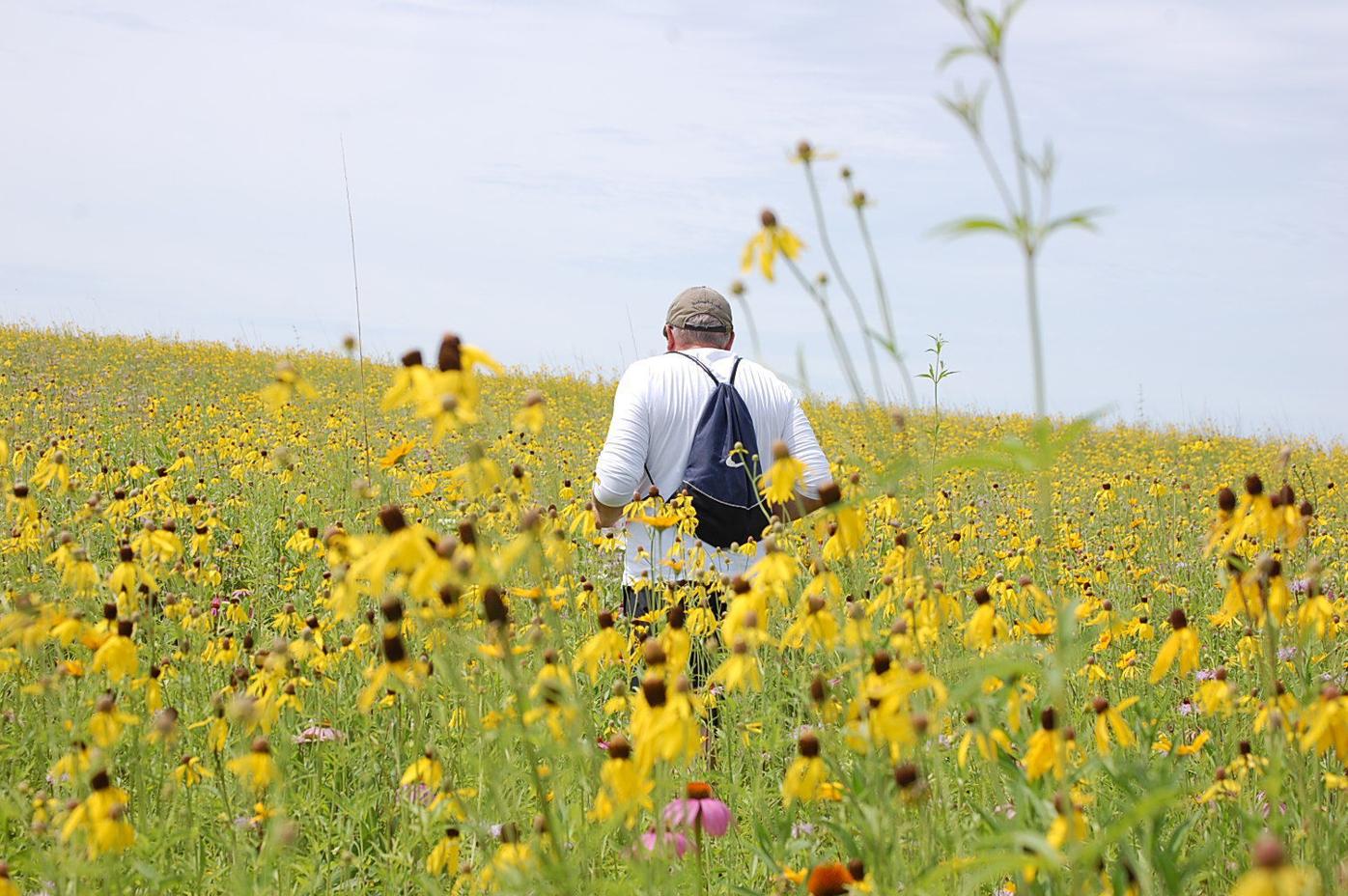 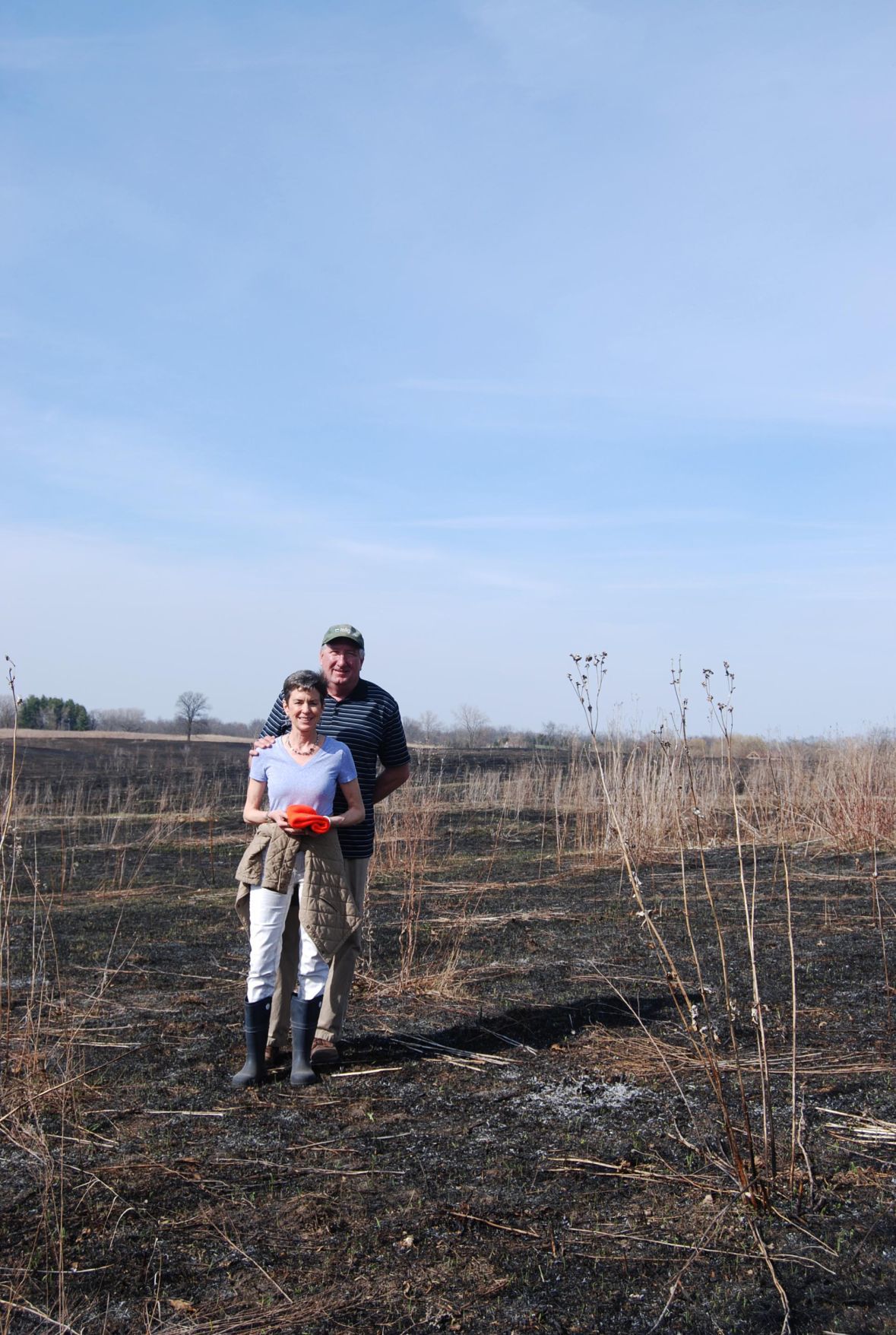 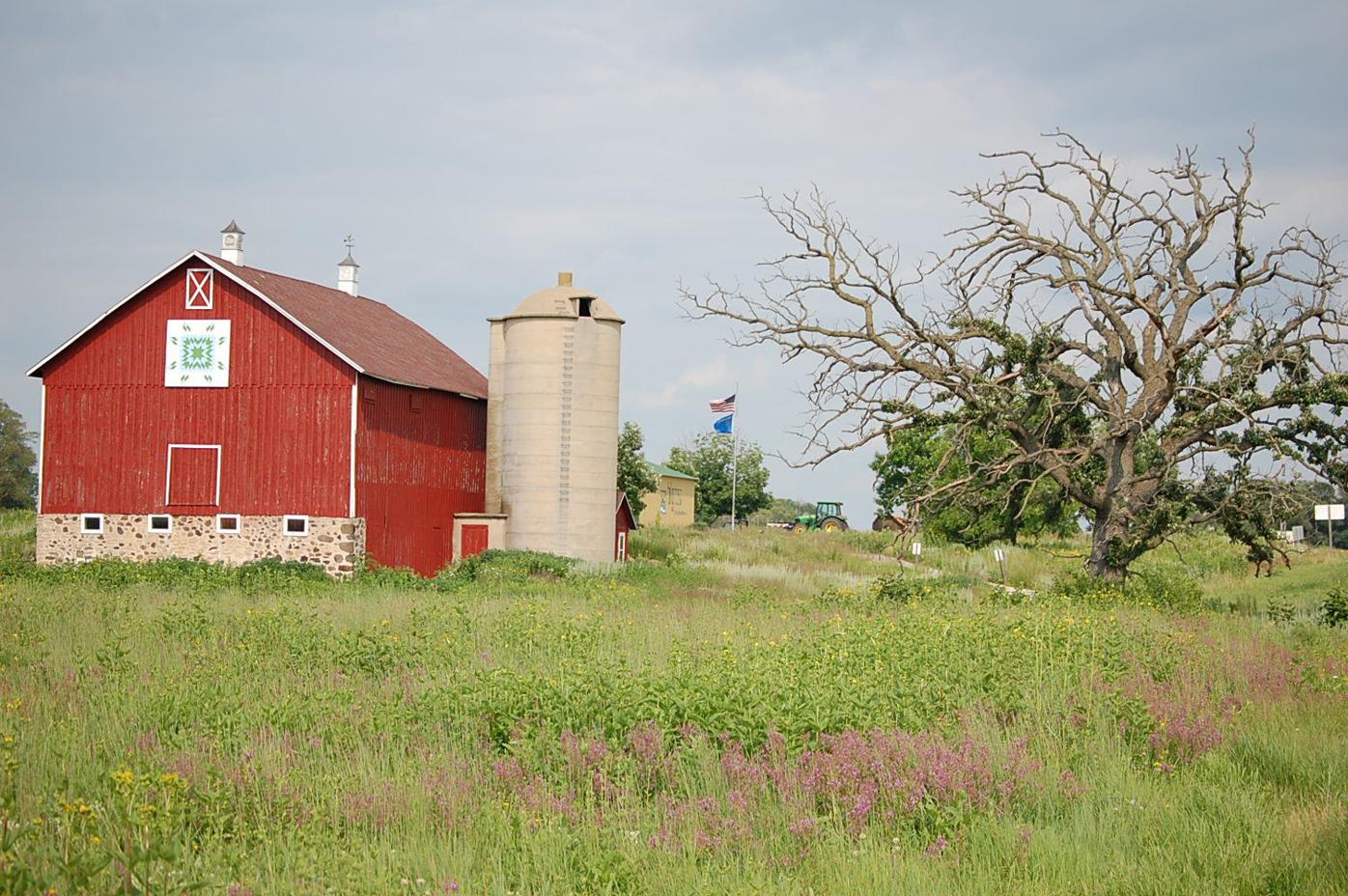 The red barn at Tallgrass Restoration LLC, 3129 E. County Road N, is the last original building from the Kidder farm. Plans call for the structure to become community and educational space by next summer.

The red barn at Tallgrass Restoration LLC, 3129 E. County Road N, is the last original building from the Kidder farm. Plans call for the structure to become community and educational space by next summer.

Annually, one-third of the location’s 225 acres is burned, company Chief Executive Officer Peter Layton said. The strategy is an attempt to recreate a natural phenomenon: before European settlement, when indigenous vegetation dominated the area, lightening strikes ignited the prairie.

“These grasses are developed to burn,” Layton said, pointing to the tall, indigenous, plants, known for their deep roots.

Under natural conditions, the entire prairie would burn about once every three years. His goal is to create prairie habitat and use controlled burning techniques to maintain its health. A rotating schedule is used, he said, to help maintain some vegetation for wildlife.

With a total of 400 acres in parts of Rock County and Illinois in his care, and defining himself as a steward more than owner of the land, Layton said: “If I own it, it’s in prairie.”

Spending his formative years in the Chicago suburbs, and professionally engaged, beginning in the 1980s, in the world of finance, Layton said: I was on the Chicago trading floors for a long time and I started to develop an appreciation for open spaces so I started looking for a place to escape.”

For years, Layton said, he ran a small ad in the Milton Courier, which read: “looking for land to buy.” In 1993, he purchased a home on Lake Koshkonong and began visiting it on weekends. A few years later, Layton said, someone responded to his ad.

Layton’s first purchase, made in 1999, was a 50-acre parcel along County Line Road and Old Highway 26. Wells drilled on the property were meant to monitor a pumping station located on adjacent land. With clean water and the natural setting, Layton was inspired to return the property to pre-European condition, which, he said, meant returning the land to natural vegetation, including hardwoods like burr oaks and hickory trees, and deep-rooted indigenous grasses. These were the plants that would have thrived before Europeans began tilling the ground, Layton said.

Land known today as the Milton Tallgrass Restoration LLC site, 3129 E. County Road N, was purchased in 2003. Before his purchase, Layton said, the property was locally known as the Kidder farm.

Alerted by members of an area chapter of the National Audubon Society that the Kidder farm would be sold at auction, Layton said, the society had identified the property as one of environmental sensitivity. “We heard you’re nice to land,” Layton said a society member told him, after which the group suggested he might purchase the property and hold it until a grant could be secured or buy it and see that it would not be developed without acknowledgement of those sensitivities, he said.

“I have a very strong notion about people stepping up to be stewards of land like this,” Layton said.

Layton purchased approximately 180 acres from the Kidder family as well as an additional adjoining acreage from the Loofboro family for a total of 225 acres. Soon after his purchase, Layton said, he established a conservation easement on two-thirds of the land.

In describing the Tallgrass property, Layton said: “This entire area is a flowage to Lake Koshkonong. We have some wet areas that are not officially wetlands.”

Tallgrass Restoration LLC germinated as an idea, Layton said, while he was restoring the original 50-acre parcel. He began meeting people in the conservation industry.

What he saw, he said, was a fledgling industry that, with some capitalizing, could, though economies of scale, be made more efficient. In 2003, he said, he purchased an Illinois-based restoration company with which he’d become familiar while restoring the first 50 acres. In that company, he said, he saw a good idea that was under-capitalized, so he bought it, capitalized it, and then added people.

Tallgrass Restoration President Ron Adams said he tells customers that the company has been operating under its current name since 2004, the year that the Schaumburg, Ill., headquarters was opened. The Milton office opened on the Kidder property in 2005.

Founded in 2008, Tallgrass Group serves as the administrative arm and has offices in Arlington Heights, Ill., Layton said. The company has another branch called Tallgrass Land Conservation LLC, described by Layton as a wetlands bank.

“We are in the business of making wetlands,” Layton said, noting that his wetlands project began with the purchase of 115 acres along the Rock River in Afton, Ill.

Layton is a graduate of the University of Chicago, holding a bachelor’s degree in economics earned in 1982, and a master’s in business administration, concentrating in finance and statistics, earned in 1987.

He has enjoyed an expansive career in finance, investing and trading, having affiliations with such companies as Merrill Lynch, Chicago-based Hull Group and Goldman, Sachs and Company, as well as serving as a research director on the Chicago Board Options Exchange. In 2014, he was described in Crain’s Chicago Business as an “electronic trading pioneer.”

Splitting his time between Chicago and Milton, Layton said, he has not left the financial world: he has partnerships and affiliations with several firms that trade financial products, including Whitewater-based Blackthorne Capital Management and Warhawk Fund, and Illinois-based Efficient Capital Management. He is also chairman of BOX Options Exchange, LLC, and serves as a member on several boards, including Chicago Wilderness Trust, College Visiting Committee at the University of Chicago, Nicholas School Board of Visitors at Duke University and the Global Business Resource Center Advisory Board at UW-Whitewater, among others, information of the Blackthorne website states.

Of himself, he said: “I’m a big believer in capitalism. I’m an investor, but I build businesses through cash, monitoring or strategic planning. I like to build land conservation businesses,” he said, adding, “I do it because I’m amazingly inspired to walk through and watch the land and indigenous plants rejuvenate themselves. I believe in climate changes, and that we’re better off with cleaner water and air, and those things make for a better quality of life. Economic health and environmental health go hand-in-hand,” he said.

‘This is the model’

When Europeans settled the land, Layton said, without machinery, the easiest to till was wetlands. When he purchased the Kidder property, he said, “(agricultural) drain tile was everywhere. As farmland comes out of production, it makes sense to get the wetlands out of production.

“So I bought a couple of farms and made Tallgrass, and then I became their best client,” he said. He purchases services from the company he owns because “I don’t what them (employees) to be less willing to work on my own land than for land owned by other clients.”

Pointing to surrounding prairie, Layton’s wife, Meg Schmitz-Layton said: “this is the model.”

“I like to say that this is a gigantic billboard,” said Layton.

Returning to prairie makes economic sense, Layton said. Money is saved though ease of care, and corporations on campuses can make trails and recreational opportunities for employees, he said.

“When we are taking over a farm field that’s clean,” Layton said, it costs between $1,000 and $4,000 an acre depending upon seed mixes selected.

There are three types of basic seed mixes: wetlands, woodlands, and uplands, he said. “The earth has prairie seed in it, so you can just start burning periodically, too,” he added.

The basic process, Layton said, is to kill existing vegetation. The company does use some herbicides to facilitate that process. Then add seed, followed by mowing and plant care. On the third year, the burning process begins.

Those interested in learning more can contact the company for a land evaluation (tallgrassrestoration.com). Many prairie plants grow tall, Adams said. Homeowners should check to see if local ordinances allow for tall and densely growing plants. Some communities have burning restrictions, too, he said. Residents and landowners should check local burning ordinances before calling for an evaluation, he said.

Said Layton: “I often ask: Why hasn’t this taken over the world?”

Tallgrass to expand its Milton location

"Why hasn’t this taken over the world?”

The Rock River School, built in 1941 and located until Saturday at the corner of County Road N and State Road 59, closed its doors in 1965, bu…