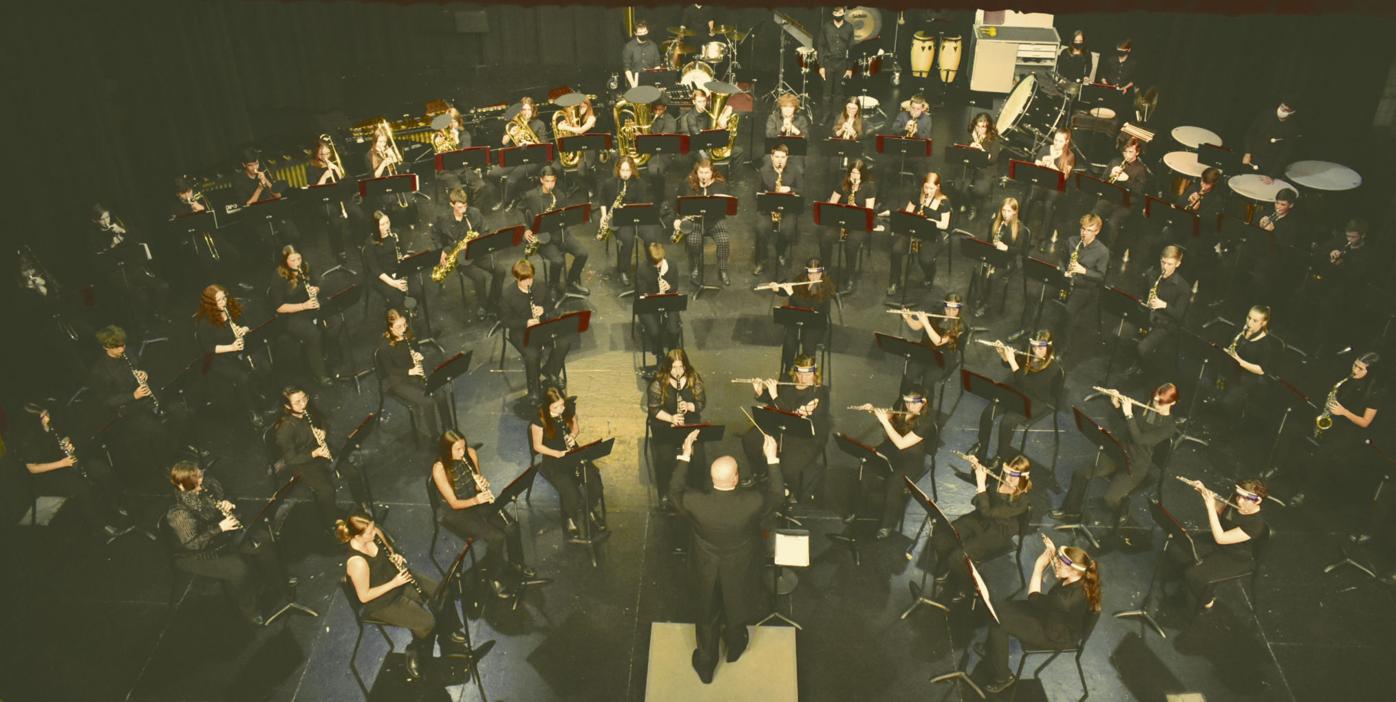 Milton Director of Bands Nathan Pierce directed the band for the last time last week in concert in the auditorium. He is leaving for Cumberland after the Milton graduation ceremony. 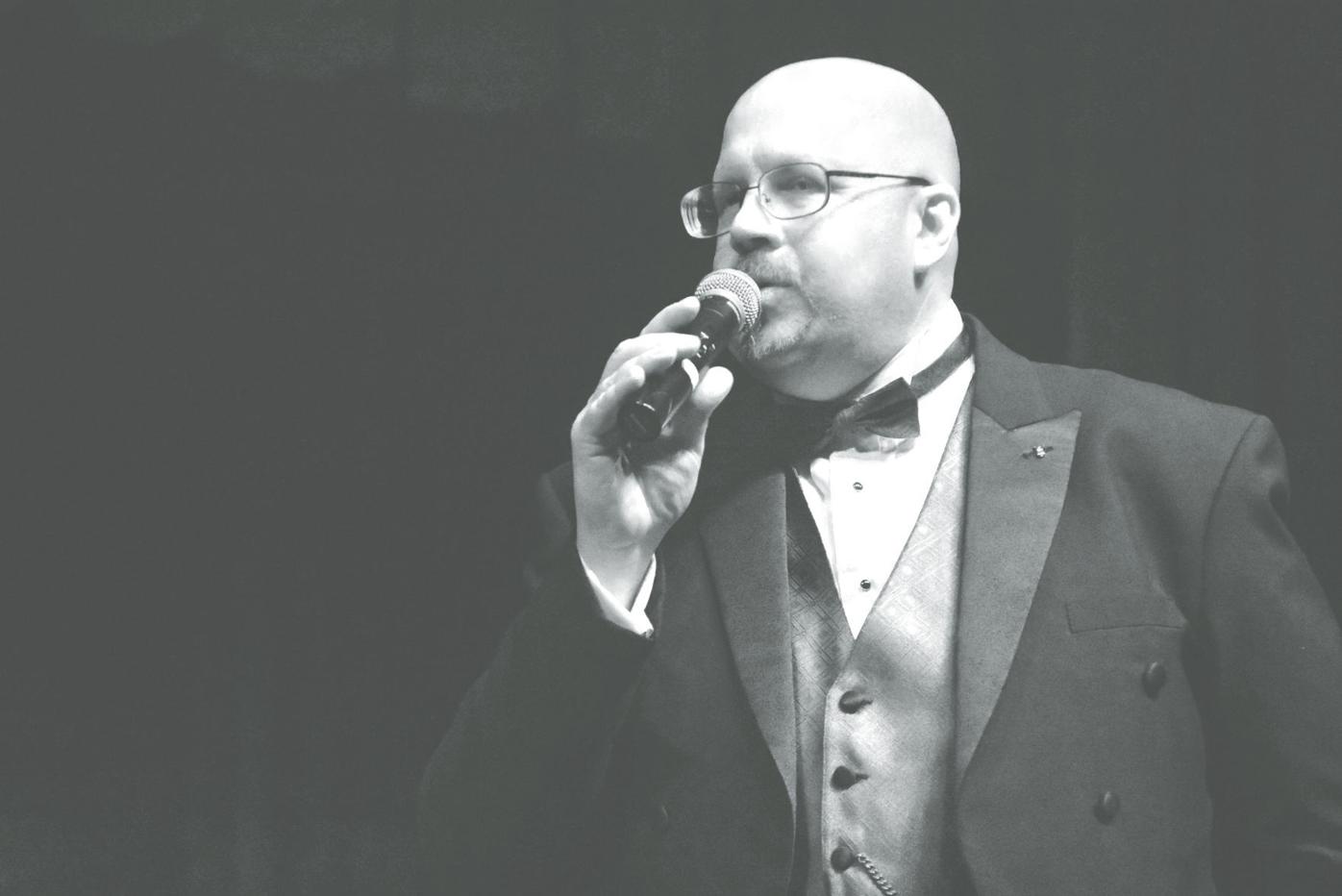 Milton Director of Bands Nathan Pierce directed the band for the last time last week in concert in the auditorium. He is leaving for Cumberland after the Milton graduation ceremony.

Milton watches high school band members march in the July 4 parade for four years, then they graduate and new students put on their uniform jackets.

For 12 years, Milton High School Red Hawk Marching Band Director Nathan Pierce has walked in the parade alongside them. This year, he, too, will be done at MHS after graduation.

The Milton Courier interviewed Pierce as he was packing up his office last week.

At the suggestion that the community had gotten used to seeing him in the parade and he had become an icon, he countered that the band itself is an icon, and he just tries to blend in.

But didn’t he sometimes wear a red suit jacket? He did.

By “blend in,” he means blend in with the band dressed in red, black and white jackets. Many of the uniforms are now 20-plus years old and once were worn by the Dubuque Colts Drum and Bugle Corps. Others were new about four years ago. Pierce also has been known to wear a fedora and other types of hats.

In his office, there were at least four including a Red Hawk baseball cap and a conical hat made of straw or maybe bamboo.

His hat habit began about 10 years ago when he started shaving his head.

“Otherwise, I’d get sunburned. It’s a practical thing,” he said.

It’s also about setting an example, he said.

When he directs concerts, he wears a tux.

“When we’re out in public and we go to state, I wear my formal jacket and hat,” he said. “I try to look good. I try to put the kids in the right frame of mind so that they are already prepared mentally before we even step foot on the field. Ninety percent of this game is mental. If you’re not mentally ready, you’re not going to perform well.”

When Pierce arrived at MHS, he said band wasn’t as popular as it is now.

“I spent a lot of time trying to make it socially acceptable,” he said.

He scheduled the band to play not only at basketball and football games but at wrestling meets, volleyball matches and even swim meets.

“The athletes that are in the other sports that aren’t in the limelight all the time really appreciated the fact that we took the time and went to their games,” he said.

Unlike show choir at MHS, he said band 12 years ago wasn’t a popular thing to do in Milton.

That’s not to say the band didn’t previously have success and notoriety under longtime directors Ken DeVoe and Richard Dabson. In fact, in 1961, the Milton Union Marching Band, under the direction of Dabson, performed at President John F. Kennedy’s inauguration parade.

Stability can be key to success, Pierce said and the Milton band program has had that stability. Band teacher Jessica Westlund was teaching at Milton Middle School before Pierce arrived and many members of the high school marching band staff have been with the program about 10 years.

“I owe a tremendous debt to the staff I have – you can’t do this job yourself,” he said. “You rely on others, and you bring in people that are better than you and that’s how the band gets better.”

“The music kids are used to competition because of the show choir,” he said. “I didn’t think it would be a stretch to start competitive marching.”

In his first year at MHS, the marching band performed at half time during home football games. The second year, the band participated in one field show in Fort Atkinson. Milton might have placed last, but for Pierce that wasn’t the point.

“The object was to get the kids to buy in to what we were doing,” he said. “They saw the other bands and they saw the potential of what we could do here.”

From there, the Red Hawk marching band started marching in more shows and in its third year, the band competed at state.

“I was asking the kids to do things they had never done,” he said. “Each year we got better and better and they got closer to the other groups in our class. Once they figured out that we had the possibility of being as good as all these other bands, that’s when we started getting really good.”

His voice could be heard in the community with or without a bullhorn during marching band season. He had high expectations for his students, used different approaches to coach them and was referred to by some as a cuddly porcupine.

He mentioned the cuddly porcupine reference but he didn’t mention School Band and Orchestra Magazine named him one of 50 Directors Who Make A Difference.

Highlights during past 12 years are many, but his highlights are about the band, not him.

But, he said most important, and it’s not something that gets a lot of attention, is the way the concert bands sound.

Milton typically has had four to six of its groups qualify for the state solo and ensemble festival.

This year, 101 students were in band but there wasn’t an in-person festival due to COVID.

Next year, the band will have maybe 105 students.

Already there have been preseason camps.

“The band’s going to be good next fall and give River Falls and the Waukesha schools a run for their money,” he said.

They didn’t march last year. Milton did and was one of more than 100 schools nationwide to compete in the v-USBands virtual performance season.

“We’re ahead of the game – and I hope they stay there,” he said.

So far, Pierce said the band sounds really good playing Queen, Disturbed/Simon & Garfunkel Disturbed and Cold Play – music that’s more contemporary than what the band’s played in the past.

The new director of bands Nathan Czech starts Monday. Pierce speaks highly of him, noting he was a drum major for the Madison Scouts Drum & Bugle Corps and UW-Eau Claire.

And word seems to have gotten out about Milton – 40 or so people applied for Pierce’s job.

“It’s the effort that the kids put in and the support that this community has given the program that has enabled it to grow, and it now has a very positive reputation in the state,” he said.

“It’s one of the topnotch programs in the state. We do everything and we do it really well. We march well. Our concert bands are good. Our solo/ensemble program is good.”

“That all builds off of what we do in class,” he said.

Next year, construction of the new band room will be done, allowing the entire band to be in one band room to practice.

Is Pierce sure he wants to leave?

The atmosphere there, with about 270 kids in school, will be a lot like Milton, he said.

“Milton didn’t feel like a big school,” he said. “It’s more of a family atmosphere. Even if you don’t have a kid in class, you know who they are in the hallway.”

Participation in the Cumberland music program is huge – like about 40% compared to Milton’s maybe 10%.

“The hardest to leave will be the parents and the kids – and coworkers,” he said. “There’s some great teachers in this building, people that will give their hearts and souls for you. People are truly vested in the community and the school here.”

When asked what he hopes MHS students learned from him by being in band, he said, “I want the kids to look back and think that it was worth the effort to do and appreciate how hard they worked. That their success is a result of their hard work. It wasn’t an accident.

“If they can use that lesson in other aspects of their life, I did my job.”

The Milton Courier spoke to several students to see what they learned from Pierce and what they will remember about him.

“That was always inspiring to me,” she said. “When he had a goal, he stuck to it and tried to obtain the goal and then some.”

Junior Arika Saterbak, a drum major and section leader for the front ensemble and the percussion section, said: “I will always remember how hard he pushed me and the rest of the band because he knew that we could always do better, even if we were doing great. (Never settle.)”

Carly Davis, MHS Class of 2019, played clarinet in band, wind ensemble and pit orchestra. When she was a freshman, she started writing down some of the funny things Pierce said during marching band.

"He has this talent for saying really inspiring quotes while joking with us in the same breath," she said.

By spring of her senior year, she had enough quotes that she self-published them in a book and sold them to raise money for the band to buy sheet music.

Davis said students knew him on a personal level while maintaining distance to respect him as an educator and director.

"He treated us like people, not like kids, and I think that's a big reason why the band was so dedicated to concerts and competitions," she said.

She remembers Pierce encouraged her to work hard for herself and for others.

"That's really shaped the person I am today outside of school," she said.

Hearing these comments, it seems Pierce indeed did his job.