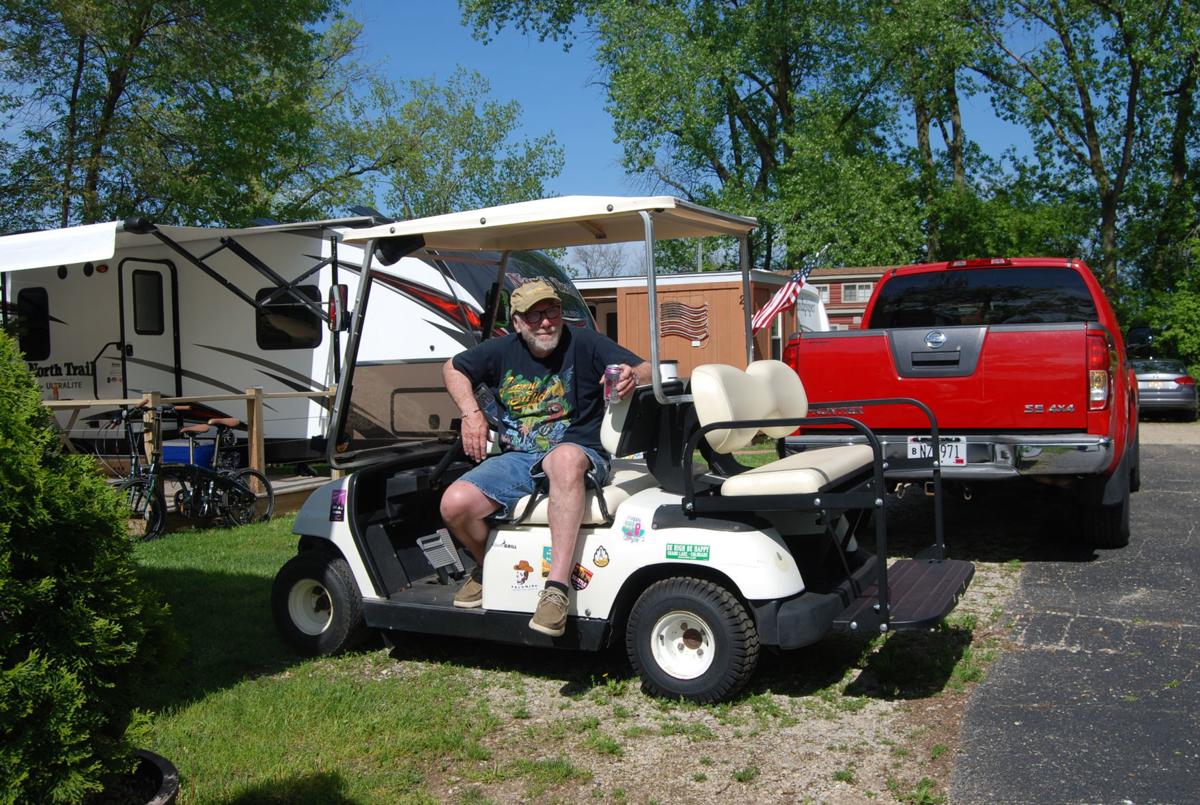 Lakeview camper Jamie McFarland, Racine, greets neighbors from his golf cart Sunday. McFarland said he feels safe from COVID-19 at his campsite and on his boat, but does not plan to visit the campground’s bar and grill. 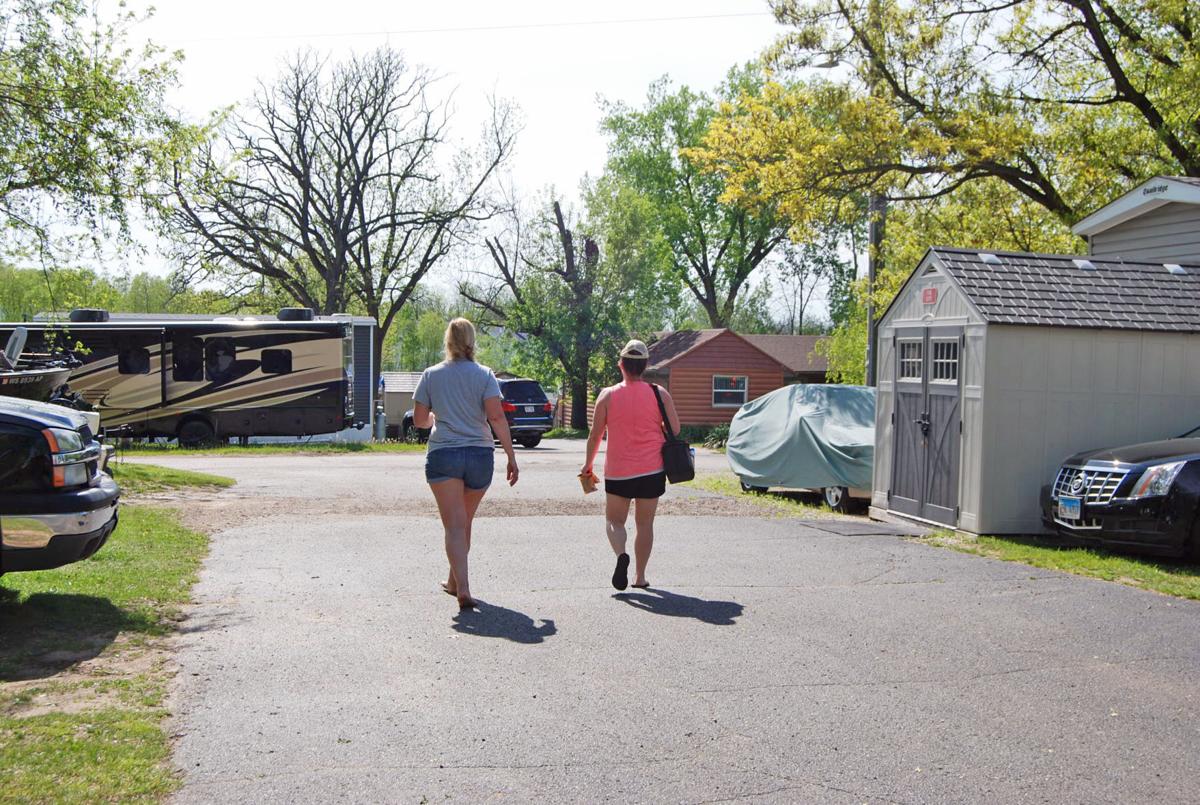 Enjoying her first season as a Lakeview camper, Jen Macek, Rockford, at left, and her guest leave the campsite headed for the pier. Macek said she was taking COVID-19 precautions to stay safe while enjoying time on her jet ski. (See related story Page A5.) 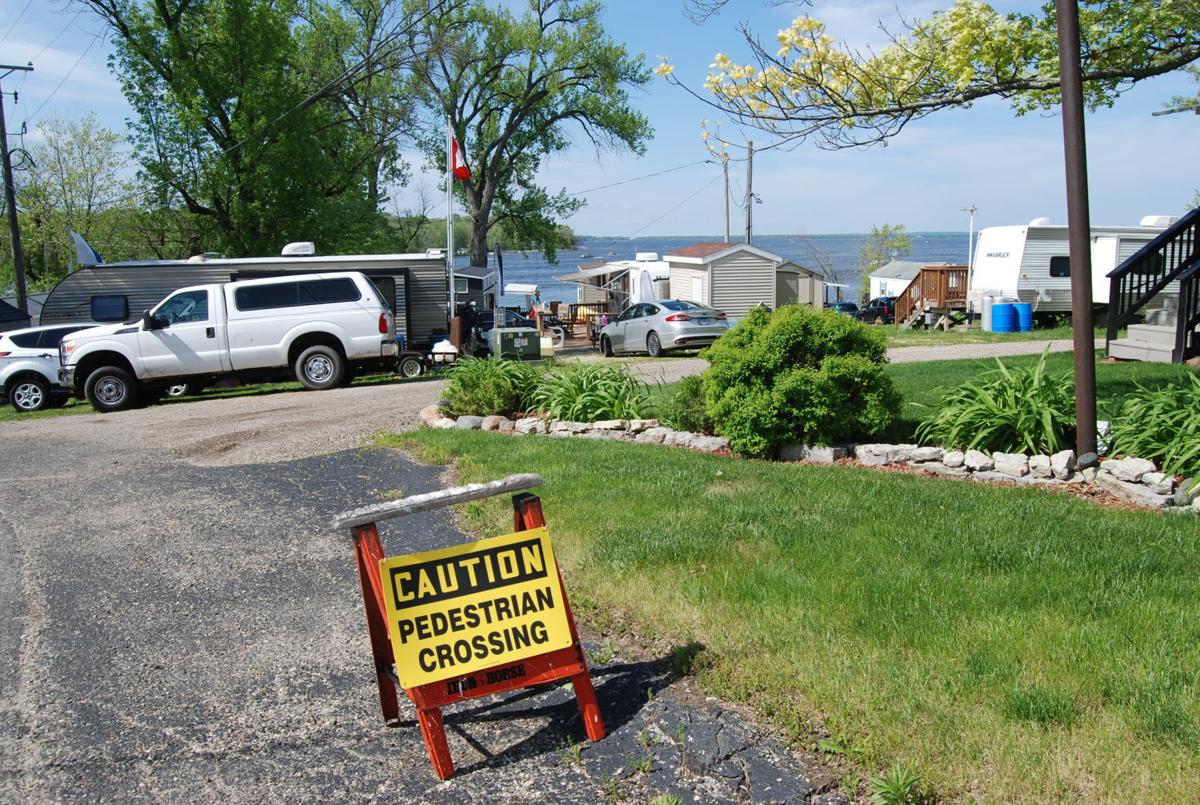 A sign at Lakeview Campgrounds, Newville, reminds motorists headed to the bar and grill that campers have returned. 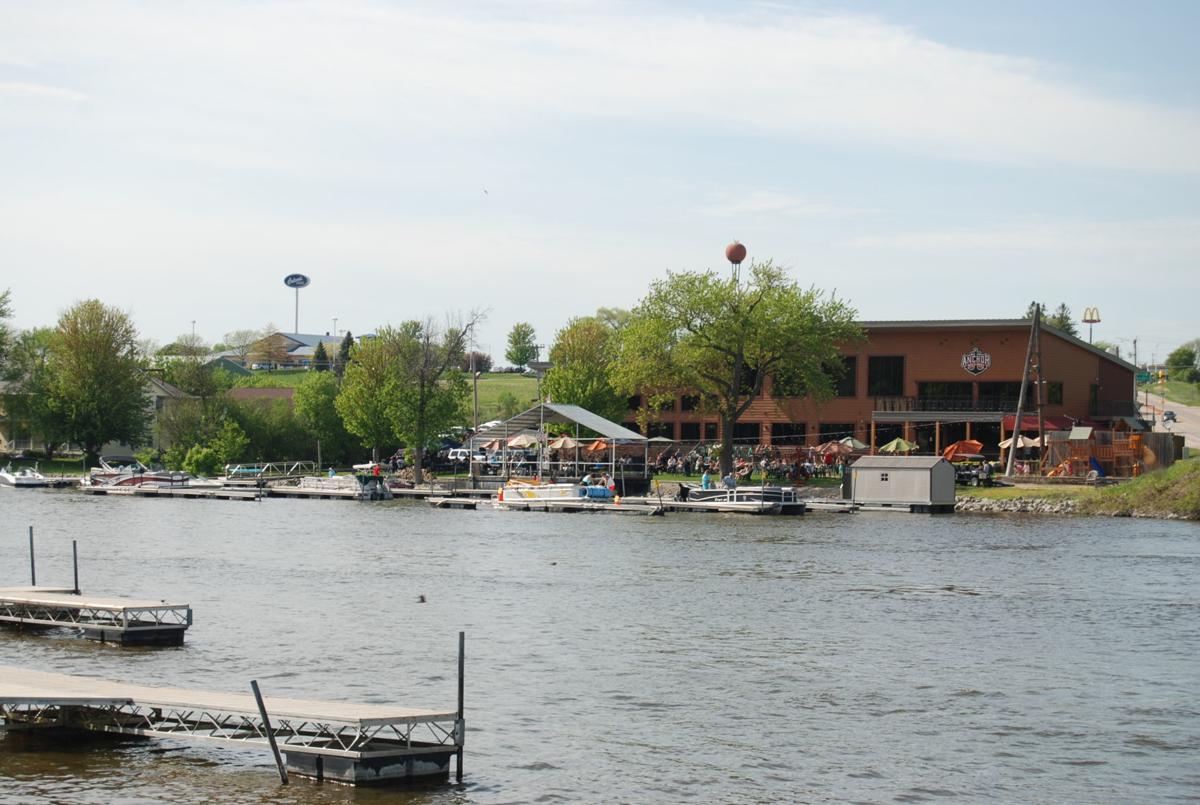 Viewed from across the Rock River, a band performing Sunday on the Anchor floating stage attracts an outdoor audience. 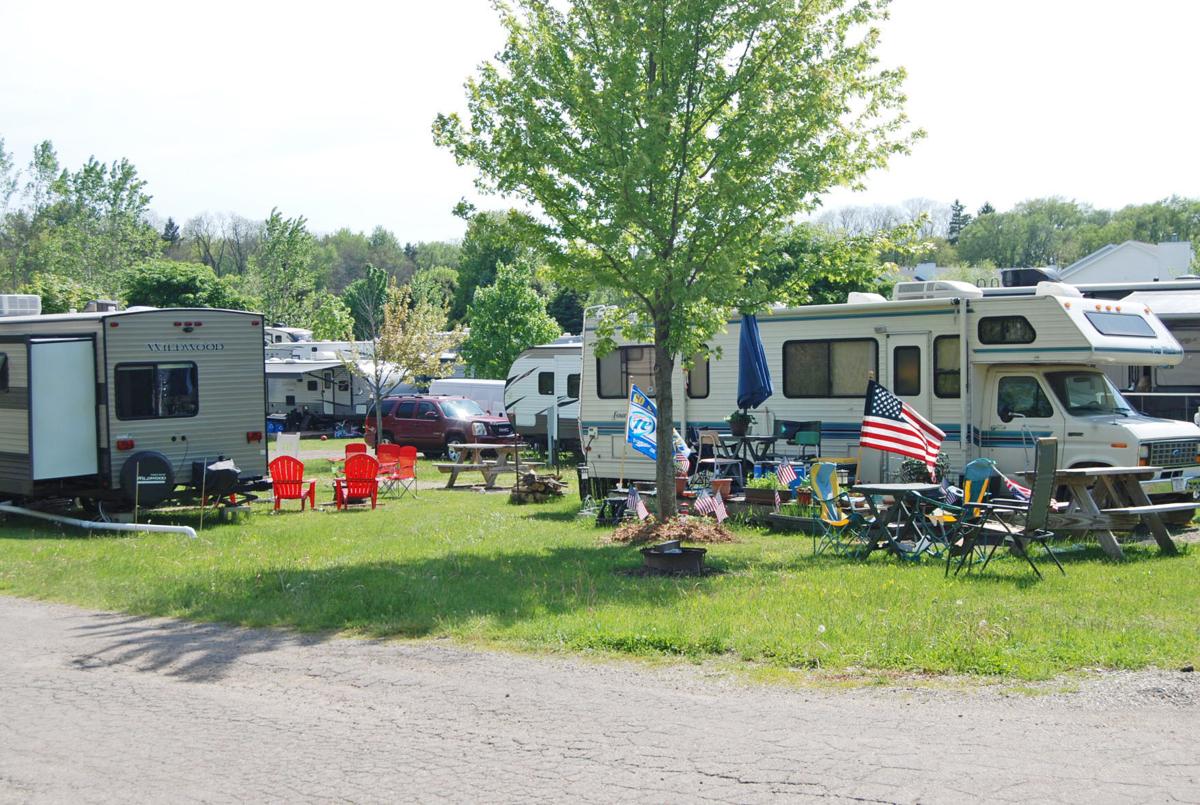 RVs and park model homes line the roads within the 11-acre campground. Some 90 campsites are included within Lakeview.

Lakeview camper Jamie McFarland, Racine, greets neighbors from his golf cart Sunday. McFarland said he feels safe from COVID-19 at his campsite and on his boat, but does not plan to visit the campground’s bar and grill.

Enjoying her first season as a Lakeview camper, Jen Macek, Rockford, at left, and her guest leave the campsite headed for the pier. Macek said she was taking COVID-19 precautions to stay safe while enjoying time on her jet ski. (See related story Page A5.)

A sign at Lakeview Campgrounds, Newville, reminds motorists headed to the bar and grill that campers have returned.

Viewed from across the Rock River, a band performing Sunday on the Anchor floating stage attracts an outdoor audience.

RVs and park model homes line the roads within the 11-acre campground. Some 90 campsites are included within Lakeview.

Many were outside enjoying the holiday over the Memorial Day weekend. On Sunday, with picture-perfect weather, recreational hot spots in Newville were in full swing.

A band played from a floating stage in the Rock River at the Anchor, as bar and grill customers gathered outside, and boat rental customers launched from the pier.

A grassy area used for parking by boaters launching from Harbor Recreation, a marina located along the Rock River, was full, as was the parking lot at Lakeview Bar and Grill.

At Lakeview Campgrounds, campers Jamie McFarland and his companion of 10 years, Marianne Lawson, both from Racine, were tooling around in a golf cart.

Before making the trip, McFarland said, he did “give it some thought” about whether they would feel safe from COVID-19. He was nervous about coming, he said, but “it worked out well.”

He said he feels as safe in the campgrounds as he feels at home.

While McFarland was not wearing a mask outside, he said he wears one in stores. Adapting to COVID-19 precautions is necessary, he said, because: “We will be at this for a while, so we might as well learn to live with it.”

He plans to continue visiting the campgrounds this season as long as he feels safe, he said. He feels safe in his RV and on his boat, “but as far as us going to the bar, that’s pretty doubtful,” he said.

Jen Macek, Rockford, is a new resident of the campground. She and her fiancé took ownership of a unit this year. This is the couple’s first experience with park model camping, she said.

Macek and a friend were visiting the campgrounds Sunday. It was Macek’s second weekend at the unit, she said.

“I am doing everything I can to be safe. We are not hanging out at the bar,” Macek said. Most of the day had been spent on her jet ski, she said.

She was not wearing a mask, but said: “I wear a mask when I am in public places. I also think it’s really important for people to be outdoors.”

She feels safer at home than at the campground, because, she said: “In Illinois, it’s stricter.”

On Thursday, May 21, after learning that Rock County had lifted its safer-at-home restrictions, Lakeview restaurant and campgrounds owner Jake Pettit said he was making plans to accommodate his Memorial Day weekend customers.

With his restaurant closed to business other than takeout since March 17, Pettit was looking forward to opening, he said.

Closing the bar and grill immediately impacted revenues, he said. Camping revenues were less affected because that business is seasonal, he added.

While winters are always slower, he said, before COVID-19 precautions were adopted by the state, sales “were on an upswing,” he said.

“The campgrounds had a couple of people that came back on March 1. We have a lot of snowbirds that come back usually around the end of April, but a few came back early.

“They were afraid to get stuck, and a lot of them are from this area originally. They are GM-ers, and they live campground-to-campground, so they might have a park model here, and another one somewhere else, in Florida or Arizona, and they use them as their residences seasonally,” Pettit said.

Lakeview has 90 campsites on 11 acres. The season typically runs between April 15 and Oct. 15.

“That’s when we turn the water on,” Pettit said.

When a few campers expressed an interest in coming back early, Pettit said he contacted the county health department.

“They said it would be ok as long as they quarantined themselves for 14 days and brought their own groceries. Everybody was told they had to follow the guidelines of the state they were coming to.

“Since about the last two weeks, we have been filled at about one-half capacity,” Pettit said.

The bar and restaurant business brought bigger challenges, he said.

Takeout business was slow. Weekends were better than weekdays, he said.

“When we went to takeout only, we cut down on our staff. We tried to keep six of our year-round staff with hours,” he said, adding that over the winter, he usually employs about 30. During the summer, that number increases to 75.

“Keeping the six with hours was not easy because sales were so low, but generally our season doesn’t start until Memorial Day, so we are used to being slower in the winter, but don’t get me wrong, it was definitely a struggle,” Pettit said.

As he tried to make due with takeout orders, Pettit said his thoughts then were: “If we miss out on the whole Memorial Day weekend, that would be devastating.”

With Memorial Day weekend back on, Pettit said, his next challenge was getting staff to return.

“They wanted to stay home because they were afraid of getting the virus or bringing it home, and the order has switched so many times people are confused, and they just don’t understand what’s going to happen. There is a lot of confusion around the COVID specs in general,” he said.

Usually, during the months of March through May, Pettit said, he would be staffing up and training new hires.

Preparing for the holiday included stocking up on sanitizers and protective gear for staff. Tables inside and out of the restaurant would be spaced farther apart.

Some food products, like meat, during the state and county safer-at-home orders had become harder to find, Pettit said.

“During the shut down, we were able to get frozen meat and we ordered in bulk,” Pettit said, adding that he sometimes had to look for new sources.

“At this point, we have found everything we need, but we did have to search for it,” he said.

With takeout sales only, money was tight, Pettit said.

“We did apply for a business loan and we did get one, but we have not used it yet because we don’t qualify to be forgiven,” he said, adding that fluctuations in seasonal employment made it hard for seasonal businesses to qualify for forgiveness.

Said Pettit: “The virus is not going away. We are doing our best with sanitizing, hand washing and hygiene, and social distancing. We are still serving food in covered containers, and we have masks and gloves here.

“This morning was the first time we could have people. We had some people who came in and ordered lunch and they sat outside.”

About wearing masks, he said: “People are split in the middle all over the spectrum. Some don’t want to work and some say they are over it and want to work, and customers are the same way: some are so worried we take their food to their cars and others are eager to get back.”

Pettit said he does not wear a mask, but plans to stay diligent about hand washing and social distancing.

When people come to the campgrounds, he said some are wearing masks.

“When they come in, their nose is hanging out, or it’s around their neck, or they move it to the side to talk to us. People don’t really get the barrier thing.”

There is a supply of masks in the restaurant for staff members who would like to wear them, Pettit said. There are also some available for purchase for customers, he said.

“We are trying to accommodate everyone. If people are sick or not feeling good, I hope they will stay home,” Pettit said.