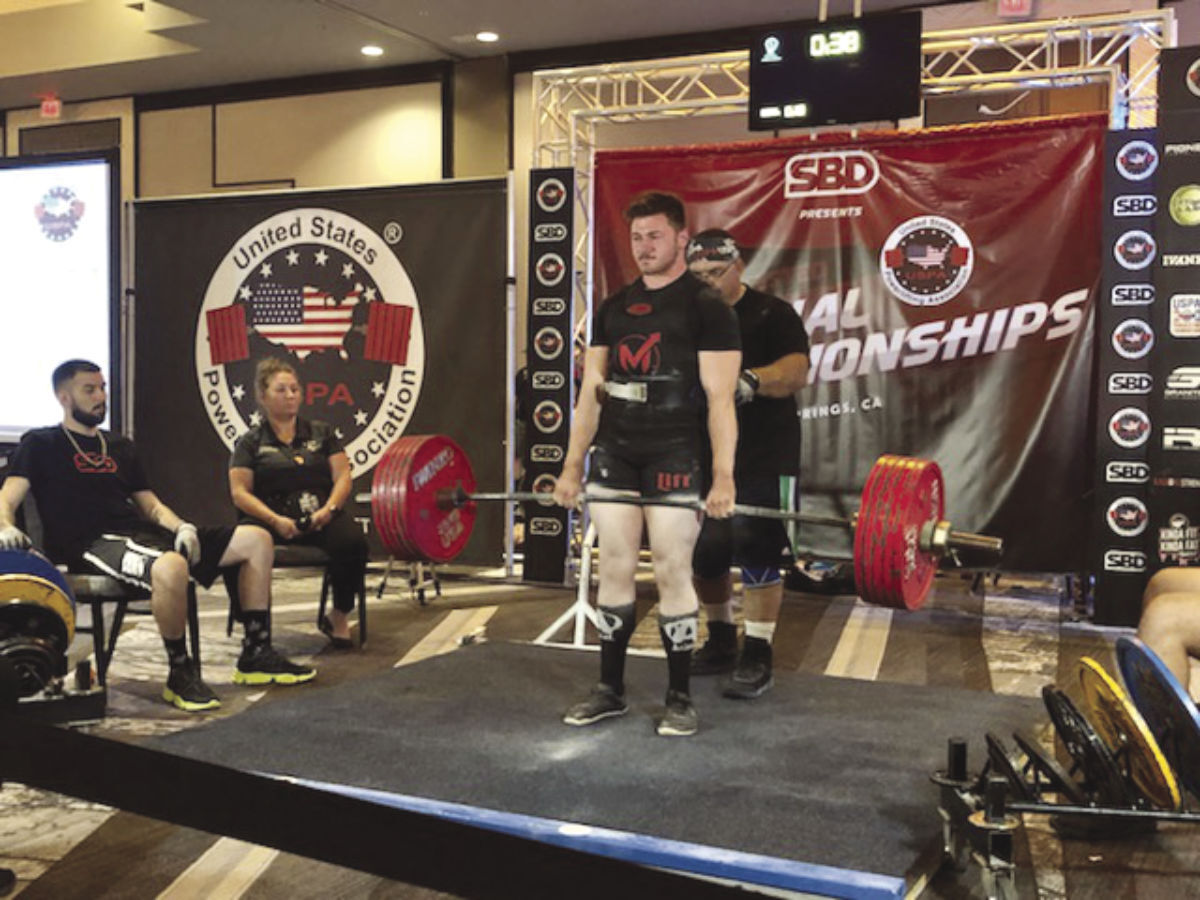 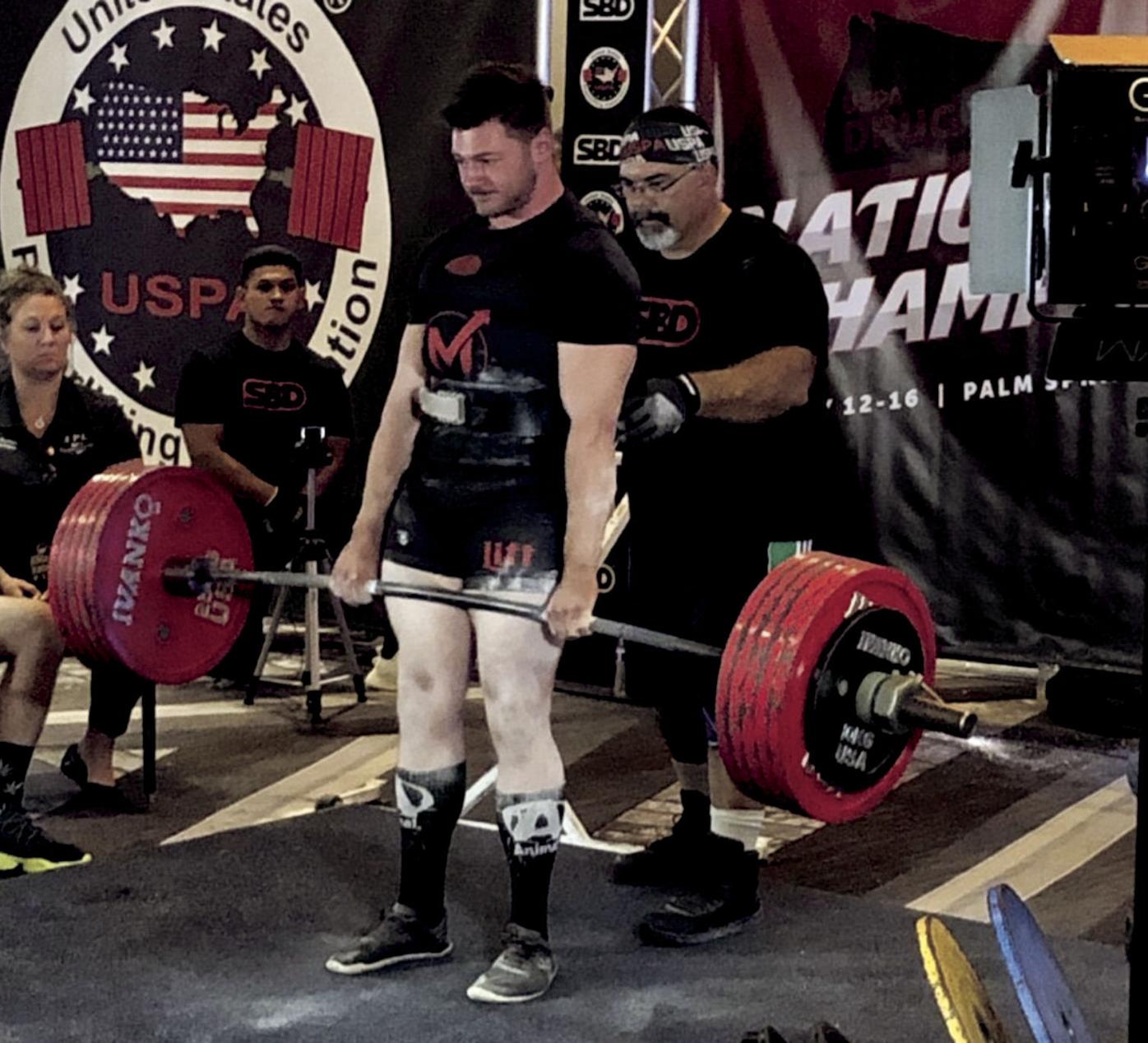 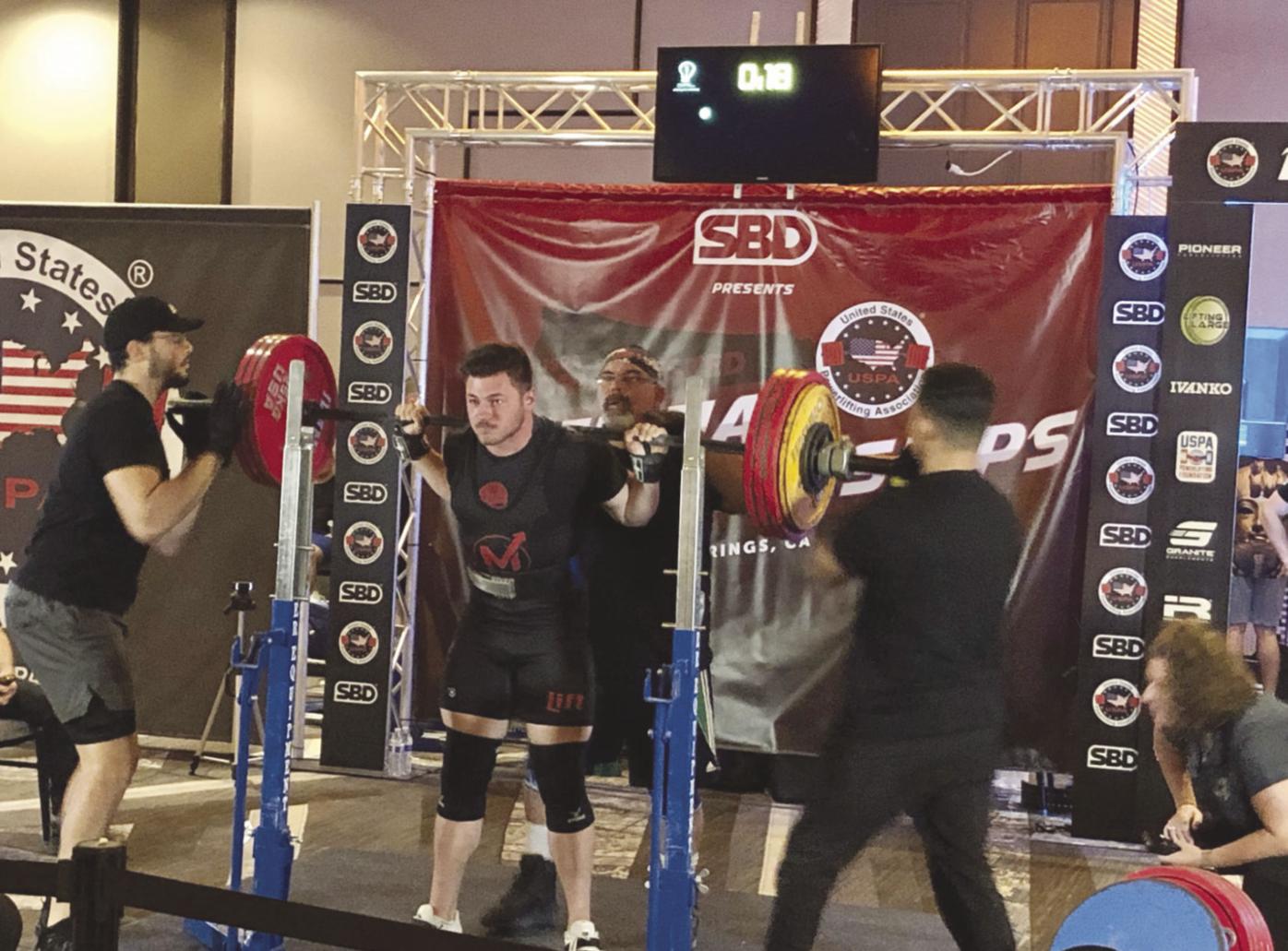 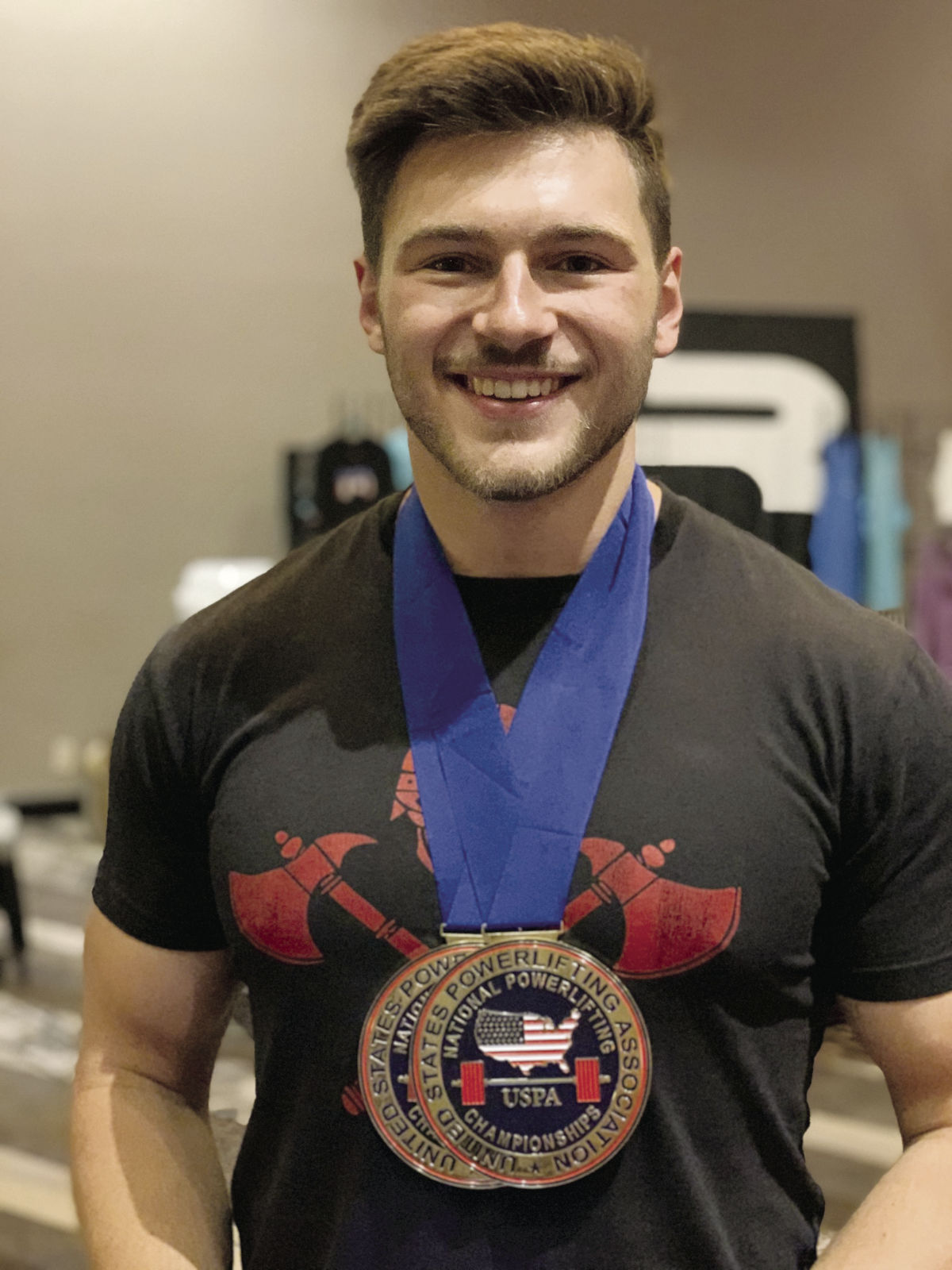 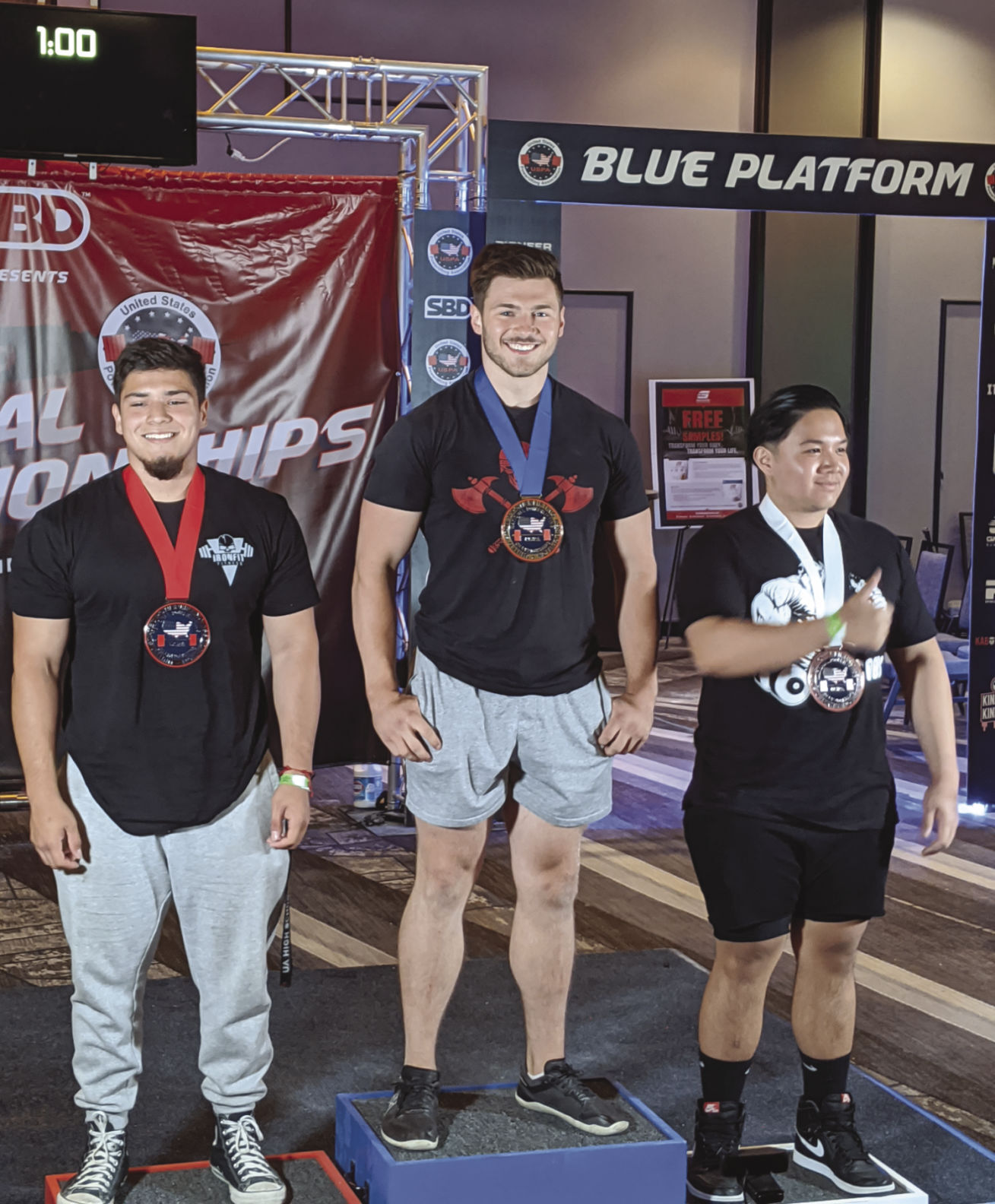 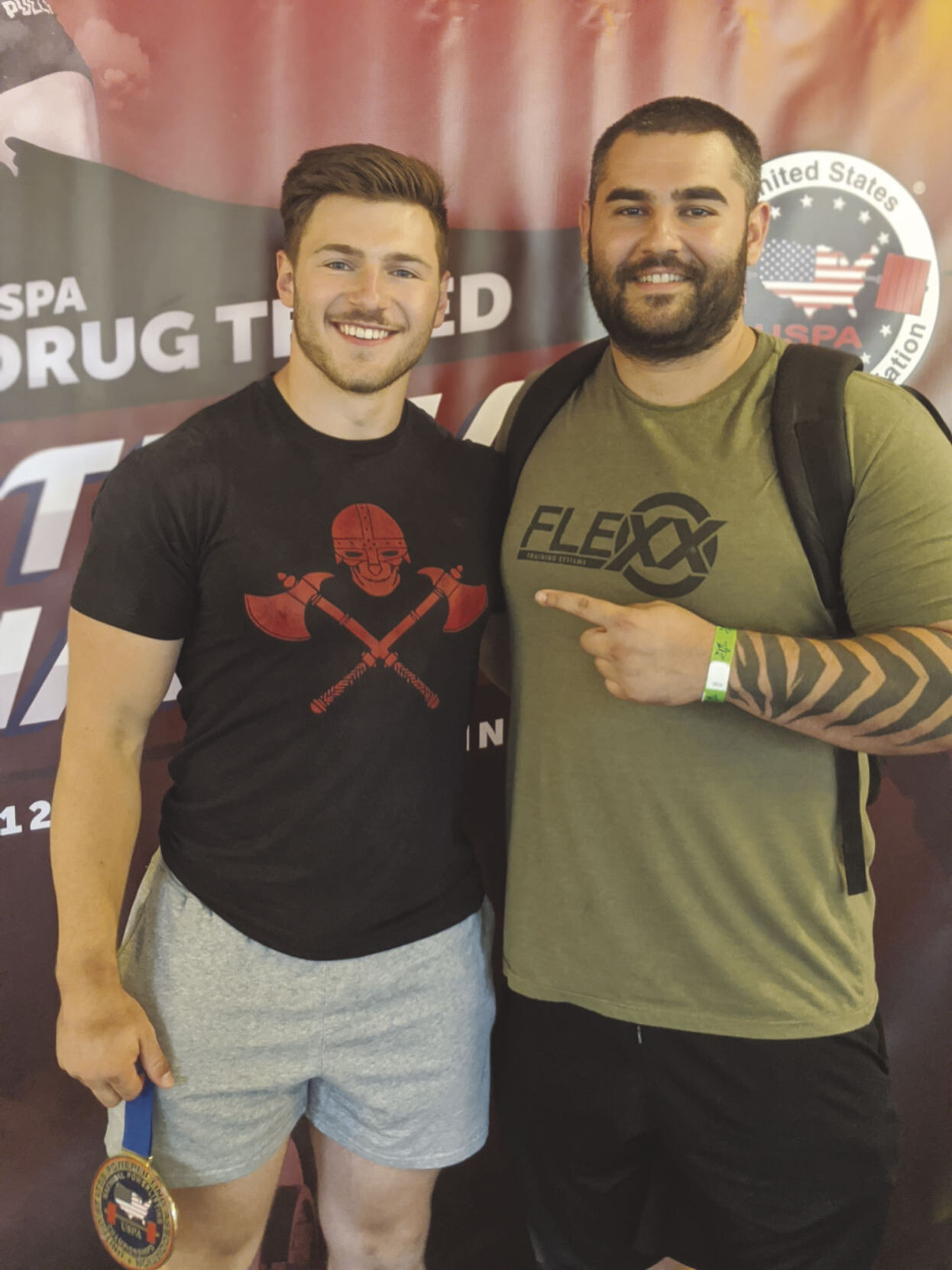 In the Junior Men 18 to 19 Age group and 90kg/198.2-pound weight class, he holds the national record in the Deadlift Only Division with a lift of 636 pounds. That record is from the USPA Drug-Tested Indiana State Championships on Dec. 12, 2020, which qualified him for nationals. He now beat his own record twice.

He broke the record in the Full-Power Division with a 644.90-pound deadlift at the Kabuki Strength Showdown held March 6 and 7 in Louisville.

This month, he topped those records by deadlifting 650.3 pounds at the Drug-Tested USPA National Championships in Palm Springs, California.

Those are the only three competitions he’s competed in so far.

His personal bests were achieved in the Drug-Tested USPA National Championships. Squat: 507 pounds (his third attempt, 518 pounds, didn’t count). Bench press: 352.7. Deadlift: 650.3. Altogether he lifted the most weight (1,510 pounds) and was the gold medal winner in his weight class.

He gold-medaled twice: once for deadlifting in Men’s Raw Powerlifting and once for Men’s Raw Deadlift only. “Raw” means unequipped. According to USA Powerlifting, a non-supportive singlet, belt, shoes, wrist wraps and single-ply neoprene knee sleeves (without tightening mechanisms like Velcro or straps) are allowed.

Before nationals, Richardson’s PB for squats was about 480 pounds. At nationals, he started there, then did 507.

“I have a really competitive mentality,” he said and lifting is a good focus for that.

Lifting, however, wasn’t his first choice.

The son of Scott and Kelly Richardson remembers going to the Parker YMCA when he was in sixth grade. Before he could play basketball in the gym, he said his dad made him lift weights for an hour.

Only later on did it lead to Richardson’s powerlifting passion.

His freshman year at Milton High School, he got serious about lifting. He was on the football and wrestling teams and lifting helped with both.

Then in a December 2019 wrestling match, he injured his elbow. His torn ulnar collateral ligament (UCL) led to surgery in February 2020.

As he was recovering and starting to moving his arm again, the governor issued a Safer at Home order in response to the COVID-19 pandemic.

Putting the best construction on the situation, Richardson said the Safer at Home order and having fewer weights available to him helped prevent him from lifting too much too quickly.

He only had access to what he built in his garage – a squat rack built out of 2x4s. The bar was a 1-inch steel tube that was 7 feet long.

Now, he has almost a full gym set up: squat rack, combo rack, cable machines and 800 pounds of weights.

When he’s not working out at home, he’s at Primal Strength & Fitness in Stoughton.

He said he likes the lifting community and when he goes to the gym, there are guys his age lifting.

“I look forward to seeing them,” he said.

And, he said they encouraged him and told him he had the potential to win competitions by showing him the records for powerlifting.

His coach, Christian Ferratti, lives in California and started working with him to prepare for nationals. Richardson sends him videos. Ferratti suggests how he can improve and sets up his training program and nutrition.

Every Sunday, Richardson does his meal prep.

Breakfast is six eggs with different kinds of meats and potatoes, topped with ketchup.

His pre-workout meal is three packets of oatmeal.

Post-workout is 10 ounces of shredded chicken and two cups of rice topped with BBQ sauce.

Dinner is a half-pound of beef with two cups of rice.

Altogether, his calories add up to 3,000 per day. That includes 210 grams of protein and 300 grams of carbohydrates.

He’s not in to protein powders.

“I’d much rather spend money on actual food,” he said. “It’s more filling and I feel like I get more of my money’s worth out of it.”

When asked his weight, he said he usually walks around at about 210 pounds but slims down to 198 for meets.

He’s looking at doing another meet in November in Kentucky.

“From there, I’m just going to keep getting stronger and work with my coach,” he said.

When he’s not lifting, works at his parents’ bar and is a youth worker for a company called BIG. In fall, the 2021 MHS grad is looking at studying electrical maintenance at Madison Area Technical College.

A story about Josiah Richardson first appeared in MHS Today, the student newspaper of Milton High School, and was written by Kellen Ryan. The story was updated for this week’s paper.

Distinct from weightlifting, a sport made up of two lifts: the snatch and the clean and jerk, where the weight is lifted above the head, powerlifting comprises three lifts: the squat, bench press and deadlift.

Each competitor is allowed three attempts at each lift, the best lift in each discipline being added to their total.

The lifter with the highest total is the winner. In cases where two or more lifters achieve the same total, the person with the lightest bodyweight wins.